As it had been at least a month since we’d been on a beach we thought that it was high time to head back and spend some time on the horizontal before heading to Nepal. We had several options of how to get to Varkala; either by various combinations of trains and buses or a tuk tuk the whole way but the cost difference turned out to be minimal so we opted for ease and spent an hour and a half wedged in the back of a tuk tuk, whizzing through the backstreets to reach Varkala beach.

This was mid-March, so the end of the tourist season and a touch toastier than peak season but a good deal quieter. We were glad of this because we are simply not cool enough nor energetic enough to be there when it is in full swing.

The guesthouses, hotels and restaurants in Varkala are set out along the clifftop path with a fairly perilous drop to the beach below. 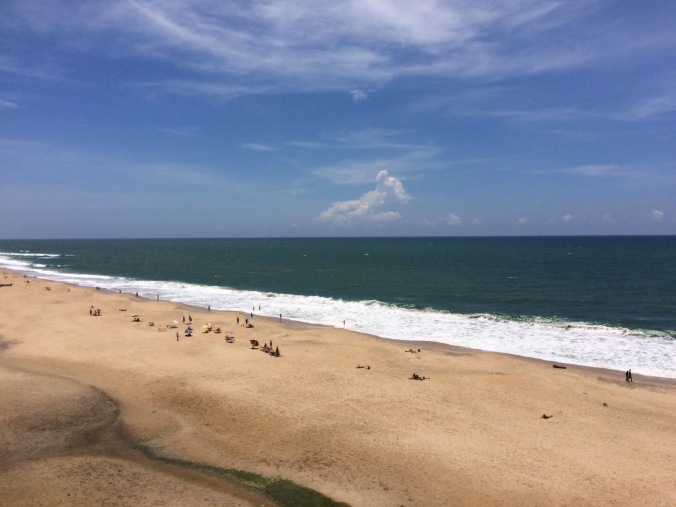 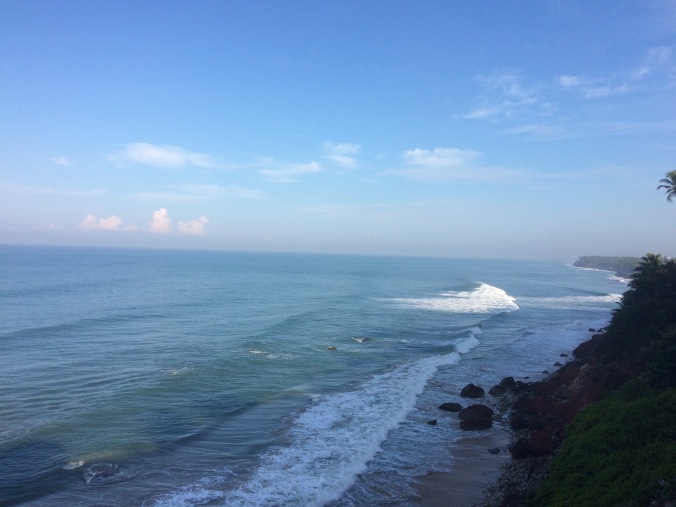 Our hotel, Divine Bliss Beach Resort, was fairly quiet and we were able to extend our stay on a day by day basis rather than booking in advance. It had an interesting décor which was heavy on the dark wood panelling but the bed was comfortable and the air-conditioning was very effective. Our room also provided the next example of “Indian engineering to make you smile”: the water outlet for the air-conditioning came in through the bathroom wall and rather than plumb the pipe in they had decided to simply let the it hang down the wall and drip all over the floor. The logic here was, presumably, that the bathroom was a wet room anyway and so the water would drain away. We can’t fault the logic although it did mean that the bathroom was constantly flooded with freezing water. We came up with an Indian solution to an Indian problem with the conveniently provided shower bucket.

Overall, the hotel was completely fit for purpose and comfortable enough to pass the afternoons when we’d had enough sun.

Varkala beach was definitely a good place to unwind and we used the time to relax for a bit, eat some good food and plan the next stages of our trip. Our days generally involved a morning yoga session at Yoga with Haridas, breakfast at one of the many restaurants, some beach time, a bit of blog writing and trip planning and then out for dinner in the evening. We would also throw in the occasional spot of shopping in one of Varkala Cliff’s many, many, many clothes and souvenir shops.

The yoga sessions were really great; they were first thing in the morning so it wasn’t too hot and we felt unreasonably justified in eating whatever we wanted afterwards. Our teacher, Haridas, had much greater confidence in our abilities than we did and had us both standing on our heads, something that we completely failed to do on the one occasion that we have dared to try it since.

We were in Varkala for 5 days and made the rounds of a good number of the restaurants. Our recommendations are at the end of this post but there were a couple of notable moments that we would like to call out here. The cliff backing along the beach does make for a breathless climb up for lunch, but it also makes the beer at the top that much more rewarding. The rules around service of alcohol on Varkala Cliff are fairly murky, it used to be that it wasn’t meant to be served in any but the most expensive hotels, which hold specific licences, but apparently this has been lifted now. Regardless, in many restaurants you won’t see beer on the menu but check with the waiter because it may still be available. If they do have beer it will be served to you in a stone tankard and you have to keep your bottle under the table. 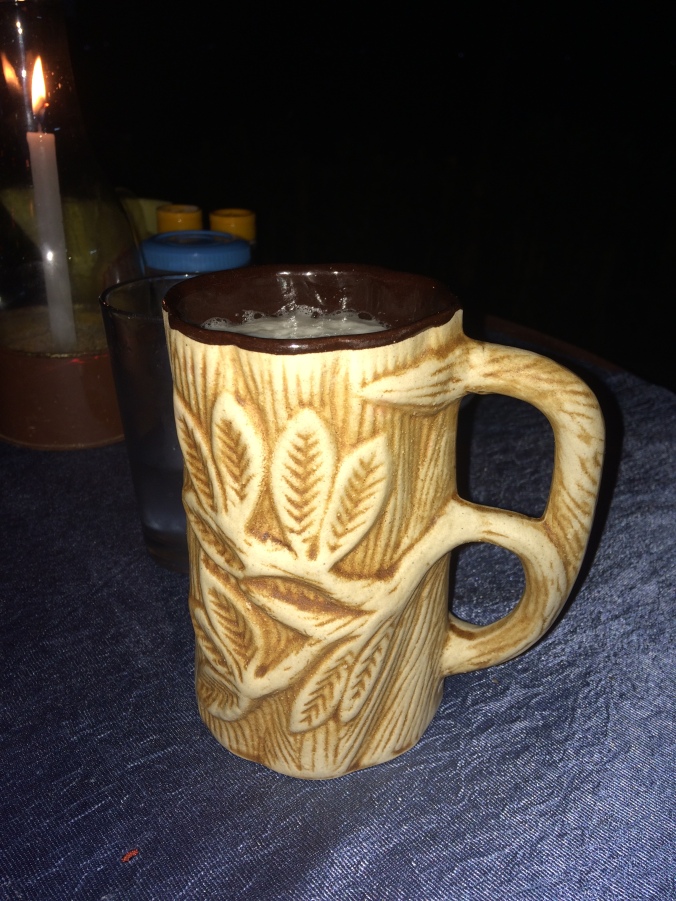 As we walked the cliff at night trying to find somewhere to eat we were encouraged in to every single restaurant we passed by eager waiters, it was the off-season so there was stiff competition for few punters.  We used tripadvisor and Lonely Planet to help us out but sometimes we just went with gut instinct and when one of the restaurants was advertising a Bollywood dance night we simply could not resist. When three children in sequin tops took the stage, however, we started to feel like maybe we had been a little bit misled.

They weren’t the world’s most spectacular dancers but they weren’t half bad and when they were joined by the adult contingent of the troop it turned in to a pretty good show all round. They were obviously having the time of their lives as well, which made for a fun evening for everyone.

Now on to the important bit; the beach. Aside from the southernmost end of the beach, there are no restaurants or bars on Varkala beach, just a bunch of guys with stacks of sun loungers and shades. So, the beach is nicely uncluttered and also surprisingly free of people trying to sell you necklaces and cheap sunglasses although on one day there was a woman sat 10 metres away from us continuously shouting “pineapple, coco, watermelon”, which is in no way irritating after a couple of hours.

Now for the negatives: the beach would have been drastically improved by the removal of the mountains of rubbish at the bottom of the cliff. As far as we could tell all of the rubbish from the cliff top path was simply swept over the edge, which meant the beach and the sea were also covered in rubbish. On the first day James got a plastic bag wrapped around his leg in the sea and that was that for his sea time for a couple of days.

To be fair, we did see a team of ladies cleaning the beach one day, but it would take an enormous clean up team to make a meaningful difference.

Nonetheless, we enjoyed our several days on the beach and James’s misfortune with the plastic bag seemed to be an isolated incident as Caro spent many happy minutes jumping around in the waves without any issues. The waves are worth mentioning though, there were times where they crashed down on the beach and we neither of us were keen to venture in at these times, despite being confident swimmers. The final thing that you need to make your peace with is the presence beach dogs, which wait for you to be comfortably settled on your sun lounger before taking up residence underneath in the shade. 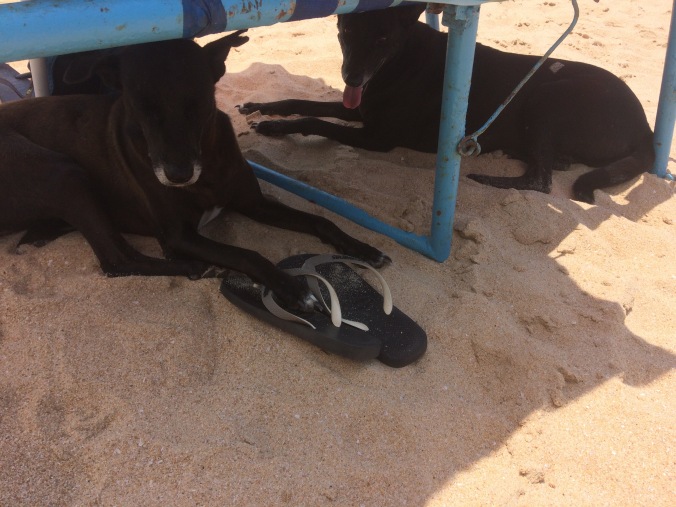 Nepal was the next destination and to get there we had to overnight in Delhi due to the timings of our flights. Once again, we weighed up the different transport costs and paid a bit more to get a taxi to the airport rather than messing about with buses and trains. (We have taken the attitude of being very conscious of the budget but also spending a little bit more when it makes sense to do so). The taxi driver took the coastal road to the airport which wound through small fishing villages and was probably far nicer than the main road.

Trivadrum domestic terminal can be best described as functional but we managed to pass the time and also avoid the scrum to get on the airplane when the announcement was made for boarding. This scrum turned out to be a complete waste of time as the very people who were desperately eager to get on the plane also stopped at every opportunity to take a selfie with the transfer bus, on the bus, with the plane, on the plane steps, in the plane and pretty much everywhere apart from the plane toilet and probably there too if we are honest.

Back in Delhi, our taxi driver got lost trying to navigate the ridiculous block system but we eventually checked in to our truly horrible but convenient-for-the-airport hotel. As we arrived, the man at reception was blowing his nose on a bath towel which did not inspire confidence for the cleanliness of the linen or the prospect of the “room service” dinner that we were restricted to due to lack of other options. He also informed us that the lift was not working “at the moment”, James took a glance as we climbed the steps up to the fourth floor, there was no lift at all, just an empty shaft. The room was actually fine and the hotel, for reasons best known to management, had splurged out on made-to-measure curtains to cover part of the air-conditioner. 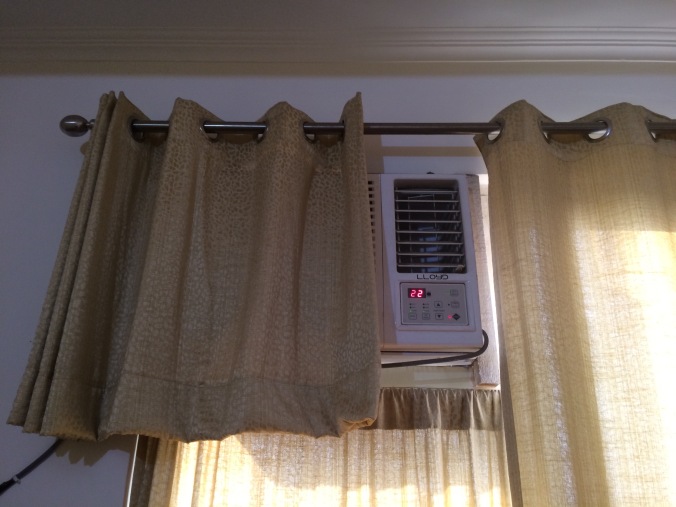 Our fears about room service were realised when we were presented with the most revolting “curry” that we have encountered. It arrived in plastic bags, which is pretty standard with Indian takeout, but unappetisingly held the shape of the bag once decanted.

This truly would have been a sad end to our Indian adventure but fortunately we will be returning to India for a bit more beach time after exploring Nepal.

Our feedback on Varkala restaurants

Café Del Mar  – After discovering this place one lunchtime we returned every single day to satisfy our vegetable cravings with their really scrummy spinach salad.

Trattorias – we had one nice dinner here but the breakfasts were what kept us coming back; perfectly made banana porridge, nice tea and excellent coffee and a couple of perfectly boiled eggs.  The restaurant also opened early so we were able to go in a 7am on our last day before getting our taxi to the airport.

Darjeeling Café – Home of the “Bollywood dance night”, the fish curry was very nice but the smell of incense can be quite sickening. We asked them to get rid of the incense stick but quikcly learned that it was masking the smell of sewage so pick your preferred demon.

Abba Restaurant – this place didn’t rate highly on our list. They have lots of staff but only a couple who actually seem to do any work. The food was fairly average and they forgot part of our order, we eventually cancelled it and then the item still showed up on the bill. Basically, the attention to detail needs some work but we did get a cool picture of a gheko inside a lampshade.

God’s Own Country Kitchen – service was very steady considering that they were almost empty so only visit if you aren’t in a rush. The fish sizzler was more show than flavour, although this is probably standard, the calamari thoram was very yummy and morish.

Clafotti – It was fine, we had nice fresh fish and the service was good. The place was a bit lacking in atmosphere and we were surprised it was so high up the tripadvisor rankings but overall perfectly fine.

Juice Shack – We had a couple of really yummy smoothies here and would definitely recommend stopping by for one. The food is only average so perhaps find somewhere else for your actual meal.