In all our excitement at seeing tigers we had not yet been to see the UNESCO World Heritage Site, Ranthambore Fort, which is also inside the National Park and sits atop of a large rock overlooking the park and lakes and making a spectacular backdrop for our safaris.The fort is pretty cool and is in reasonable condition considering it was built sometime between 940 AD and 1110 AD, although the exact date is not known.

Having had such a beautiful tiger sighting, we decided to quit whilst we were ahead and not go for another safari drive the following morning, leaving us with a couple of hours free to go and visit the fort. We had a great time. Often with safaris there is the problem is that you have empty hours in the middle of the day where there is nothing to do (we know, middle class problems right?) but this isn’t true at Ranthambore because you can spend a couple of hours looking around the fort.

Getting there. You can go to the train station and queue to get in one of the jeeps regularly running up the hill but, be warned, locals use this form of transport and therefore local rules apply; as many people as the car can carry without rolling backwards down the hill. It looked utterly terrifying but was a bargain at 50 rupees. We instead paid a whacking 1000 rupees for someone to take us up in his jeep, wait for us for an hour and then take us back down again. Pretty easy money if you happen to have a jeep handy. It is a steep price to pay but as entrance to the fort is free and there is always the off chance that you will see a tiger and other wildlife, we still thought that it was worth it.

It isn’t only tourists visiting, Hindus visit to worship at the temples within the fort and we saw more locals than tourists.

The main inhabitants appear to be monkeys though, the entire place is covered with them and some do have a slightly scary habit of following you around a few paces behind.

We were dropped at the base of a steep climb up the fort entrance. Despite the fort containing an active templ, you don’t encounter the usual of vendors hassling you for your trade and the whole place has a much more peaceful feeling. That being said, when you reach the very top you come across a sort of shanty town, amazingly, people seem to live up here without any services whatsoever and trips up and down bearing heavy loads must be a daily occurrence.

The fort has not been as extensively renovated nor as carefully preserved as many of the other sites that we visited and large parts have not lasted the test of time and the inhabitation of monkeys.  We wandered round taking in the sites and poking our heads in all the buildings. Not a huge amount is known about the history of the fort, as the length of the Wikipedia page will verify. 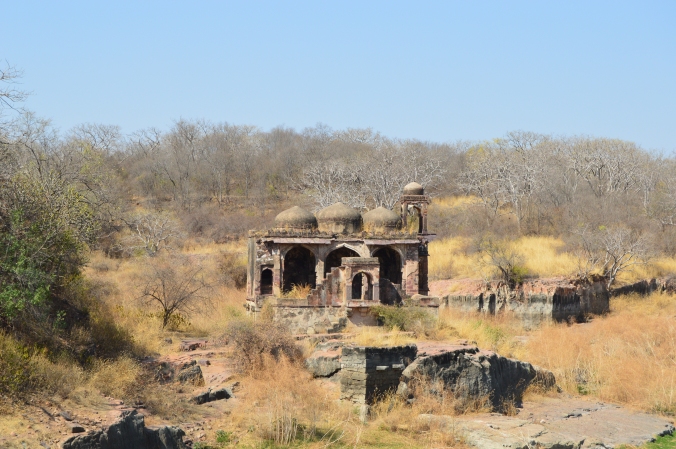 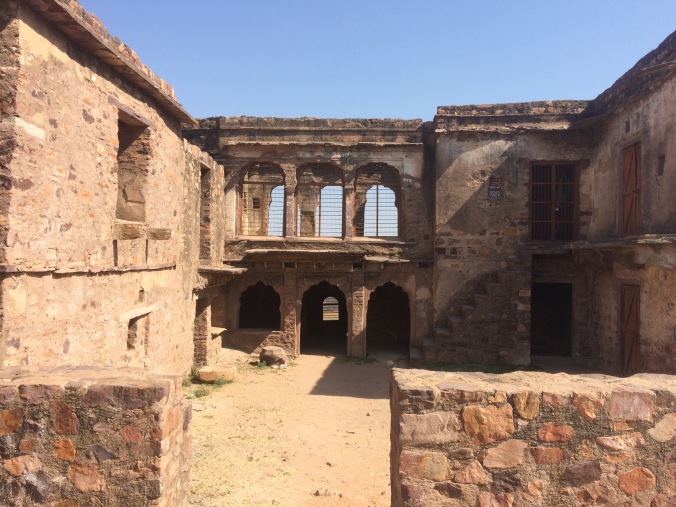 The top of the rock and inside of the fort is huge and you could feasibly walk for hours.

It is definitely worth visiting particularly as something to do between safaris although you only really need an hour to get a good feel for it.

One thought on “A quick word on Ranthambore Fort”