We put the border debacle behind us, camped at a delightful campsite / vineyard just over the border and pushed on early the following morning to make the long journey to Lago Puelo and El Bolsón. The scenery was more what he had imagined of Argentina, less rugged and forbidding than Patagonia with wide open plains fringed by snow-capped mountains with lots of cattle and horses. 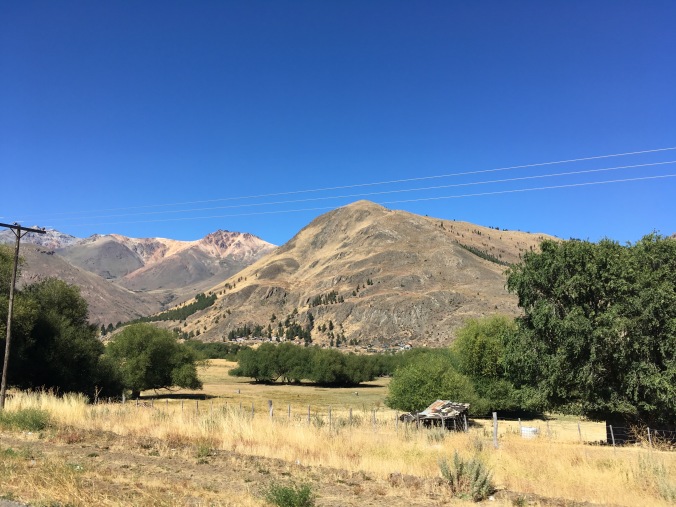 We stopped for lunch in our usual glamorous layby, before carrying on north towards Lago Puelo  National Park just south of El Bolsón. It was Sunday and the sun was shining, so it came as no surprise that the volume of traffic increased significantly as we approached the lake.  It got so busy that we were questioning our decision to stop, but we persevered and once we got down to the lakeshore we found that it was busy but not overwhelmingly so and it was worth stopping by for a few moments to appreciate the scene.

Our original plan had been to camp near the lake, but it was still earlyish and, as we didn’t feel like swimming, we didn’t think that there was much point lingering and pushed on instead towards El Bolsón where we had a couple of days’ hiking planned.

We decided to camp outside of town on our first night, at Camping Alerce on the bank of the Rio Azul. It was a slightly dishevelled camp but pretty good value for money and the location was lovely.

Our first hike was to Cerro Piltriquitrón, one of the peaks that towers above the town. The trailhead is reached by a steep dusty gravel track that you really need at least a 4×2 to get up to the top of, otherwise you add the 10km of track on to your hike; particularly unappealing. 1km into the hike is El Bosque Tallado, the carved forest. The hillside was completely destroyed by fire and the sculptures are a simple but ingenious way of repurposing the area and raising a bit of cash. It’s only a kilometre from the trailhead but it’s steep with views out over the town behind.

We paid the nominal fee and took ourselves on a tour of the sculptures, 55 in total. 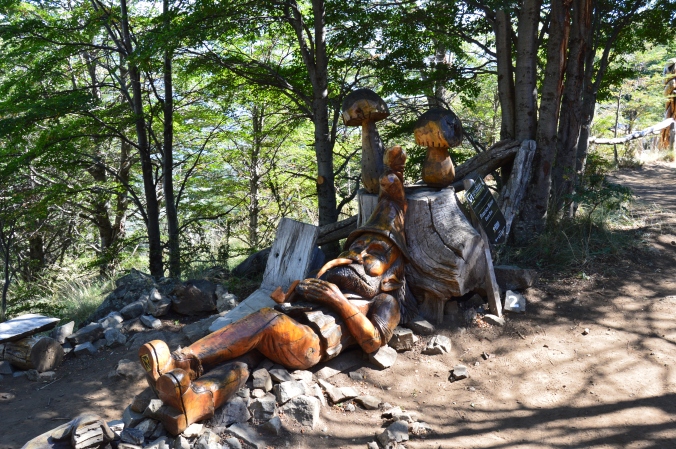 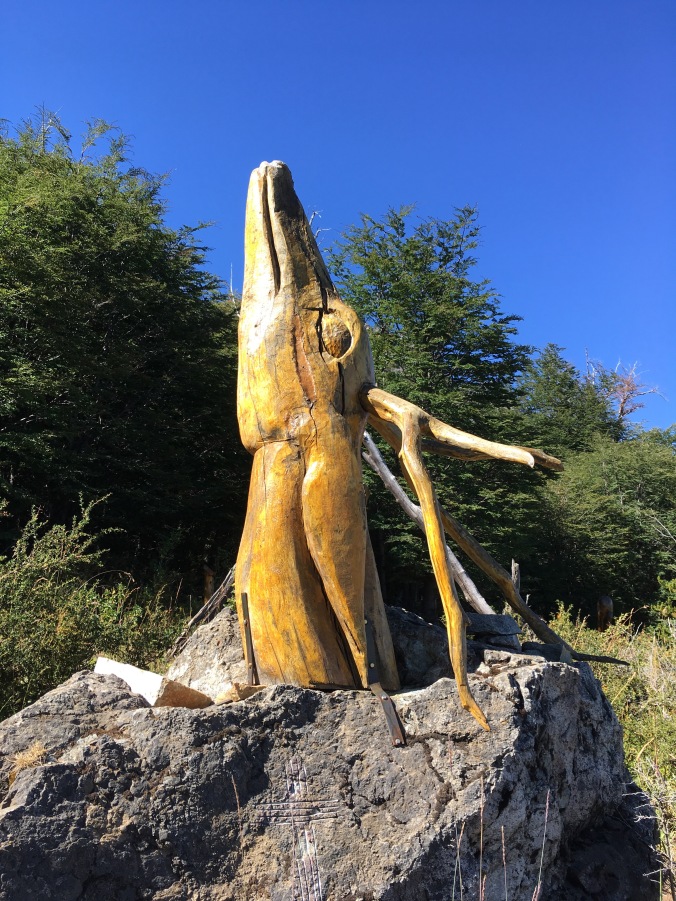 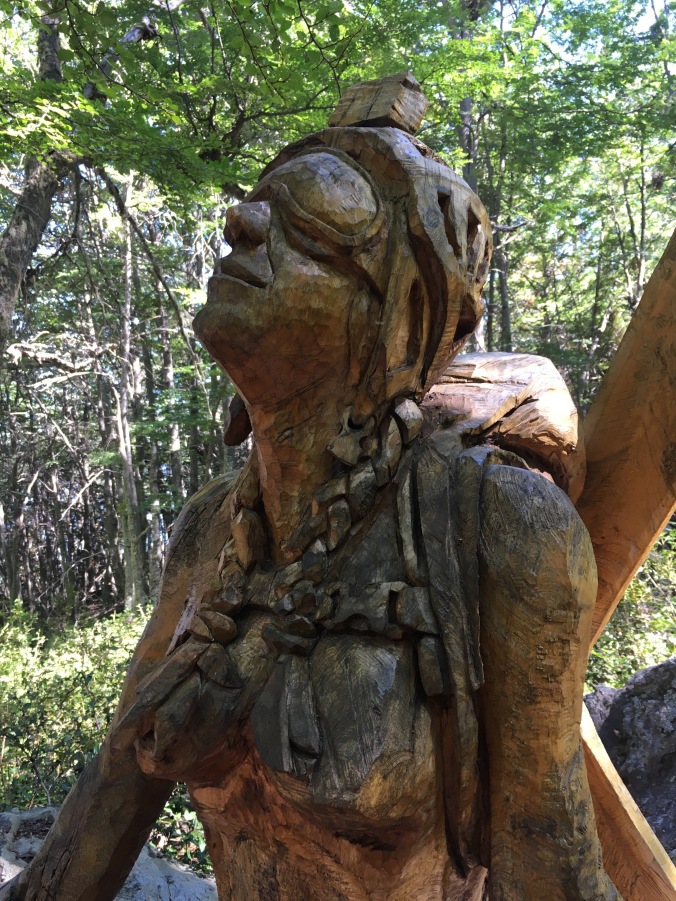 It’s a pretty cool use of a readily available resource and a nice way to pass an hour. We sat with our lunch and looked out over the view. We then did something quite uncharacteristic for us; we decided not to hike any further. It was pretty much straight up to the refugio and we thought that the view, though lovely, would be much the same, so we just didn’t go.

Back in town we found ourselves a campsite walking distance to the town centre. Our campsite from the previous night had definitely been preferable to the sprawling field that we ended up on for the next two nights but we really wouldn’t have wanted to tackle the drive down to the river in the dark, it was a bit perilous. We pitched up and set off to find beer and food. We ended up eating so many peanuts with the various beers that James tried that by the time the restaurants were open we didn’t actually feel hungry. So, we had icecream for dinner instead and walked back to camp. This was our second helping of Jauja icecream and whilst it was tasty we really don’t think that it is up to all of the hype. We are something of icecream experts now and it didn’t compare with Australia or New Zealand and particularly not with Italy.

The second James got out of the tent the following morning he was joined by one of the campsite dogs,  he couldn’t bark properly and absolutely adored Caro. He would get very excited when he could hear her voice from inside the tent. (We have seriously considered re-naming this blog to Caro cuddles dogs around the world) 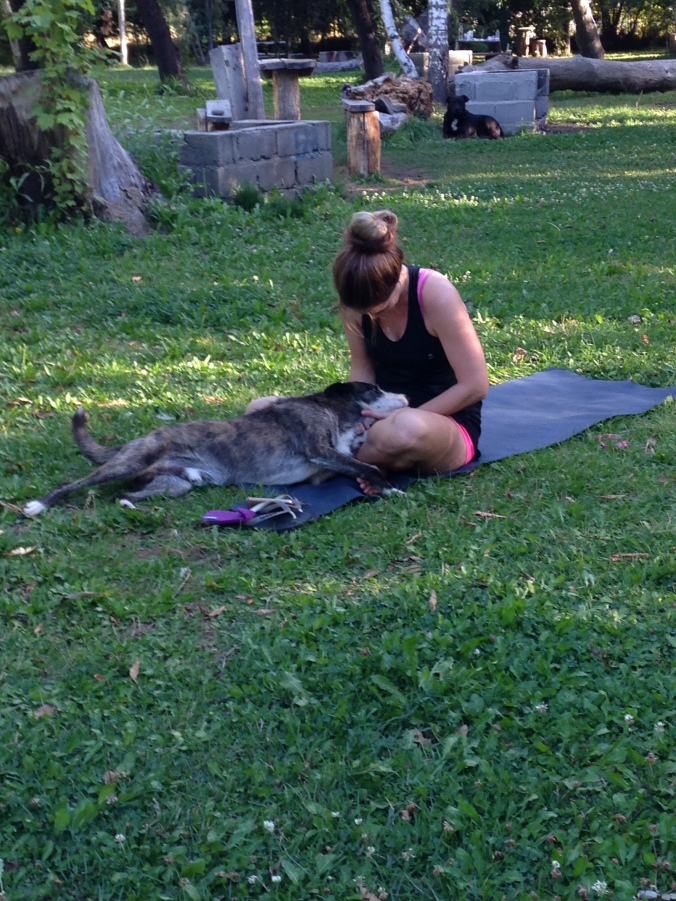 Our second day was dedicated to the Cajón del Azul hike (which we actually completed this time). We drove to the nearby town of Wharton and parked up in what looked like a car graveyard but was ostensibly a car park, registered at the entrance and started down the steep 1.5km gravel track that we were already dreading climbing back up.

Rio Azul and the beginning of the hike proper were waiting for us at the bottom of the track. There is a fair bit of up and down on this hike and we felt as though we were more or less constantly on hills, but it was never overwhelming and the return is easier than the way out. It’s a pretty walk through the forest with occasional long views out to the mountains 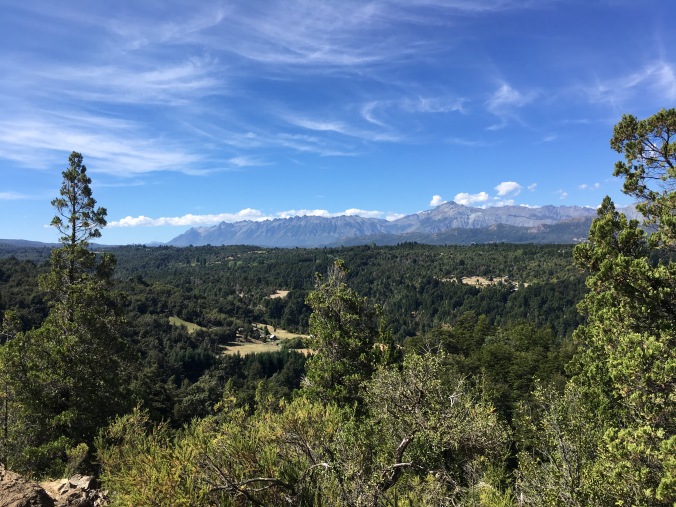 The main attraction of the hike is the river itself, which is an absolutely stunning blue and absolutely bloody freezing.

It takes about 2 hours to walk the 8km to Refugio Cajón Azul, and then things get a bit interesting because the path isn’t immediately clear. We had decided that we would go and see some waterfalls, Cascada Nacimiento, further along the trail and with a combination of maps.me and signs we did manage to get there but we weren’t the only ones looking around, wondering if this could possibly be the right way. The extra couple of kilometres are worth it though because the falls are cool.

Back at the refugio we tried to figure out how to get a look at Cajón Azul itself. Eventually we ended up clambering up to the top where there is a bridge across the chasm that says in no uncertain terms that you should not cross it. The only other option is to take a short but terrifying leap of faith across the gap, which is what the trail markers were telling us to do. We chose the death bridge because James said “it looks ok to me”. (We do not recommend this to anyone, we are fine of course, but there is no doubt that it was a really stupid thing to do)

That being said, the view straight down was pretty cool. 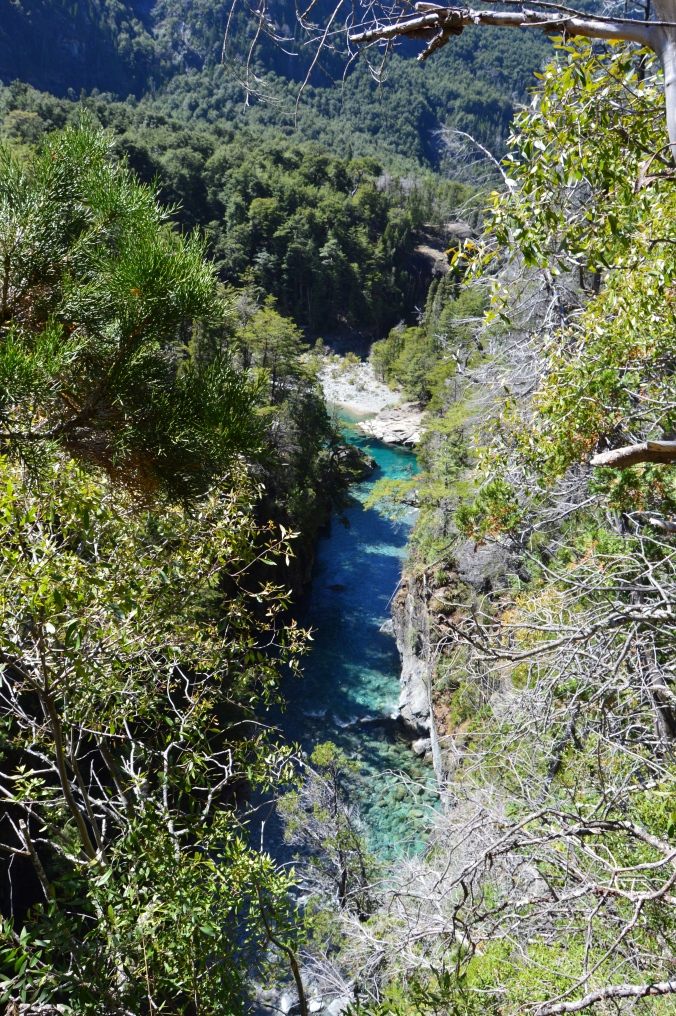 We decided to sit and have lunch right there next to the bridge. This made for excellent people watching, as others, like us, followed the trail, reached the bridge and made the decision. Most chose to turn around, one guy jumped across the gap, no one took the bridge. We sat and watched all this from the far side, not one person asked us how we had made it across. We want to preface this next section by saying that the bridge was the only place that there was a sign, the trail was marked across the gap and it was perfectly feasible that you would make it across and continue hiking. So, we set off along the other side of the canyon. This walk was definitely more interesting with a combination of scrambling and rickety wooden ladders lashed to the side of the rockface.

It was only when we had reached the end of the ladders that we came to the sign advising people coming from the OTHER DIRECTION not to proceed any further. Whoops.

Obviously, we were completely fine and secretly glad that we hadn’t been turned back earlier because the scramble was fun and the views were awesome.

From here we followed the river until we came back down to the level of the water, stopped to dip our feet in briefly before completing the loop and joining the trail back to the start.

As we said earlier, the return journey is easier as there is more downhill than up and even the gravel track at the end was not as torturous as we had thought it would be. All in all, an excellent stomp and one that we would highly recommend.

One thought on “A bit of illicit scrambling in El Bolsón”