We’d used up our time allocated to Parque Pumalín hiding from the rain, so we didn’t really feel like we had been able to get as much out of it as we would have liked but there’s nothing that you can do about the weather. We picked up food for lunch in Chaitén and then set our sights on Futaleufu, our next stop. It kept nagging at us though and we decided that, at the very least, we should pull into one of the camping areas in the southern part of the park to have some lunch and enjoy the now glorious weather. We turned through the hamlet of Amarillo and after many several kilometres driving into the park we found ourselves at Camping Grande, our idea of an idyllic camping area. 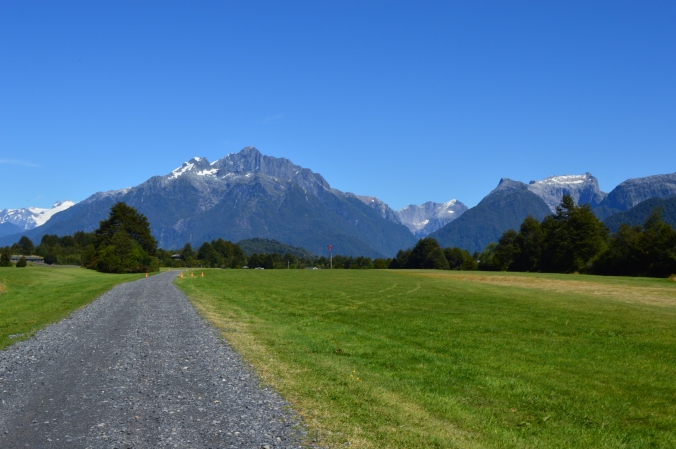 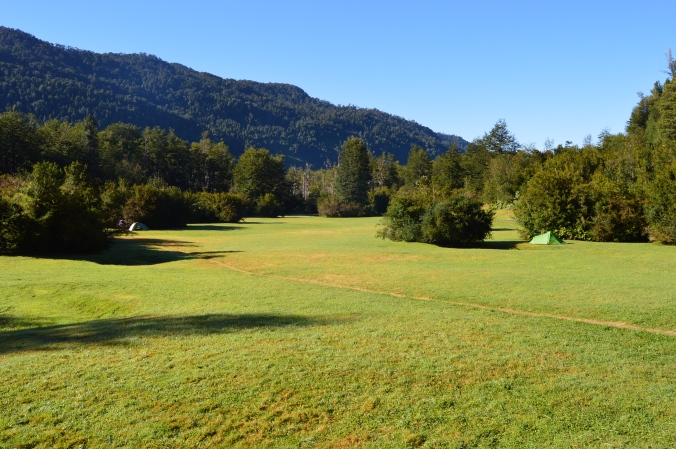 We stretched out on the grass and ate our lunch, admiring the scenery and regretting the weather again until Caro said “bugger it, I think we should just enjoy the afternoon and stay here tonight”. So, we did. Have you ever looked over at your other half and said “it’s been far too long since we nearly froze to death in a tent”? No? Us neither! But, funny thing, that’s what happened anyway. Once again, we just hadn’t expected it; we’d only gone up about 40 metres from sea level, and it hadn’t been freezing the last three nights, so we just sort of assumed that it would be fine after the mid 20s we had enjoyed during the day. WRONG! It was absolutely bloody freezing, probably the coldest night that we had had yet and even Caro’s recently purchased tent blanket failed to keep her warm. The frosted campsite was beautiful the next morning but that did little to make up for the fact that James couldn’t feel his toes until about midday. 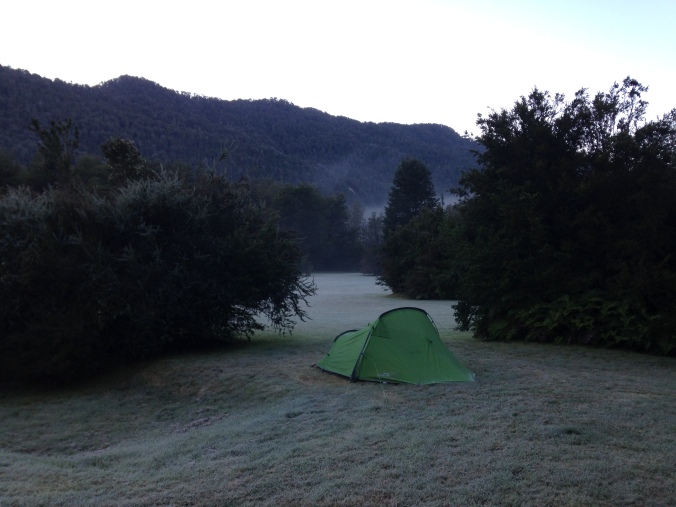 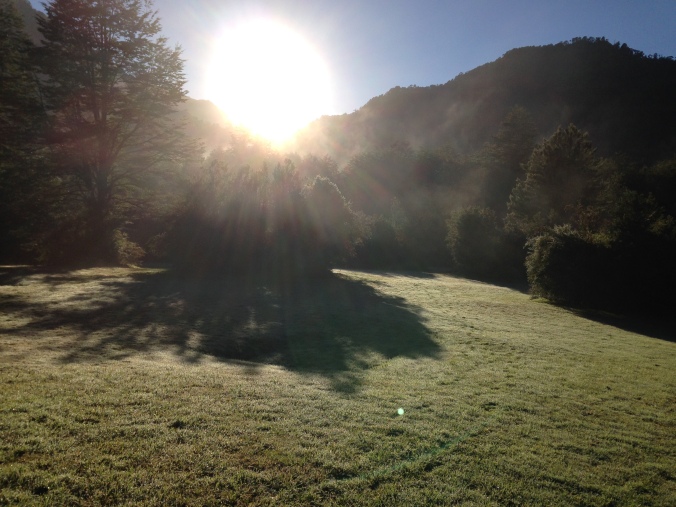 As we crept around in the morning, bent double in a vain attempt to retain some body heat, we could hear the squeals from the bathrooms as clinically certifiable people made use of the cold showers on site. As the sun came over the mountain the whole place gradually thawed, although we were still well wrapped up as we set off on our hike up to a glacier viewpoint. We walked up a near vertical dirt track for an hour with only two thoughts for company; the first being complete incredulity that people actual drove up this thing in the recently passed high season and the second being Caro’s inner monologue about more bastard hills. James can hear it too, despite it being an inner monologue, it’s one of the joys of marriage and also the reason that he remained a safe 200 metres in front at all times.

We made it to the top of the track to be faced with yet another hill up through the forest. 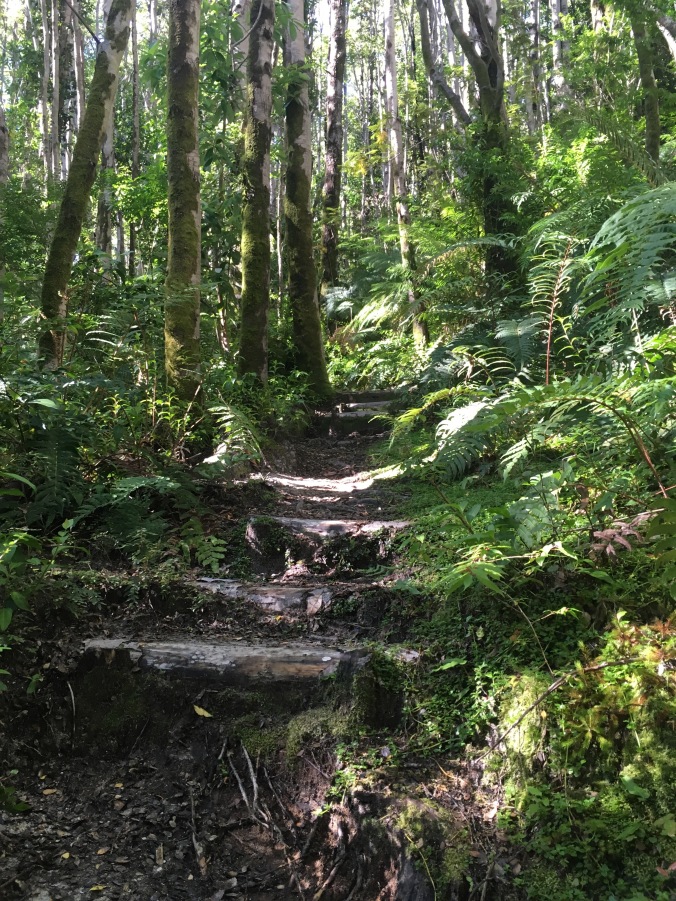 At the top we had a pretty good view of the valley and a less pretty glacier. 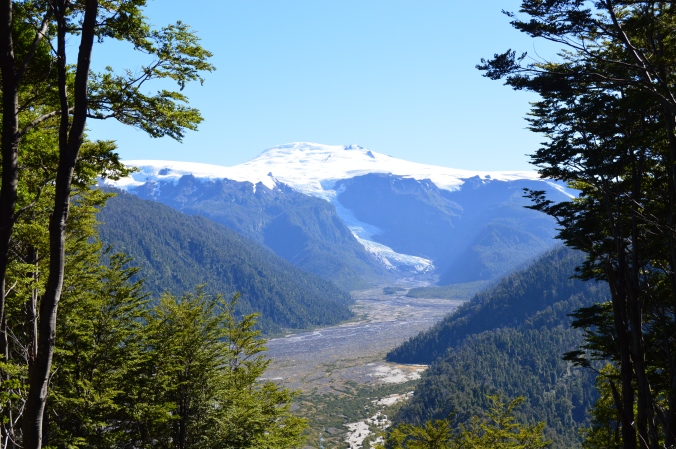 On balance, we judged the walk to have been worthwhile and were glad we had completed it in our chosen direction when we began the clamber down the far side. 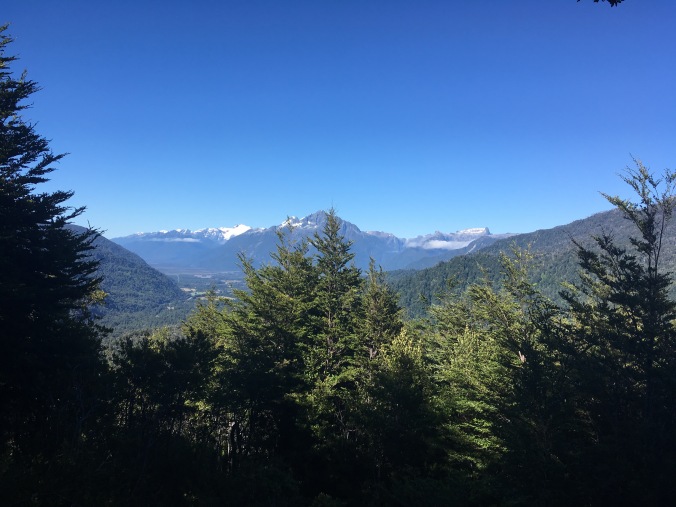 Once back on gravel track we had an easy walk back through beautiful forest to our campsite. 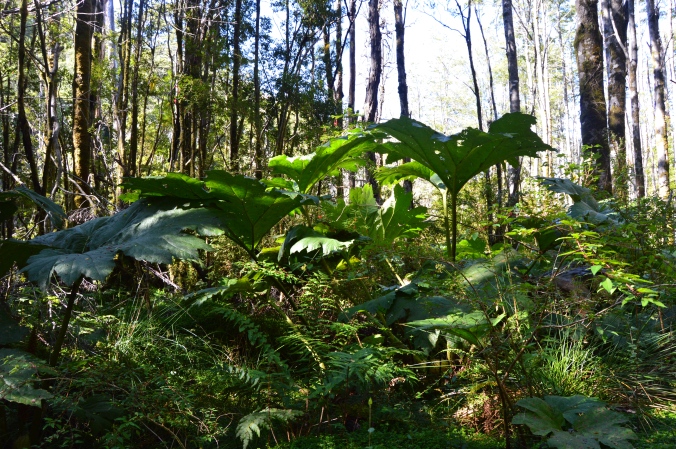 Back at camp we braved the freezing showers, which was unpleasant. To give time for all of our belongings to dry out, we stayed on for lunch before packing everything up and getting back on the Carretera Austral. 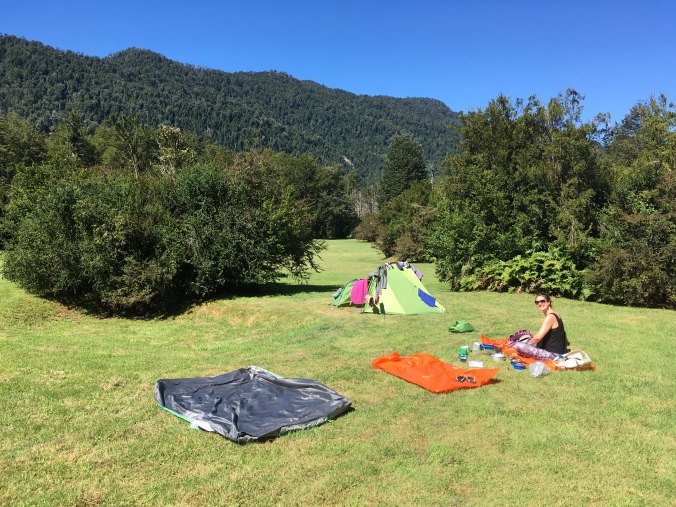 The road is pretty easy going to start with, which is a good thing because we were surrounded by truly epic scenery to gawp at. We have talked about gorgeous scenery pretty much non-stop on our grown-up gap year, but Patagonia really did keep hitting us with view after view. 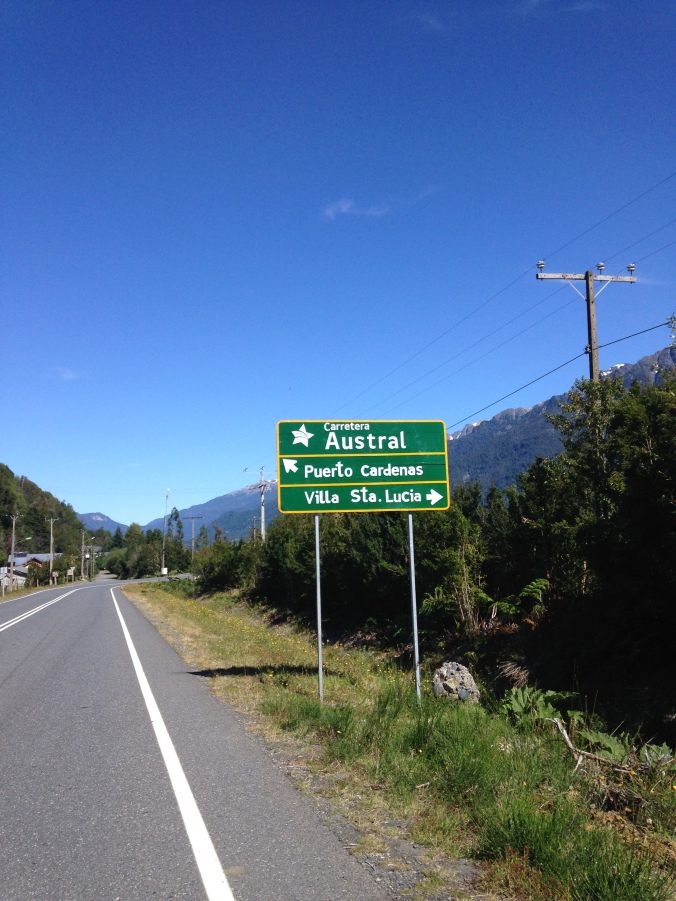 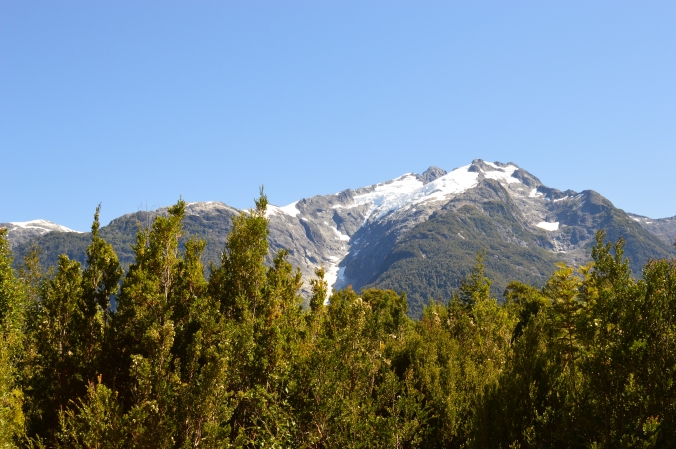 Probably the best view we had on the section that we drove of Ruta 7 was at Puente Yelcho bridge. There’s nowhere to stop on the bridge itself so James got out and walked along it in order to get some good photos. 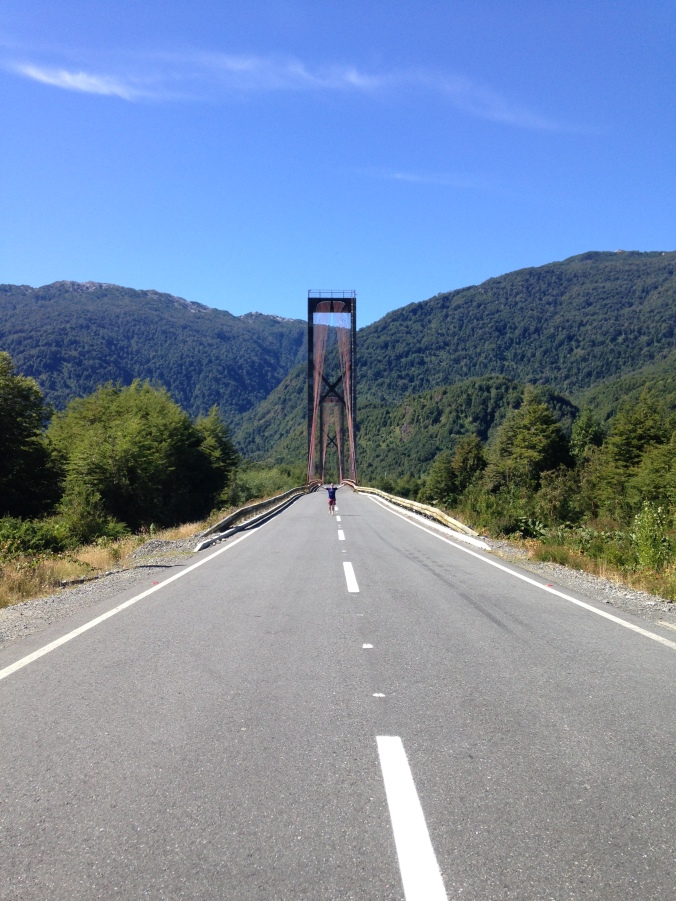 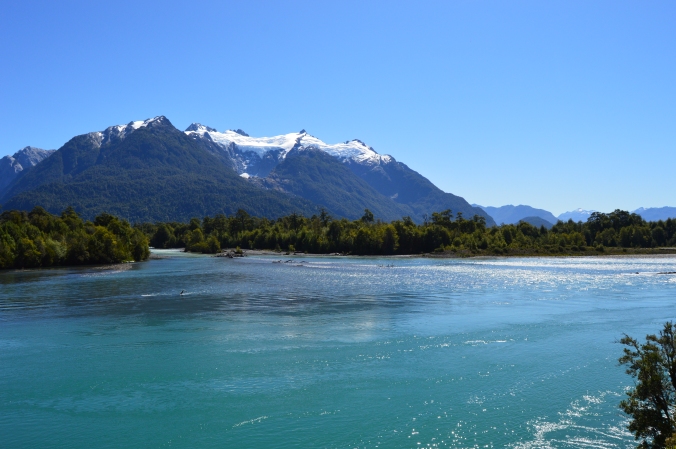 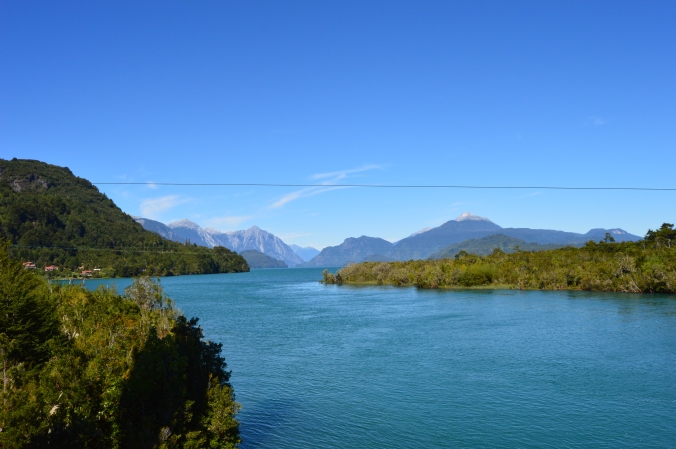 We were making excellent time until we sat in some roadworks for 30 minutes and the paved road disappeared soon afterwards. We stopped briefly in to town of Villa Santa Lucia. The town is still recovering from a truly devastating landslide that happened in December 2017 and we wanted to do our little bit by stopping to buy our drinks and snacks there. We turned east off the Carretera Austral towards Futaleufú (Fluffy Wuffy) and the Argentinian border. It’s not an easy drive on gravel and dirt and every time we encountered another vehicle the air filled with dust and poor Emilio looked like he’d been sprayed with the contents of a vacuum cleaner. We probably averaged about 40kmph and by the time we reached Fluffy Wuffy, Caro was desperate to stop driving. That being said, there were some more terrific views to enjoy on the way. 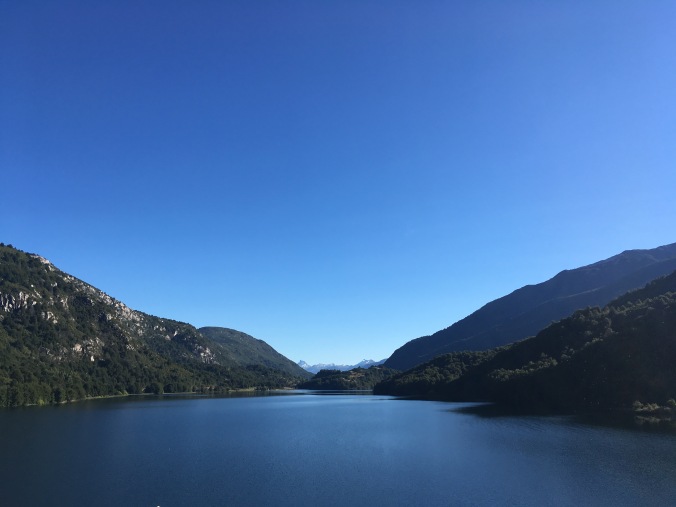 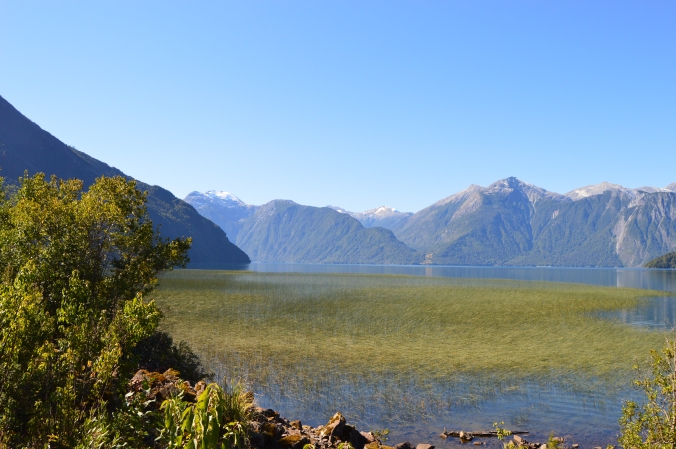 We had a nose around a campsite outside of town but it didn’t seem like value for money so we ended up camping in the back garden of what appeared to be a particularly run-down squatters’ establishment with about 30 other tents. It was fairly cheap and the wifi was excellent so we tried to make the best of it. Well James tried to make the best of it, Caro hid in the tent from the moment that it was pitched.

This is where we would have put a photograph of “the delightful shithole”, as James calls it, but we didn’t take any. Funny that.

Our fellow campers did not share our enthusiasm for early nights and we woke up intermittently throughout the night to sounds of ongoing festivities around the campfire. James was unfortunate enough to be awake at 4am and was serenaded by festivities of a far more intimate nature from a neighbouring tent, which he could have lived without. We escaped as early as possible the next morning after “washing” in the cess pit of a bathroom and throwing the soaking tent in to the back of the car. Fluffy Wuffy is adventure central but Caro hadn’t warmed up enough yet to brave white water rafting so we set out to do some hikes instead. 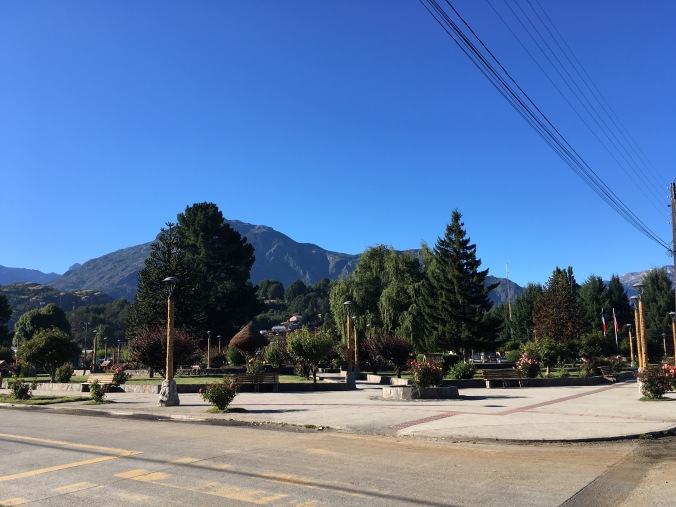 James is starting to seem like the Grand Old Duke of York, except that he’s not a duke, and he doesn’t have 10,000 men, he has one wife and she’s sick of marching up and down sodding hills. That’s being slightly unfair as we tend to decide on the itinerary together but it is usually James’s fault by the time we make it to the top. Sure enough, our hike for the morning was more or less entirely uphill to Piedra de Aguila. The path is through private property and mostly consists of a long steep track through farmland. 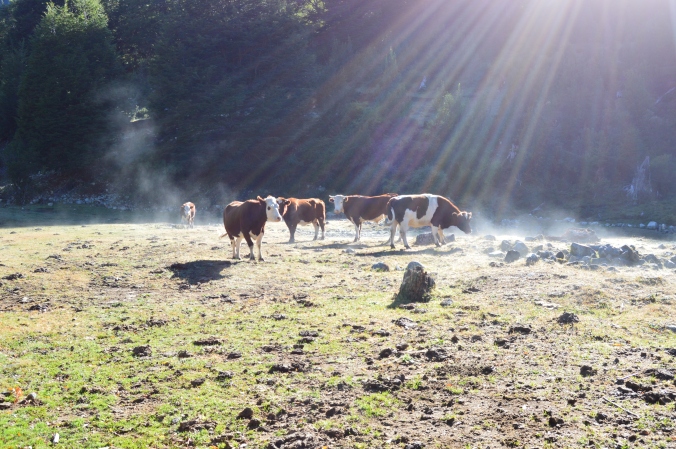 Right at the start we were passed by two men on horses who had the infinitely superior idea of riding to the top. We were quite content with our stomping though, the weather was perfect, there were birds everywhere, including 4 red-headed woodpeckers in a tree, and the views just got better and better, so we took our time on the ascent. 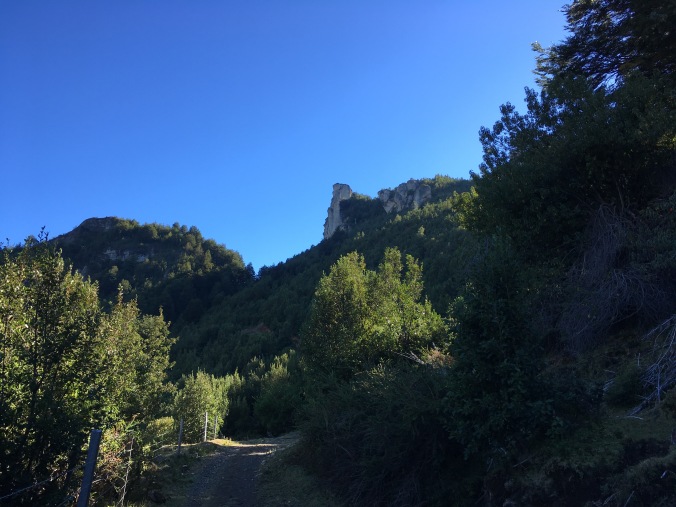 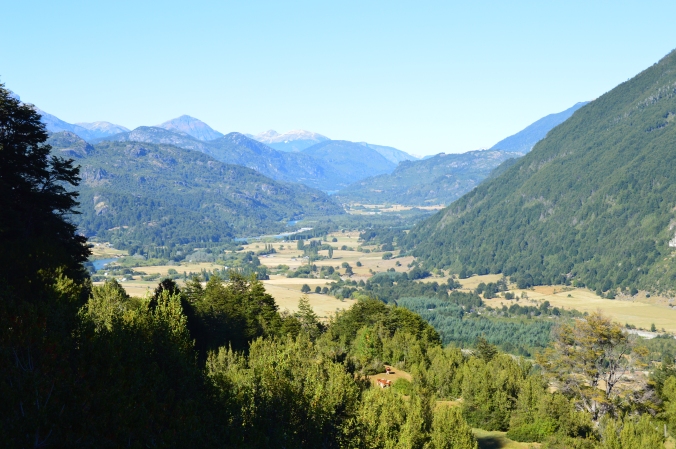 About halfway up, Caro had the disquieting thought that she may have forgotten to lock the car. James is particularly anal about checking that the door is locked, even when Caro has just checked herself, but had decided on this occasion not to. We eyed the track back down the hill and decided we would rather everything was stolen than try and tackle the hill a second time. Don’t worry, the car turned out to have been locked but James has been vindicated in a truly annoying habit that Caro will now have to put up with for the rest of her life.

There is a small plateau just before the final climb and a man wearing a beret collected 1000 pesos each from us, allowed Caro to cuddle his dogs for a bit and then pointed up the hill. At the top, James ignored the “dangerous area” sign and climbed to the top of the rock. In his defence, he couldn’t read it. 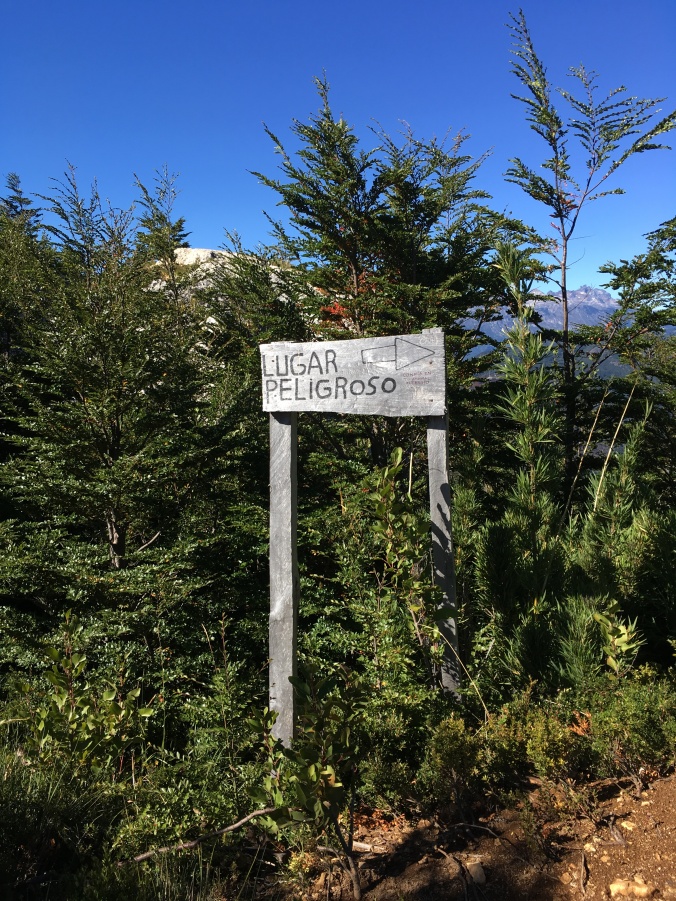 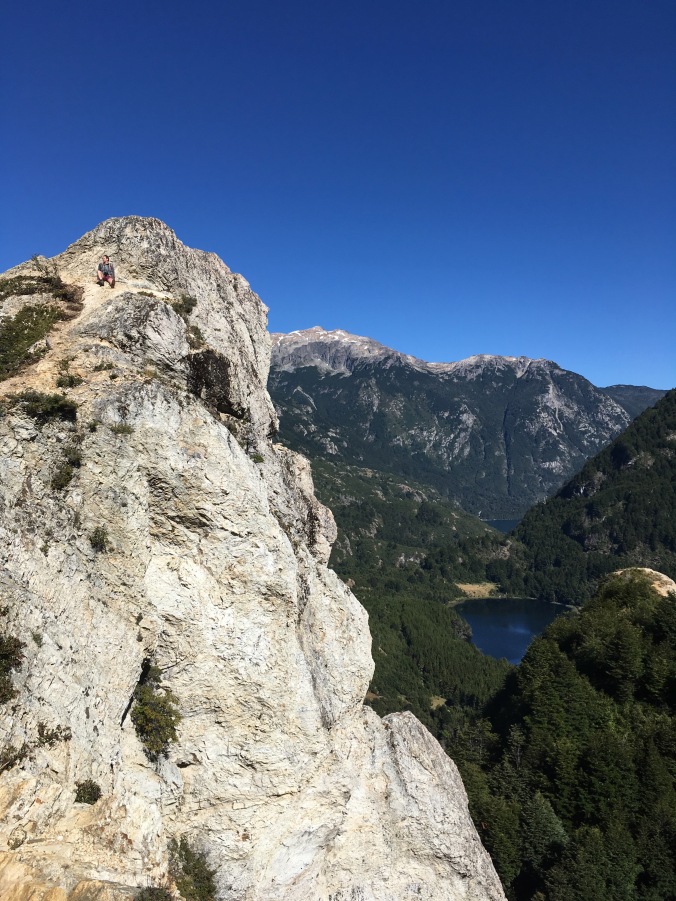 The views were beautiful, even from the far safer viewing area. 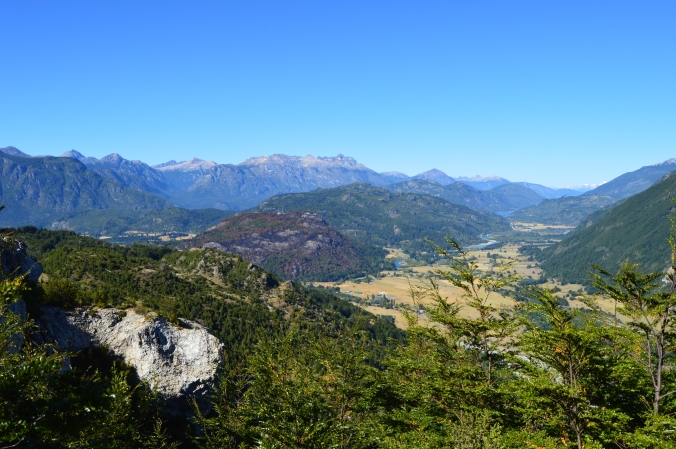 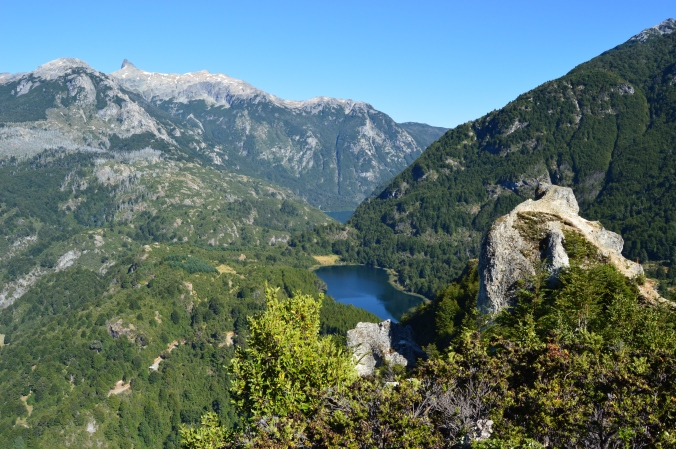 We returned the way we came and tried to find the makings of lunch in town. There are many things to recommend Futaleufú: the town itself is quite lovely, the surrounding mountains are gorgeous and the Visitor Information staff are very friendly and helpful. BUT. The supermarkets are egregiously misnamed and should be called underwhelming-markets or downright disgusting-markets. They have almost nothing by the way of fruit and veg and trying to cobble together any meal that is not almost entirely white carbohydrate based is a real challenge. The particular highlight were the buckets of loose frozen meat cuts that you just reach into and take what you want, like they were apples or something, we can’t actually tell this story without shuddering. 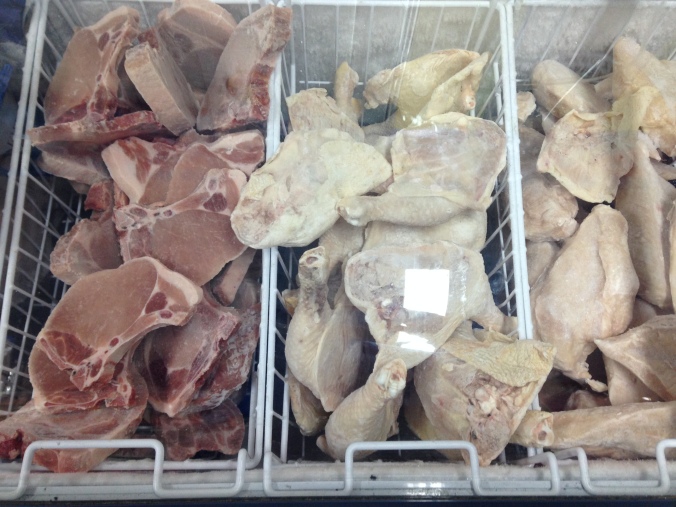 We ended up with a nutritious lunch of salami, bread, crackers and diet coke which we had decided to take with us to Futaleufú Reserve, on the eastern side of town. We were there on the 9th March and the registration sheet told us that there had been fewer than 20 visitors that month, and we were the only ones who weren’t Chilean or Argentinian. This amazed us; it is only a small reserve but it is absolutely beautiful and we couldn’t believe so few people go there. 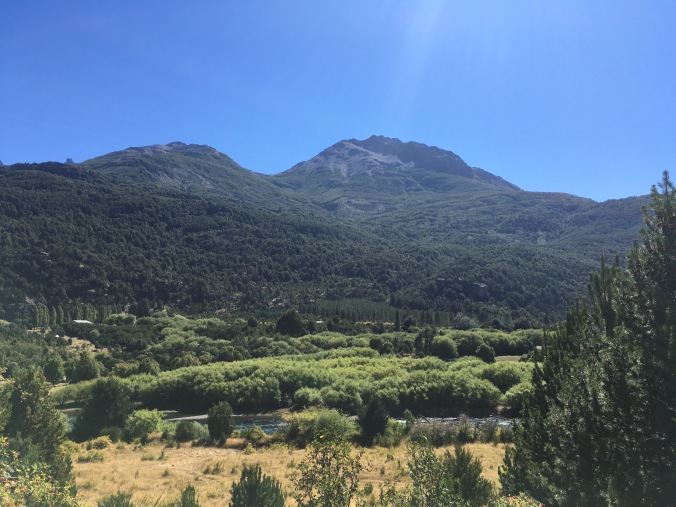 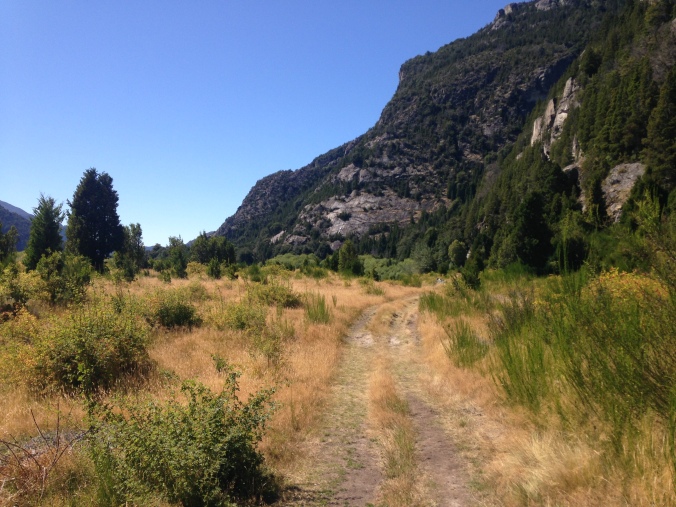 We made it to the beginning of the walks and had a picnic on the grass, after which Caro decided that she wasn’t going anywhere because the sun was shining and she was going to lie down and cook in it. James did take 2.5km round trip to the viewpoint which was definitely worth the short walk. 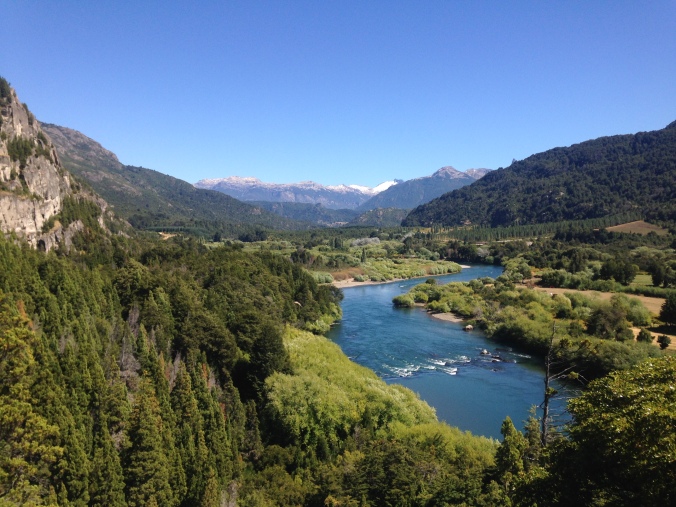 Back at Emilio, Caro put on shorts for the first time on our “summer” trip to South America, did a little celebratory dance and we made our way to the Argentinian border, 10km away, drawing our first foray into Chile to a close. Almost.

One thought on “Oh look some more hills, we must climb them! – Parque Pumalín & Futaleufú”