After our first disastrous night in the tent we learned from our mistakes and donned absolutely every piece of clothing that we owned and slept much more comfortably for the next two nights. On our fourth morning in El Chaltén we collapsed the tent, ready to move into a hostel for the last couple of nights. This would allow Caro to wash her hair and avoid our getting up at 5am on our last morning to break camp before an early bus. We also needed a bit of time with some reliable wifi, so James didn’t have to spend hours sat outside the camp toilets to achieve the smallest online task.

The decision to move indoors turned out to be a good call in many ways as you will see later. First though, the main hike of our visit and El Chaltén’s big ticket item:

The closest that you can get to Mount Fitz Roy is at Laguna de Los Tres, a 10km hike from town, 20km round trip if you plan to do it as a day hike, or you can camp at the 8km mark. It is not for the faint hearted unless you opt to skip the massive climb at the end, but more on that later. Firstly, the (very helpful) people in Tourist information and any blog that we have read will tell you that it is “mostly flat” for the first 8km. This is utter horseshit. The first 3km are more or less constantly uphill and the first 1km of that is pretty spicy. Now maybe we are massive wimps but common sense shall reign here, you start the walk pretty much at river level, this photo is taken at about the 2km marker.

RIGHT?! Not flat. Anyway, we had gorgeous weather for our hike and this view was definitely more impressive than the one that we had had in the valley on the walk to the waterfall so we’d definitely advocate clambering up. From about 3km the “mostly flat” rings true for a good while. At 4km you reach the very lovely Mirador de Fitz Roy where you get a stunning view on a clear day of the mountains that you are about to trek another 6km to see a bit closer up!

Turn around here if you were looking for a short hike, or do the loop around to Laguna Capri for a nice view of a pretty lake. For our money, the prettiest part of the walk is ahead from this viewpoint through to about 7.5km. We walked downhill to the river and meandered along the river valley. Make sure you pick a day with good weather, these views are to die for.

As we walked through the valley we pointed out various spots that we may stop for lunch on the way back. It was about 12:30 at this point, we didn’t want to do the climb on a full stomach and we thought that we could comfortably make the 4km round trip to eat lunch around 14:00/14:30. HAHAHAHAHA what fools we were! Anyway, we passed the campsite at 8km and felt quite glad that we hadn’t opted to camp in the park after all, it wasn’t the happiest of spots. About 500m beyond the campsite you reach the sign that says something along the lines of “turn around here if you aren’t a completely bloody nut job and a masochist to boot”. It also says that it takes an hour to walk 1km with 400 metres of ascent, which we thought must be generous to allow for all abilities. Here’s a tip: it DOES take an hour to make the ascent.

So, we set off up the hill. James soon disappeared up ahead, we generally end up walking separately when it comes to long bastard hills. The climb actually starts fairly innocuously but quickly turns in to a gravel / rock / running water nightmare from which you fear you will never escape and which Caro only survived thanks to walking poles. The views behind you are gorgeous but the rest of the experience is pretty grim.

James marched on whilst Caro took the whole thing a bit steadier, it took her a lot longer but she felt less like she was going to die on the way up. Caro also had the bonus of seeing a huemul deer, which are native to the area but are also endangered and therefore rare.

Twice on the way up you feel as though you are reaching the top, only for another bloody hill to be hidden over the ridge. The final ascent is up a gravel slope that is slippery as all hell and exposed so a delightful icy wind blasts across as you climb. 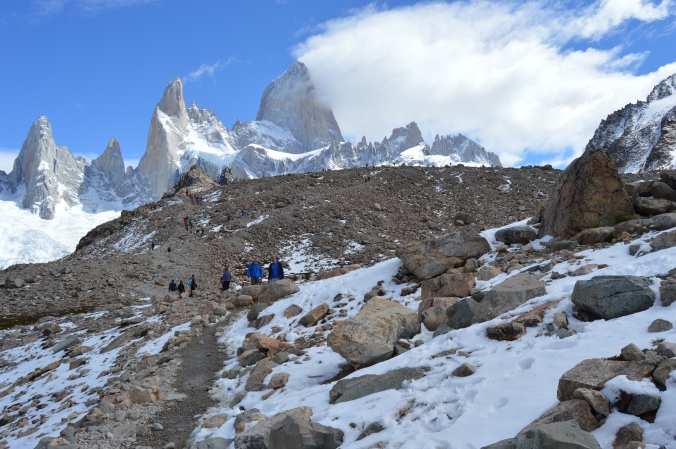 Yes, that’s right, we’re above the snowline now. Finally, we both made it to the lake.

James had been at the top for ten minutes by the time Caro got there, she took one look at the lake and mountains, jabbed her finger angrily at them and said “NOT WORTH IT!” Swiftly followed by “I’m starving!” We have differing opinions on this; James (eventually) liked the sense of achievement of having made it up the hill, Caro still doesn’t think the ascent was worth the outcome. Don’t get us wrong, we both agree that it’s pretty awesome, Caro just doesn’t think that the view is any better than the one from the valley. As she posed for the below picture Caro said with feigned enthusiasm: “pretend you’re happy to be here!” A girl recovering on a rock nearby laughed in solidarity. 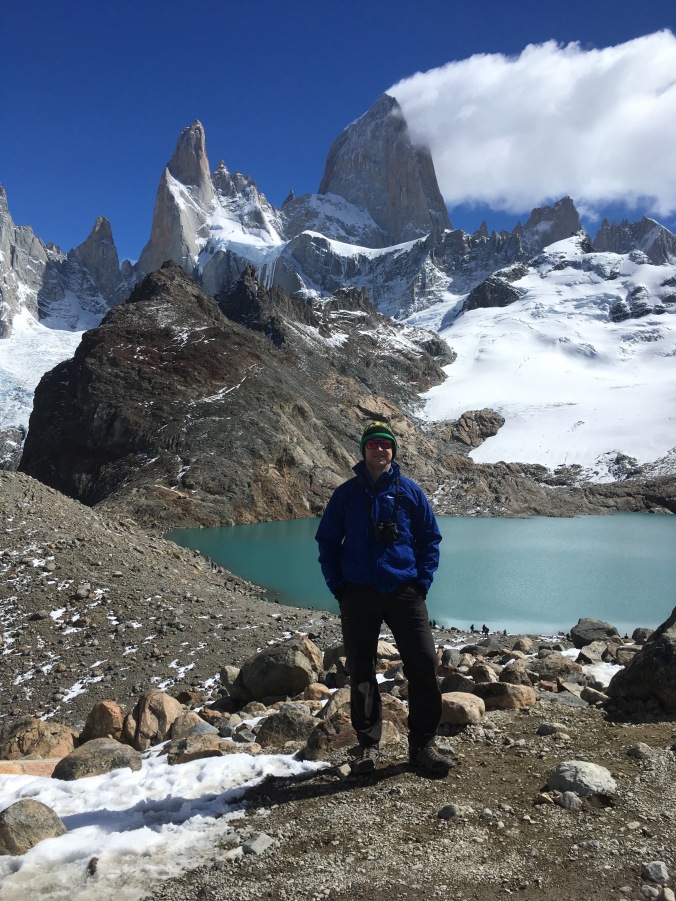 There was no way that Caro was tackling the descent without some food, so we had our sandwiches at the top of the hill. Fortunately, the big mountain right in front of you provides a good deal of shelter and so long as the sun is out it is actually a perfectly nice picnic spot. We didn’t stay for long after we finished our food, just long enough to brace ourselves for the delightful gravel slide that awaited us on the way back down. 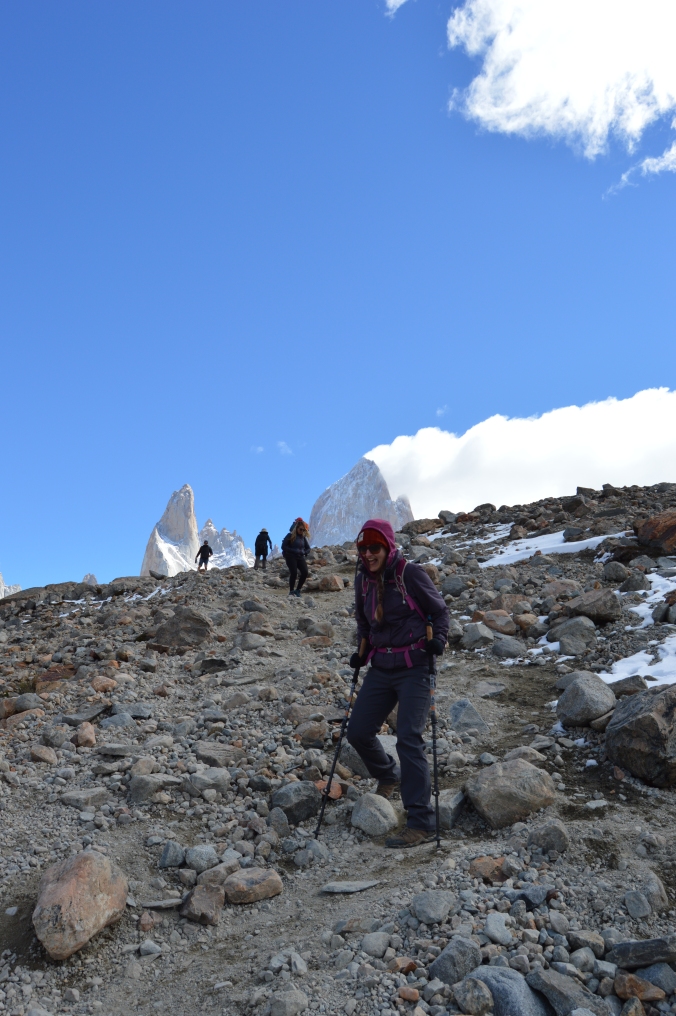 It took us about as long to get back down again, the descent is equally as tricky and you need to pick your steps carefully and get out of the way of people coming up. About 15 minutes in, a group on their way up heard us speaking English and asked us if we knew the England / Wales rugby score from the previous day. They were all pretty pissed when we told them of England’s loss and we felt that we had added insult to serious injury sending them on the last stretch to the summit with the bad news, it would have been kinder to lie.

We got to the bottom, found a spot in the sunshine by the river and collapsed for a bit. The prospect of another 8.5kms to get back to town was not particularly appealing but we filled up our water bottles with some fresh glacier water (more on that later) and shouldered our bags again. The walk back through the valley should have been lovely but, really, we were just counting the kilometres down and only stopped a couple of times to appreciate the scenery. We passed our potential “lovely lunch spots” at about 4pm. We did choose to alter our return trip slightly and take a path via Laguna Capri. This doesn’t add any distance to the trek but it does make a nice change of scenery and the lake is really beautiful, if a little windswept. 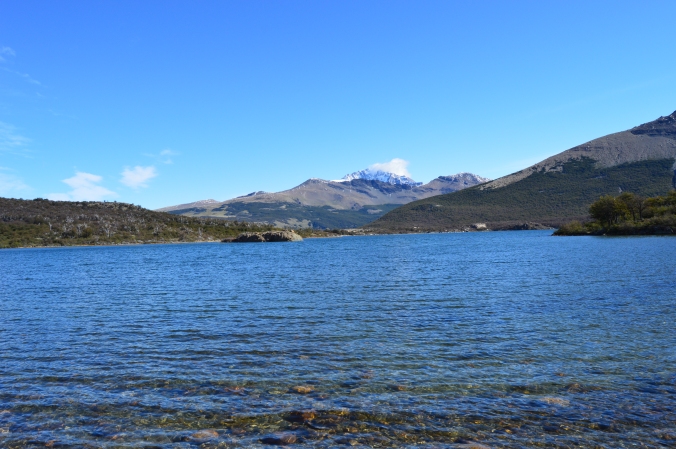 We made it back to town at about 6pm and limped into the hostel and much needed hot showers. So, was it worth it? James thinks so. Caro thinks it would be a far nicer hike to just go the 7.5km into the river valley, maybe sit there with a book and your lunch for a couple of hours, and actually enjoy the walk back out, rather than enduring it as we did. That being said, we do have bragging rights now. We both agreed that, at the very least, you should make an effort to get to the viewpoint and try for the valley, because it’s absolutely spectacular (and mostly flat, apparently).

We’d planned to do another day’s hiking in El Chaltén but unfortunately Caro was feeling really ropey the next morning. Which brings us back to river water. We had been told by everyone: people in tourist information, the national park office, the hostel, the campsite and countless blogs, that the water in the rivers is perfectly safe to drink untreated. It isn’t. Caro knows for a fact that it isn’t and we can also state wholeheartedly that you don’t want to find out quite how undrinkable it is. Suffice to say that at least we weren’t in a tent at this point. Treat the water, please. Fortunately, the weather wasn’t exactly fantastic on that last day and we had done every walk that we had planned to do before arrival so we tried not to let it bother us too much. We opted instead to stroll around town and take in some of the smaller sights, and play with the ever present dogs. 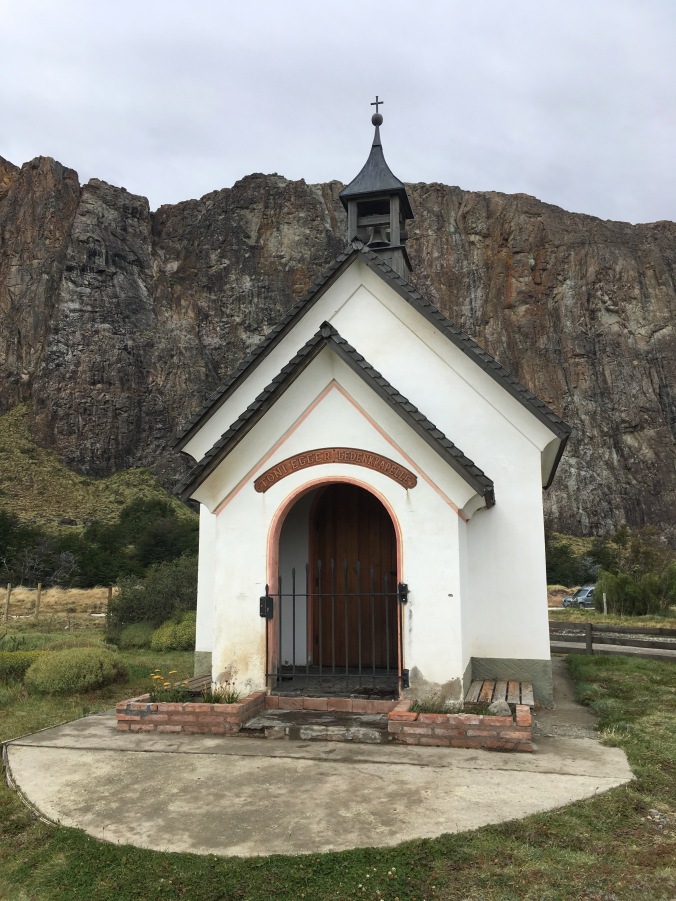 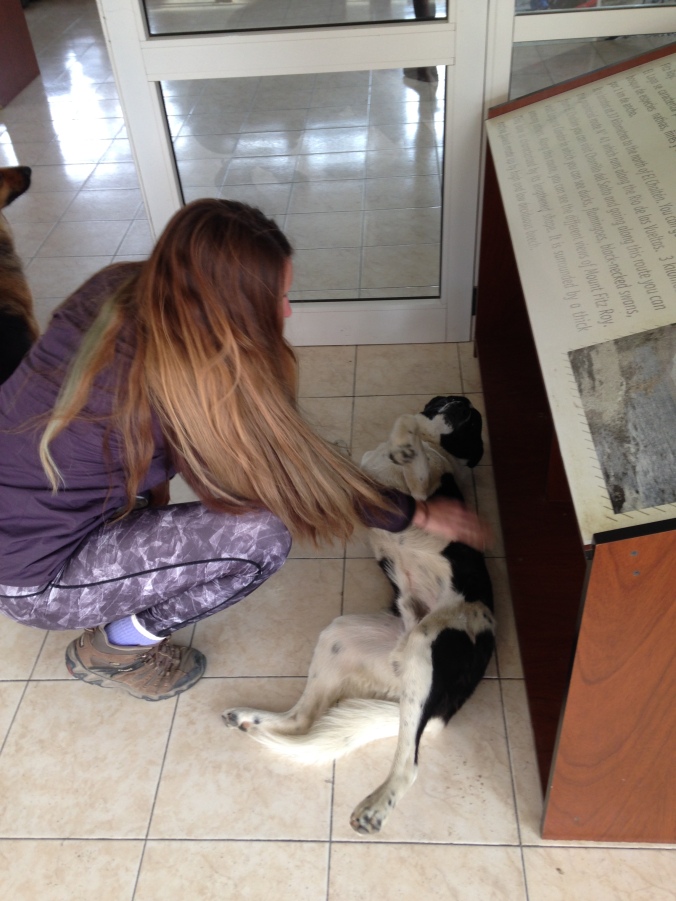 Despite still not feeling 100%, we absolutely refused to end our El Chaltén trip on a low. So we made our way to La Vineria, which we had initially picked because the exterior looked like the grungiest place in town but had our expectations completely subverted by this delightful wine bar with a sort of gentle apres ski atmosphere.

Wine was followed by a mountain of perfectly cooked steak and lemon honey potatoes at Patagonia Rebelde where we shared the restaurant with a table of superb looking local characters.

The perfect end to an excellent (and mostly flat) trip.