The 3-hour bus trip from El Calafate to El Chaltén is absolutely stunning with endless stretches of scrub land, lakes, mountains and the occasional animal; we saw a rhea and some llamas, there was much excited pointing at these.

The final section of the journey is particularly spectacular as the road makes a beeline for the mountains, it’s definitely one of the most beautiful landscapes we have seen on this trip. We were in a bus so we couldn’t get out and take pictures but, had we been self-driving, we would definitely have been the people taking an Instagram shot of one of us walking along the road (try google images of the road to El Chaltén, honestly, it’s a corker).

By the time we arrived in town it felt like a few days ago that we had left Perito Moreno, rather than a few hours. Our feet dragged as we walked the 1.2km to the hostel, we know it’s 1.2km because James tried to lie and say it was under a kilometre and Caro called him out on it. We checked in, showered and collapsed in to our beds.

The next morning, we woke to the beautiful views surrounding the town and sped off to the information centre to get a map before heading out to do a couple of short walks.

Nearly every walk out of El Chaltén requires a short sharp ascent at the beginning and this was our first taste of that. As we stomped up the hill we wandered what on earth we were in for on later walks if this one was graded as “easy”. We soon stopped climbing though and strolled along the flat path along the side of the hill. It was beautiful. 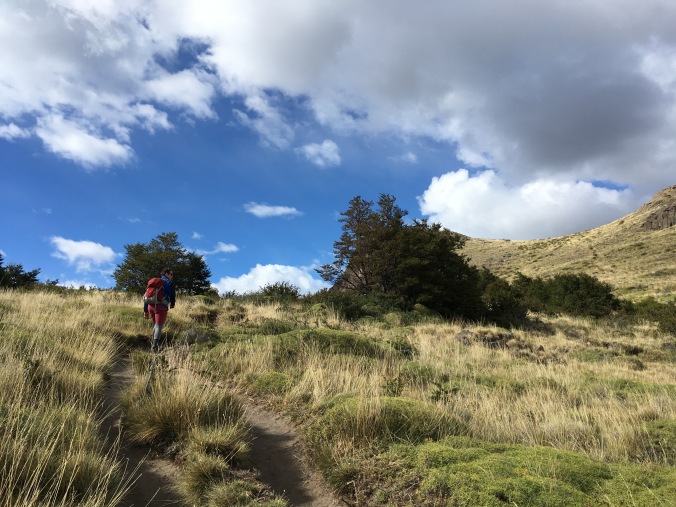 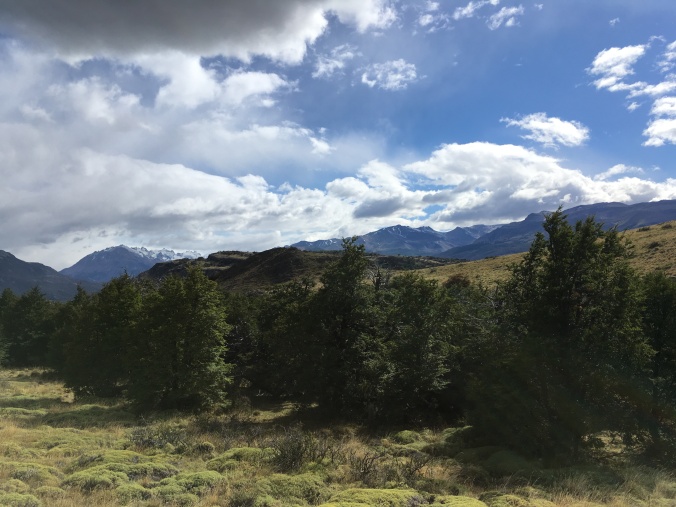 Within about half an hour we reached the viewpoint and were gobsmacked that such great views were accessible so close to town.

The road just visible snaking across the left hand side of this picture is the one along which we had arrived, El Chaltén really is miles from any other sign of civilisation.

We retraced our steps back to the top of the hill and turned right for another short sharp uphill to a perfect vantage point from which to see the town.

This spot is supposed to be amazing as the sun emerges over the mountains ahead and we made some very vague murmurings about perhaps getting up early one day to watch the sunrise. Spoiler alert: that doesn’t happen.

This walk follows the gravel track out of the far end of town and along the river valley with really pretty views of the mountains.

We dropped off the road in to a sort of wetland and wound through for about a kilometre before re-crossing the road for another kilometre or so through a wooded area until we reached the waterfall. On the way there we joined a small group gathered on the side of the path to watch a native red-headed woodpecker going to town on a tree.

The path to the waterfall is misleading, we didn’t expect anything very big and then we rounded the corner and were met with a torrent of water

It’s a pretty spot and the walk is a nice way to see the valley if you aren’t planning on heading up to Fitz Roy (more on that next time.)

As we have a lot of hiking planned for this part of the trip we decided to bring a tent with us, with the aim of also using it for a large chunk of our accommodation, to keep costs down a little bit. We hadn’t actually pitched the tent before. In our defence, we did try to pitch it in the living room, but it’s one of those tents that needs to be pegged out to retain its shape, so we would have had to go outside and it was cold and wet that day so we didn’t. Luckily, it all went swimmingly when we pitched it that afternoon and our home was set for the next few nights. 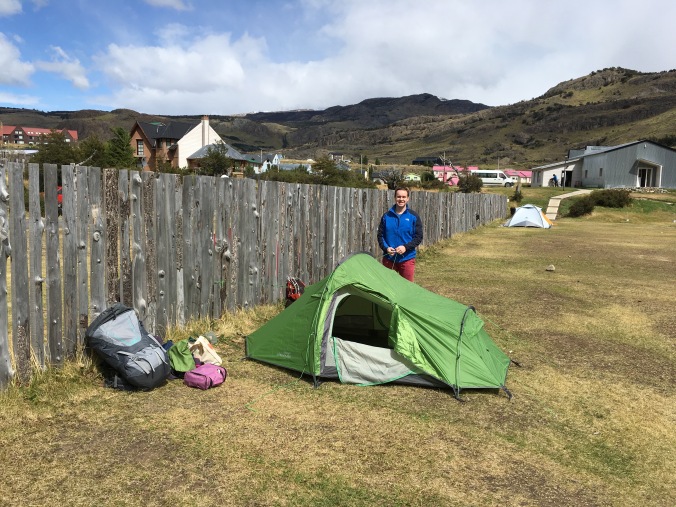 For dinner, we decided to keep it local and feasted on some pretty awesome empanadas from Che Empanada and cans of Schwepps Pomelo (our latest and most delicious addiction) before retiring to the tent for our first night of camping. It had been chilly during the day, but overnight the temperature dropped well below freezing. Our sleeping bags are not designed for such low temperatures and it was a very cold, uncomfortable and largely sleepless night for both of us. When we crawled out the following morning the outside of the tent was iced over and we seriously questioned our decision to camp at all. We had planned to pack everything up for a two-day hike in the park but the weather forecast was poor for that night and we had no desire to be even colder than we had been, so we decided to leave the tent pitched where it was and tackle the walk as two separate day hikes instead.

The hike started uphill (obviously) and for the first hour we mainly trudged and breathed heavily through what was doubtless some lovely scenery. Once we had the bulk of the climb over we were able to actually look around and enjoy the views, which were beautiful with the river below and Cerro Torre up ahead. 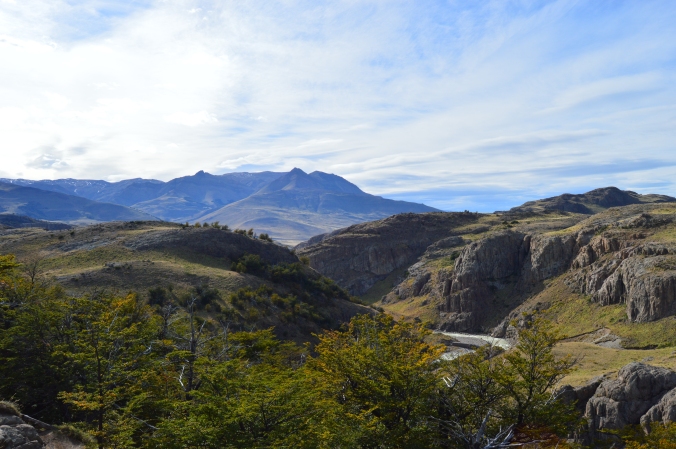 At Mirador Cerro Torre we got our first view of the glacier.

We practically ran down the hill from the viewpoint because an unnamed girl and her friend Britney were having a very loud and heated discussion in the middle of the trail about whether or not they continue on the hike and it was super uncomfortable for everyone else. We saw unnamed girl later, Britney was nowhere to be seen. At the bottom of the hill it was an easy stroll down through the woods and along the riverbed, largely sheltered from the wind. 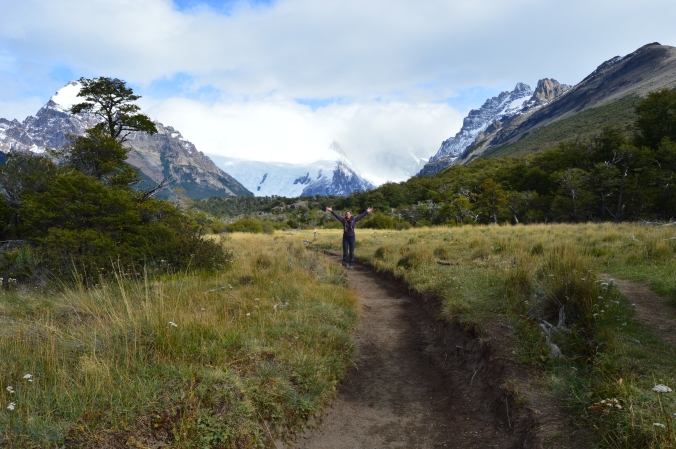 Regular readers will know that we haven’t been enormous glacier fans in the past but that Perito Moreno went a long way to changing that. Well, the mountain Cerro Torre is the main attraction on this walk but the glacier was so spectacular in the sunshine that it simply mesmerised us. We didn’t use flash or edit the colours on this photo in anyway, the glacier really glowed, it was ethereal.

The final couple of kilometres to the lake skirted along the riverbed and for the last kilometre the wind picked up dramatically until we had donned all of our layers and zipped everything up so that only our eyes were showing. The grand finale of the walk is Laguna Torre, a glacier lake at the bottom of the mountain.

It wasn’t the nicest view of the day, we found the rubble and grey water quite unappealing, but there was a sense of achievement. Scattered around the lake people were trying to find the biggest rock to crouch behind for a spot of lunch. The wind was absolutely brutal and, although we did find a good rock, we had to give up after a few bites and retreat back down the trail for a bit more shelter. From here we retraced our steps back to the start of the trail to round off our 18km hike.

Back at the campsite we cobbled together the best dinner that we could in our tiny camping pots. We discovered the limits of Caro’s Spanish when reading this precaution on our cooking spray.

Caro knows two meanings of the word “llama”: either “to be called”, as in “me llama Caro”, or a fluffy looking donkey thing with a long neck. Clearly this didn’t refer to the first meaning so, to her, this read: “Do not spray directly onto a llama”,  which seemed odd. It turns out “llama” has another meaning, “flame”, which is infinitely more sensible but much less fun. She also mistranslated another of the warnings as “do not spray under your arms” which, though incorrect, is still pretty good advice. It’s amazing that we have survived until now.