A few years ago, we finally had to suck it up and spend Christmas together. This meant that one of us would miss Christmas with their family and, because this prospect was hugely unpalatable, the tradition of Fake Christmas was born. Fake Christmas or Faux Noel can occur anytime in the six or so weeks preceding Christmas and is the whole shebang: bucks fizz, presents, Christmas dinner, stockings, games and at least a one bottle of Bailey’s (a day). It’s a tradition that we have observed for the past 5 years in one or the other household. There was a hiatus in 2017 when we were abroad for the whole year but the tradition was resurrected in Christmas 2018 with the Stones. Our Norfolk Christmas was kicked off in wonderful country style with diddly-diddly music in the local pub, the Rumburgh Buck.

On fake Christmas day we were spoiled with many lovely presents but the crowning glories were definitely matching jammies for Caro and Daisy. Presents were followed by an amazing rib of beef.

One Christmas down, one to go. We found ourselves back in Heathrow Terminal 5 and were soon deposited at Nice Airport. Now, ostensibly we were there for Christmas, but our main purpose was to meet the latest addition to the Aldridge household: Oscar.

Caro’s family have long been Rugby Club Toulonnais supporters, admittedly Caro’s interest was only really sparked when Johnny joined, but the enthusiasm has remained since his retirement and December 23rd saw us piling into the car and driving to Toulon to watch the match against Lyon.

Now, Toulon had had a woeful season up until that point and continued to have a woeful season from the following game onwards but some kind of magic happened on the day that we were there and Toulon absolutely flattened Lyon (40-7) in a spectacular display. There was much jumping and waving of arms and shouts of “Allez Toulon!”. The atmosphere at Stade Mayol is always electric and the quality of the match can often pale in comparison to the quality of the supporters. You simply have to get to a match if you can, purely to hear a live rendition of the Pilou Pilou, Toulon’s very own hakka.

Our next task was to tackle the Christmas tree which required a team of six to install; two project managers to provide oversight and constructive criticism, three grunts to do the heavy lifting and one Weimaraner to get in the way. 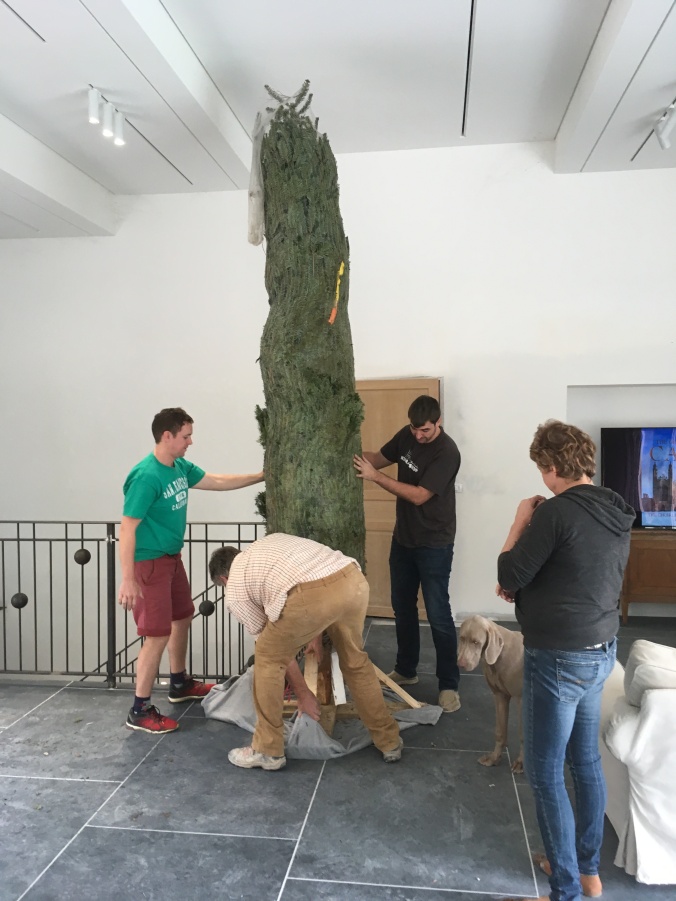 Fortunately, we had a scaffolding handy to aid with decoration.

It may have taken two separate shopping trips, eight sets of lights and three full days to decorate, but it was 100% worth it. 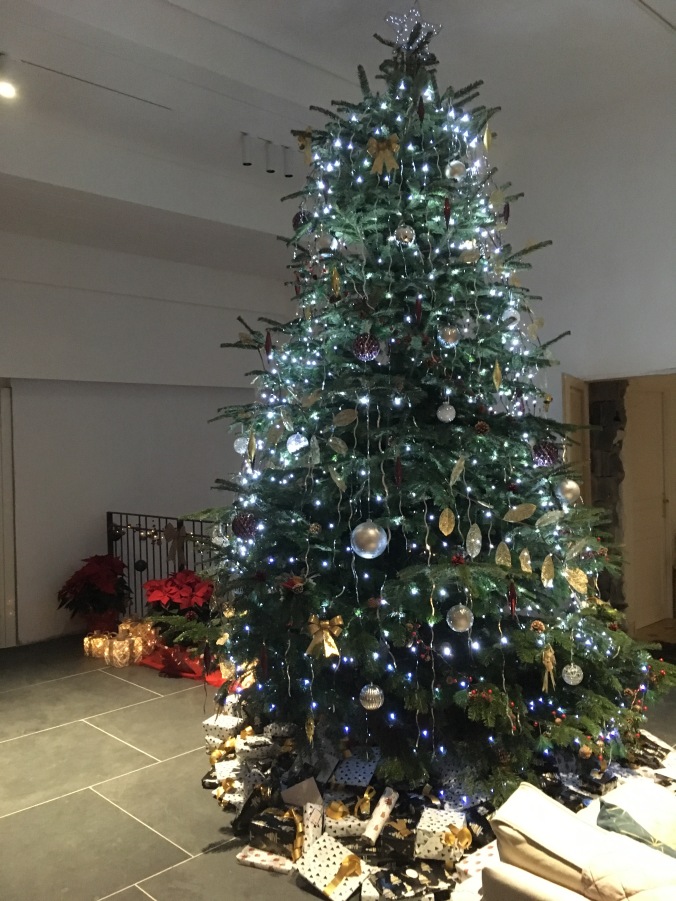 Every year we read the Night Before Christmas as a family on Christmas Eve, on occasion joining conference calls from different continents. For the 30th anniversary of this tradition, and for the first time in many years, we were all together.

On Christmas Day, we were joined by Gary and Sarah who have subjected themselves to Aldridge Christmases both true and faux for many years now. 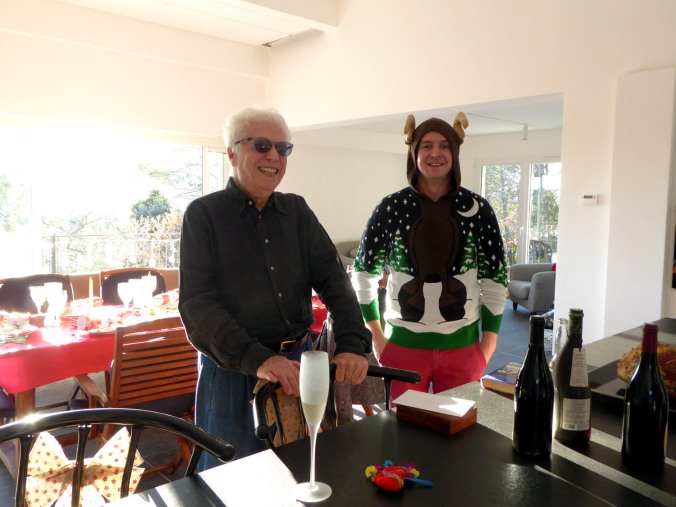 We realised that, beyond our wedding photographs, there isn’t a single picture of the whole family together, so here’s a preview of next year’s Christmas card.

Christmas flew past and none of us can really remember boxing day and before we knew it we were back on a plane, vowing never to drink again and anticipating, with absolutely no enthusiasm, the lengthy journey back to Norfolk. And we’d had to leave Oscar.

Several days of recovery followed after which Caro was feeling up to a riding lesson with Jane and the next step in the development of this vastly expensive hobby.

Uncle Dragon, on the other hand, was occupied as Daisy’s transport for the day. 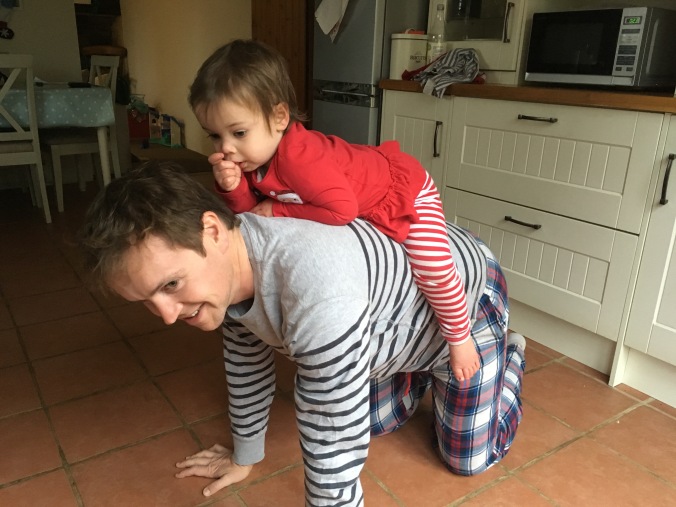 With the holiday season over we still had a few weeks in the UK and we were determined to put them to good use, see our friends and have something to write about our home country. The first such opportunity came once again from James’s parents’ local village of Rumburgh, which is a lovely crossroads in the middle of the countryside full to the brim with eccentricity. Exhibit A: The Molly Men.

We hesitated to put this in the blog, because of the traditional blackened faces, but as the meaning is in no way racist, and the whole thing is delightfully mad, we felt that it should be included. We will give a brief overview of the Molly Men, if you are interested in reading a more detailed account we found this website particularly illuminating. The Molly Men were  out of work ploughboys who performed during winter for money, when the fields were too wet or frozen to work. Plough Monday was when gangs of these out of work plough workers would drag the plough through town, demanding money from its residents when they couldn’t earn money themselves. Those who refused to make these “donations” would suffer the consequences. The blackened faces were a form of disguise, so that they couldn’t be recognised by police. What this tradition translates to is that at 8pm on the first Monday of the New Year, ordinarily sane(ish) members of the local community dress up in olde worlde costumes with a splash of cross-dressing thrown in, light torches, carry a plough up the street and dance around in front of the local pub to the accompaniment of a group of accordionists who are inexplicably wearing vast quantities of freshly cut foliage. It was superb. It was also bloody freezing.

Our next stop was Bunny where our excellent hosts have literally read the book on hosting and on our first morning breakfast was laid out for us. 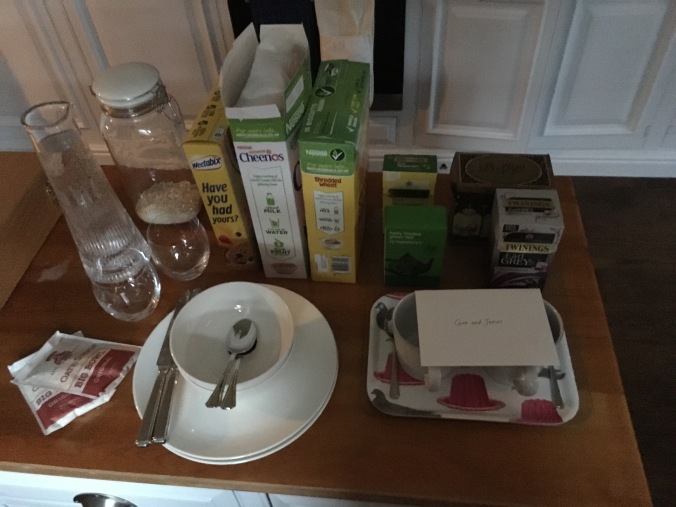 The day was spent exploring Bradgate Park, one time residence of the Grey family and which was absolutely stunning on a wintry day.

From here we made a surprisingly zippy journey all the way to Southampton to visit friends and take a walk in the New Forest where James did his damnedest to scare the life out of a five-year-old. The New Forest is home to wild ponies and they can be pretty feisty so it’s important to make sure that your presence is welcome before trying to stroke them. We had explained to Josh that there was nothing to be scared of and if you see the pony put its ears back then just back away and everything will be fine. 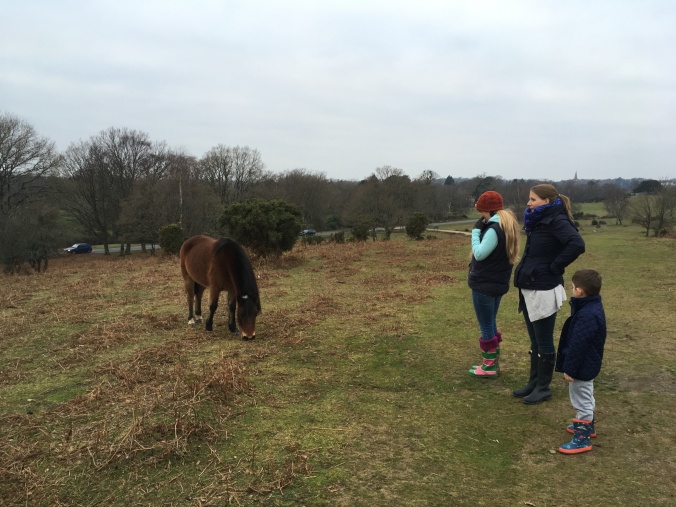 This was all going swimmingly until James decided to get cocky and completely ignore the entirely flattened ears of a nearby pony, resulting in a swift kick that very nearly made contact with his face. So now Josh is scared of horses and it’s our fault.

From Southampton, it was back to Norfolk for James to catch several Norwich FC games with his dad and help out with the building work that his parents were having done at the house.

Caro went instead to London and went full blown tourist, enjoying the beauty and relative calm of Covent Garden on a clear, wintry, weekday. 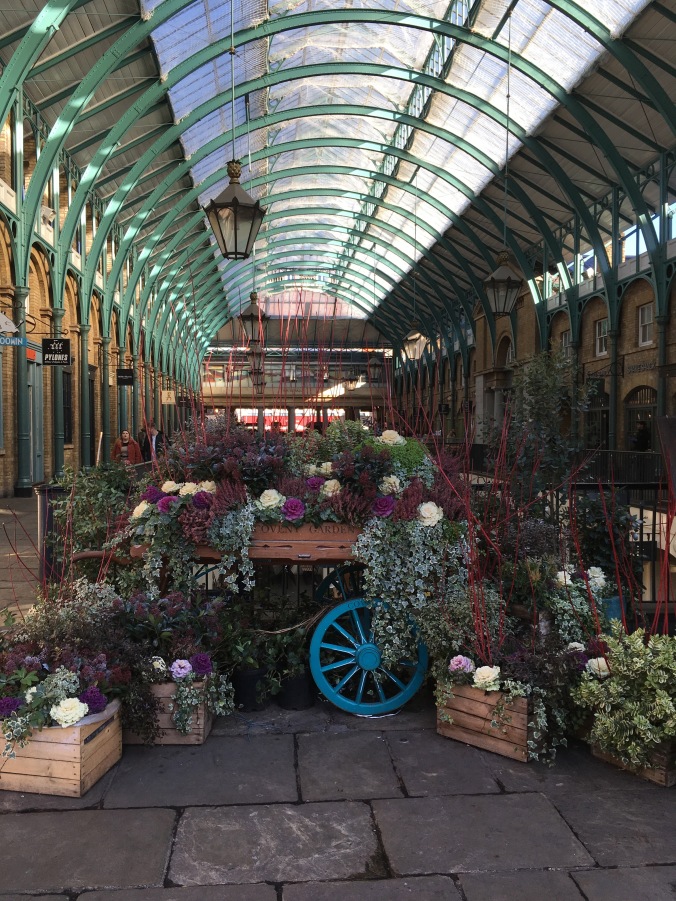 Having taken up temporary residence in Brockley it only seemed right to do a spot of sight-seeing and enjoy the street art, Brockley’s decided middle class market, and Hilly Fields on a crisp morning 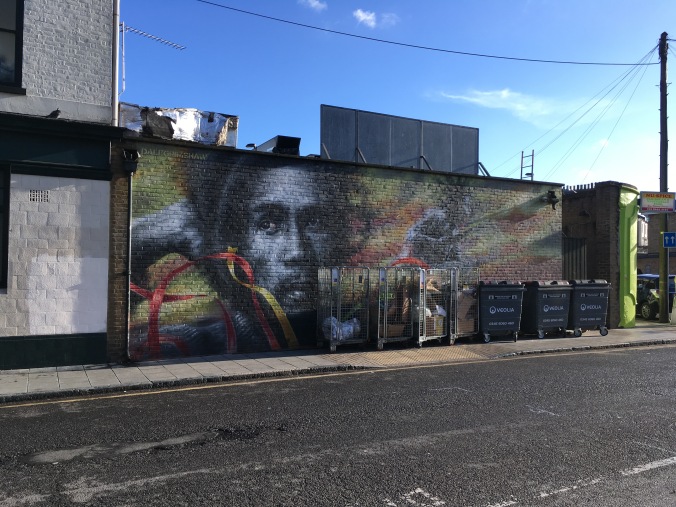 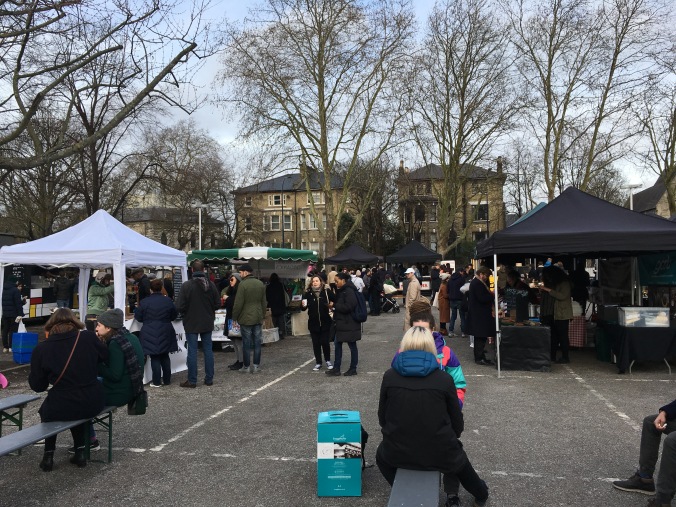 We were reunited for something which Caro has been dying to do for the 10 years that we have been together and which we finally got around to: lambing. James’s godfather is a sheep farmer and we spent a very enjoyable and labour-intensive weekend with him in Hertfordshire, constructing a temporary shed. 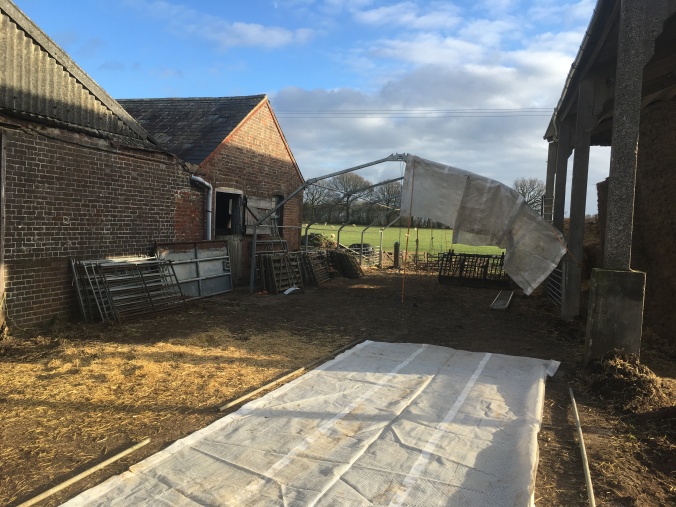 We returned a couple of weeks later to “help” with the lambing. We did try to help as much as possible and James stayed a few extra days to lend a hand but really Caro just wanted to bottle feed a lamb.

Last but most certianly not least, one of the real highlights of our trip back to the UK was being home for one of Caro’s best friend’s baby shower and the birth of her beautiful baby girl.

Truth be told, we were very comfortable and happy back at home, despite the fact that it was freezing and Caro loathes the cold. It was nice to be back with our friends and family and to feel utterly confident and comfortable in our environment and we were more than a little bit anxious about throwing ourselves back into the unknown. Caro’s GCSE Spanish did little to make us feel like we were going to be able to navigate South America successfully. We wouldn’t necessarily say that we procrastinated but we certainly prioritised the activities that we could do from the UK and made purchases that weren’t solely for South America; we were quite happy to buy camping and hiking gear (and test them out on the living room floor) because we always intended to use those things in the UK but the flights we put off for as long as possible with one or the other of us always unable to quell the uneasy feeling that it was going to be a disaster.

Fortunately, James got the nerve up to press the button and book our flights, saying to Caro as he did so “if it doesn’t work out, we’ll book in to a five-star hotel and get on the next plane straight back”.

We aren’t sure what made this particular part of the trip so nerve-wracking, you’d have thought that the more travelling we do the easier it would get, but that’s simply not the case. What is certainly true is that we know that travelling can be done badly and we are very aware that we have only a short period of time left and we don’t want to waste it. In any case, the adventure continues. These last paragraphs were written in Buenos Aires airport, almost at the end of our mammoth journey to El Calafate, our first Argentinian stop. You’ll be pleased to know that it hasn’t been a disaster, which is very promising indeed.

One thought on “Getting a bit too settled at home”