We spent five full days in Siem Reap. This gave us three days to visit the temples and a break every other day to avoid getting templed out too quickly. For this reason, we booked a hotel with a pool which provided the ideal setting for some lazing around. We would highly recommend taking this approach, Angkor is big and draining. We found the town of Siem Reap itself to be just ok, nothing special and there isn’t anything that we would particularly call out except for The Christa Restaurant & Bar which was the best place for value for money and overall quality.

Before we dive headlong in to the temples, there is just one other thing that we want to talk about in Siem Reap and that is the Phare Cambodian Circus, on the outskirts of town. Its home is actually in Battambang but a majority of the shows are in Siem Reap. The circus is primarily a charity which improves children’s lives through the arts and education; the performances are a product of this work. There is also an array of other arts related education, beyond the performing arts, which they also provide. We went for the cheapest tickets and had a really good view of the show in what is only a tiny big top.

By chance, we had booked tickets for the opening night of a new show called White Gold, which will be going on an international tour in 2019. The performance was excellent entertainment. It was a little rough around the edges with a few mistakes in some of the acrobatic sections, which will be ironed out with practise. We both liked that when they made a mistake, the performers just reset and re-did the stunt until they got it right. The theme of White Gold is the importance of rice and how it represents “the richness of Cambodia but also how Cambodia is exploited by the outside world”. The upshot is that the stage is constantly covered in rice. There are probably few materials in the world more problematic for a display of acrobatics than rice and we were digging our nails in to our hands each time the performers slithered around on landing a flip.

The whole show lasted just over an hour and we left having thoroughly enjoyed ourselves.  A quick tip though, be prepared for a sweaty show as the big top soon warms up when filled with people.

We aren’t going to go in to a huge amount of detail on every single temple that we saw, 23 in total, but we will include some photos and our impressions of ones that we found particularly interesting. If we were to give any history it would simply be rehashed from somewhere else (Wikipedia) so you can do your own research on that. We had been concerned that three days of temples is quite a lot but there were so many different styles that it didn’t get boring, just tiring.

On day one we tackled the Grand Circle. This was the easiest of the three days and so a nice way to ease in, although we were then taken by surprise when the following days became a bit gruelling. We set off at 7:30am in order to avoid some of the heat but this didn’t really work as it was already boiling. It took us all of ten minutes to pick up our 3 days passes and within half an hour we were deposited at our first temple.

We loved the elephants decorating each corner and the fact that there were so few people there. 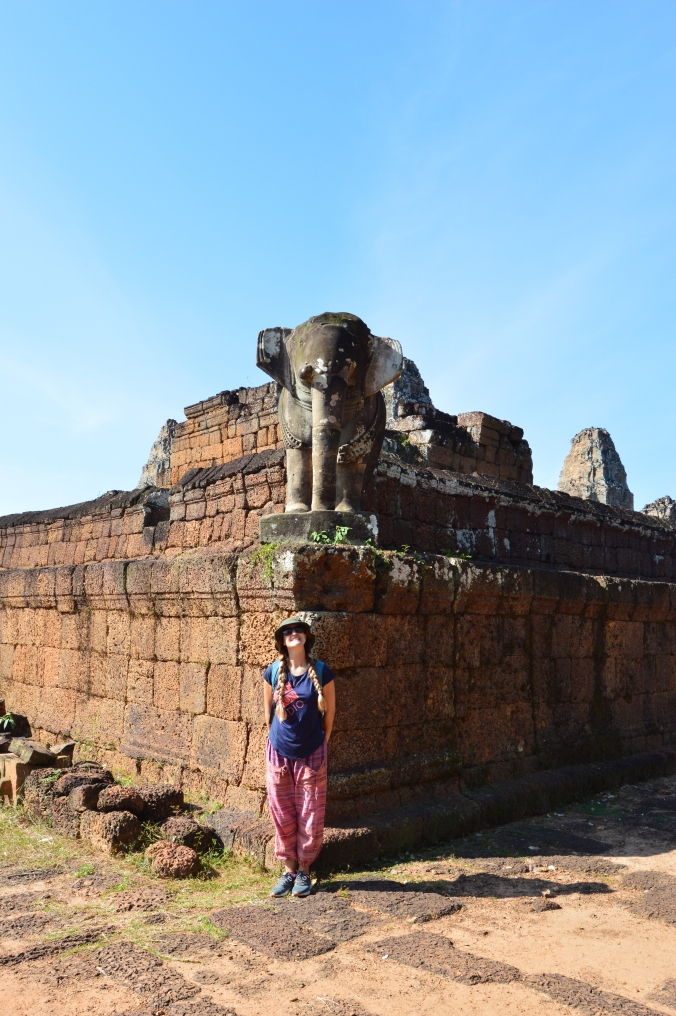 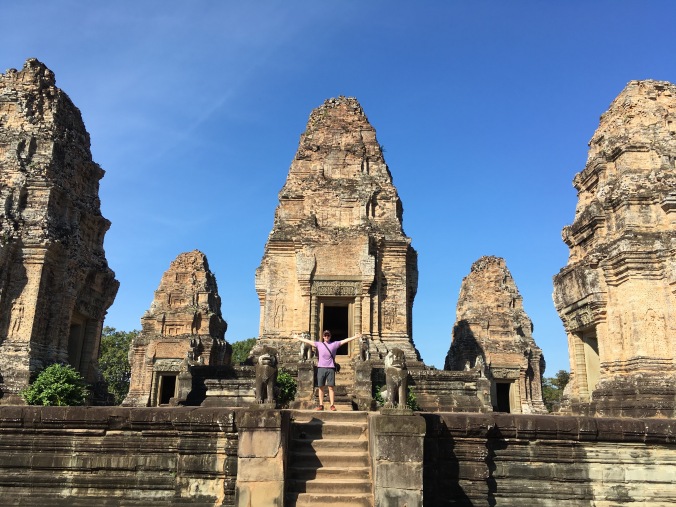 The temple is surrounded by jungle and there are trees growing around and through the buildings. This was by far our favourite kind of temple throughout the Angkor complex and Preah Khan is nearly as beautiful as its far more popular sister of Tomb Raider fame, Ta Prohm. Restoration work at the site is a careful balance of preserving the buildings as much as possible without ruining the beautiful effect of the jungle taking over. 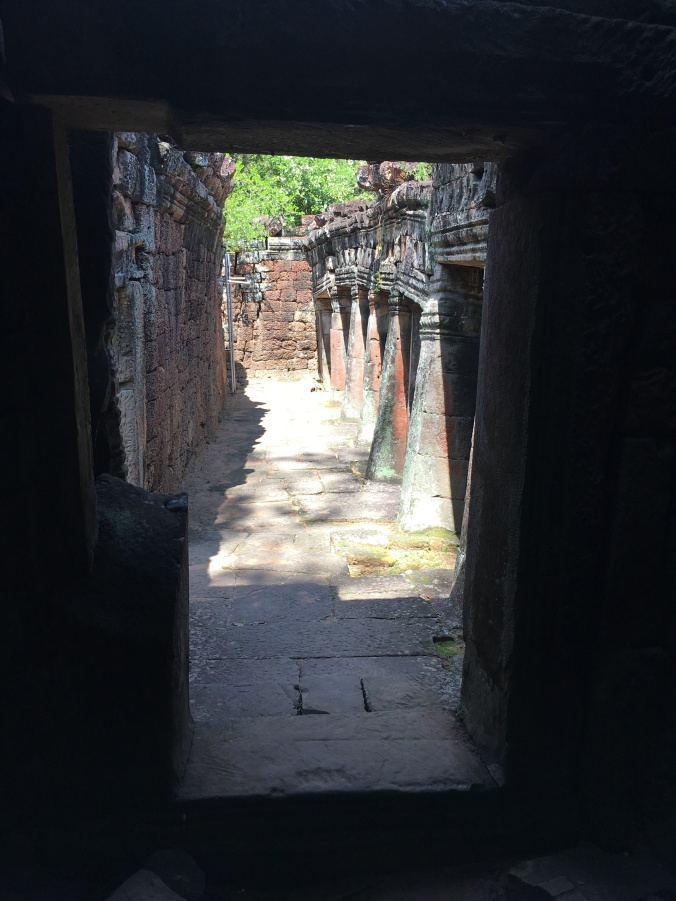 The exterior of the temple does little to excite the imagination, it doesn’t even look that old from the outside.  However, hidden within the towers there are exquisite bas-reliefs which we thought were the most beautiful carvings that we saw throughout Angkor. 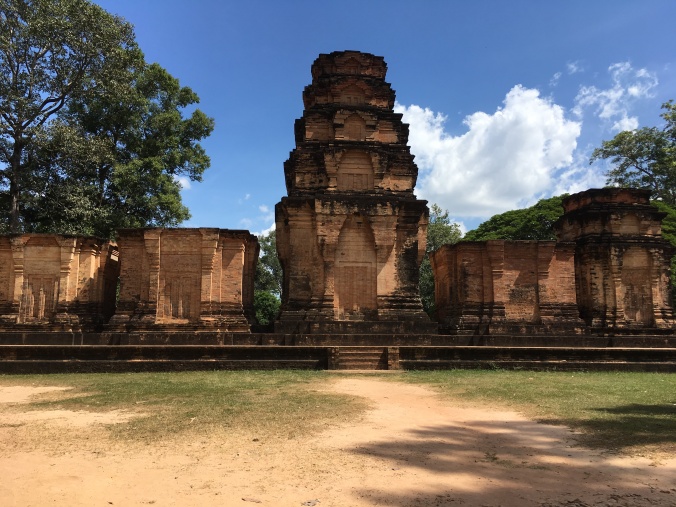 Day two of temples dawned cloudy and close but that did nothing to dampen our spirits; it was time to see Angkor Wat. We had decided to skip sunrise, it just didn’t feel essential to us. We went at the far more civilised time of 08:30. It was busy, but Angkor Wat is always busy.

Angkor Wat comes top of every list of things to do in Cambodia, everyone raves about it, it’s on the money, it’s a really big deal. We were so excited. Honestly… it was a bit of a let-down. Stop shouting at your screen, let us explain. There were so many things that we loved at Angkor Wat and we are in total agreement that it’s really impressive. What we didn’t get was the promised stop in your tracks, jaw dropping moment. We arrived at the West gate and were met by a low-slung building hunkering over an impressive moat. The original bridge is closed for repair so we crossed by way of a temporary bridge low in the water but that doesn’t really detract from the approach, it’s pretty cool.

We walked through the outer wall, ready for the big reveal.

You can actual see the top of Angkor Wat as you look through and we thought, yep, this is going to be awesome. Then we walked through, and it just wasn’t. This is what you see at first: 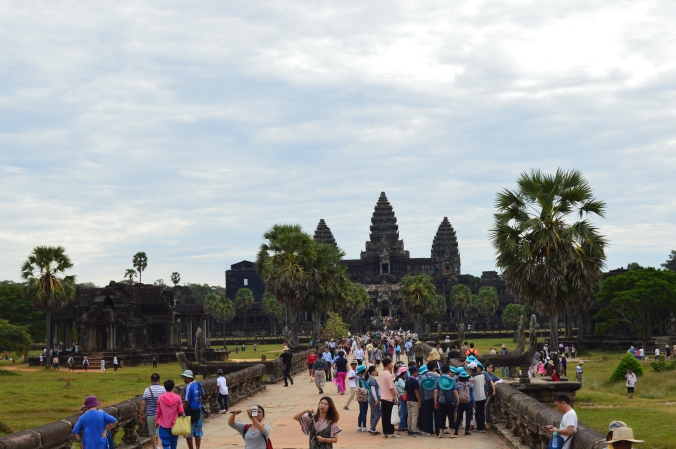 It’s not bad, in fact it’s pretty good, but it doesn’t compare to the first reveal of the Taj Mahal for instance (we haven’t just picked that at random, the comparison is a common one). That being said, the rest of the experience is brilliant. The carvings over every inch of wall are astonishing. 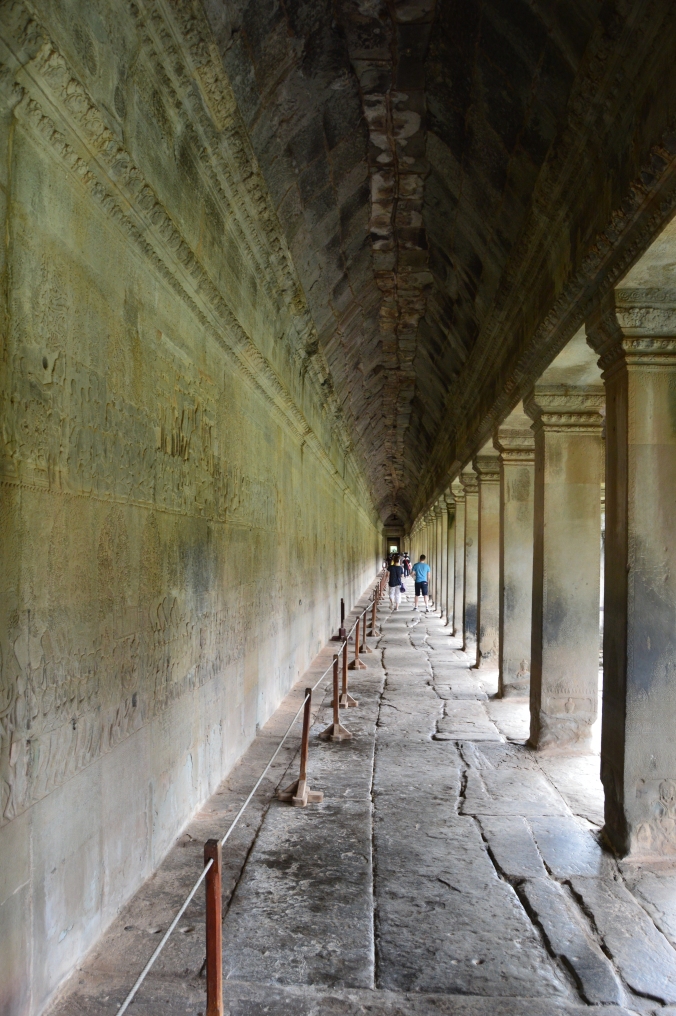 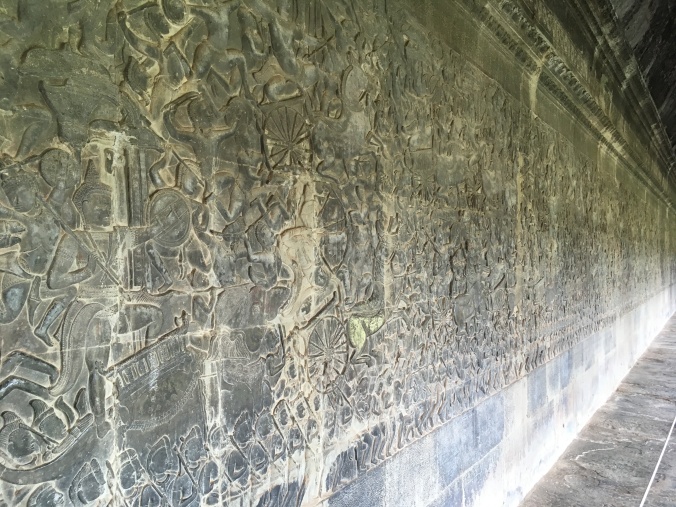 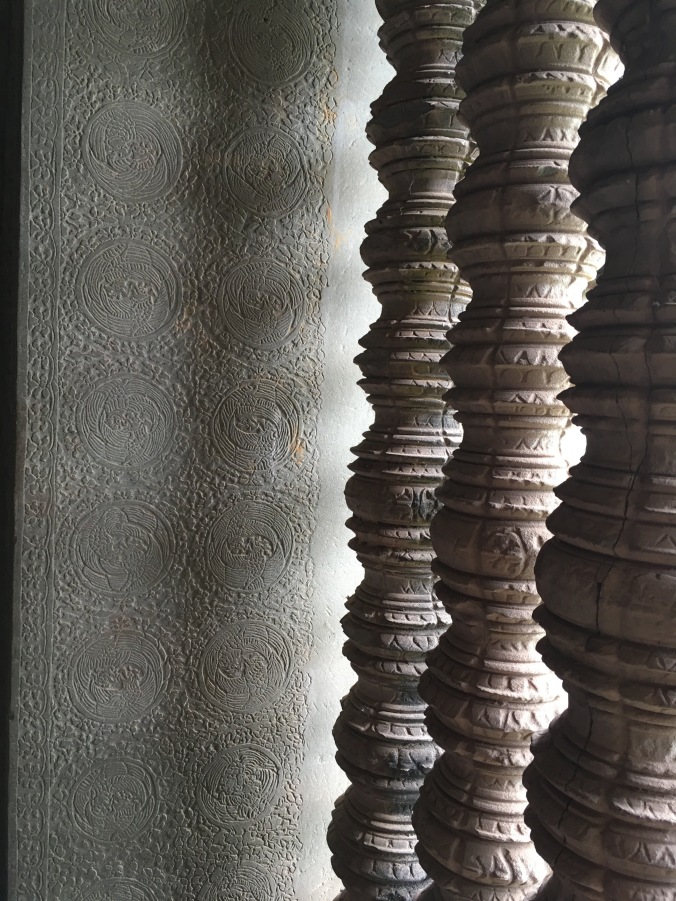 We had the south west corner of the wat almost entirely to ourselves and it was a beautiful, peaceful moment. 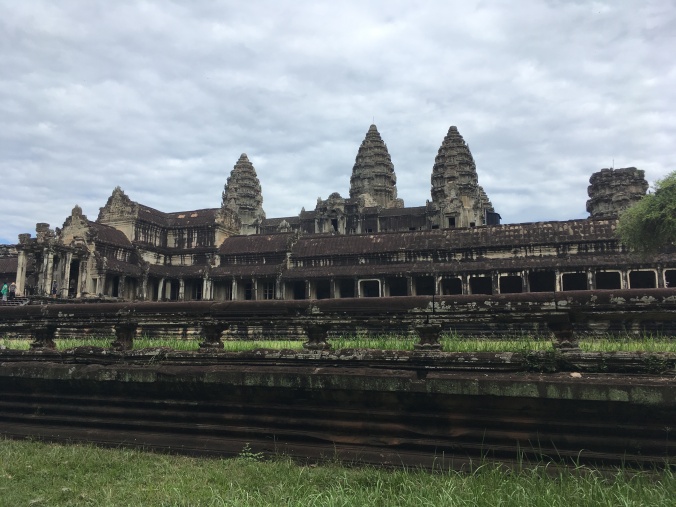 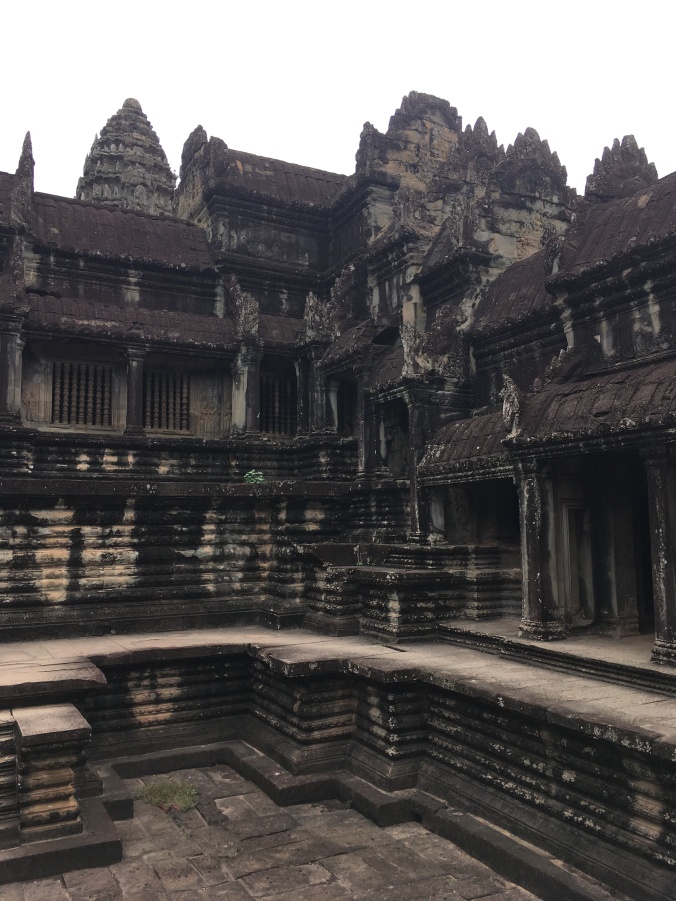 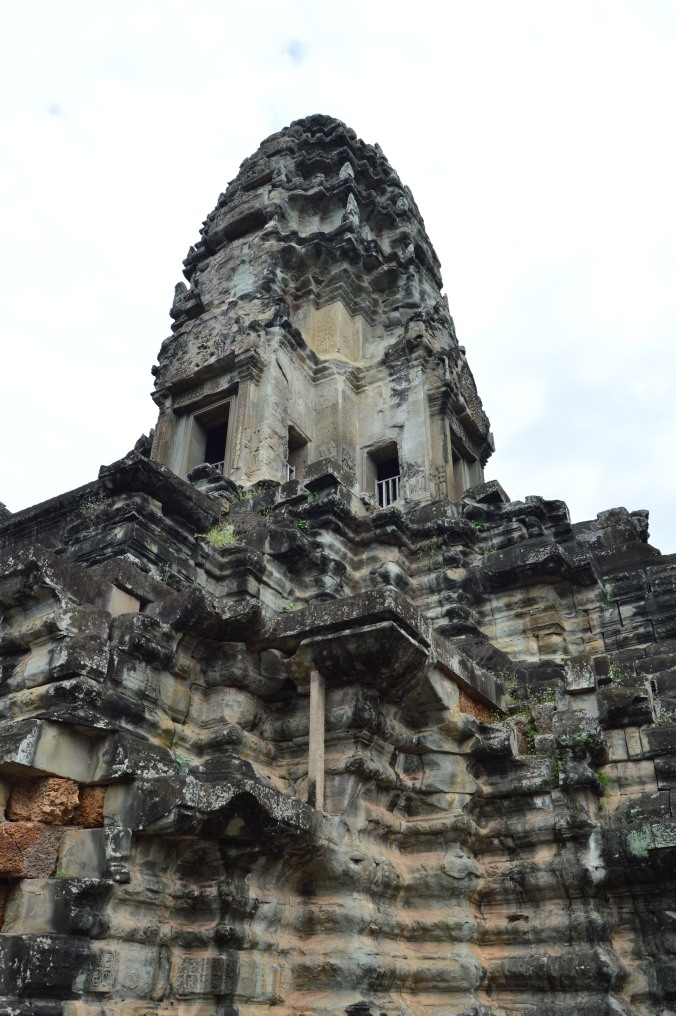 The closer we looked, the more beautiful it became. So, for us, it wasn’t that jaw dropping immediate wow, it was a slow burn. We were there for two hours and it just got better and better. 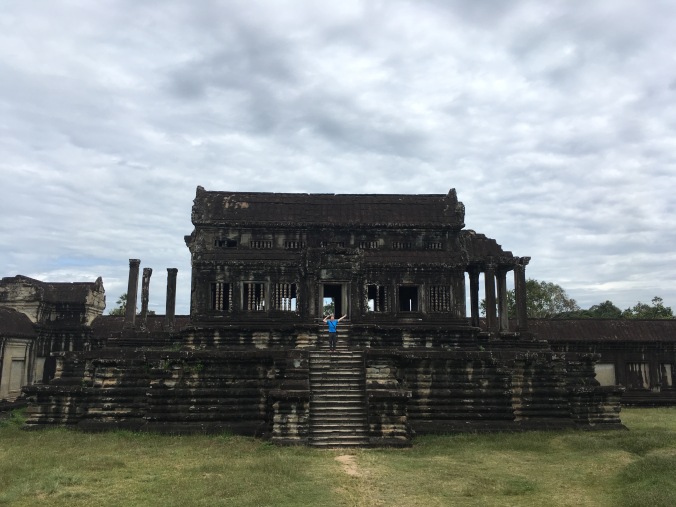 We aren’t going to go in to heaps of detail here because there is loads to see in Angkor Thom. We thought the faces at Bayon were incredible, we enjoyed the elephants of Elephant Terrace and the hidden carvings on the Terrace of the Leper King were a hidden treasure. 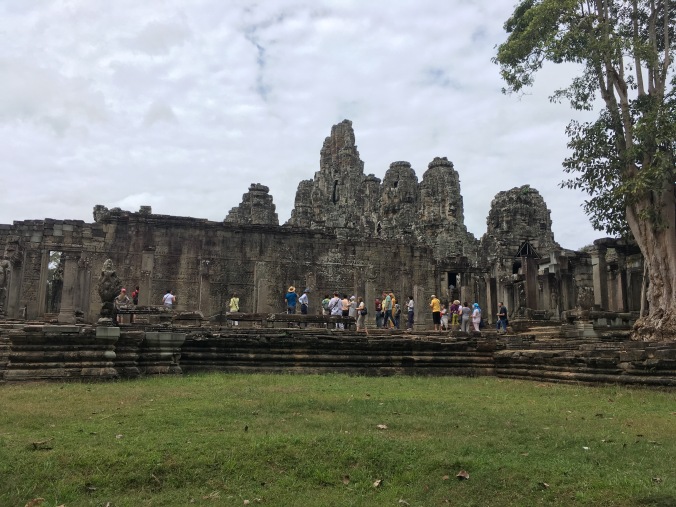 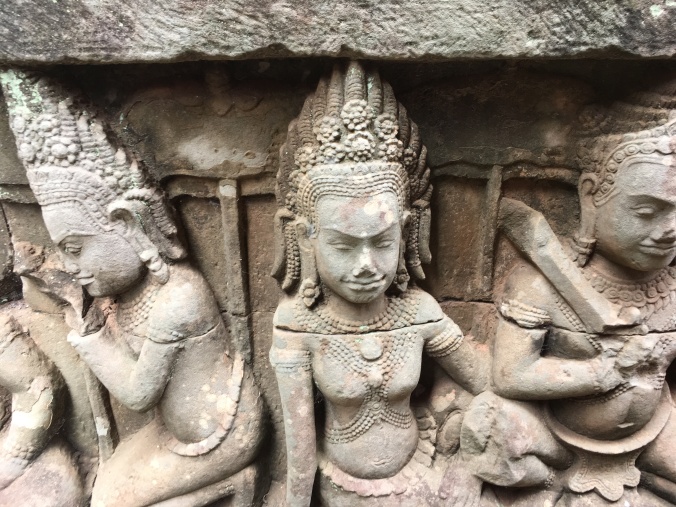 We loved these two small temples for their symmetrical simplicity and the fact that no one was there.

Ta Keo didn’t appeal at first as a large hulk of a structure which lacked the delicacy of the others. What you have here is the detailed information about the reconstruction, which makes it a fascinating stop.

For our money, Ta Prohm is the most beautiful and fascinating of the lot. It has been made spectacularly popular by featuring in Tomb Raider but the popularity is justified, it’s really cool. The whole place has been taken over by the forest and it’s a place where your imagination can really run wild. 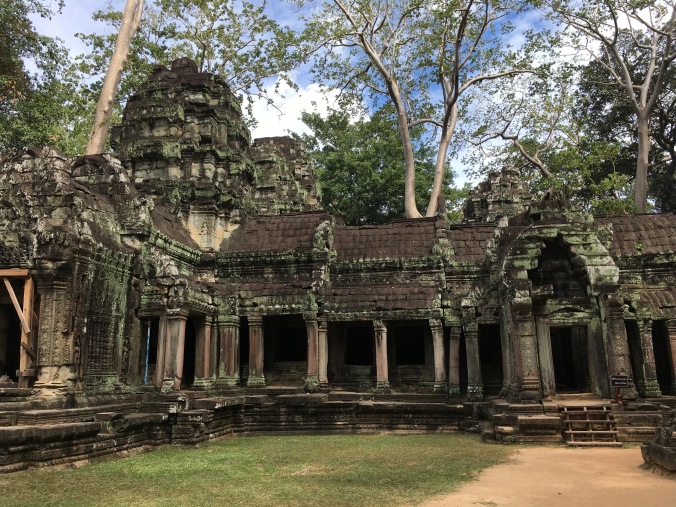 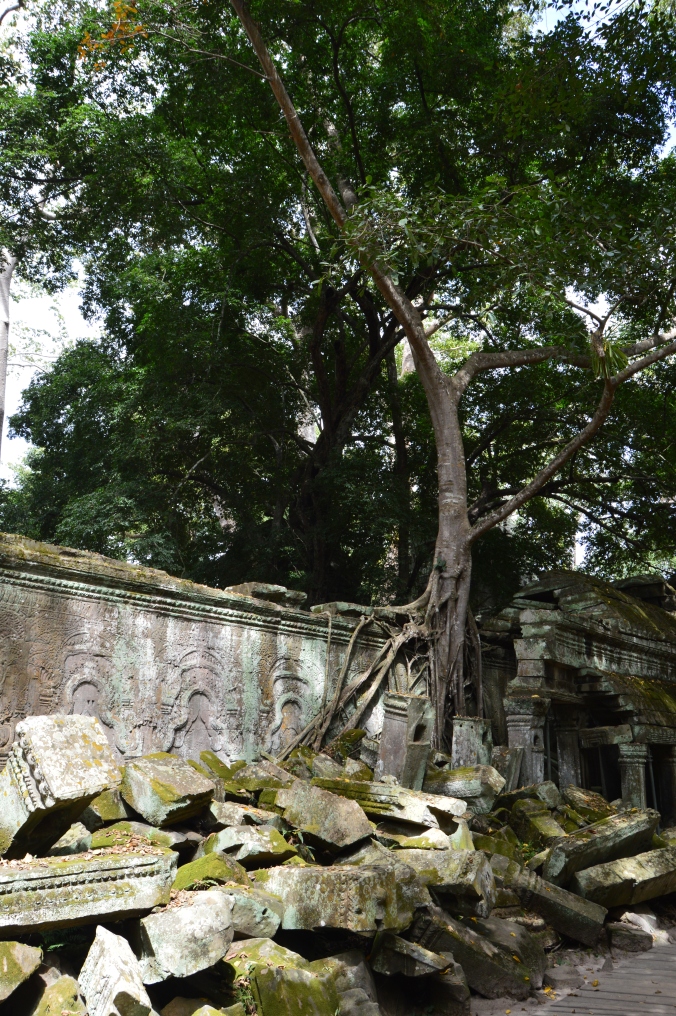 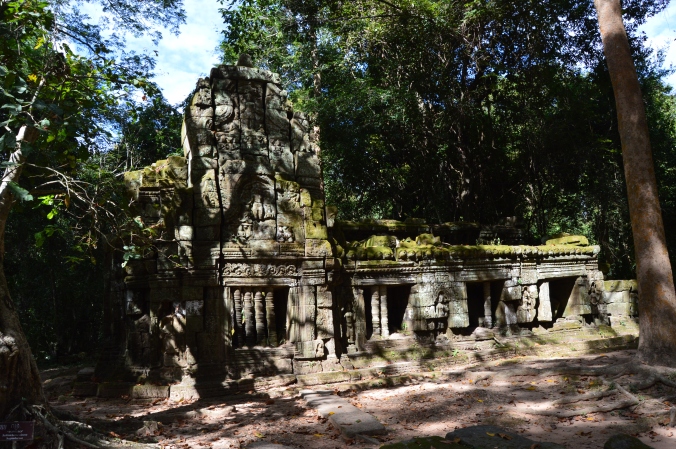 On our last day we had time to venture further afield and also to take in some of the lesser known temples.

It’s a long and lovely drive through rice paddies out to Banteay Srei. The further we got from town the more confident we were that the crowds would be small. We were wrong. It’s only a teeny temple and it was filled to bursting. It’s easy to see why because it really is a beautiful temple and a large portion of the carving is in perfect condition.

The Rolos Group are in the same general area as the main Angkor attractions but receive fewer visitors. The three temples all have their own charms. Lolei shows centuries of neglect but is now surrounded by scaffolding and will soon be given a new lease on life.

Our favourite of the three was Preah Koh, the only temple throughout the complex where some of the original plasterwork remains and where you can truly appreciate how gorgeous and ornate the temples would have been in their heyday. 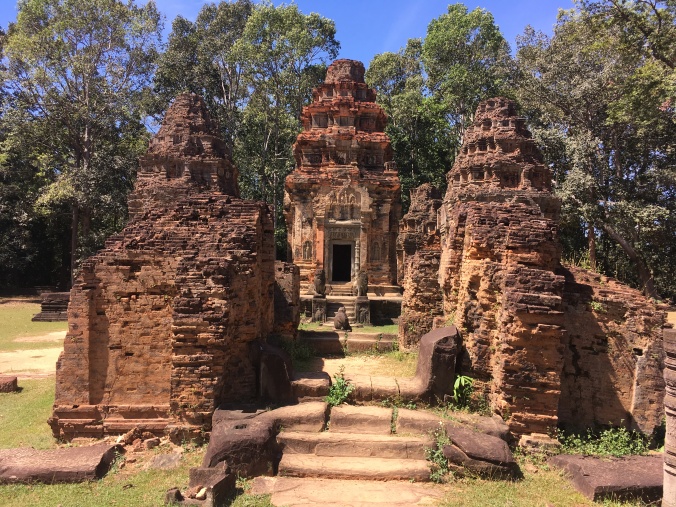 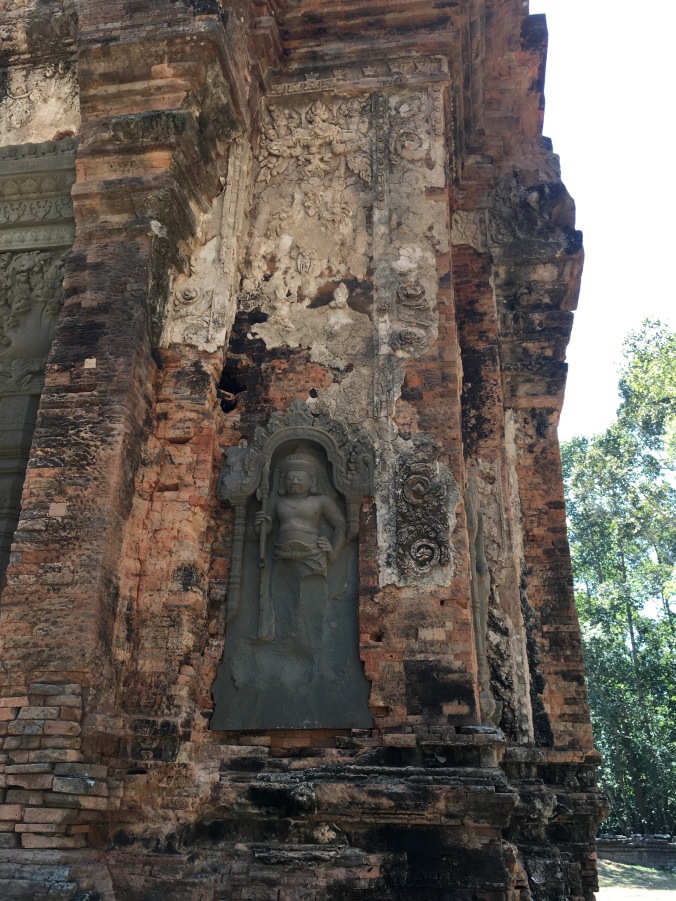 We were completely wiped out by our three days of temples and, to be honest, we probably weren’t on the top of our game for every single one so we can appreciate why people go back again and again. There’s so much to be discovered and if you were to take time to examine all of the carving you would be there for years and years. The temples are Cambodia’s premier tourist attraction and with good reason and we wouldn’t have missed them for the world. We were bloody tired though, just in time for an 8-hour bus journey to Bangkok.

One thought on “Siem Reap and the temples of Angkor”