Getting from Kampot to Battambang entailed a fairly epic, hellish bus journey via Phnom Penh. It was a typical south east Asian bus journey in that we never really knew if we were on the right bus and we were forced to entrust our futures to a group of young bus workers with whom we were unable to communicate. So, we got in a minibus with a nice French couple who were headed in the opposite direction to us. Cracking start. 20 minutes later we were bundled on to a very comfortable air-conditioned bus, the French couple were still with us but we did learn that this bus was going to Phnom Penh where we all needed to go. A very comfortable 3 hours later we were back in Phnom Penh and being offloaded at a bus office. No worries, we strolled over to the ticket desk and showed them our receipt. We were informed that our receipt had nothing to do with them and there was no bus for us. Fortunately, at this moment a grumpy man with a phone glued to his ear gestured firmly to us to follow him to his already overladen tuk tuk. The French couple were already there, we were obviously in this together for the long run. We tried to tell the man that we were going somewhere entirely different to the French couple but he was completely disinterested. 10 minutes later we were deposited at a ropey looking ticket office down a side road and the French couple were whizzed out of sight, we sincerely hope that they made it to their destination. The ticket office consisted of a shirtless man sat behind a desk eating rice and disliking us extremely. “Bus coming now” was all we got before he proceeded to ignore us. So we stood. 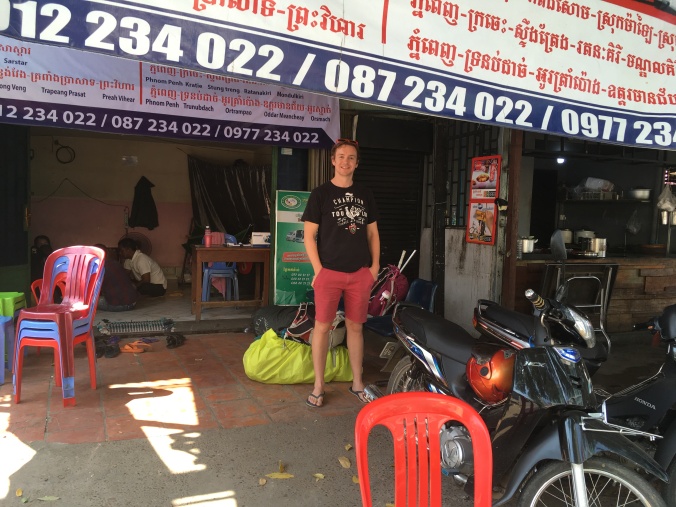 Miraculously a bus did arrive and shirtless got up enough energy to hit Caro on the shoulder and point at the bus; on we piled. The driver asked us where we were going in pretty good English and when we replied “Battambang” he said good and we were ushered to two seats. This bus wasn’t quite so luxurious as the last one; it had faded pink and gold fringing and an ominous pile of spare parts under the driver’s seat. But the seats were comfy and there was air conditioning. Unfortunately, the woman sat next to James was not a happy traveller and spent the entire journey with a plastic bag hooked off her ears. The journey from here was interminable, it’s only about 250km but it took over 7 hours. The bus stopped frequently to let people off and each time it was necessary to stop for at least 15 minutes. There were also two hour-long breaks for meals at places that seemed to specialise in dried fish and litter. Each time, James’s neighbour got off the bus and huddled on the ground looking utterly miserable.

By the time we finally arrived on the outskirts of Battambang our original driver had disappeared and there was no one who spoke enough English to tell us whether or not this was in fact the Battambang stop. A tuk tuk driver climbed on board and practically ordered us off the bus and in to his tuk tuk. It turns out that it was the right stop and we made it to our hostel, dumped our bags and ventured out in search of a quick evening meal. The streets were absolutely deserted, eerily quiet. It looked a bit like the set of West Side Story, we half expected a group of lads in jeans and white t-shirts to come step-ball-changing around the corner with much finger clicking. Sadly, this didn’t happen. We had dinner and then all we wanted to do was shower and sleep. We got back to the hotel and discovered that the toilet didn’t flush, necessitating a change of rooms at 9:30pm with an increasingly grumpy chicken. Our new room was at the front of the hotel with a view out to the neon sign. We hung our towels over the window to try and cut out some of the light and get some sleep.

In conclusion it was a bit of a mission to get to Battambang and it was not delightful on arrival, we hoped that things would improve.

The next morning we had to move rooms again, the balcony door didn’t lock. But we were finally organised and set out on a walking tour of the town. Battambang is an interesting mix of Chinese and French influences, with a couple of big markets and a riverfront thrown in. So, a nice spot for a morning of strolling. There were more people on the streets during the day but still not overwhelming. It was pretty toasty. We weren’t dressed appropriately for temples but we admired them from a distance.

The main features of the town were the old Chinese shophouses and the French colonial architecture, which is liberally spread throughout the “walking streets” just south of the river 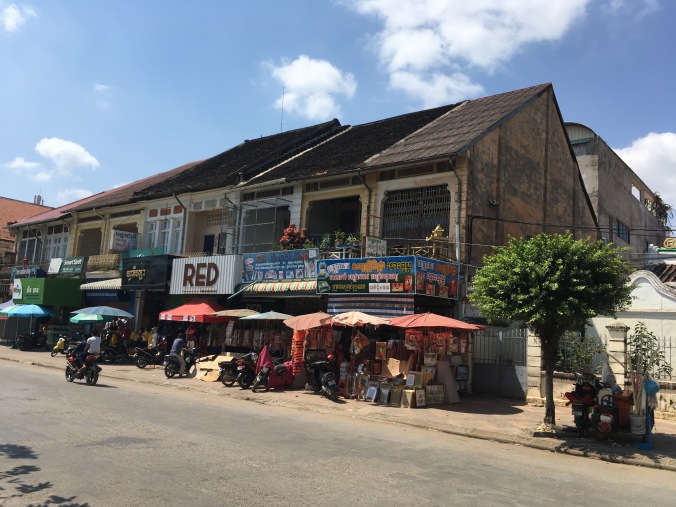 We concluded our tour with a walk along both banks of the river Sangker, on the west bank  there is a slightly ropey looking food market in which we were fairly convinced that people were living. On the east bank of the river there is a lovely promenade which seems to be fairly well maintained. Steady effort seems to being made to spruce the town up a bit and we imagine that it will only continue to improve. We learned at lunch, from a sensational Canadian man who we will tell more of in a minute, that UNESCO is piling a fair bit of money in to the “walking streets” to reconstruct and preserve the shophouse buildings there. It certainly has the feel of a heritage site in the making and it would be interesting to come back again in a few years to see the changes.

For lunch we went to Bar Ang, a relatively new restaurant owned by a Canadian chap called John. The food was excellent, we had delicious spring rolls and the best amok that we have had in Cambodia. We should specify, the cook is Cambodian.

We were also served an excellent iced lime/honey drink which was the perfect antidote to a very hot day. John does not mince his words. He knows a good bit about Cambodia and also a fair bit about the inner workings of Battambang which were fascinating to hear. We just sat there and listened to him chat about, amongst other things, his business, Chinese influence in Cambodia, his new wife, growing marijuana, older white men getting trapped by young Asian “starlets”, travel, his children back in Canada, how best to rehydrate on hot days, etc. etc. etc. He also wanted to hear all about our travels and clearly soaks up anything he hears from anyone. He was fascinating, in the short period of time that we spoke to him we learned that he had been a commercial diver, a taxi driver and run a hostel. These are the people that you hope to meet whilst travelling.

That evening James was determined to watch England versus South Africa which did not kick off until 10pm. Watching games in random bars is always an excellent way to meet people and this was no different. He watched the game with two south Africans, one who was Cambodia Beer’s sales director who invited us to stay and an English couple. It being an incredibly small world meant of course this guy was also a Norwich fan and had grown up in the neighbouring village to James, though they had never meet before despite being the same age.

An England and a Norwich win, combined with many beers left James and his fellow canary happy.

We had intended to rent bikes on our second day in Battambang so that we could explore the surrounding countryside, which is supposed to be beautiful. We hadn’t set an alarm because of the late night the previous night and by the time we surfaced for breakfast, setting foot outside was like walking into a blast furnace. When we are out on bikes we can handle considerably more heat than on foot but we were really concerned that we would get ill in some way if we spent too long out in the heat, the walk to and from breakfast was completely exhausting. So our second day was spent indoors working on admin. Never mind, we would see plenty on our boat journey the next day.

We rose bright-eyed and bushy tailed the next morning so that we could get to the boat early and claim the much-coveted front seats away from the engine. When we had bought our tickets that man at the very official looking trestle table next to the river had written “front see 1” on our ticket and we felt pretty certain that this would have absolutely no impact whatsoever on the seats that we ended up with. We were correct. Plenty of other people had already made it to the boat before us and “front see 1” was occupied by plastic bags of dried fish.  We still managed to get seats well away from the engine although unfortunately on the sunny side of the boat. When we initially set off we worried that we had made a big mistake in getting the boat; the river was filfthy with litter.

Fortunately, after about half an hour the water cleared out and the development on the banks turned in to lush green plants.

We passed the odd fisherman working on their nets and we occasionally passed another boat but for the most part we had the water to ourselves. The river began to narrow to the point we were being wacked by plants on the banks on both sides of the boat.

We soon emerged in to what appeared to be an enormous flood plain, covered in lilies, partly submerged bushes and fishing boats/houses. 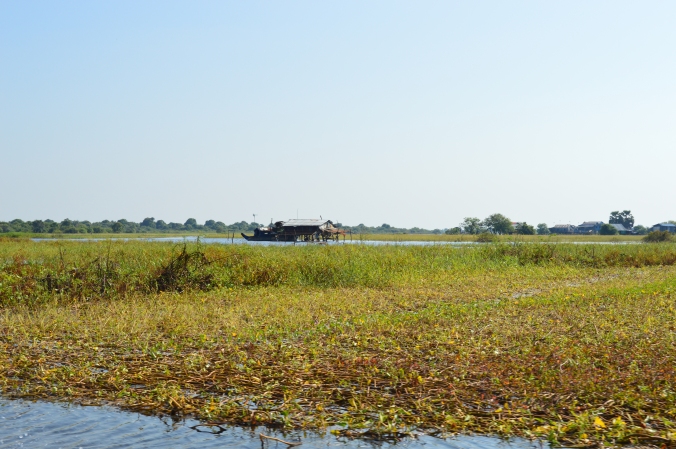 We chugged on through many floating villages and regularly stopped to drop people or supplies off. Often a boat would paddle out to us to make an exchange of goods or people, including a monk when we passed a floating temple. 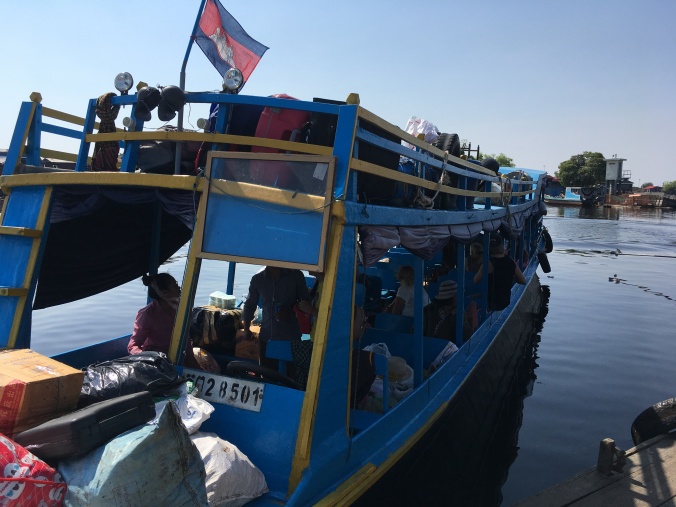 The floating villages were really interesting to see. The schools raised on stilts with boat moored around them, the shops, the boat repair shops, floating chicken coup and people’s houses. The water seemed to go on as far as we could see. We are not sure how far the waters recede as the dry season progress but it is a really beautiful part of the country. We also saw lots of bird life, including many of one our favourite species bird, the Kingfisher. 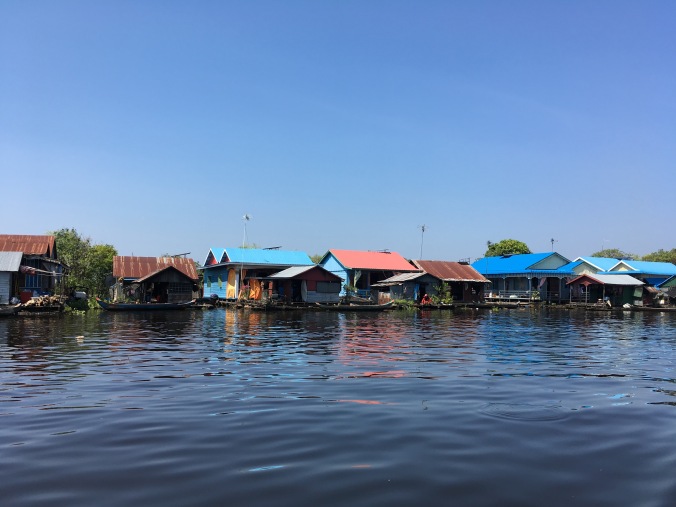 The final leg of our journey took us across Tonlé Sap Lake and in to the ferry port. We disembarked and were met by the usual mass of tuk tuk drivers, but here they had set up an association and we got a set price for the 15km journey to Siem Reap.

The boat journey was a really interesting way to get between Battambang and Siem Reap. It took about 3 hours more than the bus, bit it gave us a cool insight to the lives of people living in the floating villages and we saw a lot more of the country than you do from a bus seat.  Battambang was a nice stop for a day and we thought that it was worth it to be able to take the boat up the river to get to Siem Reap.