We left Vientianne bemused; we weren’t really sure what, if anything, we had just experienced. It’s a strange city, very understated save for a couple of notable examples, and well earns its reputation for the sleepiest capital city in the world. Getting there was the usual nightmare, Laotian bus travel has not been a high point for us, and our hotel was an odd place but the AC was really effective which would turn out to be a vital aspect of our Vientiane stay.

On our first morning with lathered on the suncream and set off on a walking tour. 30 minutes later we were dashing back through the door completely soaked through as the heavens had opened Asia-style, drenching everything within minutes. 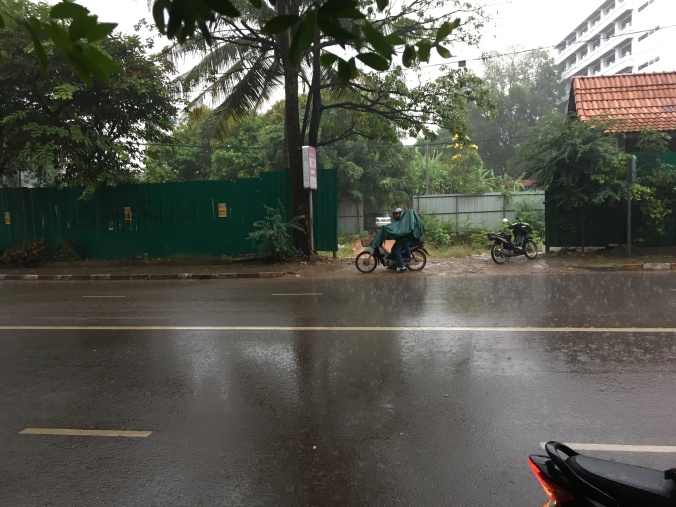 2 hours later the rain had stopped and we set out again, stopping for lunch at a roadside stall run by the smallest, campest man who was vastly overdressed in skin tight white jeans and a bedazzled leather jacket. Filled up with cheap and tasty noodles we went first to look at Vientiane’s answer to the Arc de Triomphe, the Patuxai.

It’s not the prettiest thing in the world and the plaque on the arch itself even calls it a “concrete monstrosity” but to be perfectly fair it is unfinished and the decoration underneath redeems it a bit.

Next up was Pha That Luang which is so gold that it is painful on the eyes on a sunny day.

At next door Vat That Khao you can see a huge reclined Buddha, also painted in gold. 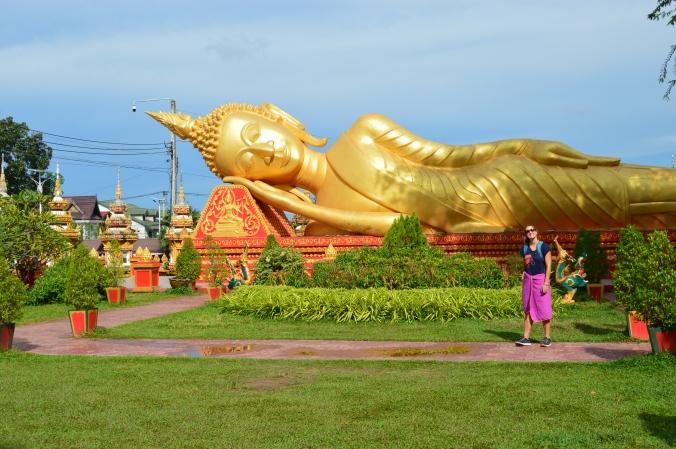 Caro can be seen here sporting this season’s must-have traveller accessory, the Decathlon quick dry towel which comes in variety of different jazzy colours. It does lead to embarrassing situations because everyone has tone and everyone wears them to temples and it’s just a bit awkward when you show up in the same outfit.

Our second day in Vientiane was perhaps the most rewarding. A short walk from our hotel was the Presidential Palace which looks wildly over the top amidst a very ordinary looking city.

You can’t go in, we just passed in on our way to Wat Sisipak, Vientiane’s oldest Wat and probably the most beautiful place we saw in the city. You can feel the age of the place, there’s a splendid weight to it. The wat is lovely but we felt that its setting was what made it really special. It is surrounded by a low slung gallery and an open paved area which is filled with the reflected light of the lovely yellow buildings and was bright with leaves and flowers. It was a very peaceful spot.

From the most beautiful we moved on to the most interesting place in town, the COPE Visitor Centre. It’s a hot and not particularly pretty walk to the centre but it’s worth it. COPE is an organisation provides support to people who suffer from mobilitiy related disabilities, including those who have been victims of UXO accidents. The Visitor Centre has a lot of the same information that we learned at Phonsovan about the Secret War, so if you don’t go to the Plain of Jars you can get all of that info here. We skipped that section and focussed more on the work that COPE does. A fascinating visit. 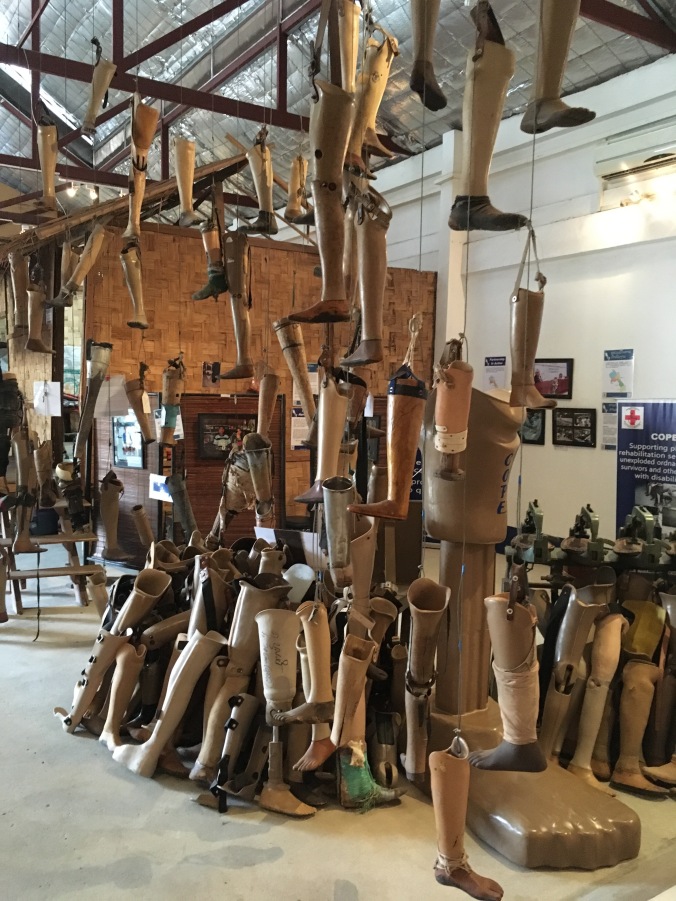 We walked back to our hotel along the Mekong river. We had read plenty of blogs where people had said it was a nice place for a walk or perhaps an evening drink. Maybe we were there at the wrong time of year but it was not a nice place for either of those activities, it was grim.

There was some kind of celebration going on in Vientiane, we aren’t entirely sure what it was in aid of but we think it was for the annual dragon boat races. In any case, the roads immediately behind the waterfront were closed to vehicles and hundreds of stalls had been set up. It was like a night market on acid. The stalls were absolutely groaning with crap and every second one was equipped with a loud speaker through which people were screaming at the heaving crowds. It was absolute torture and we lasted 5 minutes before we bailed and went to find somewhere quieter for dinner.

On our last day in Vientiane we went for massages; it’s one of the things that you are supposed to do in Laos. As we had nothing else planned for the day we thought we may as well go for good long treatments. Caro opted for a body scrub followed by a full body massage, and it was quite an experience. Please bear in mind that full body means full body and Caro was therefore not clothed for the entirety of this experience. The “room” was an area at the far end of a larger room with a privacy curtain that did not quite stretch the full width of the room. There was a bath just freestanding at the end of the bed.

The body scrub itself was excellent, once it was over the woman (who spoke absolutely no English) gestured in the direction of the bath and left the room. Caro could not for the life of her get the water to run so stood for several minutes completely covered in drying scrub debating whether she should wrap up in a towel and try and find someone in reception. She came to the conclusion that this would be a singularly mortifying experience and opted to just stand there and wait for the woman to come back. When she did arrive and was faced with Caro covered in what was now completely set body scrub she rolled her eyes and ferreted around under the bath for a tap to turn the water on, as if this was perfectly obvious. Caro sheepishly crept in to the bath under the beady eye of a thoroughly unimpressed masseuse. Things improved dramatically once the bathing portion of the day was over and the massage itself was very good. Overall it probably didn’t have the relaxing effect that Caro was after, being overshadowed as it was by the prospect of having to creep around a salon in the middle of Vientiane wearing just a towel and looking like set oatmeal.

Vientiane was a bit of a mixed bag for us. It’s so peculiar for a capital city to have such a low energy level, but that makes it kind of interesting. Kind of. There are some sights to see but not many and you can get a massage anywhere in Laos. It feels a bit like you go to Vientiane so that you can tell other people that they don’t need to. It’s strange because it actually epitomises Laos, being slow-paced and unassuming, and that’s a huge part of the appeal of the country, but it’s the last thing that you want from a capital.

So, Vientiane wasn’t exactly the high point of our Laos trip but it did bring it to an end. We were ready to move on and at the time we felt that perhaps we had stayed in Laos a fair bit longer than we needed to. But then we actually thought about it; we thought about going full blown traveller in Luang Prabang market, kayaking through gorgeous Nam Ha, being completely mystified at the Plain of Jars, sitting in an inner tube and watching the world go by in Vang Vieng, taking in the breath-taking scenery as we travelled around and having the very real pleasure of learning so much about a place we barely knew. Surely this was why we had gone travelling in the first place. So, when we look back now, sure we don’t feel the need to rush back, but we are so glad that we have been. Laos is a very special country.