This blog is two Hanoi visits combined in to one; we stopped over for a day between Lan Ha Bay and Sa Pa, and then came back again after Sa Pa but we thought it would be easier to just smush it all together into one. Our first hotel in Hanoi hadn’t particularly blown us away, so we decided to spend a couple of extra dollars a night and upgrade a bit. The difference was quite extraordinary, it felt luxurious and the staff couldn’t have done more to help us. Hanoi is the ideal place to treat yourself, because a little bit goes a really long way.

We found ourselves in town for the Mid-Autumn Festival and the full moon, which just so happened to fall on a weekend, so our first proper experience of Hanoi at night was to witness the city on speed. We knew that the lake area was pedestrianised on weekend nights so we went there first. We passed by one or two stands but there wasn’t really a market at all, just a few people selling balloons, bubble blowers and flashing headbands. Despite the lack of an obvious activity there were thousands of people there, walking with speed and purpose around the lake towards we knew not what. 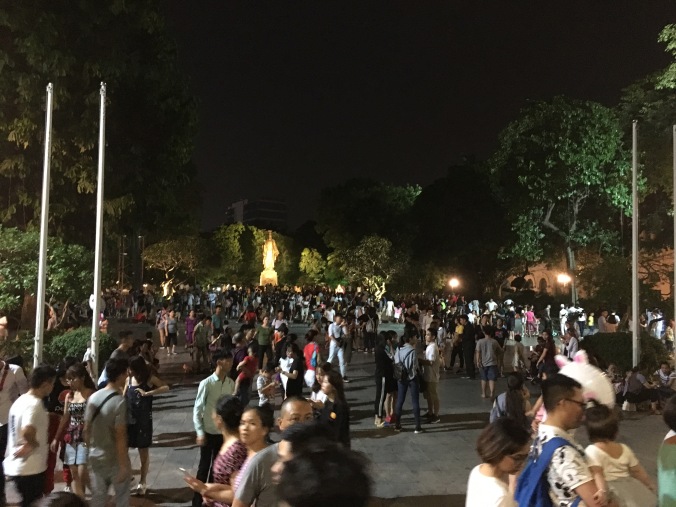 We joined in to see what the fuss was about. In amongst the walkers, large areas of road were taken up by sitting groups of people playing with building blocks or boards games drawn on to the tarmac with chalk.

We finished our loop still unclear where everyone had been walking to but having enjoyed some wonderful people watching on the way round.  We tried to plough our way back through to the Old Town. The gridlock was so bad that even pedestrians weren’t able to weave through the scooters. A thoroughly depressed looking policeman stood amongst it all looking despairingly around him not even bothering to give instructions anymore.

Hanoi at night, particularly on a weekend, is quite a sight to behold and we were so glad that our visit coincided with such a big event. We actually spent two separate weekends in Hanoi so can confirm that whilst it was another level entirely at full moon, a regular weekend is still a lot of fun.

Caro didn’t need another reason to love Hanoi, but the possibility of wearing pyjamas all day every day is pretty much her idea of heaven and it’s a reality in Hanoi. Having done a few double-takes during our first couple of day we soon realised that pyjamas are practically haute couture and from then on it was just a matter of getting a picture of the finest set that we could find.

The night market is also on Friday, Saturday and Sunday nights so we made this our next stop. It was also heaving. The stuff on sale was mainly clothes and a few souvenirs, but it was definitely worth seeing. The main sale item appeared to be pyjama sets which double as day wear for the women of Hanoi. Caro was particularly interested/jealous of the comfort level and outrageous array of patterns being worn.

We stumbled across ‘Beer Street’ which is rammed with bars which in turn are rammed with locals and tourists alike. The tables and stools spilled out on to the pavement and road, leaving about 30cm of walking space. It was as crazy and claustrophobic as you imagine.

We had been on the hunt for Bia Hoi, a local home brewed beer which sells for about 15p a half. Hanoi is famous for it but interestingly you can’t find any on beer street. We eventually tracked some down around the corner from our hotel and it was either delicious or tasted like vinegar. 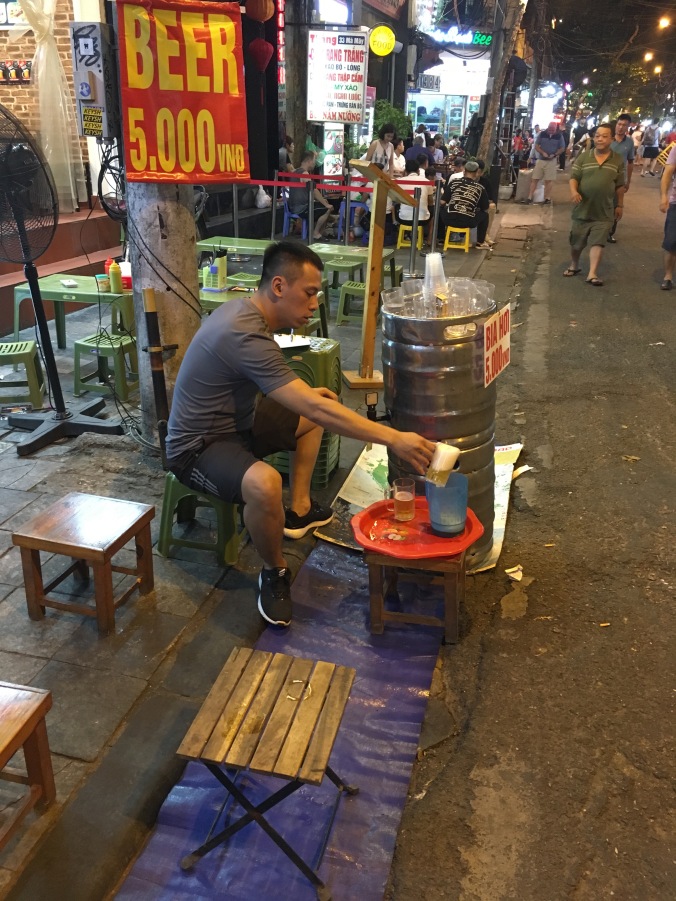 On our first stint in Hanoi we had attempted to visit Ho Chi Minh’s mausoleum but failed to get in due to Caro’s lack of sleeves and her unwillingness to purchase an ugly and expensive scarf, so this time we attired ourselves appropriately. The visit to the mausoleum itself is entirely controlled; you have to walk in two straight lines, stopping at a guard every couple of hundred metres or so before being motioned on. You also have to be silent. We had done absolutely no research and we don’t know what we were anticipating but we certainly didn’t expect to be confronted with Ho Chi Minh himself, lying in a glass box. We knew that he was in there, we just hadn’t reckoned on seeing him. Now perhaps you think us foolish for not expecting this, but regardless, we are sure that you can appreciate the unpleasant sensation of unexpectedly arriving in a room with an honest-to-goodness dead body.

The presidential palace and surrounding gardens are pretty to look at but didn’t hold a huge amount of appeal beyond this. As with all museums in the region, they had a car collection for you to look at. Again, we don’t find much to interest us in looking at a beaten up 30 year old Toyota.

The site is also home to a very odd museum which seemed to try and merge modern art with the history of Vietnam and Communist party propaganda.  It was possibly the strangest museum we have ever visited. It did have some interesting exhibits, but the continuous rhetoric of how wonderful the Communist party is was a bit much for us.

Our next stop was the Temple of Literature, a 15 minute walk away. It was a little haven of tranquillity within the madness of Hanoi. We rented an audio guide and would definitely recommend it, as there is little signage to give back ground on the temple and architecture. 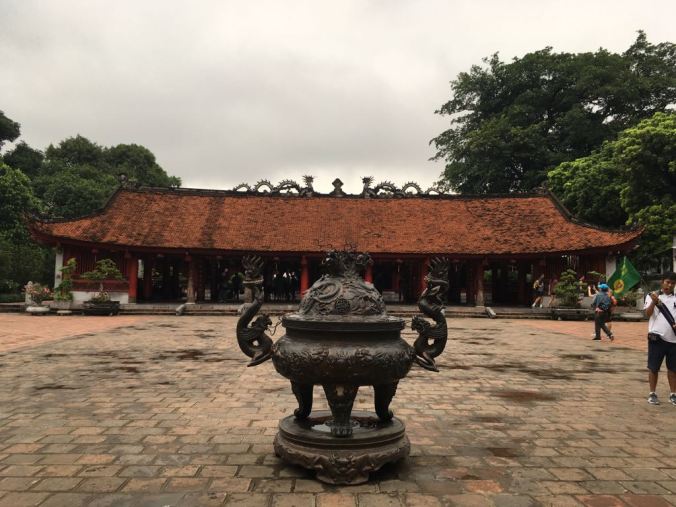 That night, we chose to go and see some water puppetry. We had umed and ahed about it but it costs next to nothing and some people had raved about it so we thought we may as well.  Aside from a brief intro in English, the entire show was in Vietnamese, despite the fact that the place was packed with tourists. Naturally, we understood very little of what was going on, but the clever puppetry is done is such a way to make it funny and very entertaining. It was the perfect length at just under an hour and was jolly good fun. 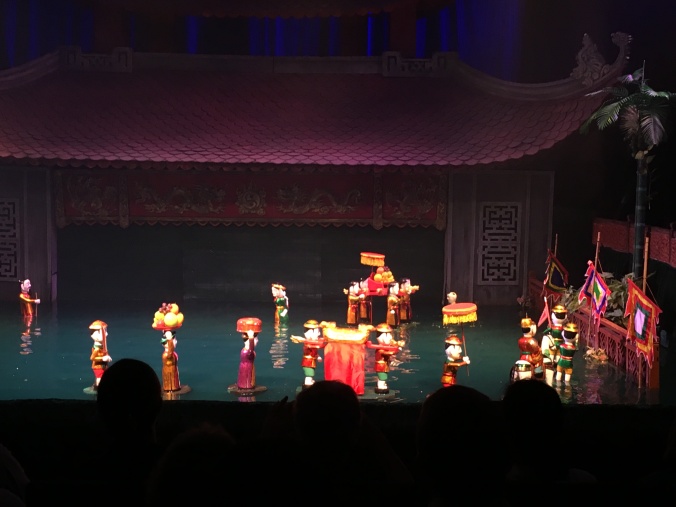 We’d held off doing any souvenir shopping up to this point but decided that it was time to pile in. James has become quite the haggler with the tactic of throwing out an unreasonably low number and not budging, throughout these exchanges Caro stood sheepishly behind looking apologetic. Not going to lie, we got some pretty good deals. 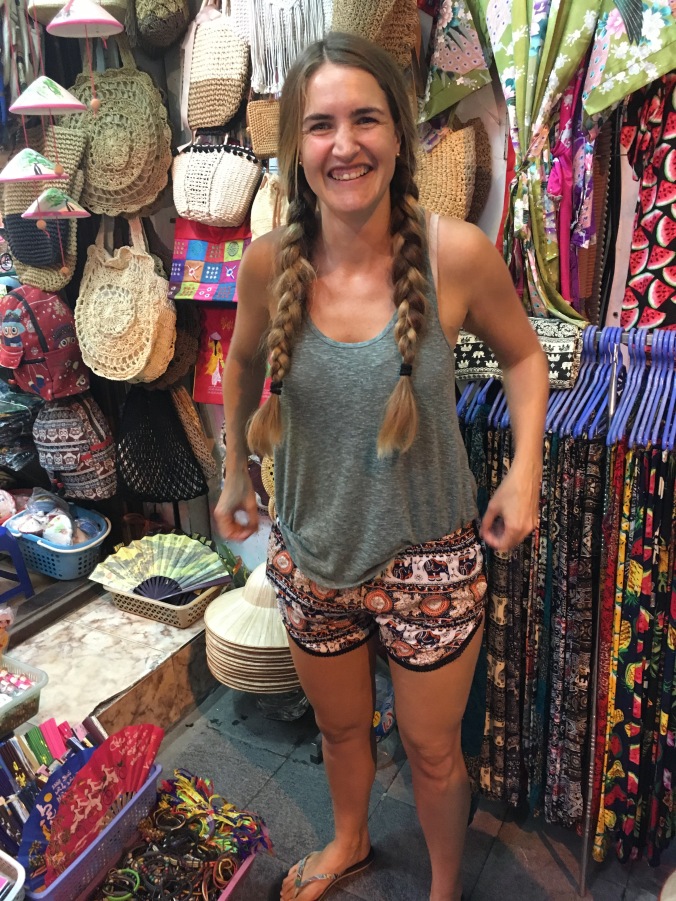 We managed to persuade ourselves that we should go for another run around the lake and this time managed two laps, well nearly, and it was worth it to see people playing a morning game of badminton in the middle of the street. 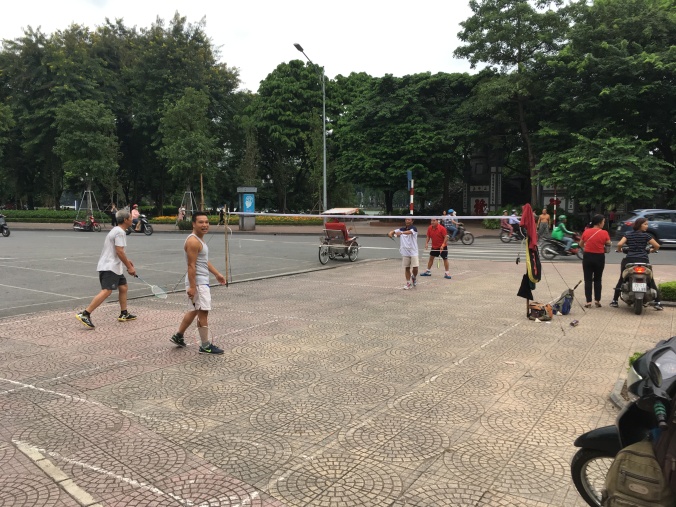 We had a couple of places left to see in Hanoi, the Women’s Museum and Train treet. The Women’s Museum was fantastic, we spent an hour and half there and it flew by. We have chatted with others who did twice that. Try and ,ake time to go. The information on women’s role in Vietnamese society and among the different tribes is very interesting, as is their role in the war with the USA. It also had a couple of interactive displays which gave insight in to rural life and provided great amusement.

Train street has become famous because of Instagram, but it is still really cool to see how people live inches from the tracks. There was no trains when we visited but you could certainly appreciate how it would make the houses rattle when they did pass.

After dinner that night, James decided he really should enjoy a few more Bia Hoi before we left Hanoi. Once again the streets were packed and this time our Bia Hoi street had turned in to an outdoor concert where a local band were crooning away, it wasn’t half bad either.

Caro stuck to water but James decided to continue sampling different Bia Hoi suppliers along the street. This turned out to be a terrible idea. The next morning his head was pounding and we had to travel. The rumours we had heard were true, Bia Hoi gives a hideous hangover, so factor it in to your time plan when taking advantage of 15p beers.

And so we left Hanoi for the third and final time. Usually after this amount of time we are ready to move, and we were keen to see something new, but we also could have stayed longer. There’s always next time!