Via an overnight stop in Bali we arrived in Hong Kong to visit friends Sam (Dudders for those who know us well) and Katie who moved there earlier in the year. We were both excited to see friendly faces and to stay in our friends’ lovely flat rather than questionable guesthouses.

Hong Kong airport and the MTR are super efficient, and we were soon stepping out at Hong Kong Central and being greeted by Sam. A short cab ride later and we arrived at their flat, complete with roof top infinity pool overlooking the harbour. It was going to be a tough few days.

In all our excitement, we had paid little attention to the weather warnings for Hong Kong saying the strongest Typhon ever recorded was going to hit in a few days’ time. But more on that later.

On our first evening we ate much craved western food, which meant steaks all round, drank a few to many beers and had a catch up. The next day Caro had arranged to meet up with an ex work colleague so we walked in to central taking in the city and goings on around us. We had both liked Singapore but Hong Kong had more of real feel for us. It was a bit grubby round the edges, like it could do with a good clean.

Caro meet with her friend at the HSBC building and we killed two birds with one stone by taking in the iconic building at the same time. There is permanent display of the history of HSBC in HK below the building which is really interesting and includes a wider description of HK as well.  Well worth the 15 minutes it takes to read for a free history lesson.

And for good luck you can touch the feet of the two HSBC lions Stephen and Stitt. 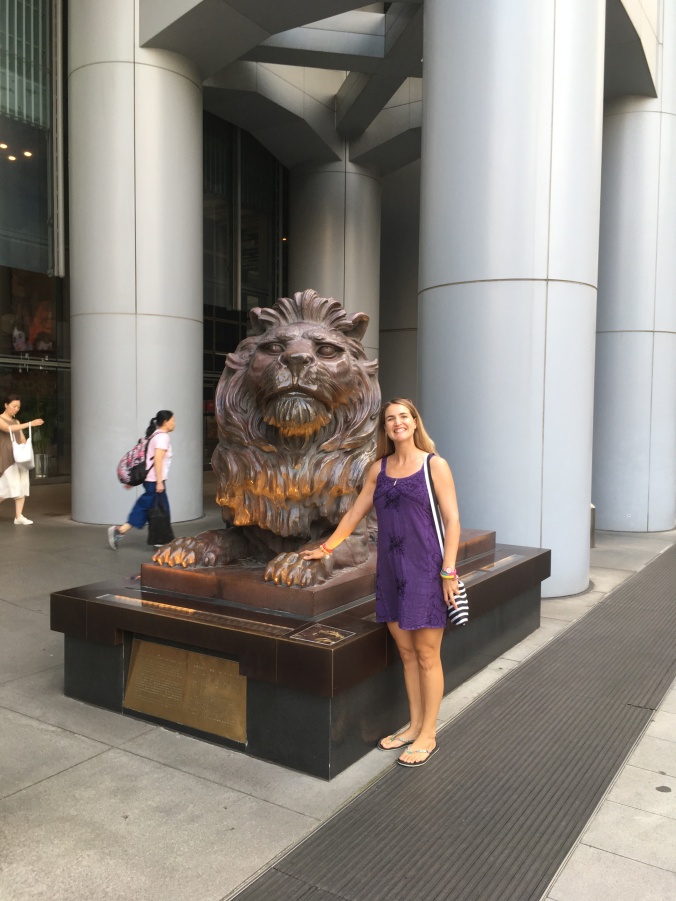 James met Sam for lunch and took a tour among the Central Mid Levels, excitingly taking in the world’s longest outdoor escalator system. Hilly Hong Kong is littered with escalators on steep hills to help you out. For lunch James and Sam satisfied another western food craving with a burger and tried to go for a beer in a roof top bar. Unfortunately, being scruffy backpackers and not owning a pair of trousers or shoes other than hiking boots, we didn’t meet the minimum requirements for high rise drinking establishments. This was not the only time our attire let us down in Hong Kong and even being Gweilo (westerners), which lets you get away with a lot in Hong Kong, didn’t help us out.

Next up on the HK to dos was a trip on the Star Ferry across the harbour. We boarded the iconic green and white ship and chugged across the harbour to Kowloon. The return leg is definitely more impressive as you get the full view of the city skyline. 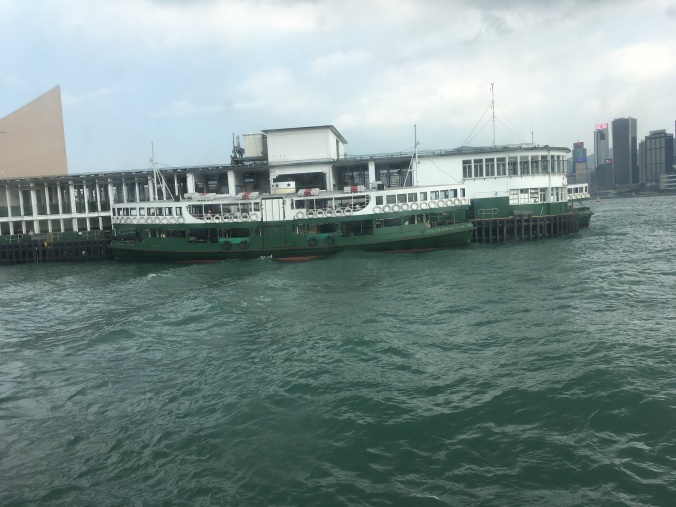 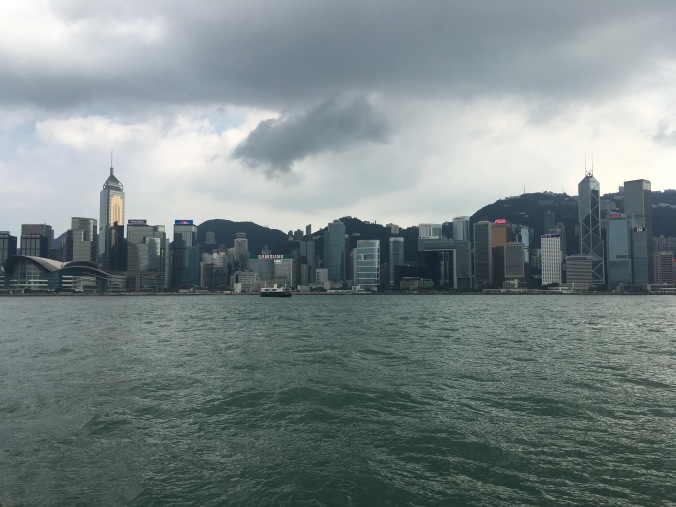 That evening we joined the queue of other tourists to take the tram up the peak. The views over the city and harbour at night are amazing. It is definitely worth a trip up to see. 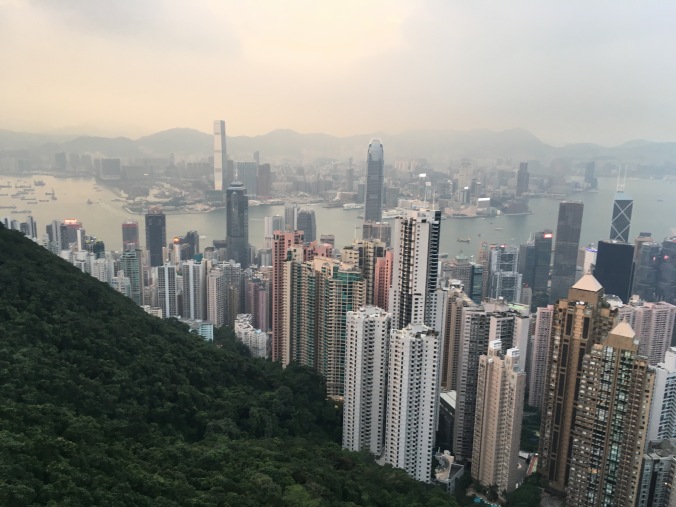 Being Friday night, it was beer o’clock so we toured through a couple of bars, meeting up with another former York university rugby player who lives in HK. A theme which continued for the next few days, by the end of our trip we could have cobbled together a team.  We topped the evening off with yet more steak.

The next day, feeling a bit muggy headed and knowing we were most likely to be inside all day Sunday due to Typhon Mangkhut, we did a very sweaty walk up the Peak. It is an awesome walk and well worth the effort, especially as you are rewarded by the views once you reach the top. 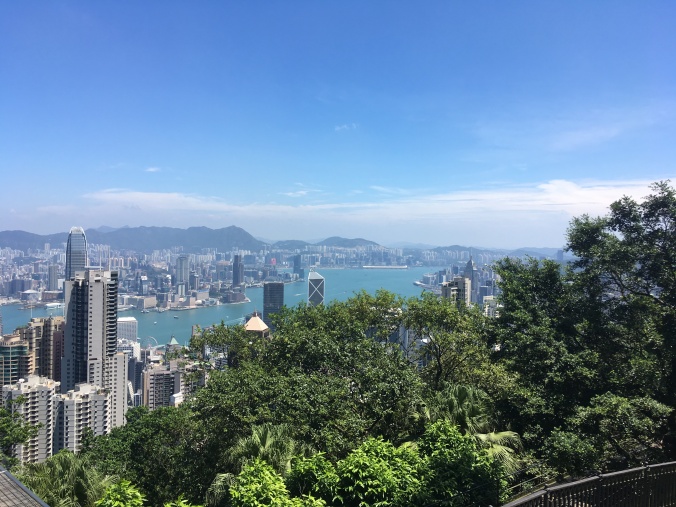 As a reward for our efforts we cooled off in what has to be one of the best roof top pools in Hong Kong. 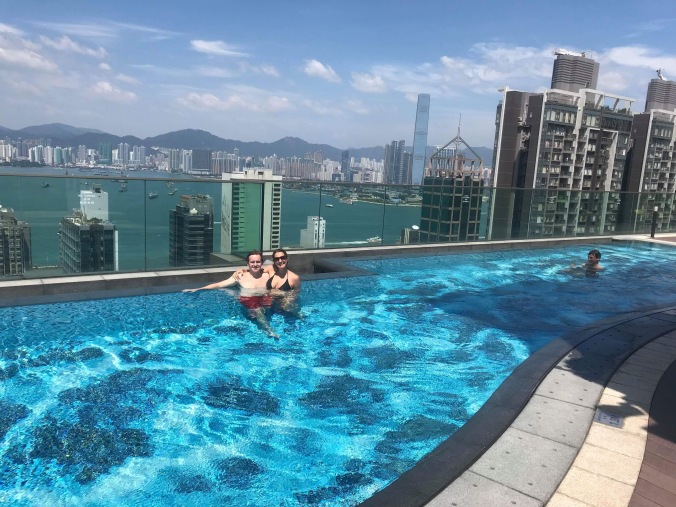 After a small mishap with keys, we showered up and headed in to town in search of a late lunch with a view over the harbour. This meant navigating Hong Kong’s maze of malls, something Sam and Katie said they try to avoid because it’s so easy to get lost. Saturday evening involved more bars, more ex York University rugby players and a tour of the island’s main nightlife spots. It was apparently pretty quiet, due to the imminent storm but we still had an enjoyable and boozy evening.

We woke up Sunday morning to rain and wind battering the tower block and from the 26th floor we had a prime view of the surrounding buildings and the barrage they were receiving. It was addictive watching Typhoon Mangkhut out the window, though we did jump out of our skins when the wind snapped the window open. 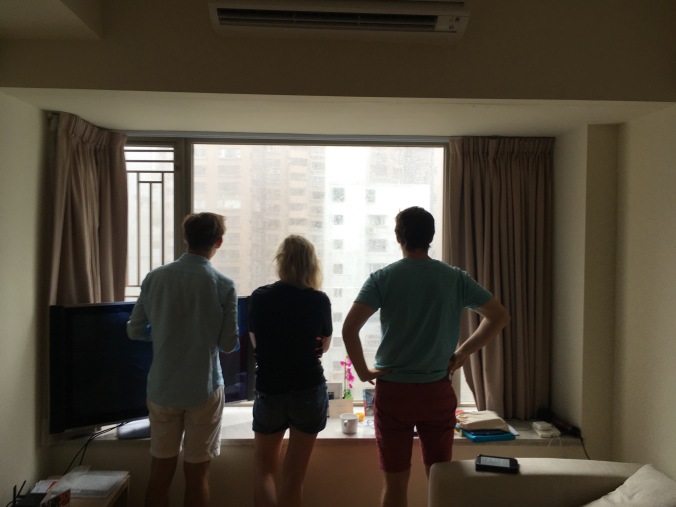 As entertaining as the typhoon watching was, we all got cabin fever by mid-afternoon and tried to get up to the highest level of the tower block to really experience the full brunt of the storm. The building staff had predicted that this may happen and had stopped the elevator from accessing the top floors. Back to pacing around the flat and, in Caro’s case, happily reading.

As the day drew on the typhon looked to be subsiding, although the weather warning had not been downgraded, and we had to get out. We could see people coming in and out of a restaurant below us so made bee line for it. The weather was still pretty hectic outside and debris was strewn everywhere. Trees were down, rubbish was scattered everywhere and it was definitely against advice to be heading out, but we had to and we were not the only ones, there were other Gweilo for whom the cabin fever had got too much or just really needed a Sunday pint. 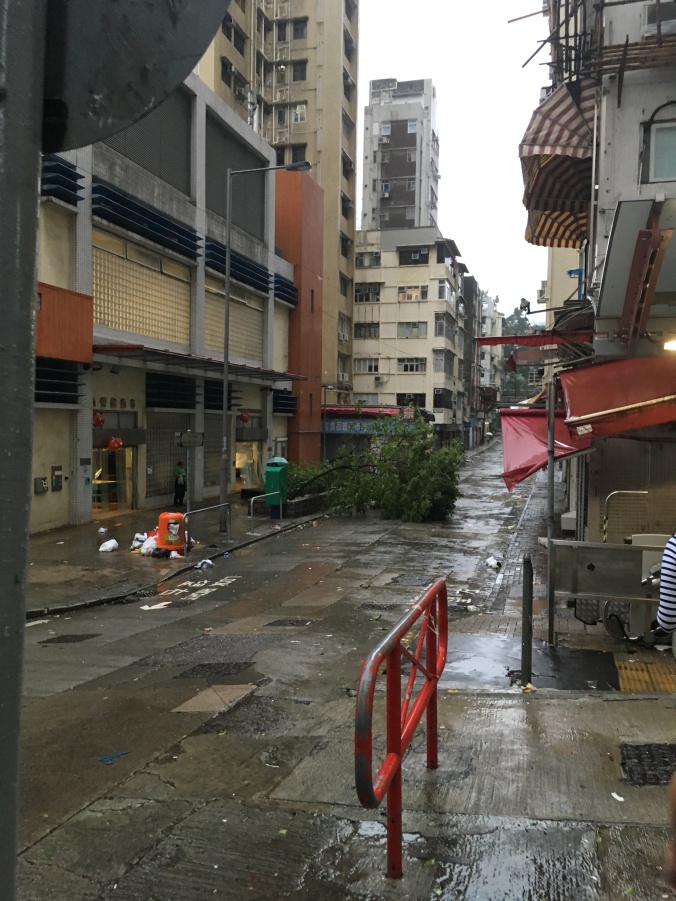 The next day was Monday and although the city was still recovering and tidying, Sam and Katie ventured in to work.  The transport system was not fully up and running so we decided we would not venture too far especially as the surrounding islands appeared to have fared much worse than the city centre. Instead, we opted to take in the destruction by hiking up the peak again. The city was scattered with furniture blown off balconies and significant amount of green debris from trees and plants.

On the Peak trail it was more like a scramble than a walk as we clambered among the fallen trees.  The birds were all completely disorientated and mainly just sat on the path as we walked past. Despite the fallen trees we made it to the top and looking out over the city you would of not have known the power of the storm which had blown through. 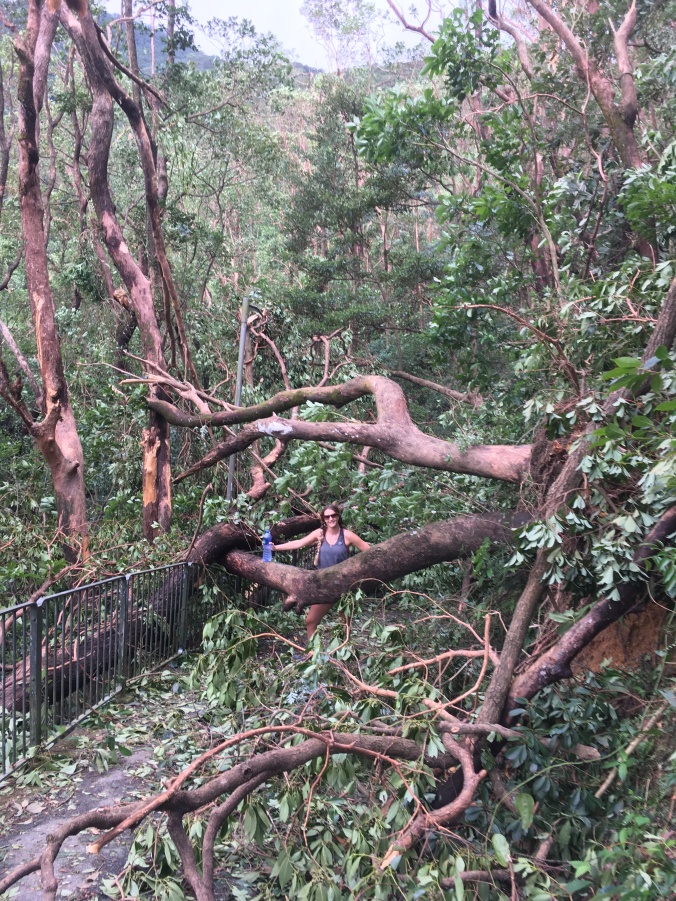 For our last evening Sam and Katie took us to Yum Cha, a place which Katie described as serving Instagramable food. 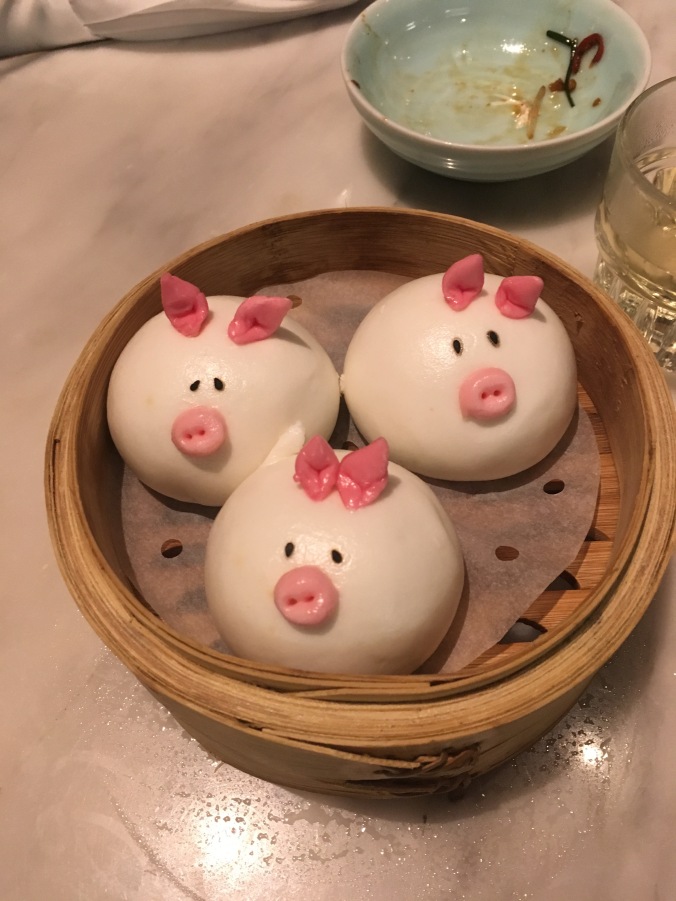 The food was tasty and pretty, but the star of the show had to be the hot custard buns that we had for dessert. 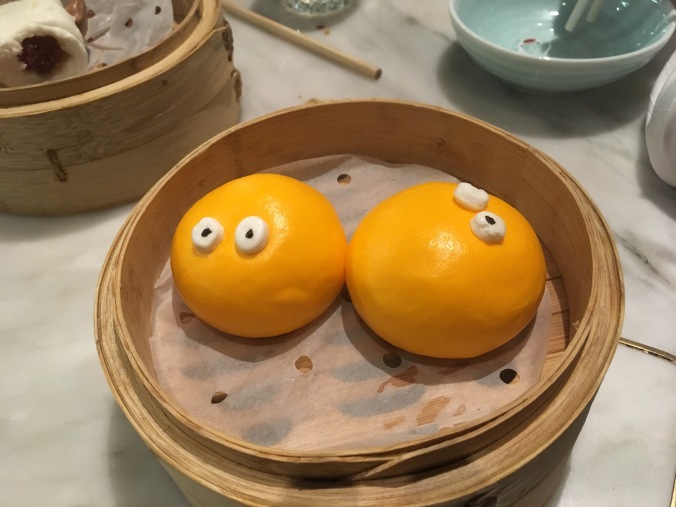 It brought to a close an awesome few days catching up with friends, living in a little luxury and being treated unbelievable well by Sam and Katie. Thank you. 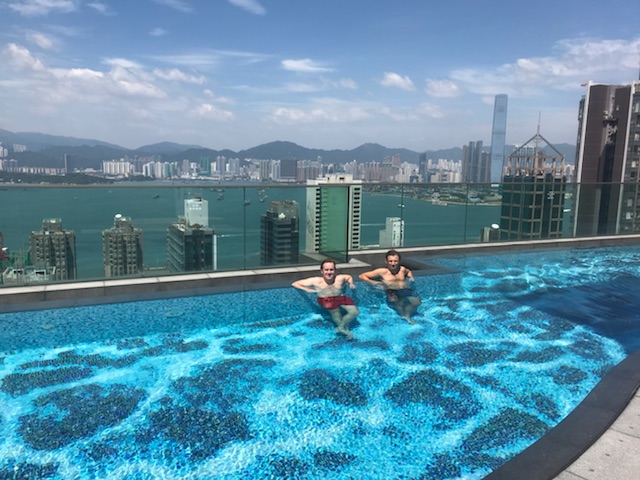 One thought on “Being treated like royalty in Hong Kong”