Komodo National Park is said to have some of the best diving in the world and the excellent snorkelling we did on our Komodo tour had convinced Caro that she had to do some. We had asked around and none of the companies that we asked had any issue with her Junior Open Water card, which was 18 years old because she had failed to replace it with a standard one, and they all offered snorkelling spots as well.  Unfortunately, James isn’t able to dive because of trouble with his ears, but at least now we can give a holistic view of the diving / snorkelling experience. We ended up choosing Divers Paradise Komodo based mainly on a recommendation from a dorm buddy, but we won’t go in to the details of finding a dive boat here, we will shortly be publishing a blog with some guidance on how to plan each part of your Flores trip and the dive boat stuff will be in there.

So, we will fast forward to the morning of our trip, we met at DPK at 6:45 for banana pancakes before making our way to the boat. The boat is set up with one area at the front for all of the dive gear and another to chill out on the horizontal at the back, many people spent most of the time lying on the beds between dives. 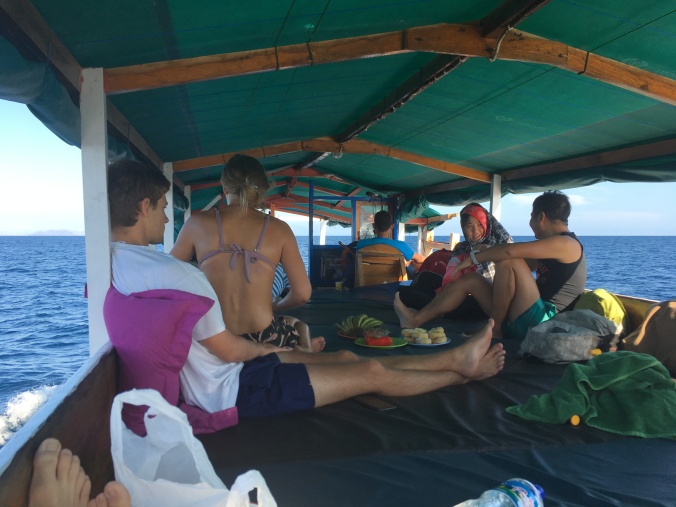 Caro, who loathes putting a wet wetsuit back on, kept hers on all day after the first dive and just hung out at the front of the boat.

Over the two days we went to the northern and central parts of the park; the south was off limits due to strong currents. Here’s a rundown of the dive (Caro) and snorkelling (James) sites, unless otherwise stated all sites are both diving and snorkelling sites.

Diving: Castle Rock was my first dive in Komodo so it was likely to impress anyway but it really was a beautiful dive. It’s slated as a slope but it’s a steep slope so it’s near enough a wall dive. I was lucky to be diving just with the dive guide so we were able to stay down for the full hour and have a really gentle dive. There wasn’t too much of a current and we spent most of the dive at 18m. The visibility was fantastic, it must have been 50 ft, and the site is pristine with abundant hard and soft coral and loads of small fish. I must have seen about 20 different species of butterfly fish alone. I will be the first to admit that it’s the big stuff that takes a site to the next level, and Castle Rock has it in spades. We’d been in the water all of 5 minutes before we spotted our first shark another four followed throughout the dive, one a nurse shark which was so wonderful to see. Trevali and giant sweetlips swam lazily around below us. Another of the big hitters are Napoleon Wrasse and we were lucky to see two fully grown and even one juvenile in relatively shallow water. They weren’t even remotely fussed by us so we were able to get a close look at the markings around their eyes. We also saw both hawksbill and green turtles. At the end of the dive we had air to spare so pottered around at 5m, just admiring the coral and fish and a blue spot ray that settled is a small patch of sand nearby. All in all, an absolutely fabulous dive.

Diving: I didn’t dive this site because I had enough experience to do Castle Rock instead, but this is where they will take newly quals with less than 10 dives, a girl from our hostel saw 2 manta rays here on her dive.

Snorkelling: We were dropped at one end of the bay and finned our way slowly round. The shallow water is home to some beautifully colourful coral and lots of equally colourful juvenile fish. We were lucky enough to see a moray eel poke its head out from within the coral.  The depth of the water meant the visibility of all the marine life was good. No big stuff but plenty to keep your attention.

Diving: Golden Passage is a drift dive site and the current decides which end of the passage you start at. This was my first proper drift dive and I was thrown by how strong the current was. In theory, you shouldn’t have to do a huge amount on a drift dive but because I had to stay behind my guide I spent a lot of time pushing back against the current to avoid colliding with him. I’m sure the difficulty was largely down to my lack of experience so I wouldn’t advise tackling this spot unless the current is a bit less punchy on that day or you have a couple of drift dives under your belt. So, I did miss out on the smaller details of the reef but we did see two good sized sharks and an eagle ray which was great. At one point the guide hooked on to a rock and had me grab hold of his BCD which gave me an opportunity to look at the reef a bit closer, but really, you are there for the bigger stuff.

Snorkelling: As with the diving you drift along the edges of the passage, it was certainly hard work to stay still to watch something in one spot. Here the variety of fish was greater and there were larger fish amongst the juveniles. We also saw 5 turtles which may have biased my view that this was our best stop of the day. Definitely wear a wetsuit for this stop, I didn’t and I was freezing.

Diving: This is a very gentle dive along the shore of an island. We didn’t see any big stuff but by diving at 12m we saw plenty of healthy coral and abundant fish. It was a nice easy dive to finish the first day off.

Snorkelling: We snorkelled along the top of the reef with the divers below. The coral was healthy and colourful with lots of smaller fish to keep your attention. There was no current so it was an easy stop to finish the day.

Diving: Batu Bolong is one of the top ten dive sites in the world, so I was silly excited to get in to the water. A small peak sticks up out of the water giving little hint of the glorious dive site below. As with most of the sites in the park, where you get in the water is determined entirely by currents and less experienced divers may find that the dive guide decides that the current is too strong for them, so be prepared for a change of plan. Hopefully that won’t happen though because the site is absolutely gorgeous, there are just so many fish. Because of the nature of the dive, you go forward and back across the reef at different depths in a relatively small area. This plus the popularity of the site means that you are going to encounter a lot of other divers. The guides are pretty good of steering the groups out of each other’s way and it is small price to pay for a really beautiful dive. Giant sweetlips, trevali, Napoleon wrasse and a couple of turtles all put in an appearance.

Snorkelling: This was the highlight of the 8 different snorkelling spots we visited during our time in Komodo National Park. The water was absolutely teeming with fish. You snorkel a distance of about 80m which is sheltered from the currents by the rock poking out of the water.  Some of the better coral was at either end of the strip and you need to be a confident swimmer for this site as the currents soon take hold. Definitely snorkel among the channels to see the more sheltered areas. Here it was the sheer volume of fish which made it stand out as our best stop.

We’ve included some photographs from the Go Pro here, we know that they aren’t great quality but we just wanted to give some idea of the vibrancy of the reef and the sheer numbers of fish. If at all possible, get yourself to Batu Balong. 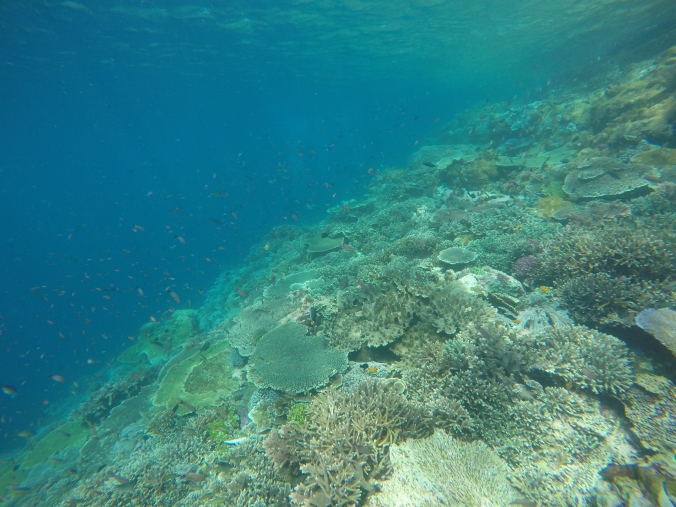 Diving: This would make a great spot for practicing drift dives because there is loads of space and you are unlikely to bash in to any coral. Makkasar is a wide channel mostly filled with broken coral, the occasional head of coral does battle with the current and these little pockets of life are lovely for four seconds until you pulled on. We didn’t see any mantas or sharks, which is pretty much all that you are there for, so it wasn’t a great dive for seeing things. It was definitely fun to sit lazily in the current is it propelled us along but without the big stuff it’s more a novelty than anything else.

Snorkelling: The current whips you along at a fair pace and unless you see mantas it is a pretty boring snorkel as the seabed is bare and made up of sand and broken coral. Unfortunately the only thing I spotted snorkelling was a plastic bag. If I had seen mantas it would have been a highlight. Just not our day unfortunately.

Diving: Depending on the direction of the current the dive either starts with excellent soft coral and finishes with excellent hard coral or vice versa. The dive site is about 20 metres offshore from the namesake island but gets deep surprisingly quickly.  It was the last site after two days of diving and I was feeling a bit jiggered. It would be a fairly gentle dive but unfortunately my BCD kept inflating (albeit very slowly) so I was constantly having to empty it and felt like I was swimming against current a lot of the time. It was a lovely dive though, the soft coral was simply astonishing, all in perfect health and more colours than I knew were possible.

Snorkelling: Here we saw the biggest school of fish from our 3 days in Komodo National Park. The current was gentle and did not disrupt the snorkelling. The fish life and coral were not great here compared to the other sites we visited, but would be considered pretty bloody good in most places. Unfortunately there was also so damage from dynamite fishing in some areas.

One thought on “Diving and Snorkelling in Komodo National Park”