When we first started planning Indonesia, about a month before we actually got there, we had planned to visit Java first and then Lombok and the Gili Island. About two weeks before we left Malaysia northern Lombok was shaken by a magnitude 7.0 earthquake causing widespread destruction and hundreds of fatalities. Indonesians in general have a remarkable capacity for recovering from natural disasters but Lombok continued to be shaken by aftershocks and we agreed that it was just not the right time to visit. Bali was already off the table because we haven’t had our rabies jabs (who knew that Bali had a rabies epidemic?!) so we ended up looking a bit off the beaten track. We had already planned to make a brief stop in Flores, to go to Komodo National Park, and we extended this to a full 10-day pan-Floresian adventure.

We arrived in Labuan Bajo airport and rattled our way to Ciao Hostel, which sits up on the hill away from the main town and has to have the most beautiful sunset view over the water. 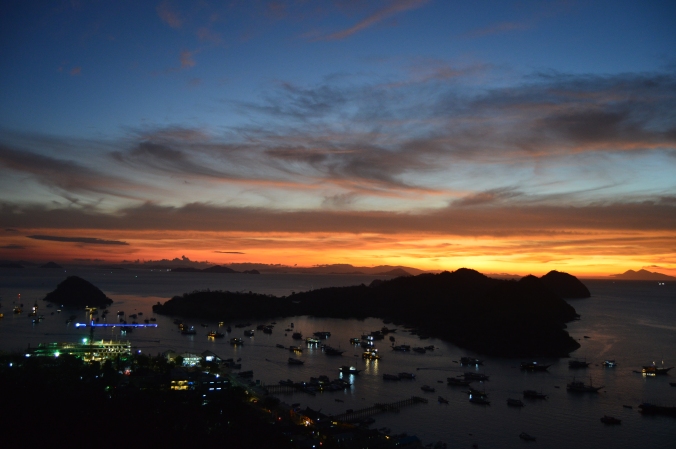 One of the team there also had an adorable puppy so the hostel got bonus points for that. 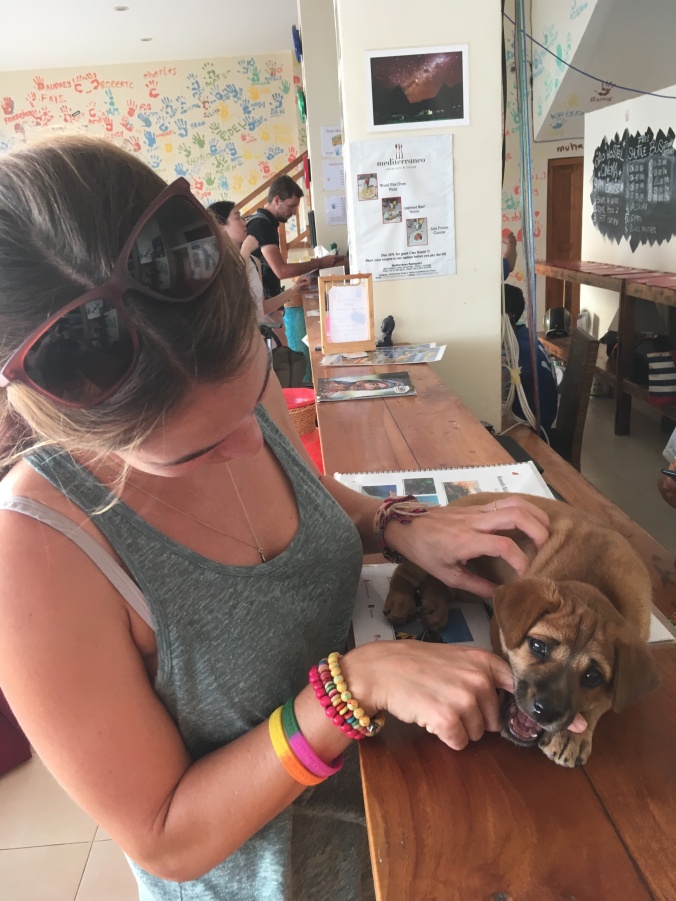 We got ourselves settled and caught the free shuttle down to town to start nosing around some dive shops and tour companies. We are going to write a separate blog about how we organised ourselves in Flores so we won’t go in to detail here save to say that you really don’t need to book in advance, you can easily find tours and an hour or so wandering up and down the main street should get you a good deal. Labuan Bajo is pretty much purely aimed at tourists and the main town itself holds little appeal, we actually ended up eating out our hostel a couple of times because there wasn’t anything enticing us down the hill. 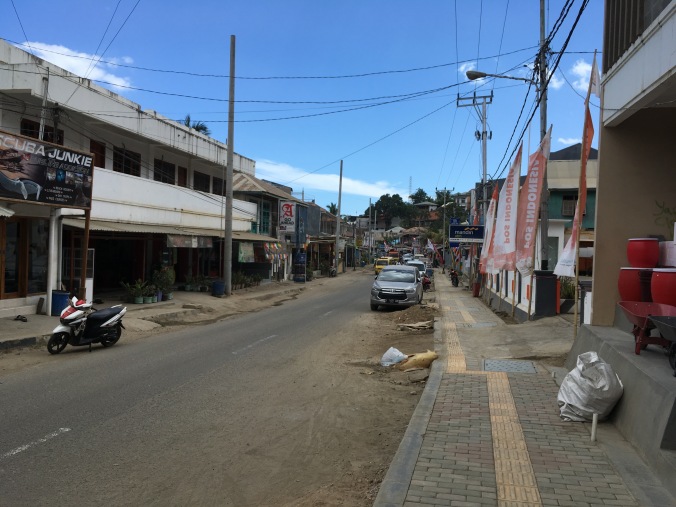 We were back in a dorm room again, and as far as dorm rooms go the ones at Ciao Hostel are spotlessly clean, and with only six beds we had a good bit of space. Sometimes it’s really nice to get back in to a dorm and meet some people, we met a couple of English girls and an American who had settled in Perth and we had a good laugh with them over the next two days.

The first morning, we were given two reminders that we were firmly in backpacker territory; one was funny, one was definitely not. We arrived downstairs at about 6:45am, ready for our transfer to the jetty and our trip out to Komodo Island; one chap clearly hadn’t made it as far as bed the night before and was sound asleep on a beanbag in reception. One of the hostel cats decided that his lap made an ideal place to settle down for a clean. Cat Man remained asleep throughout. This just doesn’t happen in hotels. 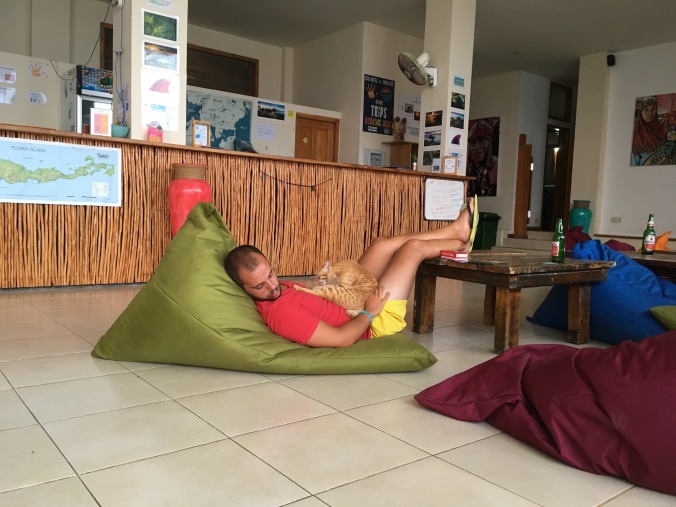 The second reminder was less amusing. During the night Caro had been absolutely devoured by fitey buckers. As she has a tendency to get eaten all the time we hoped and prayed that it would be mosquitos, but when the bites got progressively worse we were forced to concede that they were definitely bed bug bites. This led to the dismantling of the bed, washing absolutely everything we owned and Caro consuming large doses of antihistamines to stop her from losing her mind with the itchiness. Living the dream does come with its price. 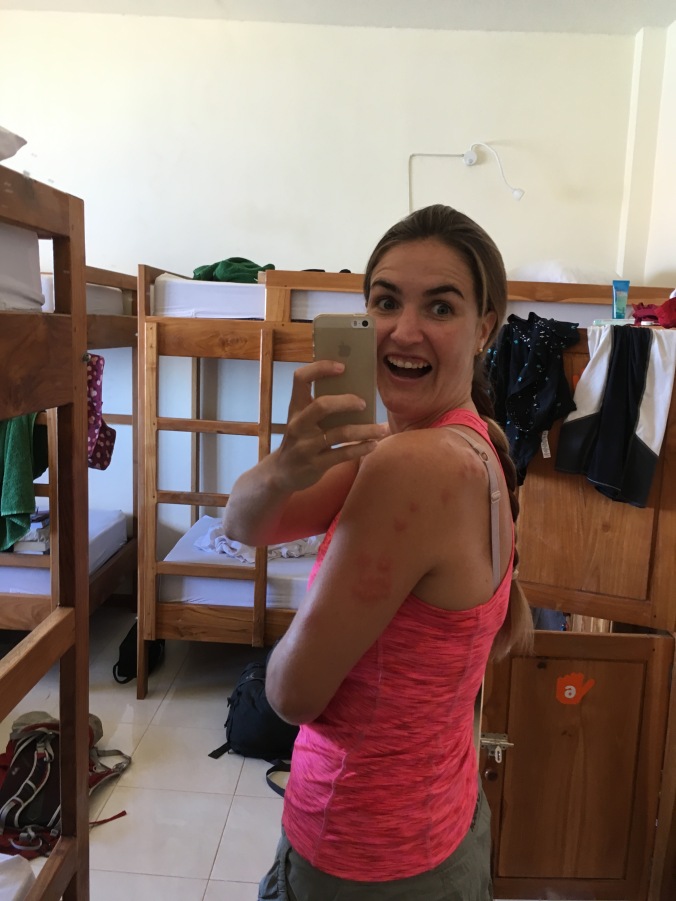 People have a tendency to blame the hostels in this situation, which is generally unfair as the bed bugs had to come in some way, usually in the backpack of another traveller. Lots of people come to Labuan Bajo via a four day liveaboard boat from Lombok which are infamous for creepy crawlies; some hostels don’t actually allow people who are fresh off the boats to stay because of the pests that they bring with them. The staff at Ciao reacted very quickly and, bar one moment where they tried to get us to pay for the mountain of laundry the bed bugs had necessitated (including our backpacks), handled the situation well. Incidentally, the laundry situation was rectified very quickly once we started talking about bed bugs loudly in reception and showing off Caro’s welts.

Anyway, we weren’t in Labuan Bajo purely to harbour parasites, we were there to see dragons. We had our first true dose of Indonesian time-keeping as we sat on the steps of the hostel for forty-five minutes waiting for our transfer. We then spent another hour sitting on the pier waiting for the office to open to issue the captain with some papers. Never once was it made clear why we had to get out of bed 2 hours before the office opened, it was a touch frustrating. Fortunately, the view from the pier was very pretty. 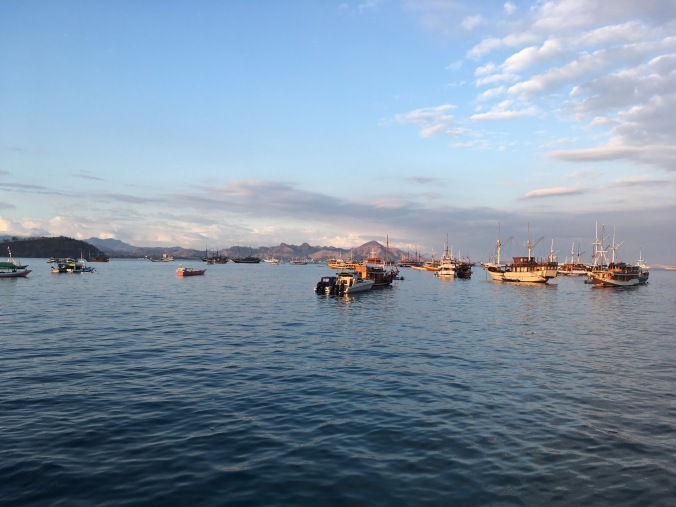 We finally made it out of the harbour at about 8:30 and were speeding over the water towards Komodo National Park.  Our first stop was Padar Island. Here you can make the incredibly sweaty ascent to the top of one of the hills to where the iconic photos of Komodo National Park are taken. It is absolutely beautiful. 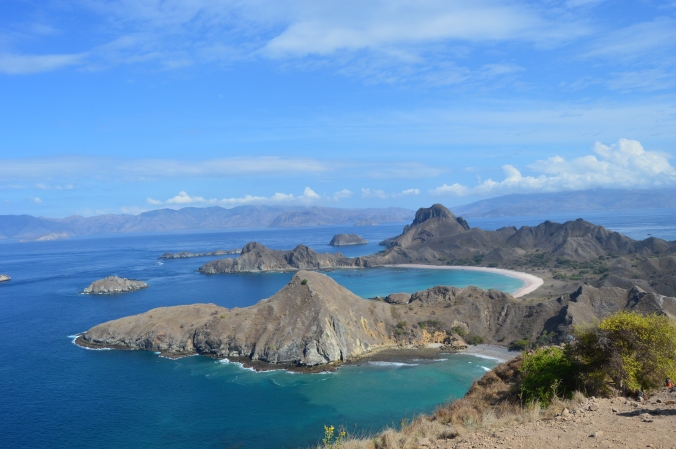 There is also zero shade and even under a morning sun it is baking hot. As ever, we were astounded by the people who had clambered up in floor length dresses toting full blown camera gear in order to get the perfect photographs. There are a fair few people up there and unless you are willing to strike out on your own up one of the other hills you aren’t going to get much peace. It’s a good stop but we would have liked to be in and out as quickly as possible and ended up hanging around for well over an hour.

It was finally time to clap our eyes on some dragons and we zipped over to Komodo Island to meet the namesake reptiles. Despite being a pretty major tourist attraction, organisation on Komodo is no better than any of our other experiences that day and we all huddled next to a small dilapidated information centre whilst a chap off the boat tried to round a guide up for us. 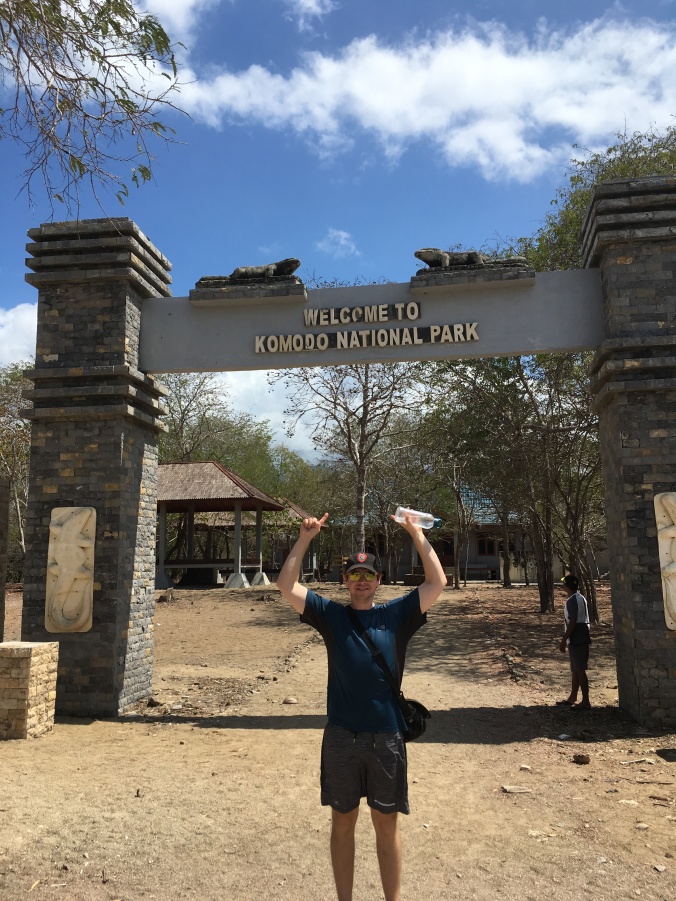 Finally, a man with a stick approached us and we set off on the medium length of the three walks offered. As we rounded the back of the camp the guide spotted a baby Komodo Dragon ferreting around in a pile of rubbish. We tried to approach it but it skittered away and off up a tree. We had seen a dragon (albeit one eating rubbish), mission accomplished, our trip was not in vain. We also learned that komodo dragons will live in hollows at the tops of trees until they are about 2 years old. This is because bigger dragons like to eat them, their mothers included. As if they weren’t gross enough already.

We continued on our walk, with the guide giving us some fun facts about dragons and pointing out different plants and flowers to us. When we reached the junction that split the medium walk from the short one we were given the option to go on the short walk, where they knew there were a couple of dragons, or continue on the medium walk, where there might be, but probably not. Whilst everyone else in the group dithered, Caro immediately said that she wanted to go on the short walk, it was really very hot. Eventually everyone agreed that this made sense and we walked another hundred metres before emerging in a shady spot by a puddle of water where two large Komodo dragons lay so still that they looked stuffed. 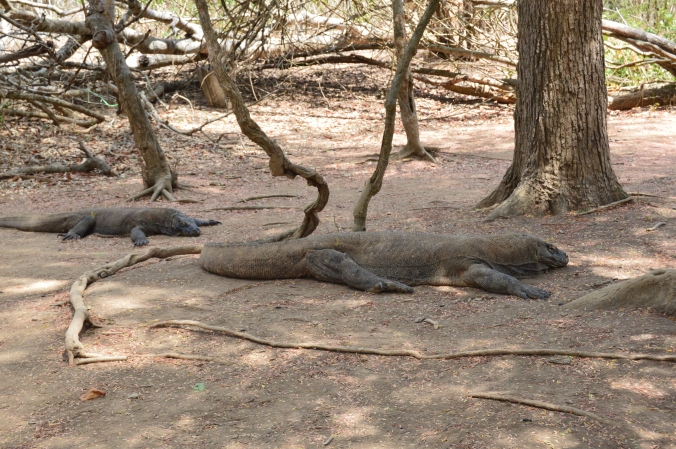 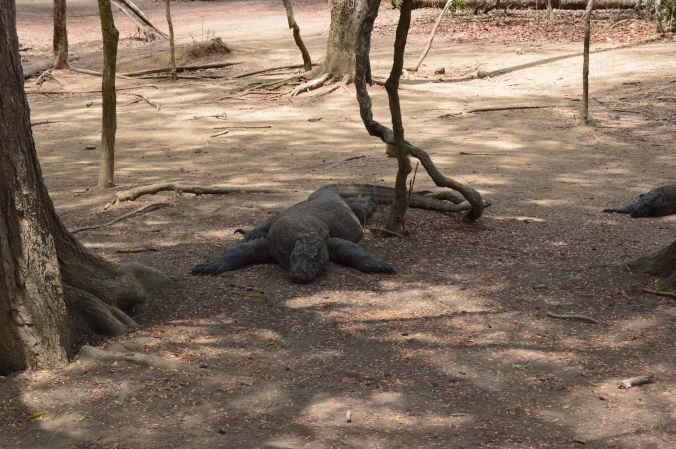 We had read a review where someone had said she thought that they were drugging the dragons, and whilst we don’t think this is the case we couldn’t argue with the fact that they did not move at all. Having been given all the warnings about how dangerous they are and the spiel about how the dragons are wild animals and should be treated as such, we were really surprised when the guide had people crouch behind the largest one for photographs. Both guide and visitors couldn’t have been more than a metre away. One by one the groups of people filed behind the dragon for their “awesome” photograph. 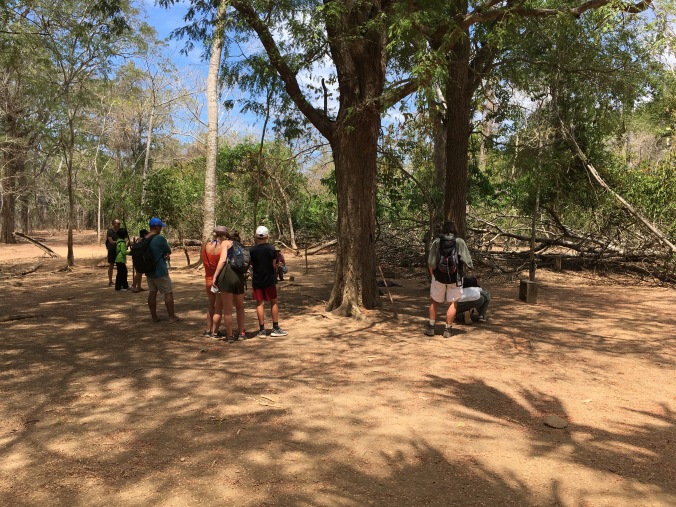 If you haven’t been able to tell from the tone, we were very unimpressed, we point blank refused to pose for a photo and hung well back. We couldn’t wait to leave. Sadly, our experience on Komodo Island typified so many of the things that we hate about the impact of tourism on wildlife and as a result we would not recommend it to anyone. But we have seen a Komodo Dragon, and they are as much like a creepy large lizard as you imagine.

Fortunately, we had a couple more stops on our trip and these were much more rewarding for the most part. Pink Beach, so named because the sand is pink, had some really beautiful snorkelling to offer just offshore. The only problem there is that there is a mean current just beyond the headland so if you stray out of the little bay you have a bit of a battle on your hands. We were ok but anyone who isn’t a confident and strong swimmer will have issues. It was a great snorkelling spot and the coral was in surprisingly good nick considering how often people visit here. 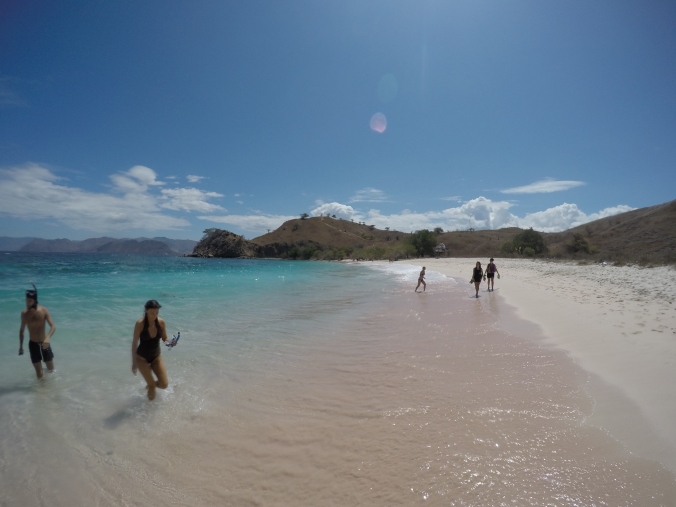 Our next stop was Taka Makassar. This is literally a strip of sand in the middle of the ocean and it looks like everyone’s idea of a desert island. The water is perfectly clear and a spectacular turquoise colour, the sand is fine and golden. There isn’t much snorkelling to be done, although James gave it a go. Caro went to sleep. 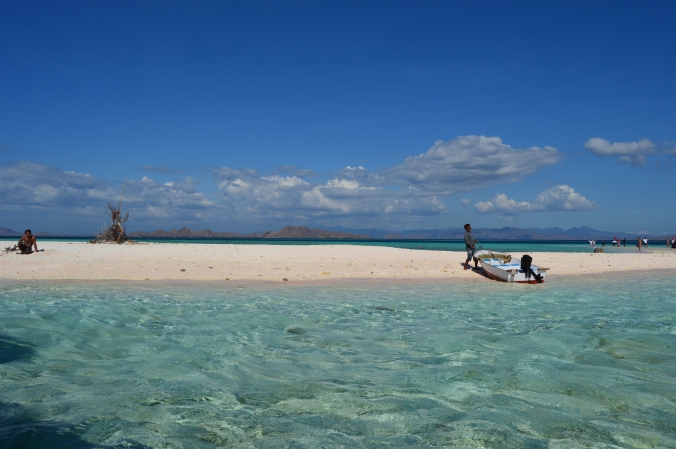 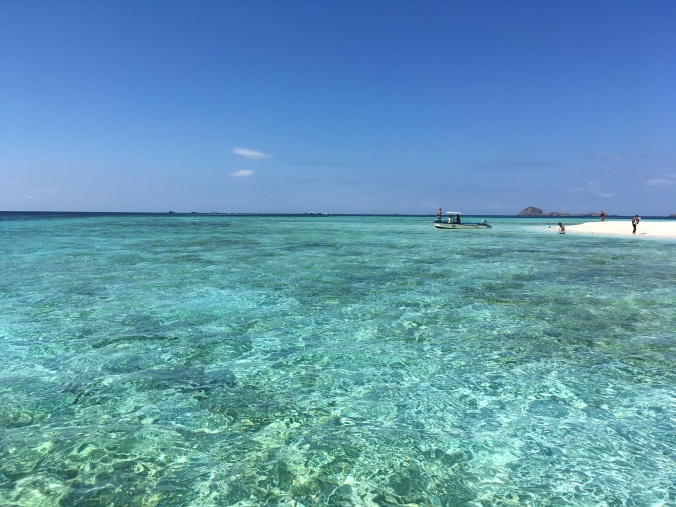 We joined a few other boats driving in circles at Manta Point, but there were no manta rays around so we sat on the edge of the boat in our snorkelling gear for a bit and then climbed back inside and set off for our final stop. 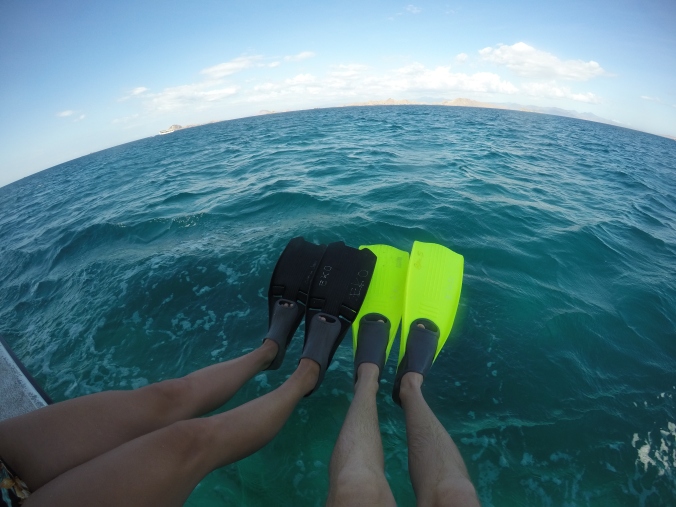 Kanawa Island was probably our favourite stop of the day. There is a small resort there so there are sun loungers on the beach for a cost but you can just flop down on the sand for free. The snorkelling was also excellent, whilst pottering around in the shallows we saw a fair-sized shark that Caro proceeded to motor after until it came to a stop under a bit of coral and let us get a good look at it. 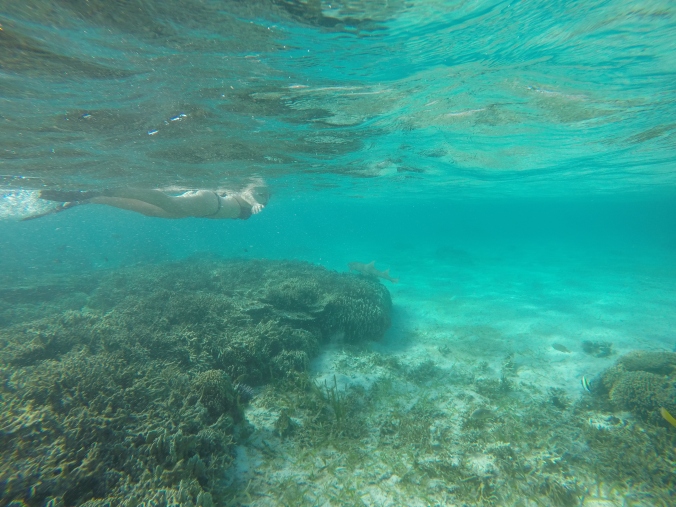 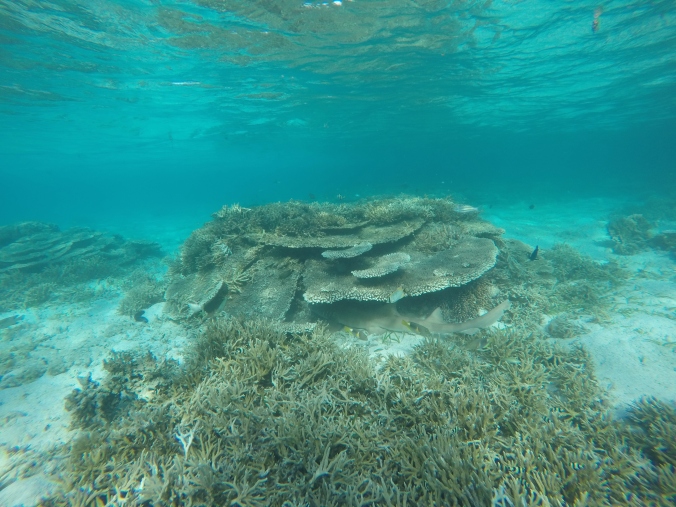 At the far end of the beach the water got a bit deeper, probably about 12 ft, and a simply gorgeous coral garden was flourishing there in brightest colours with gazillions of fish swirling all around. As we were swimming to the sure we spotted a sea snake writhing around on the sand, the first one that we had seen whilst in the water. James was not a fan. 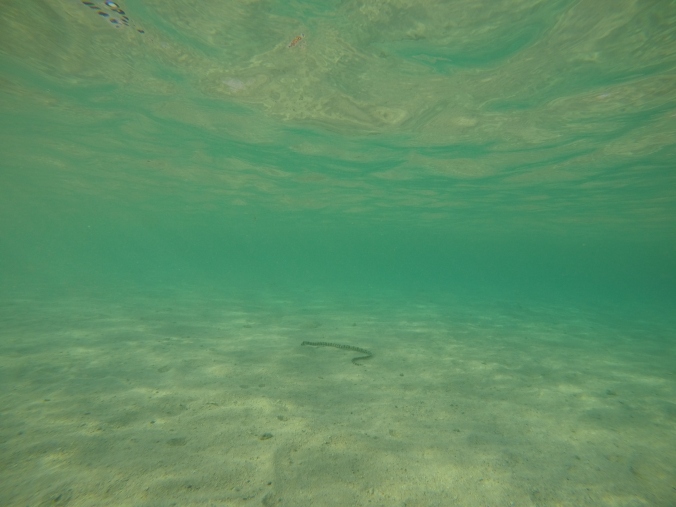 We haven’t really learned how to use our GoPro (you may have noticed), so we didn’t manage to capture it but it was a fantastic snorkel and a beer on the beach afterwards just capped the whole thing off.

We have this thing that we do from time to time; we figure out what day of the week it is (harder than you would imagine) and what time it is back in the UK. Then we think about what we would be doing at that time back in the real world, usually commuting on the London Underground, and have to pinch ourselves to make sure that we really did it, we’re really here. This was one of those times. 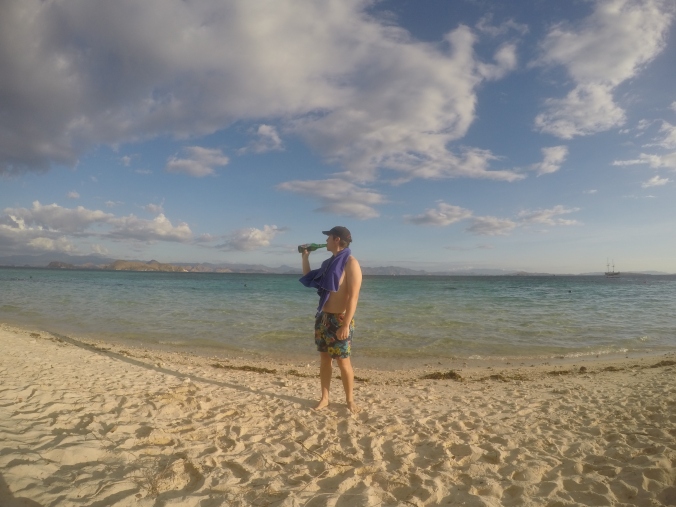