We’d had such a great time at Sepilok and were keen to see some more Orangutans so, on our third day in Kuching, we set off for Semenggoh Nature Reserve, which is about half an hour outside of town. There is a bus that you can catch from the waterfront but we are slightly embarrassed to admit that we are no longer the budget travellers that we had set out to be originally; taxis are immediate and comfortable and so cheap that we have spent relatively little time sitting waiting on the sides of roads or sitting on local buses since recommencing our travels in Asia.

Our Grab driver deposited us at the entrance and we had already waved him off and achieved tickets before we twigged that the feeding area is a 15-minute uphill walk from the gate. Our top tip for the day is ask the driver to wait whilst you buy your tickets and then have them whizz you up to the car park near the feeding area. In our case, we probably needed the exercise and we still arrived about 10 minutes before the feeding so no harm done.

Semenggoh is set up quite differently to Sepilok. Rather than wooden walkways in to the jungle there is a tarmac road that runs right through the middle of the forest and the feeding area is off to one side of this. To us, this did make it feel a bit more zoo-like than Sepilok. There were plenty of people crowded in to the feeding area but we were able to find ourselves a spot on the rope, a little away from the main area. One large male quickly made appearance, but he sat on the road on the far side of the feeding area from us and we couldn’t really see him over the heads of the crowd. 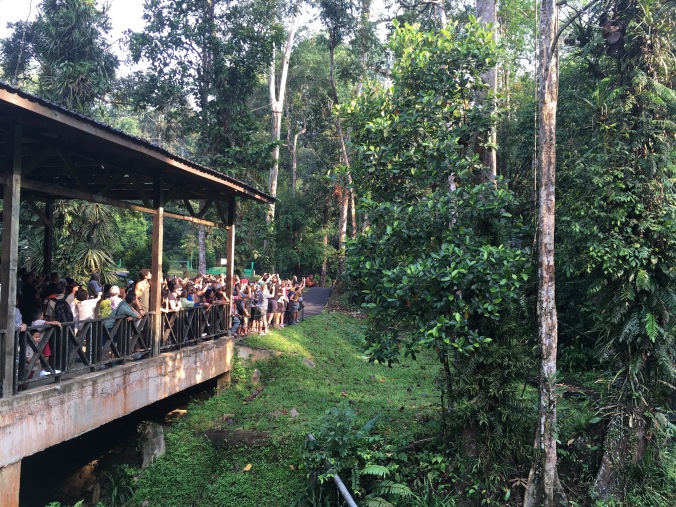 By standing our ground we had a good spot to watch a mother a baby capering in the trees above us and there were plenty of other orangutans around to watch as well. 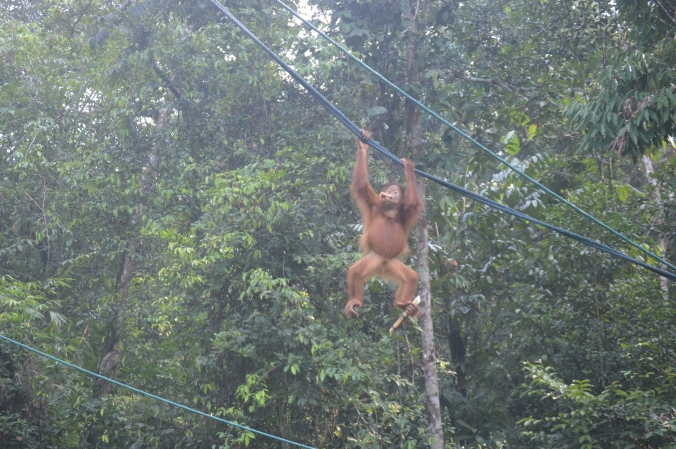 Because of the proximity of the feeding area to the viewing areas, Semengoh is arguably better than Sepilok for getting close to the apes. This isn’t necessarily a good thing but it does mean that you can get good photos.

One thing that was noticeably different at Semenggoh was the noise; people were talking loudly and children were shouting and the keepers, in our opinion did not do enough to control the crowd. At one point a young orangutan approached down the road from the direction of the carpark, coming up behind the crowd. People immediately spun round and surged forward surrounding the poor thing, giving it only a couple of metres of space and essentially trapping it. It stopped dead and eyed the crowd warily and it took the keepers several minutes of cajoling to get people to move far enough away and give the orangutan an escape path back to the jungle.

Another enormous male made an appearance, barging his way through the tress to the middle of the feeding area. The other orangutans beat a hasty retreat to the treetops whilst he hunkered down and proceeded to bash open a coconut for breakfast. He really was quite spectacular to watch. 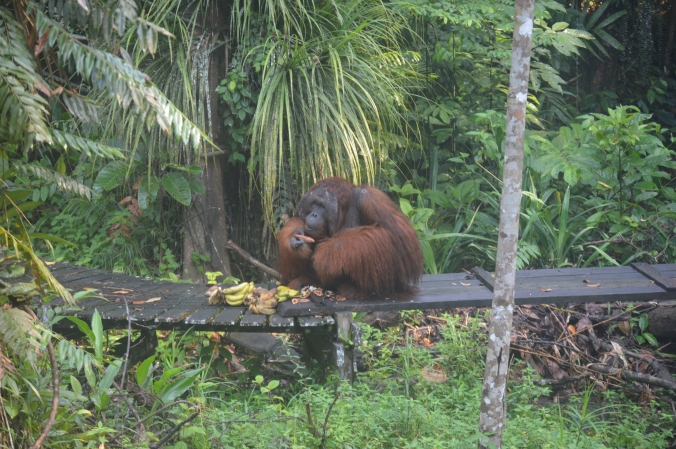 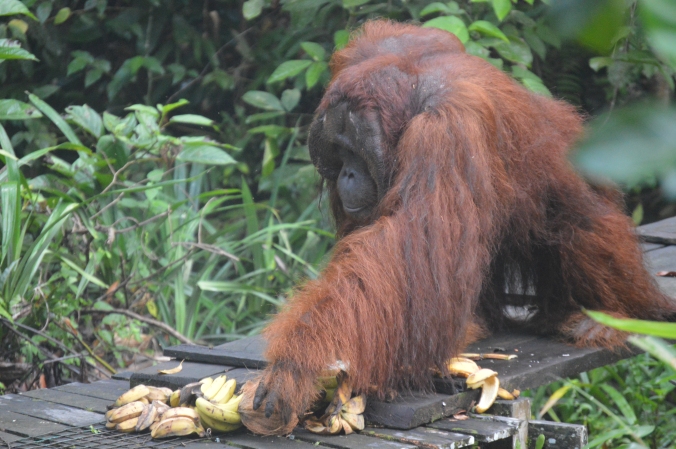 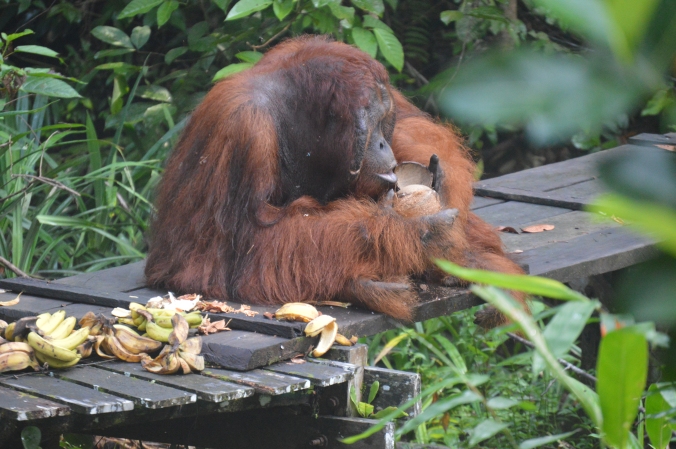 The keepers were startled out of their lethargy when this chap decided that he wanted to cross the road, right through the middle of the crowd. They flapped madly to usher people away from the feeding area. Despite the warnings there were still the usual idiots trying to get closer to a full-grown wild animal. We thought that contained viewing areas would make a dramatic difference, particularly for the orangutans, but we felt that at Semenggoh the priority was tilted more towards the human visitors than the resident animals. People started to leave after about 45 minutes and, as we had at Sepilok, we tried to stay behind and get a better viewing in the quiet. Unfortunately, this was the time that the keepers decided to do their jobs and we were ushered away with everyone else. On the plus side, the small visitor centre had WiFi so we were able to book a Grab for the return journey to town without having to walk back down to the main gates.

It was fantastic to see the orangutans again and Semenggoh is more convenient and far cheaper than Sepilok and the reserve is doing its bit to protect these beautiful animals. It was also incredible to see two enormous males up close. That said, for our money, we would choose Sepilok every time. 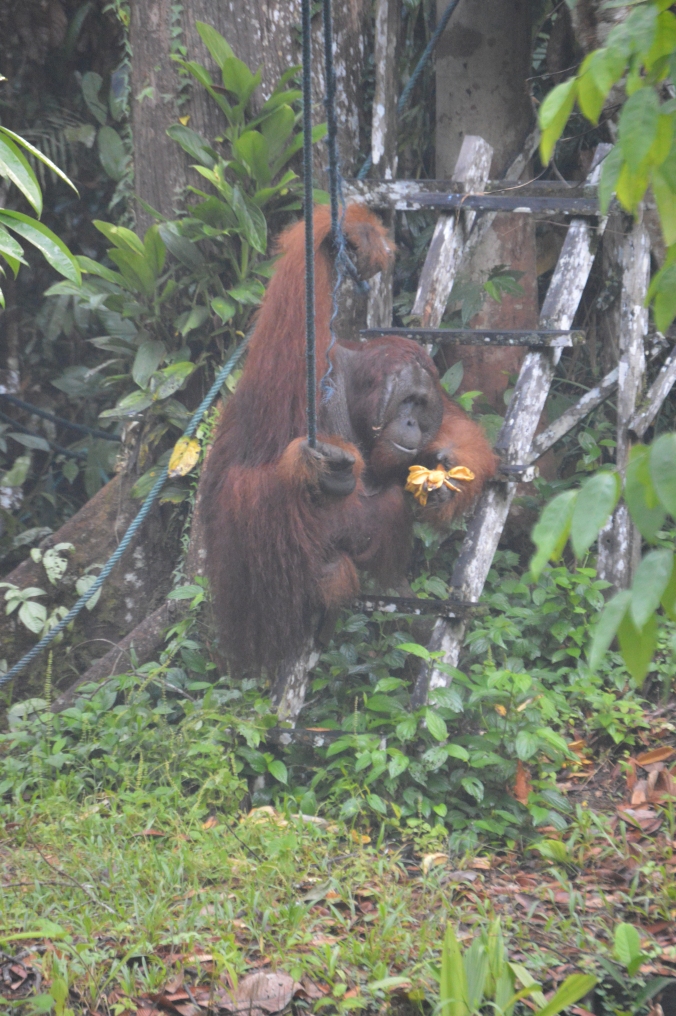