Luckily our journey back to the mainland from Perhentian Besar was a little calmer and we arrived back in Kuala Besut only mildly shaken up. With a couple of hours to kill before our bus from Jerteh to Kuala Terengganu we tried to get some food but the restaurants were all hectic so we admitted defeat and jumped in a Grab to Jerteh, about 20 minutes away. Which is how we found ourselves with a couple of hours to spare in Jerteh bus station, hardly the most glamorous place in the world and decidedly lacking in decent snack food. We ended up boarding the bus without biscuits or diet coke, Caro’s bus journey staples so it was a coin toss as to whether she turned in to the grumpy chicken. On the plus side, it was a double decker bus and this made us happy, because we are infants and enjoy simple pleasures like tall vehicles. The journey was a quick, easy and comfortable one. We clambered out at Kuala Terengganu bus station and walked the 500 metres or so to our hotel, Suite 18, on the edge of the small but lovely Chinatown.

When we checked in we felt that this hotel was a bit too nice and much too cool for us; it was spotlessly clean, the beds were incredibly comfortable and the whole place was decorated with motivational signs and artfully placed push bikes and the like. We proceeded to destroy our neat room by spreading our stuff around as much as possible, changed and went out for dinner. Golden Dragon restaurant in China Town has rave reviews and we joined the significant crowd of other people who got there, realised it was shut and sat down at the restaurant next door instead. Which was ok.

We had one full day in KT, a fairly long list of stuff to see and only a few hours before the heat of the day became completely unmanageable. With this in mind, we made short work of our mugs of Quaker Oats and set out early to explore the town. As usual we made a beeline for the main market on the waterfront, it smelled pretty dreadful so we beat a hasty retreat after a quick tour. It was the meat and fish that made it smell but they also seem to have an abundance of durian in Terengganu, all of which they are attempting to shift at the waterfront market.  Immediately opposite the central market is a large, once attractive, now derelict complex.

We nicknamed it the bizarre bazaar: the dry fountains, motionless escalators and abandoned shops gave the eerie impression of a post-apocalyptic movie. 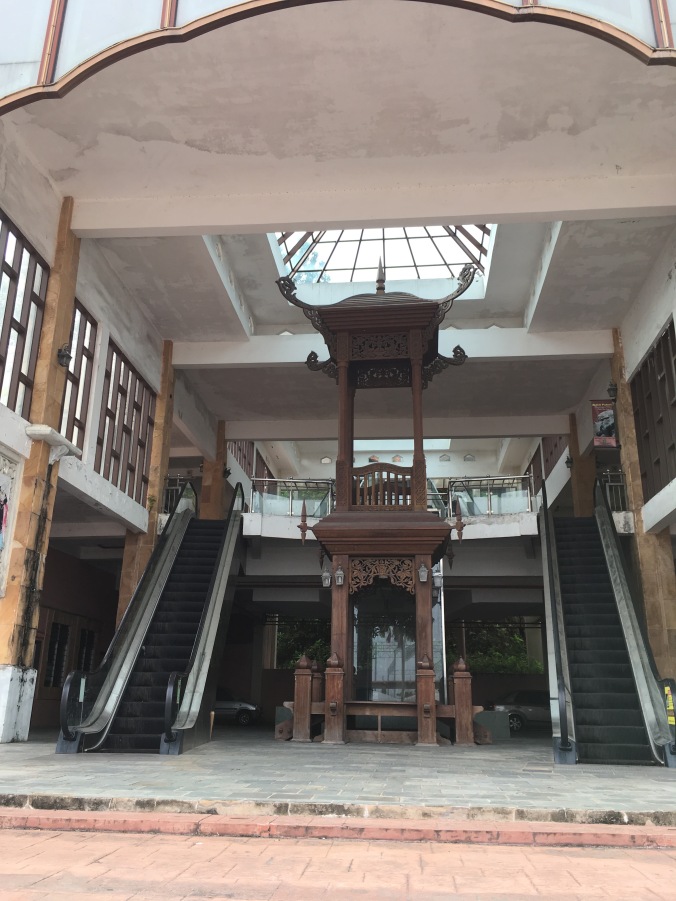 We decided to visit the visitor centre to get some information on KT’s heritage buildings but were met with a sign that said the building was closed for refurbishment, judging by the state of the place we could only assume that this had been the case for several decades. Once again we found ourselves in a position where we just had to wing it, not necessarily our strong suit but we certainly give it our best efforts. We were trying to get to the fort on top of Bukit Puteri but the only access that we could find was a staircase that came to an abrupt halt, hanging 5 metres off the ground.

We finally figured out that the access was in fact through the bizarre bazaar by way of a stationary escalator, obviously. We trudged up the escalator and past two entrance booths, one of which was unmanned and the other which may as well have been for the level of interest the man showed in us. So we just showed ourselves around, trying not to wake the sleeping construction workers taking an extended break on what we deciphered had once been a throne. 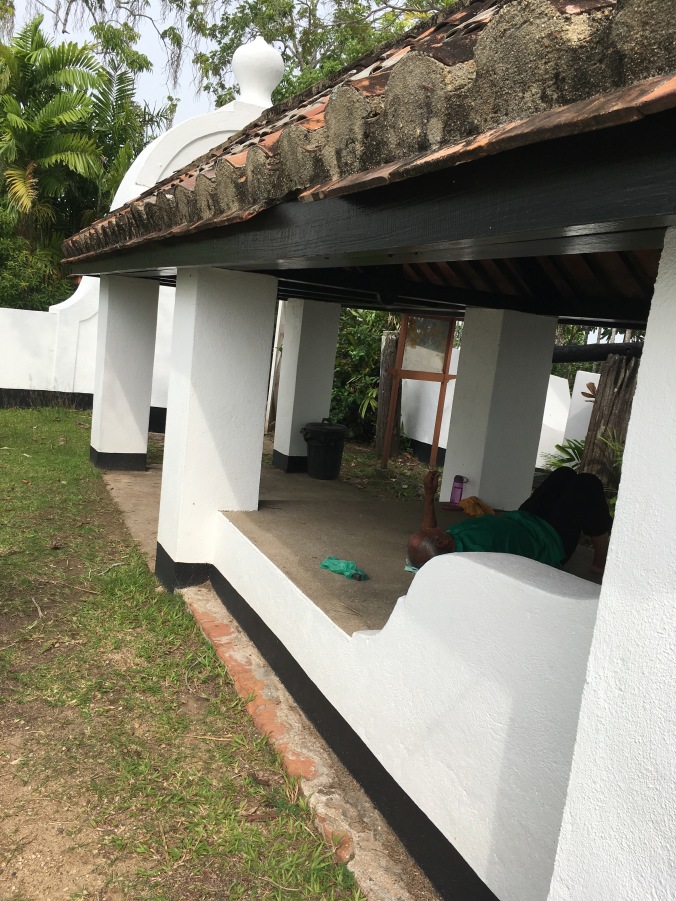 There were a few mildly interesting bits to see, and you got a view over the river, the surrounding town and the state palace but we are certainly glad we didn’t have to pay to look around.

We wandered back towards Chinatown, or Kampung Cina, which really is the city’s highlight. It consists of not much more than one street and some side streets, but what a cracker of a street it is, lined with little places to eat, some excellent street art and colourful traditional shop houses which sell a vast array of stuff and where the shop owners seem more interested in an extended midday snooze than doing any business. It also has a couple of temples thrown in for good measure. 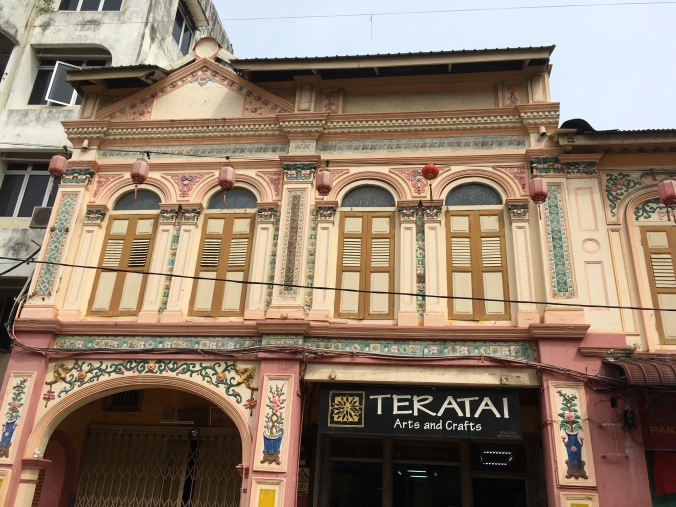 The highly rated Madam Bee’s was just a stone’s throw from our guesthouse so we stopped in for lunch and tried the Laksa Terengganu, which did not disappoint. You may well have the place to yourself but don’t be put off by this, it is a great option for a cheap and tasty lunch. 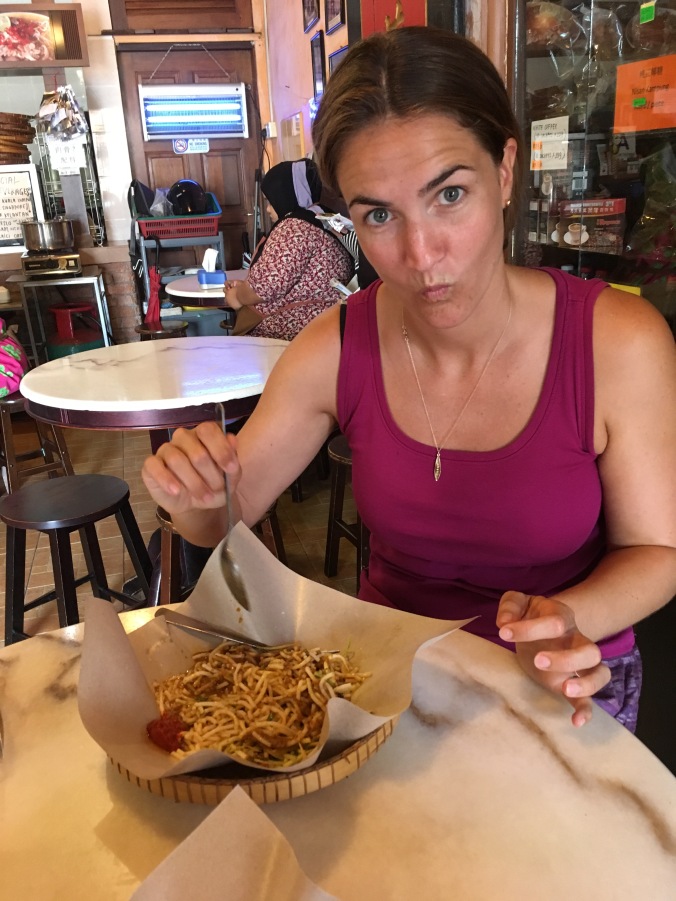 After lunch we took in the town’s slightly alternative pieces of street art where whole lanes have been transformed. Turtle Alley was designed to be both decorative and educational, with the aim of discouraging the practice of harvesting, selling and eating turtle eggs. It’s a very sweet piece of art and, being big kids, we enjoyed looking for the hidden turtles in each of the murals.

Other lanes include Seven Wonders Alley, which depicts the wonders of the modern world and Payang Memory Lane, which pays tribute to Chinese community leaders. We finished up by strolling along the waterfront which has a decidedly half-finished feel to it but it’s worth taking 10 minutes to enjoy the final bits of street art. 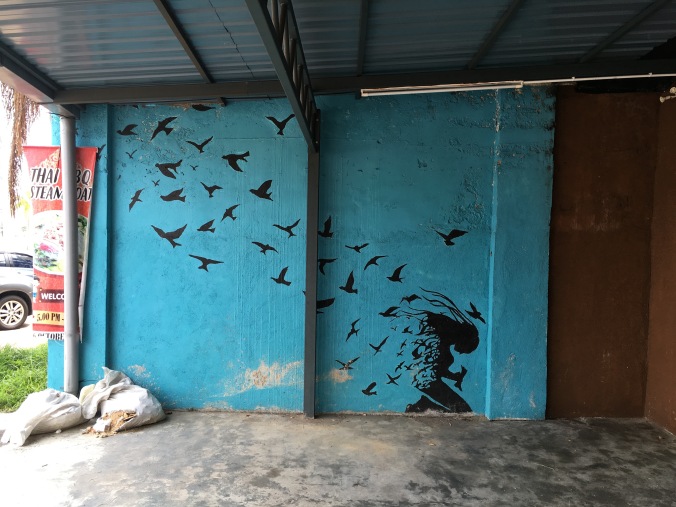 It was roasting by one o’clock and we had ticked most things off our list when we escaped back in to the air-conditioning. Within 30 minutes the heavens opened and it threw it down for the next 2 hours. Later in the day, once it had cooled down, we took advantage of a break in the rain to see the Crystal Mosque. It’s a way out of the city itself, next to Taman Tamadun Islam, the world’s first Islamic theme park, so we jumped in a Grab to get there and asked the driver to wait whilst we took some pictures. Please note: you do not need to pay to get in to the theme park to visit the mosque, you just drive / walk around the outside until you reach the mosque itself. Personally, we thought that the mosque was pretty underwhelming after being pitched as one of the most beautiful in the world. 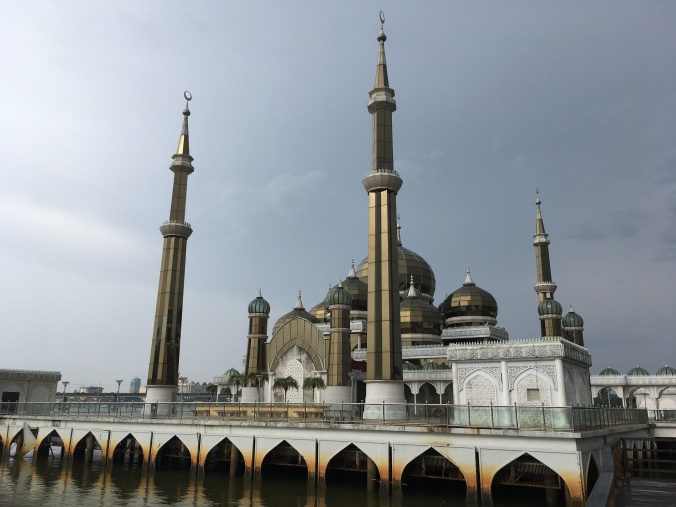 That being said, the interesting art deco design did grow on us; the level of detail was more impressive the more we looked at it and the building itself is rather striking when the sun hits it. Overall though, we didn’t think it was worth the cost of the taxi journey there and back. (When we were writing this we conceded that it does look pretty cool in the pictures but it really didn’t seem that great at the time!) 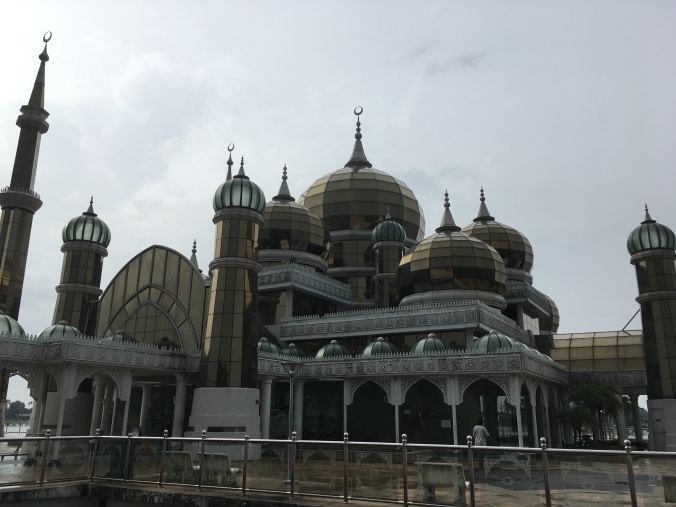 We think that you are allowed to go in and look around outside of prayer time and if appropriately dressed but, surprise surprise, renovation work was ongoing when we were there so it was closed to everyone.

That evening we managed to squeeze ourselves in to Golden Dragon restaurant which is easily the most popular in Chinatown. The food was good, we aren’t sure that it quite lived up to all of the hype but its worth a visit if you are there.

So, KT turned out to be another place where you don’t need to go out of your way to visit but it’s nice for a day particularly if you like slightly odd places and street art. We’re glad that we have seen it and would keep it on the itinerary if we were to do our trip over again. The next day we drew the first part of our Malaysian adventure to a close with an early flight to Singapore. 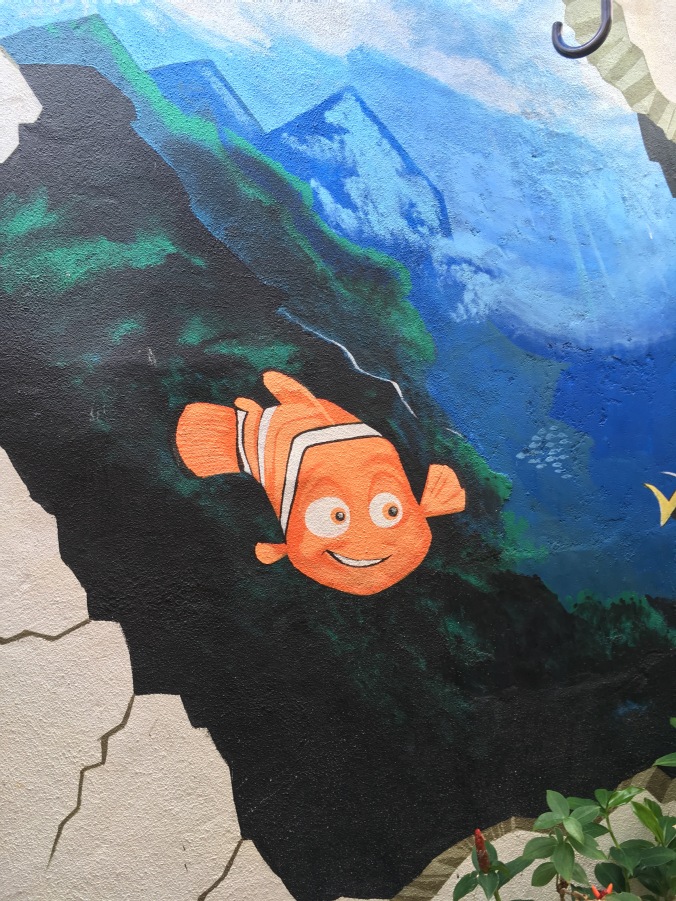