We landed pretty late in Kota Bharu so all we wanted to do was get to our guesthouse and sleep. The streets were completely deserted, Kota Bharu was clearly not a party town despite our driver’s assurances that locals, himself included, like to have dinner at midnight or later. Our guesthouse was…interesting. On the plus side, it was extremely cheap and our air-conditioner rendered the room artic-like within minutes. Unfortunately, the sleep we craved did not materialise as the bed had the most worn out mattress we have ever had the displeasure of sleeping on and the pillows were sofa cushions. The sensation from the mattress springs was that of lying in a very firm, metal hammock without the benefit of being slung between two trees on a beach. The room did have the unique selling point of not having a window but still having a view.

Most people only stay in Kota Bharu overnight on their way to the Perhentian Islands or Thailand but we had decided to take a day to explore the town.  Our first stop was the central market where anything and everything is sold: fresh produce on the ground floor, non-perishable foods on the first floor and clothes on the second. For non-perishable foods read endless quantities of dried fish products.

We are fairly certain that the riot of colour that is the food market currently features on the front on the Lonely Planet, venture up to the higher floors for the best views of it. 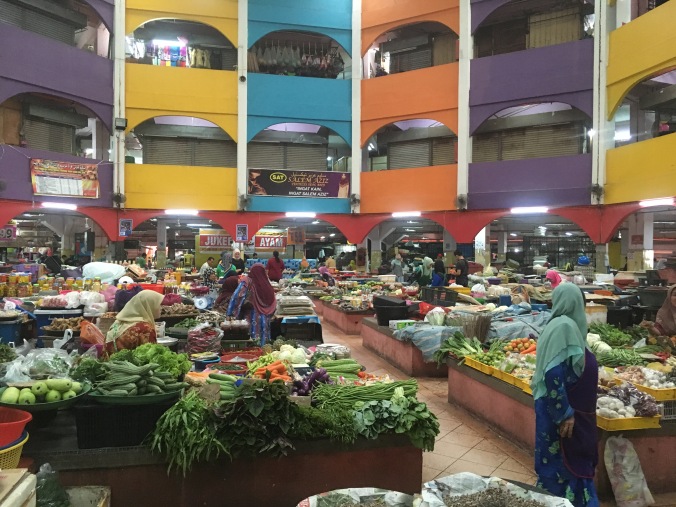 The array of exotic fruit and veg was impressive, we couldn’t name a good chunk of it so resorted to taking pictures so that we could google them later.

After wandering among the stalls and taking in the atmosphere we made our way down to the edge of the river, Sungai Kelantan. The more romantically inclined would describe it as chocolate coloured but we’re just going to go ahead and say that it’s brown and not particularly appealing.

There are a number of museums in Kota Bharu, all of which are located within close proximity to each other around the padang. Unfortunately, the War museum was closed for renovations, something which was becoming a running theme for us, so we started with the Astana Jahar. It is housed within an attractive 19th century wooden house and exhibits provide information on the historic lives and Kelantanese rituals of the upper class and royals in Terengganu state. 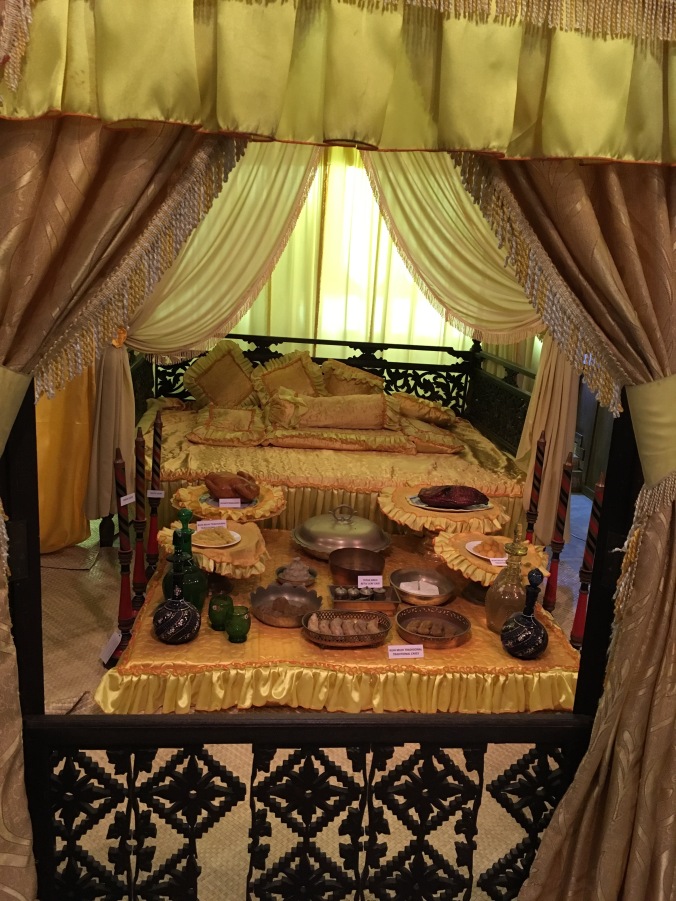 Outside there is also an interesting collection of boats and a clapped out Volvo on display. Behind the museum is an armoury exhibit containing a vast array of traditional weaponry.  It was more to James’s taste than Caro’s.

Next up was Istana Batu which is housed in the former crown prince’s residence. It is not as grand as you may imagine and more reminded us of a 1970s Holiday Inn. It continued the theme of displaying clapped out cars though this one was a Rolls Royce and had some explanation of its connection to the state having been used by the Royal Family. The museum house some interesting pieces hidden among mountains of stuff the royal family appeared not to want anymore, including a room full of plastic mementos from state visits and events which looked more like a cheap trophy shop. The museum did have interesting information on the role that the Malaysian Royals have played in the country’s governance  since independence. Not a great museum but worthwhile for these titbits.

After another sweep through the market and picking up some supplies we retreated back to our guesthouse. That evening we had planned to eat at the night market about which we had read good reviews. Unfortunately, when we arrived it was just a few stalls selling some decidedly ropey looking produce that appeared to have been cooking for days. So, we consulted tripadvisor and ended up having an average Indian. 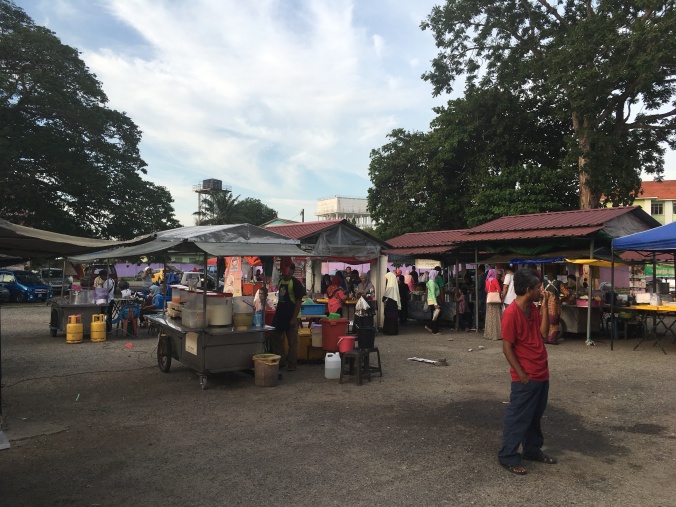 Our conclusion was that you can certainly find some entertainment in Kota Bharu but don’t go out of your way to visit. The next morning we were heading to the Perhentian Islands for some beach time. We boarded the local bus and took a very sweaty but easy hour ride to the ferry terminal in Kuala Besut. The town itself is pretty with small restaurants, colourful buildings and some street art.

There is a constant cacophony of birdsong as the top floors of all of the buildings are home to hundreds of swiftlets, their nests the key ingredient in birds’ nest soup. We had arrived just in time for Friday prayers so had to wait a couple of hours for our ferry, we had our millionth meal of noodles to pass the time.

Be warned; the ferry terminal at Kuala Besut is the epitome of organised chaos. Even when you go through a private company you still end up standing as part of an ever-increasing throng on the jetty, repeatedly telling a man with a clipboard what hotel you are staying at and watching other people board the boats in no apparent order.

Don’t worry, they will get you there and there is a method to their madness, just sit back and wait for them to bundle you on to a boat. The “ferry” turned out to be a fleet of a tiny boats each with enough horsepower to power a cruise liner. Ours was captained by a Malaysian boy racer with a death wish and the children who initially laughed with delight as we bounced over the waves were reduced to cowering behind their parents’ backs as our boat continued to make limited but aggressive contact with the water.

Very shaken up we arrived at Abdul’s Chalets on Perhentian Besar ready for some intense beach time. Safely back on dry land, we could appreciate the beautiful crystal-clear turquoise water and the perfect white sand. 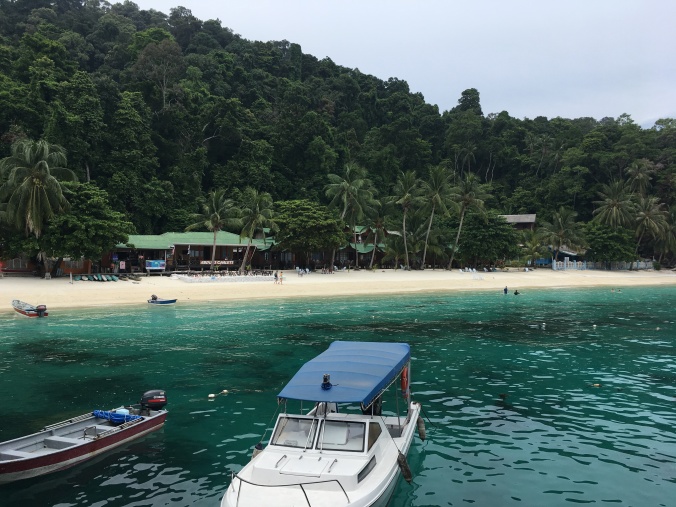 We had a glorious beachfront chalet and spent the next few days sleeping, swimming and eating.

We should have clocked that with a name like Abdul’s they were unlikely to sell beer but no, fortunately James tracked some down on day two from a small shop along the beach. They are happy for you to keep alcohol in your own fridge and drink on the beach, just don’t take it into the restaurant. Tuna Bay hotel, just along the beach, serves cold beer and cocktails but if you plan to have a few we would recommend bringing it with you from the mainland, it will definitely save you some money.

We did manage to summon the energy to go on a morning snorkelling trip, an activity which we hadn’t done for several months so we climbed in to the boat in great excitement. This boat journey was only mildly terrifying compared to the ferry. Here’s a fun fact; a majority of Malaysian states observe Saturday and Sunday as rest days however Kedah, Kelantan and Terengganu observe Friday and Saturday instead. The Perhentian Islands are in Terengganu so our genius plan to go on a snorkeling trip on a Friday was slightly flawed and the water was teeming with people rather than fish.

So, it wasn’t quite the idyllic trip that we had anticipated and we winced as we watched fins and feet scrabbled at the reef, but once we accepted that there would be a lot of people around and recognised that not everyone was beating the coral up it was still possible to enjoy ourselves. We had 30 minutes at each of the four snorkeling spots:

Turtle Beach: This spot is actually around the corner from turtle beach but its the name that we were given. We jumped in to the water and immediately saw a black tip reef shark, about 1 metre long, shoot underneath us and dart off in to the distance. It was certainly a promising start and there were a good number of fish around, a sting ray and two enormous bump head parrotfish made for a lovely snorkel.

Turtle Point: You pull up at a spot about 150 metres out from the beach where the water is about 4 metres deep and devoid of anything but flat seabed and, hopefully, a turtle. It is possible that there are usually more turtles around but on the day that we were there it was a solitary Green Turtle and at least 30 people swarming above it. Our group of 10 had him to ourselves for about 3 minutes before the hordes descended, at this point we swam away from the group and the boats, as it stopped being an enjoyable experience. Additionally, they don’t cut the engines whilst you are in the water so the fumes from 10 boats can get overwhelming very quickly, we used the time to enjoying floating in the water. It was cool to see the turtle though.

Fish and Chip Point: We aren’t sure if this is the official name but it’s what our boat driver called it. There were an inordinate number of people here, even the delighted-by-everything Dutch family who were with us suggested that maybe we try a different site. The captain just smiled and gestured for us to get in the water. Fortunately there is a quite a large area roped off and by swimming to one of the edges we found a spot where we had the reef to ourselves and could admire the enormous green hard coral, vast schools of fish and a ginormous puffer fish just minding its own business.

Shark Point: This place is pretty wicked, the coral has largely been battered to smithereens but there are loads of baby reef sharks darting around which was a real high point for us. The water can’t have been more than about 2.5 metres deep so we were able to get up close and personal with the black tips.

Overall, it’s worth doing the snorkeling trip but try and organise your time so that you do it on a weekday. 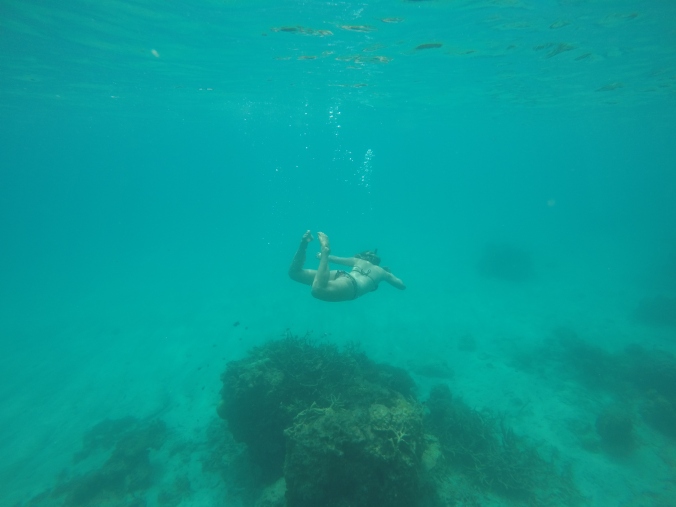 Another word of advice; we saw on a few websites that you can show up on the island and find your accommodation when you get there but we saw two groups of people wandering around with their backpacks trying to find beds, so you are better off booking in advance. We would also recommend Abdul’s, we were on a deal that included all of our meals, the snorkeling trip and ferry trip and it was great value. We also noted that the restaurant was always busy, and not just with Abdul’s guests, so it seems like it is some of the best food on the island as well.

Three days of beach time was the perfect antidote to hot cities and we squeezed in one last swim on our last morning before boarding the hell-boat back to the mainland.