Caro was not having a good day. Whilst shifting her packed backpack around she managed to open her flask of tea and spill a majority of the contents over her daypack, meaning not only a soggy bag but also, and worse, no tea to drink. Then she managed to clunk her head of the door of the taxi as she climbed in to it and spent the next 10 minutes blinking stars out of her eyes and the next 2 hours rubbing the lump on her head and scowling. James kept quiet.

Our stint in the Cameron Highlands concluded with a dramatic bus journey down through rolling hills of jungle interspersed with swathes of polytunnels, followed by miles of palm plantation, followed by hillsides which have been cleaved in two by dynamite and diggers to make way for roads and finally into Ipoh. We arrived at Amanjaya bus station, which is a way out of town so we took a taxi to our hotel right in the centre. Caro’s run of bad luck continued as we stood outside a very shut looking reception ringing the bell incessantly. When it became clear that no one was answering we had to suck it up and turn roaming on (we had yet to purchase a Malaysian sim card, our bad because it is very easy to do and saves a fortune). We eventually got hold of someone and got in to the hotel. Our room wasn’t ready but we could at least dump our bags, change and put on sun cream. This also gave Caro the opportunity to discover that her shampoo had exploded and, despite being in a plastic bag, had coated the inside of her bag and her trainers. James did not keep quiet, a mistake for which he was very sorry immediately after. Caro had a small hissy fit before striding out into the clammy heat of Ipoh in her hiking boots because her trainers were all frothy. Fortunately, the day improved from there on out.

We had to cross the river to get in to the Old Town and on our way there we encountered large a street market in full swing. 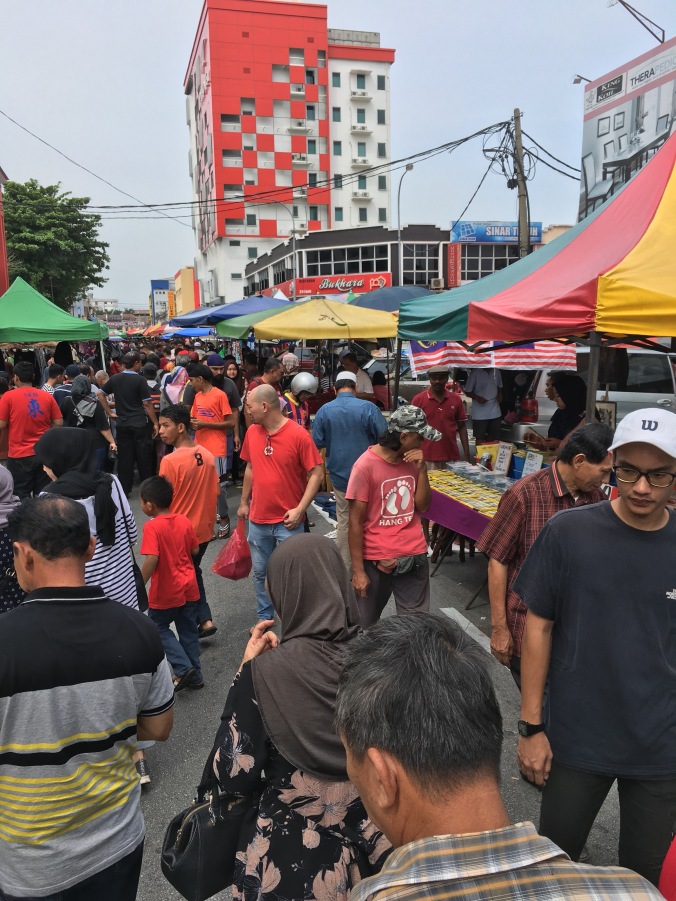 It was one of those fantastic markets that had legitimate stalls (selling fruit and veg, all manner of cooked food, clothes and kitchen utensils etc.) but these were interspersed with car boot sale type stalls that ranged from “antique” stalls selling crap from peoples’ houses to stalls of shoes that looked as though they had fallen off the back of a lorry or been stolen off someone’s feet. It was also heaving.

Lonely Planet assured us that the Ipoh Visitor Centre could provide us with excellent street art and heritage trail maps and the interweb assured us that the Visitor Centre would be open so we made that our first stop, skirting around the large padang where Sunday football matches were in full swing. The Visitor Centre was not open so we ended up navigating the trails via a blurry picture that James found on the internet. We managed though and Ipoh has some impressive sights. The “Taj Mahal of Train Stations” is quite an overstatement but the blinding white buildings of the station, town hall and courthouse are certainly worth a look.

The Birch Memorial Clock Tower is worth it for both the actual object and its story. The clock tower was completed in 1909 in memory of the first British Resident of Perak, James WW Birch. He was so thoroughly unpopular that he was stabbed to death with spears whilst in the bath. The very road on which the clock tower stands has since been renamed in honour of one of his killers, who is considered something of a hero. The whole story is, of course, far more complicated than that but that’s the basis. 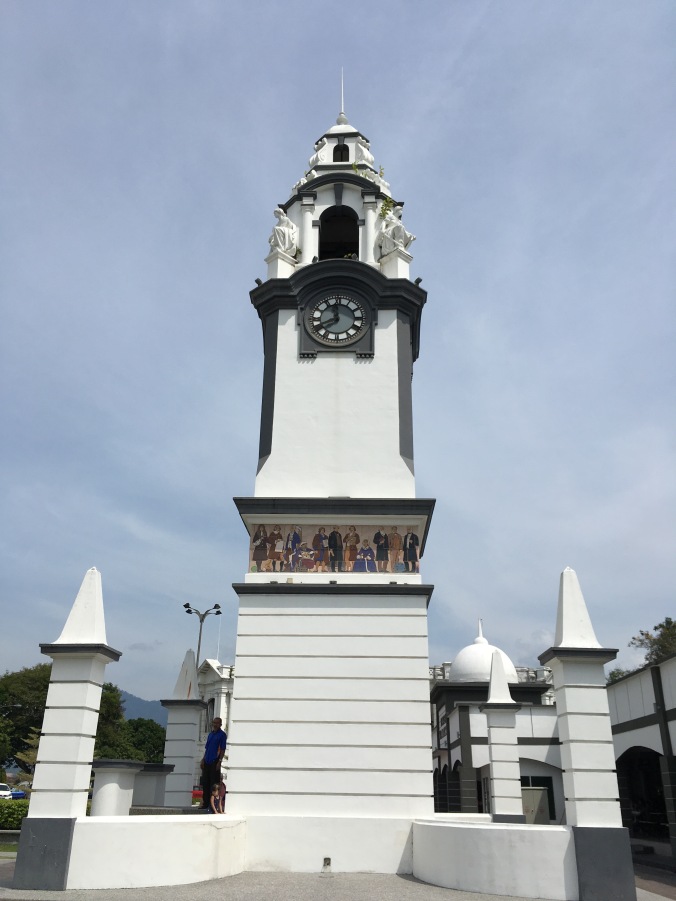 The panels that encircle the tower like a belt show the progress of civilisation, represented by everyone from a stone age hunter through the likes of Moses, Alexander the Great, Galileo, Marten Luther, Florence Nightingale up to Joseph Lister. It’s quite a feat to contract all human achievement in to four small panels and it really is quite a lovely thing.

One big draw for us was the street art and Ipoh certainly delivered on quantity. 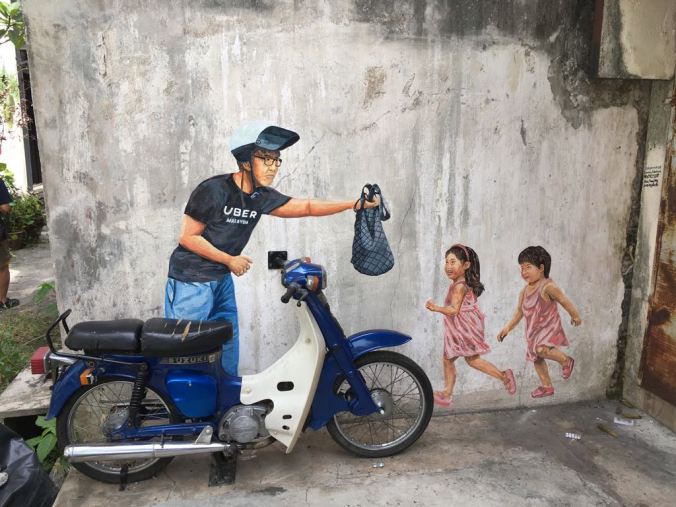 The quality was a little patchy at times but it didn’t matter with so much to enjoy. The showpieces of the town are those by Lithuanian artist Ernest Zacharevic. 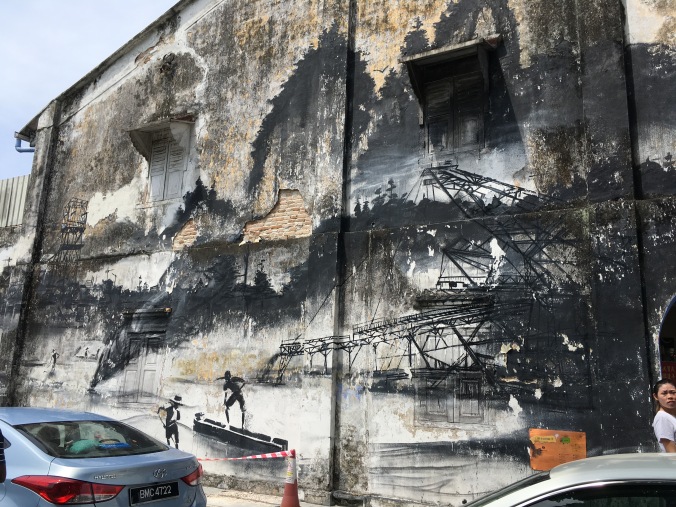 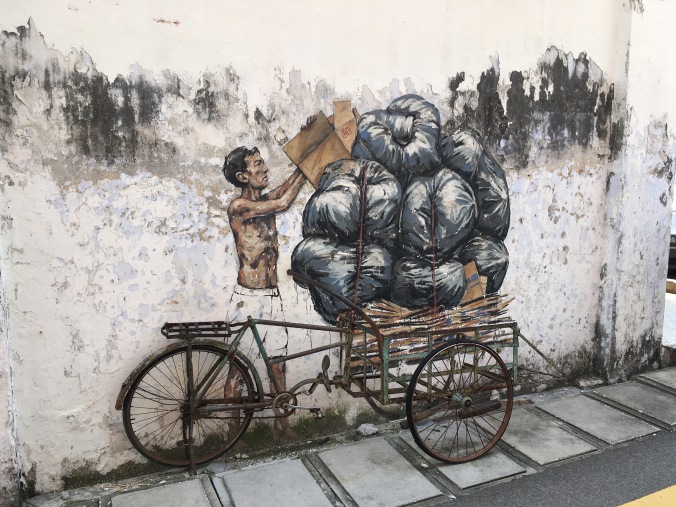 We sought out the three Concubine Lanes, there are a couple of different theories as to how the roads gained their names but what is certain is that prostitution, gambling and opium have all played a large part in their history. Ipoh’s old town is a hive of activity with narrow lanes jam packed with beautiful old shop houses and people.

Around the edge of the old town, once majestic buildings seem to be creeping towards disrepair but aging very gracefully. 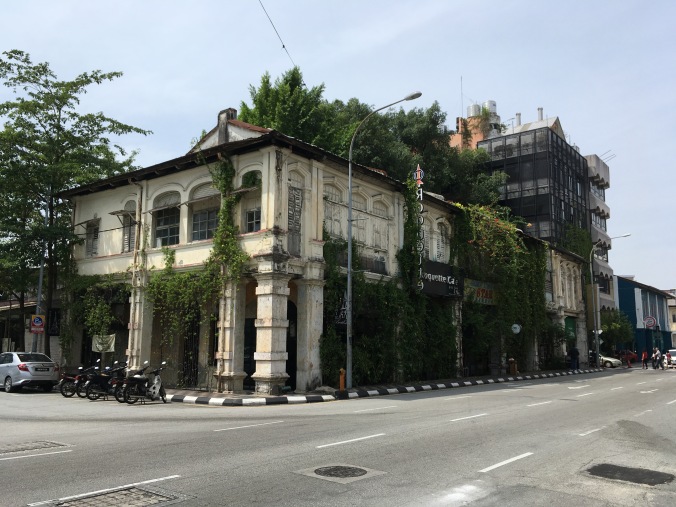 We wandered our way along to Little India for lunch, stopping at the highly recommended Sri Ananda Bahwan Banana Leaf. It had ceiling fans and therefore provided an opportunity for us to dry out our incredibly damp clothes and cool down just a little bit. Lunch was only ok but this was largely our fault as we had accidentally ordered tofu and it’s very difficult to make that taste like anything other than old sofa cushions. That beind said, the naan and accompanying sauces were excellent. 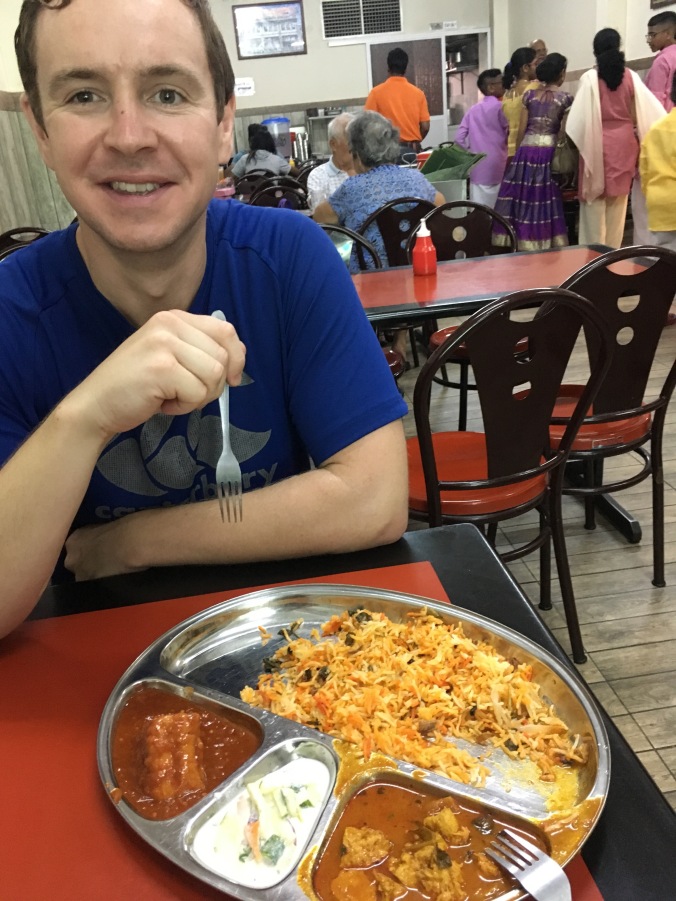 After lunch, we headed back in the direction of the hotel, ready to escape the now blistering heat. We made two stops along the way. The first stop was to purchase a Malaysian sim card which we should have done on day one in KL. The man in the 7-Eleven was very helpful and gave us his mobile number to call in case we had any issues. Our second stop was Mural Lane which is covered from end to end in street art. Once again, the quality varies but it’s a lovely, joyful road to walk down.

We reached the end of mural lane and on the opposite side of the street Caro was delighted by a line of houses painted in colour spectrum order and she immediately nicknamed it rainbow road. 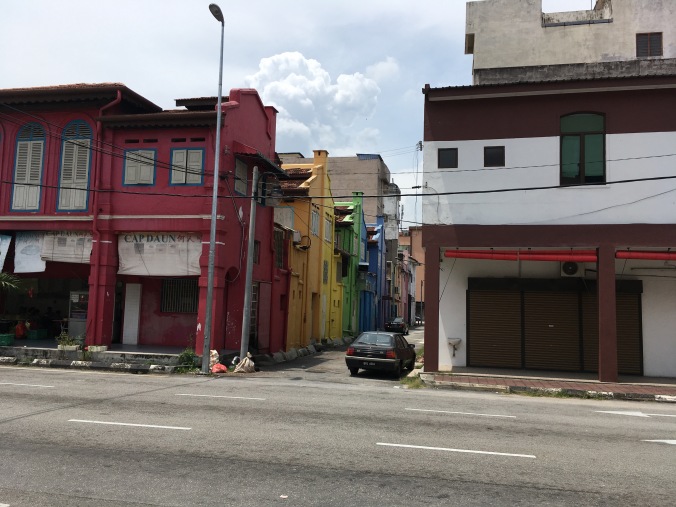 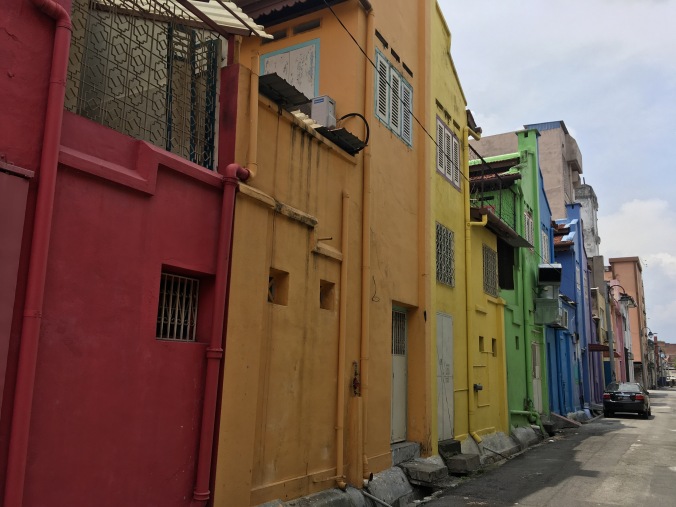 From here it was a hop, skip and a jump back to our hotel where our room was ready and blissfully cool. We spent the remainder of the afternoon in the hotel and when it came around to dinner time we decided, for the first time, that we did not want to venture out again. The torrential rain may have had something to do with it. James was despatched to buy pot noodles and we turned in early.