Thus far our route had made some vague sense despite covering an ambitious amount of ground in a short period of time. Over the next few days all common sense went out the window as we had a date to keep in the south of France. Caro’s mum was celebrating a milestone birthday and, unbeknownst to her, the whole family was descending on the house to celebrate with her.  At this point we were a little bit ahead of schedule due to the weather so we decided to spend a day exploring Venice, which hadn’t been on the original itinerary but was kind of on the way. Also, as Caro had already been to Venice and we were unlikely to make a separate trip specifically to visit, it seemed a good idea to take the opportunity to see it now.

Our campsite was called Camping Rialto and it had changed very little in the 10 years since Caro had stayed there with her brother on their trip around Italy. It was ten minutes to Venice by bus and by far the cheapest option so we were not complaining. The only downside was that it was also hosting both French and Belgian school groups and our first night coincided with the football world cup semi-final between those two nations. It was a rather boisterous evening in the camp bar. The next morning, we were awake early and so headed into Venice before the crowds really built up. We hadn’t realised that we needed to buy a ticket from the campsite before boarding the bus so ended up, entirely inadvertently, travelling in to Venice for free. We do not recommend this course of action so check with your accommodation as to how to secure a bus ticket.

Once in Venice proper we weaved through the streets and over canals in the general direction of the Piazza San Marco. It was surprisingly quiet at 9am and nice to see locals going about their mornings and have an opportunity appreciate the more day to day, less glossed side of the town. 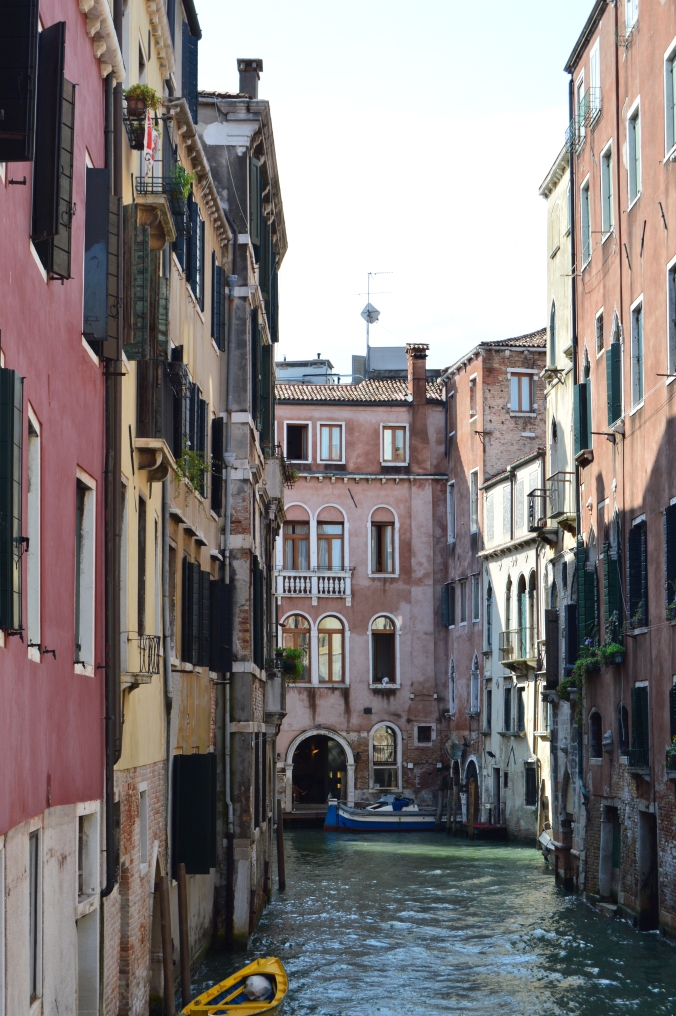 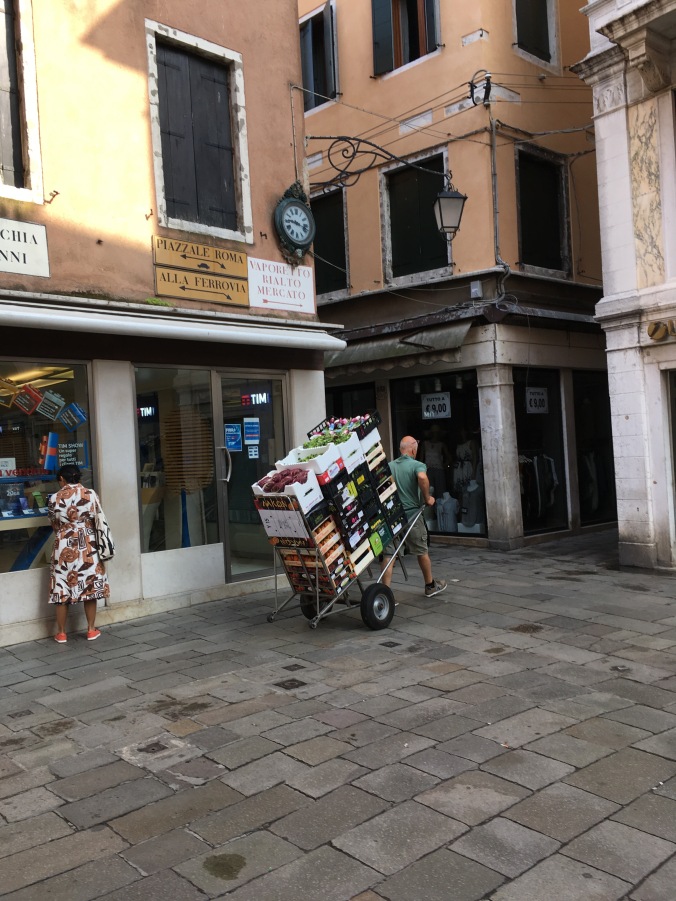 Our first stop was the Rialto bridge, which was all but abandoned. Caro’s memory of the bridge was hordes of people and shops covered top to bottom in Venetian masks. But the shops were shut and the people scarce, it was absolutely wonderful and caused Caro to reassess her previously held tepid opinion of the place. 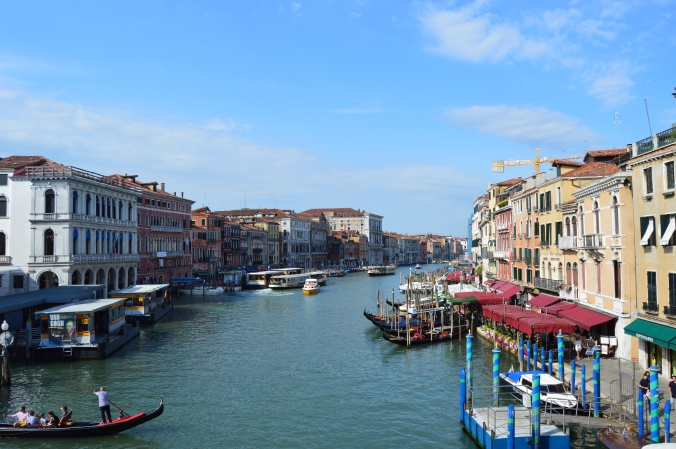 When we arrived in Piazza San Marco the queue to the San Marco Campanile (the bell tower) was tiny so we decided to make that our first stop. 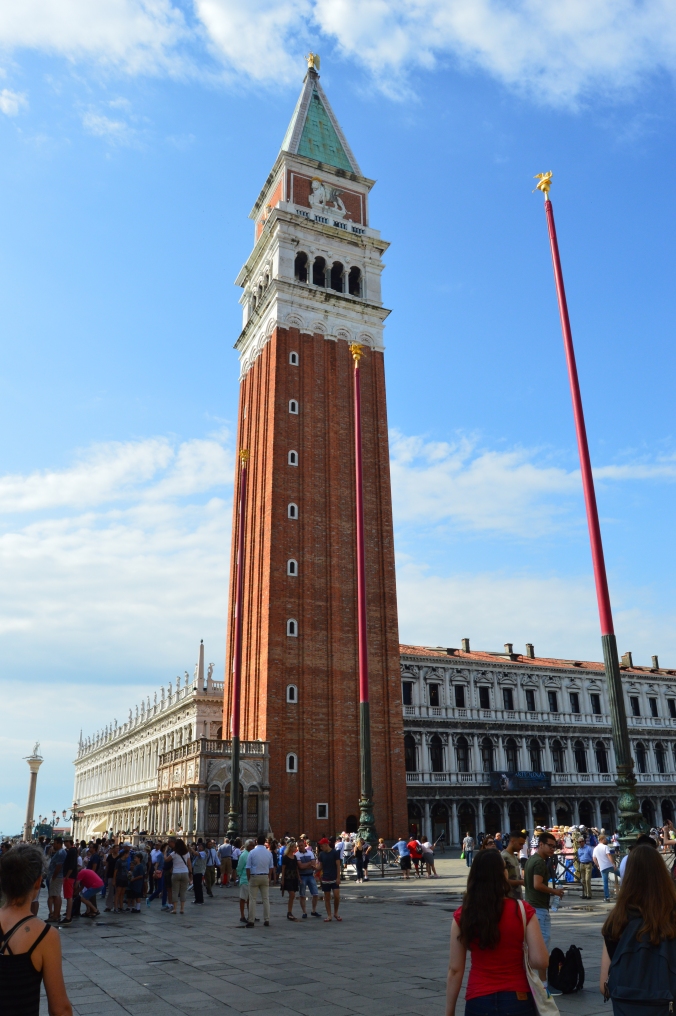 Unfortunately, or fortunately depending on your point of view, you cannot climb the stairs so we were whizzed to the top in a lift. The views from the top are pretty spectacular. 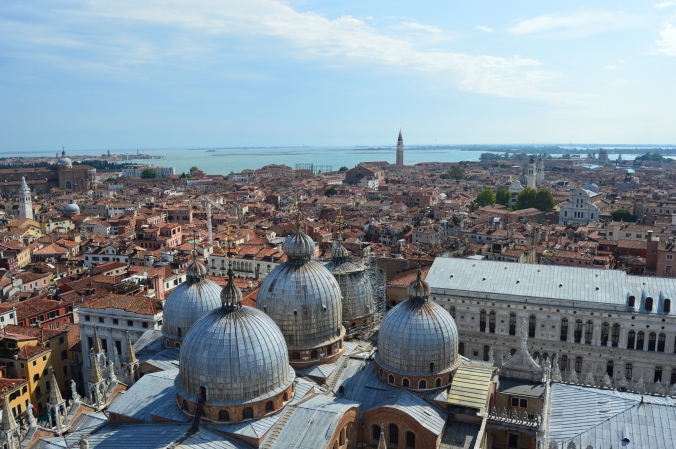 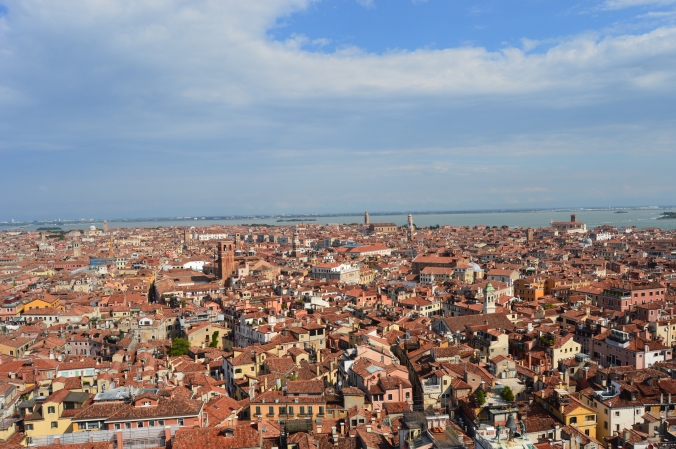 When we got back to ground level the queue to visit San Marco Basilica was long but moving pretty quickly so we joined up and within 25 minutes were making our way through the impressive doors. This wait gave Caro time to do pull on some extra clothes in the queue (unnecessary as they give you robes inside the door if needed) and also allowed us some time to snap pictures of the gorgeous exterior. 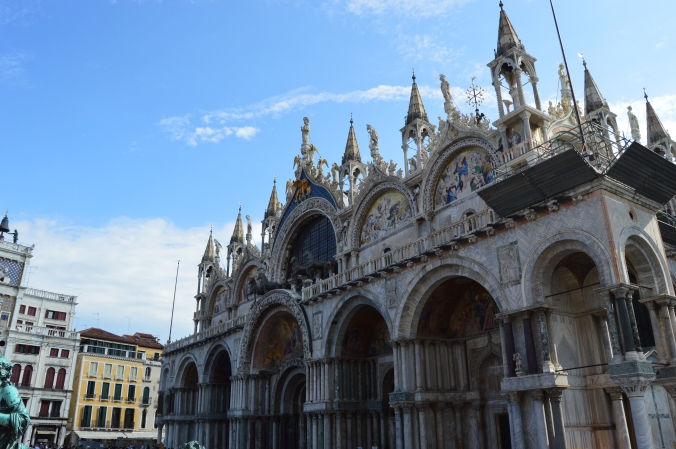 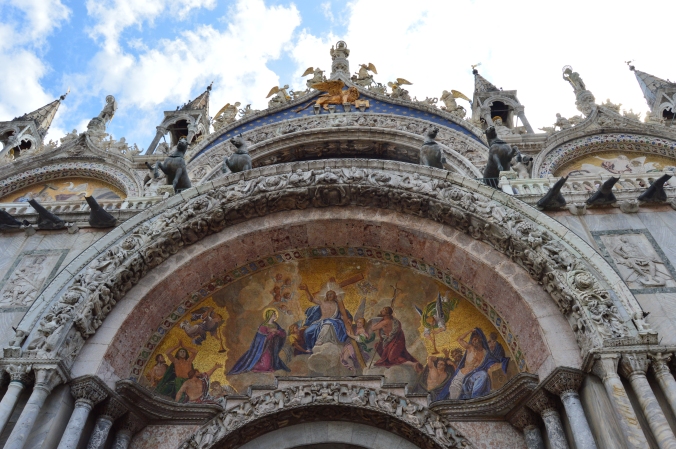 Inside the Basilica is absolutely stunning, you aren’t allowed to take photos so you will just have to take our word for it. By a stroke of luck we were there when a visiting choir were performing and the musical accompaniment was a lovely bonus to our visit.

Next up was the Doge’s Palace or Palazzo Ducale. The seat of Venetian power from the 9th century, although the existing building dates from the early 15th, the flamboyant pink and white building is immediately next door to the basilica and sits in pride of place on the waterfront. 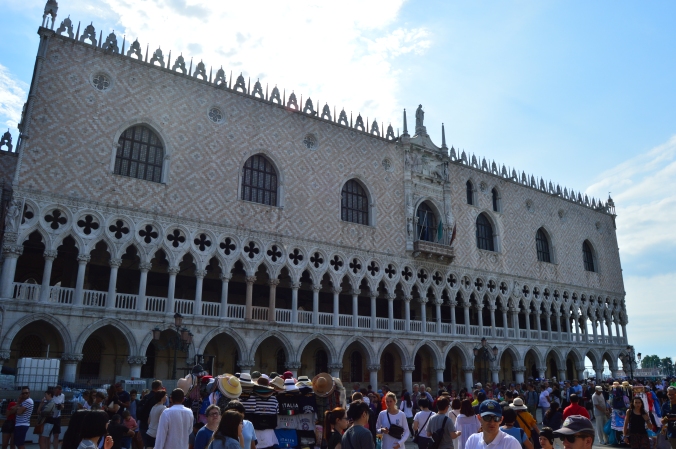 It was an absolutely fascinating place to visit and we learned a huge amount about the palace and the Venetian republic. The detailed audio guide is an absolute must, there are informative sign boards in each room but the audio guide is a veritable treasure trove of information.  We were only sorry that we weren’t able to book on to the Secret Itineraries tour which takes you into the back rooms where the real governing took place, it would be top of our agenda if we were to return to Venice. There is still plenty to see on the self-guided tour from the mish mash of architectures in the courtyard to the exquisitely painted ceilings and highly decorated rooms inside. 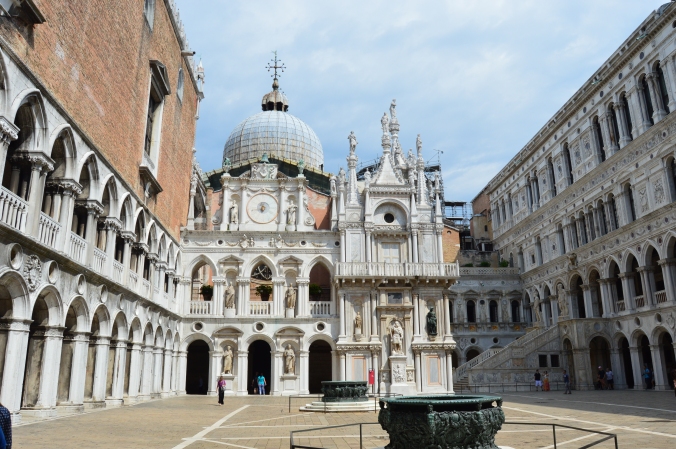 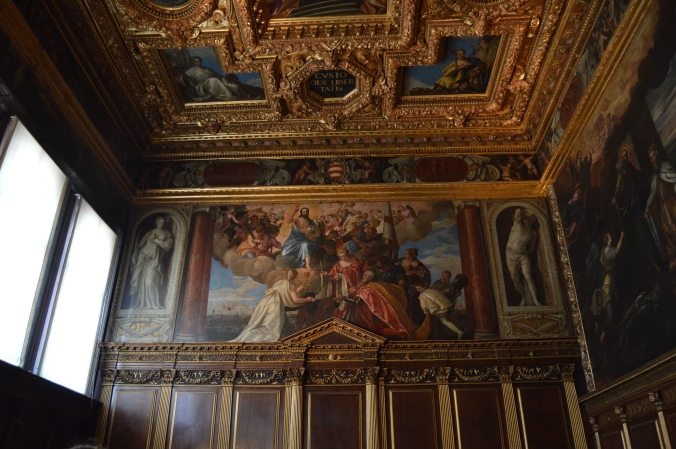 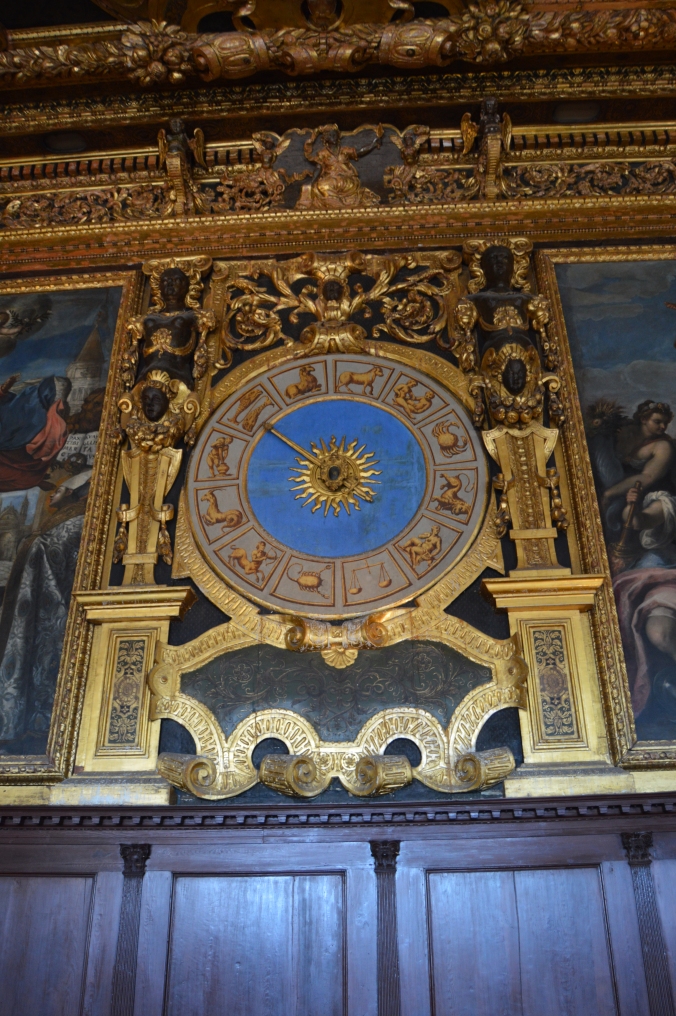 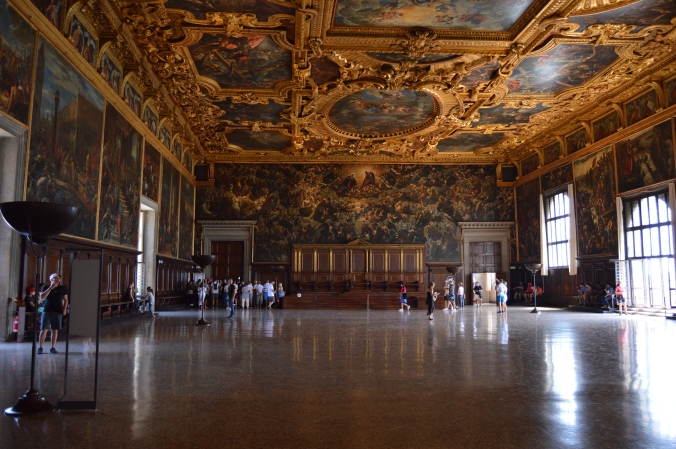 Palazzo Ducale is also home to the famous Ponte dei Sospiri, or the Bridge of Sighs, which connects the palace to the prisons on the opposite side of the Rio di Palazzo. Tourists swarm the Ponte della Paglia to get an exterior photograph of the rather innocuous looking bridge. 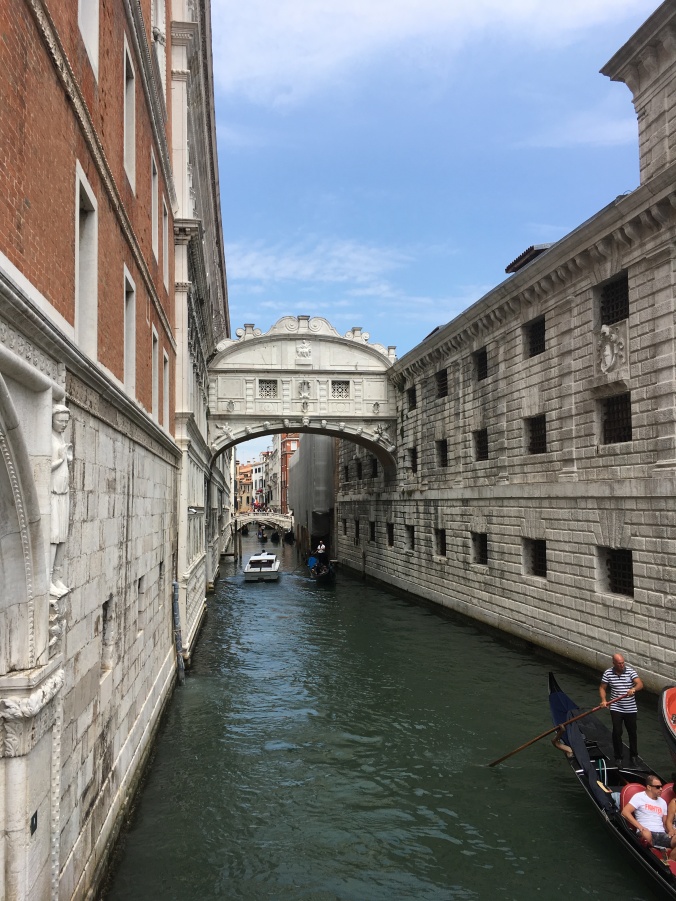 Whilst the origin of the name remains unclear the most popular theory is that the “sighs” are those of newly incarcerated prisoners as they cross the bridge and get their last glimpse of the city. This is a view you can only appreciate by touring the Palazzo Ducale. 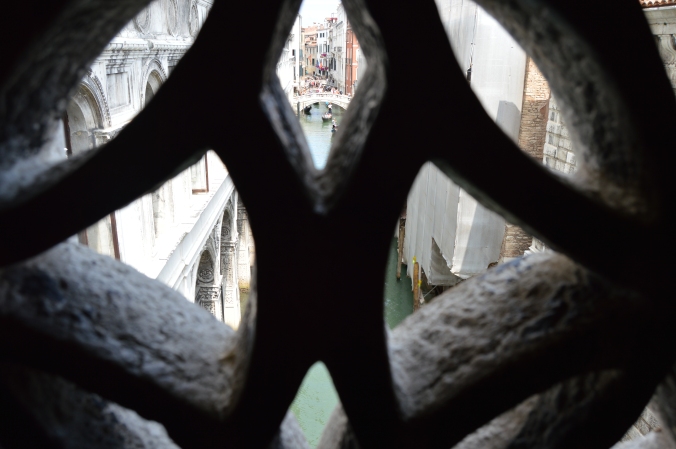 After our couple of hours in the Palazzo we returned to the now packed Piazza San Marco, stopped down a side street for an unavoidably pricey lunch and wandered slowly back to Piazzale Roma. Our stroll took us over the famous wooden Ponte Dell’Accademia, which was sadly undergoing renovation so we weren’t actually able to see it, and back through the slightly quieter streets of Dorsodouro. After a compulsory gelato stop, we managed to pay for the bus on the way back to camp. Fortune was on our side as the heavens opened just as we settled down in the van for a nice cup of tea. England played Croatia that evening so we decided to have pizza in the campsite pizzeria and watch the game. The pizza was excellent, the outcome of the football was not.

The following day we embarked on quite possibly the most ridiculous detour of our world tour so far, a three-hour drive into Florence to buy some plates and presents for Caro’s mum. We admit that this seems like complete foolishness for the sake of crockery but they really are beautiful plates and it was for a special occasion.  Our two hours in Florence included a grand total of one shop and another stop for gelato before getting back on the road bound for France. We spent the night just short of the border in Varazze.

We were in no particular rush the following morning as we only had about 3 hours of driving to cover in the whole day. This meant that we had ample time to make a short detour once we had crossed the border in to France. James had never been to Monaco despite Caro’s family living only a couple of hours away and he was eager to see what it had to offer. Caro’s repeated refrain of “cars, boats and red pavement” didn’t really cut it as experiencing the place so we left the autoroute and took a spin around town. It was as James expected but he can now say he has driven round a good percentage of the F1 race track in a van.

We carried on towards Caro’s parents’ house taking a stop for lunch and a swim at the Lac de Saint Cassien. The surprise reveal was not until the following day so we camped up in the neighbouring village of Bagnols-en-Foret that night. This came with one enormous benefit; we could go to our favourite pizzeria/biker bar, En Face, for dinner that night. If you happen to be in the area you simply have to go, the Royale pizza is our unerring favourite. 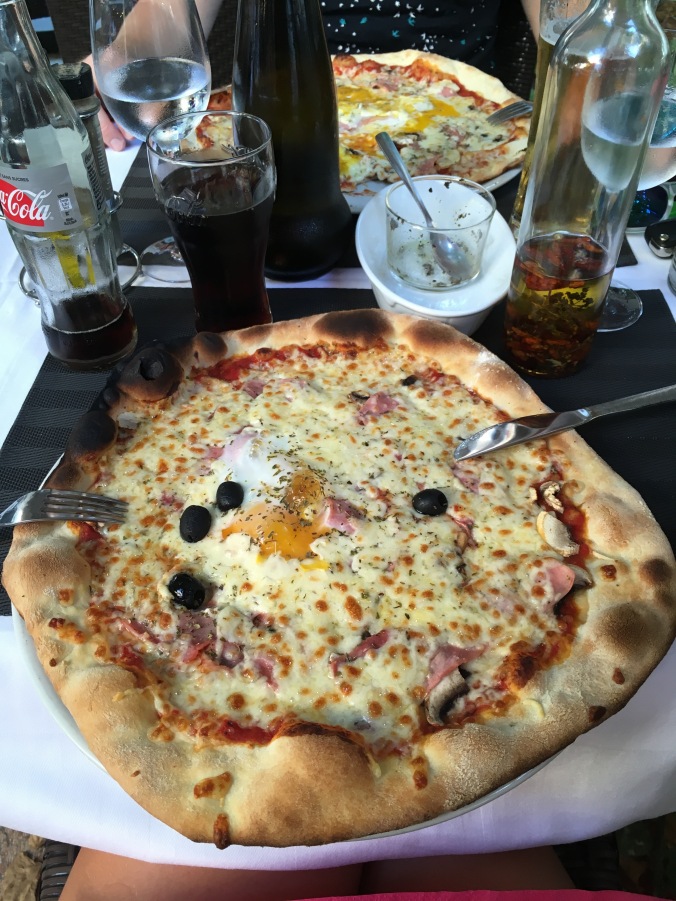 The restaurant is in the village square, which is lovely in itself and our trip also coincided with one of the frequent summer muscial extravaganzas so we enjoyed live music with our meak.

The next morning we met with Caro’s dad for the final preparation while Caro’s mum was out planning tennis. A couple of hours later we met up Caro’s brother and his wife to wait for Margaret to return to the house so that we could then arrive and surprise her. Typically, she was late and we spent 45 minutes loitering on the side of a very hot stretch of road before giving up and going for a cold beer on the terrace. 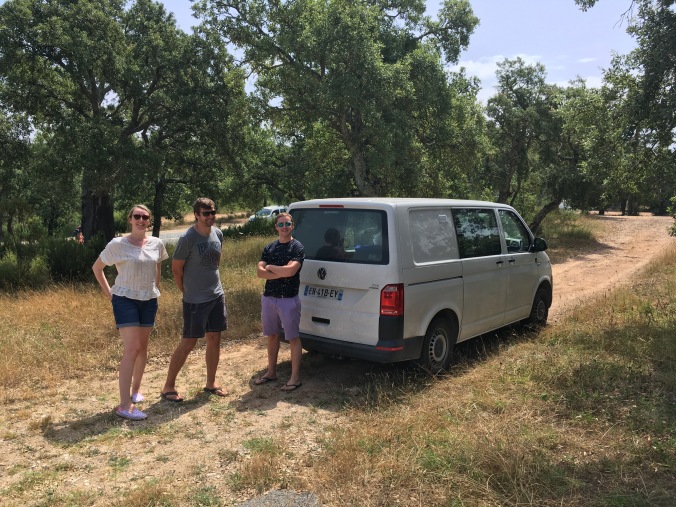 This still didn’t ruin the surprise when Margaret eventually arrived home. We spent the next few days enjoying the sunshine, good food and more than the odd glass of champagne.  Naturally, a game of highly competitive split-level croquet was also compulsory.

With another family friend, Jemma, also in attendance the house was full so we had the pleasure of camping on the driveway. 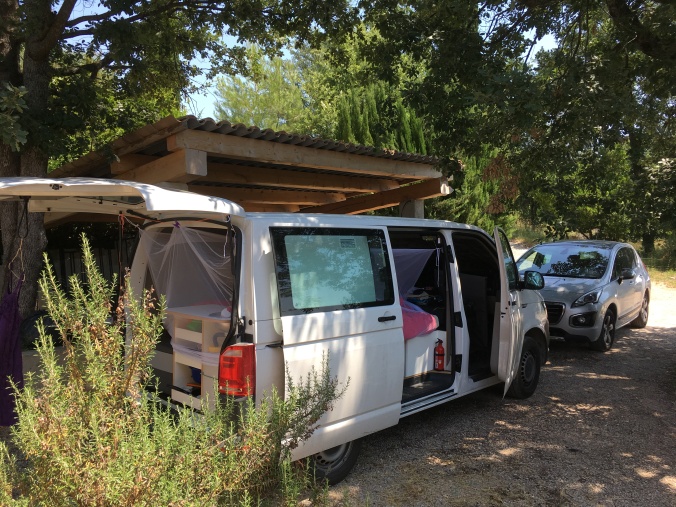 The celebrations were wonderful and worth every minute of planning and driving, including the detour to Florence. 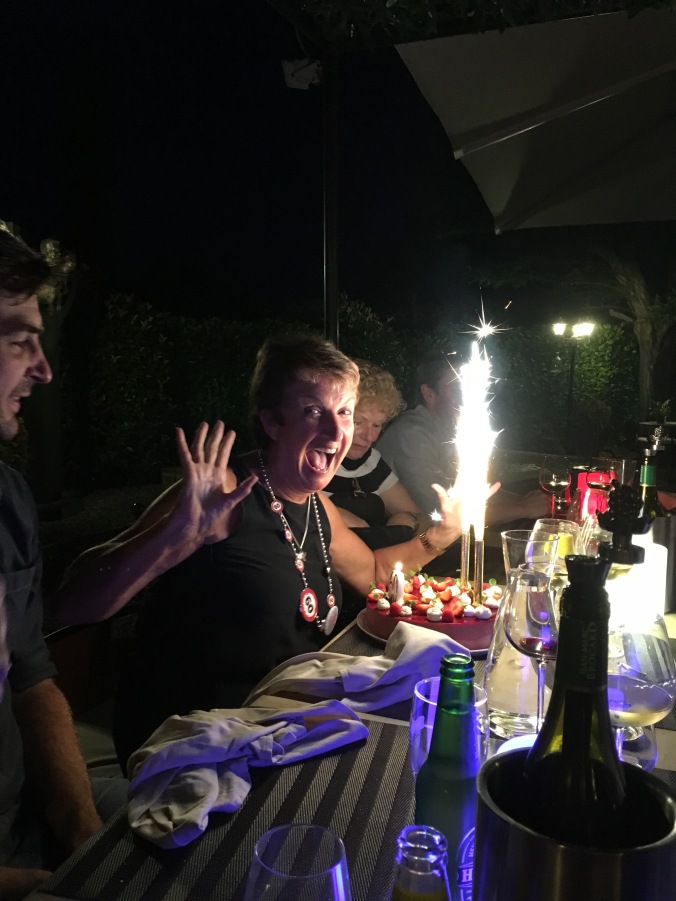 We ended up staying an extra night to recover and this gave us time to get a fair bit of planning done for our Malaysia trip. It later transpired that we managed to get our arrival date in Malaysia wrong and had to rejig a couple of our bookings to correct for this. The moral of this story is that after 10 months of near solid travelling we are still a little bit pants at it.