It felt inappropriate to include our visit to Auschwitz as a section of another post which would likely contain light-hearted topics and frivolousness, so we decided to write about it separately. We have included some practicalities about visiting at the very end, the main body of the post is about our experience.

This will not be a long post, a few short paragraphs at most, partly because so much has already been written about Auschwitz and the horrors that unfolded there and partly because it is extremely difficult to convey what it is like to stand on the ground where so many perished. There is also only one photograph in this post; it is place that you need to experience in person and anyway, in all honesty, we didn’t have the desire or inclination to take more than one. We share that picture here; the infamous gates which chill the blood even on a hot June day like the one on which we visited. 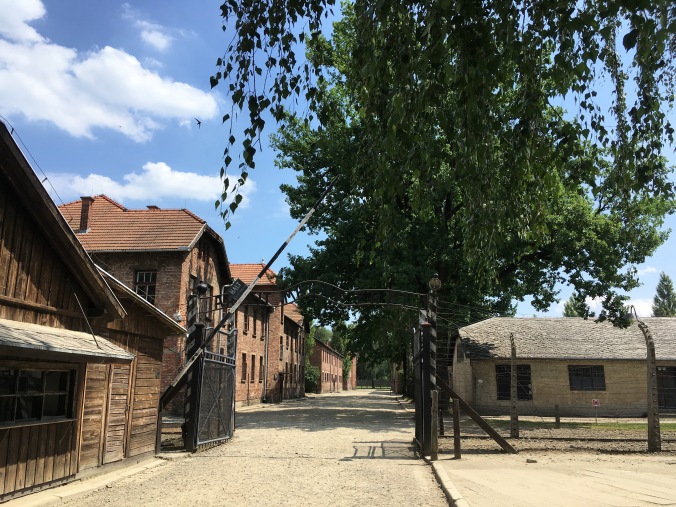 The best way to describe our state of mind as we waited for our tour to begin was very apprehensive and nervous. We didn’t know what to expect or how we would react once we got inside. The first thing that we will say is that the official tour, run by the museum itself not tour groups from Kraków, is absolutely excellent and we would highly recommend it. It is an incredibly difficult thing to lend the appropriate weight to a topic whilst also remaining informative, being unemotional without seeming dismissive. Our guide conducted herself with a poise and empathy that we found admirable.  We would also gently advise that studying the Second World War and the Holocaust does not particularly prepare you for the impact of visiting the camps themselves.

The word that we finally settled on to describe the experience was harrowing; at times we couldn’t actually absorb the scale of the horror and at times we were brought to tears by the pointless, brutal cruelty of it all. There were three camps in the area but only Auschwitz I and Auschwitz II Birkenau remain. It’s important that you visit both camps. Auschwitz I is almost entirely intact and includes a vast number of exhibits, all of which are upsetting and shocking but also very detailed and informative. The tour of Auschwitz I includes walking through the only remaining gas chamber, which is awful. Auschwitz II Birkenau was partially destroyed by the SS as they retreated and was partly deconstructed after the war but still looks eerily like the pictures from its time of operation, you can imagine all too clearly what it must have been like, the unloading platforms for the trains are exactly as they were.  Auschwitz II Birkenau also hosts the memorial, between the ruins of two gas chambers and crematoria. It bears the inscription:

FOR EVER LET THIS PLACE BE

A CRY OF DESPAIR

AND A WARNING TO HUMANITY,

WHERE THE NAZIS MURDERED ABOUT ONE AND A HALF

FROM VARIOUS COUNTRIES OF EUROPE.

Before we went to Auschwitz-Birkenau we had said that we felt that it was something that you should do, even if you don’t particularly want to. We stand by that; it’s important to come face to face with the very worst that we are capable of, it’s how we make sure that it never happens again. Now that we have been we can say that if you have any interest in the history you will want to go, because it is a phenomenal museum and a moving tribute to the millions who died there.