Almost the very first thing that we saw when we arrived in Poland was this:

So, we were off to an awesome start and we continued to enjoy our brief foray in to the country. It was late afternoon when we crossed the border and after our earlier walk we were really just looking for a campsite and a hot shower. We found Camp 9 Nature Camp on maps.me/Park4night and, although there were pictures, it didn’t do justice to the little slice of heaven that we found ourselves in. 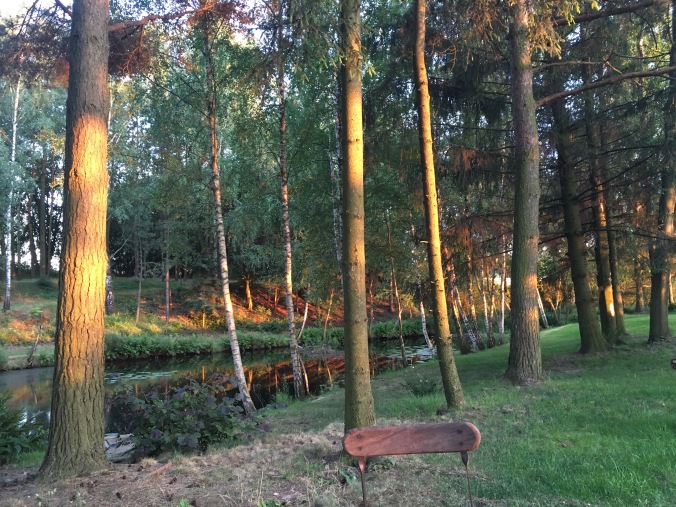 It was luxurious compared to our usual campsites and we also had the place entirely to ourselves. Our hosts informed us that school holidays started in Poland in a week’s time, a good month earlier than in the UK, and that they would be jam packed all summer. We made a mental note to book ahead from then on, which we have still failed to do even once.

The following morning, we were on the road towards Kraków. Our main observation from this journey was not the scenery but rather that Polish drivers are absolutely insane. Having now been to a few more Eastern European countries we know that this is not restricted to the Poles, nor are they the worst offenders, but at the time we were taken aback by quite how atrocious the driving is. It appears to be standard practice to wait until you are on a corner before overtaking and speed limits are for wimps. We sat cowering and flinching every time another car came in sight in the rear-view mirror. This need for speed was particularly daunting when pulling out of junctions or entering roundabouts because Delaney is an extremely reluctant starter and unless you have your foot to the floor will stall in first and the concept of staying in second if the car is already moving is completely out of the question. (If you take time to listen to the song “Delaney’s Donkey” you will appreciate the name choice and will also have a fantastic new tune to add to your playlist.) We have therefore juddered our way around Eastern Europe with an ever-lengthening tail of irritable local drivers.

We had two places to go near Kraków and we actually visited Auschwitz-Birkenau on the first day, but we will cover that in a separate post and skip to the following day and the Wieliczka Salt Mines. (We did originally plan to both in one day but this, whilst possible, would have been exhausting and meant rushing through.) The salt mines are a regular feature on day tours from Kraków but as we had our own transportation we simply showed up and booked on to the first English tour available. Despite the large number of people there we only had to wait about 30 minutes before our tour started so, if you speak English, it doesn’t look as though you need to book ahead. A vast majority of the tours are in English but that didn’t stop them piling over 30 people on to the same tour which, at £20 each, seemed just a little bit unreasonable.

We were all issued with headsets and stomped our way down 380 steps to 61m underground, being assured that we would be taking the lift that we could hear rattling next to us on the way back up. We were pleased to hear this because it was a loooong way down.

Once at the bottom the tour began in earnest and we were led through a series of corridors and chambers by our guide who was dressed up like a tin soldier. The quality of the headsets is pretty poor so unless we were stood right next to him we couldn’t actually hear a word that our guide was saying. This was problematic in a group so large and, again, seemed a pretty poor show for the price that we had paid to get in. The tour was probably about two hours long and we would estimate that about 30 minutes of it was diverting. The most spectacular room was definitely the Chapel of Saint Kinga which really is astonishing, with every intricate detail carved entirely out of the salt.

Even the chandeliers are constructed from salt. 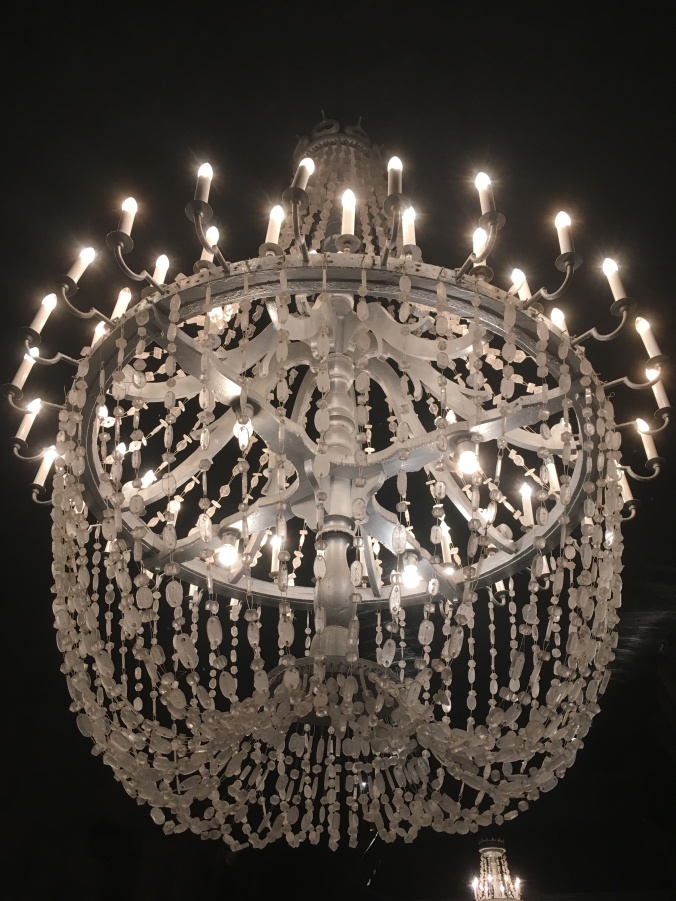 Our apologies, pictures are very difficult to take because of the light and the fact that everything is made of salt but you can rest assured that it looked pretty cool. Unfortunately, the tour felt like it was geared more towards children; we were told about a couple of legends, shown a light show with some gnomes and a rather contrived display with some lights and a lake and classical music, which was just plain baffling. What was frustrating was that there really was the potential for it to be a hugely interesting tour. We’d have loved to hear more about how the mine’s history, how it was built and operated but sadly we received only titbits and legends. In fairness, we were on the “Tourist Route” and perhaps the “Miners Route” may have been more informative, and you get to dress up like a miner. On the plus side, we were pretty certain that they would sell salt and pepper shakers to add to our collection.

We were free to wander around the underground museum, souvenir shops and restaurants at the end of our tour but we decided to make straight for the exit. We queued for the lift and were led by a guide for a good 20-minute walk before we reached the lift doors. When we emerged above ground it took us a couple of minutes to realise that we were in a completely different place to where we had gone down, the guide had taken us to the wrong lifts. We resorted to maps.me to find the car again and had a pleasant stroll through town, occasionally crossing paths with other people from our tour group also trying to find their vehicles, phones in hand. 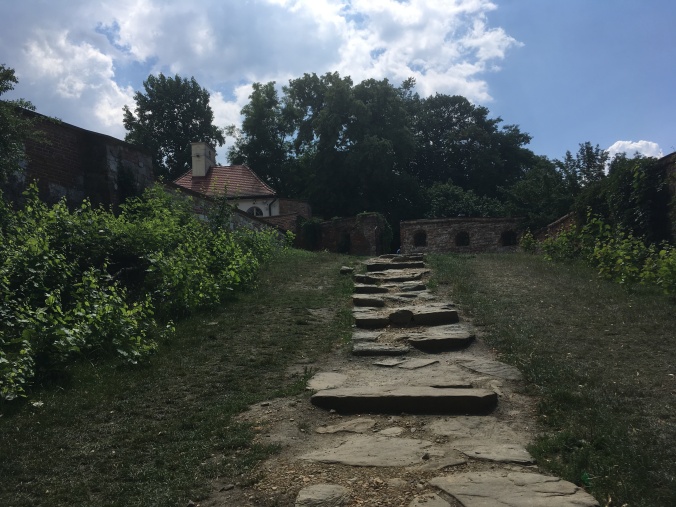 So, on balance, we are glad that we went to the mine because it really is an incredible feat of engineering and some of the chambers were astonishing. It was also amazing to think that we were as deep as 135m underground and in 2 hours saw only 1% of the entire mine. Personally, we wouldn’t fork out for it again but we do know people who have absolutely loved it so it’s definitely a matter of individual taste, apparently Pope John Paul II was a big fan. What may be a good alternative is to go to mass on Sunday morning at 07:30am. You are taken in a lift down to Saint Kinga’s Chapel, get to see the coolest bit of the mine and get shunted back up again, and it’s free! You do of course have to attend mass.

Our afternoon was spent driving pretty much directly south to Zakopane, at the foot of the Tatras Mountains. To get there we passed through the town of Nowy Targ which we had to assume was the surgical enhancement capital of Poland based on the sheer number of adverts that we saw for plastic surgery and dental implants. Once we reached Zakopane we immediately drove out the other side of the town to seek a campsite away from it all and landed on one with a beautiful view of the mountains. 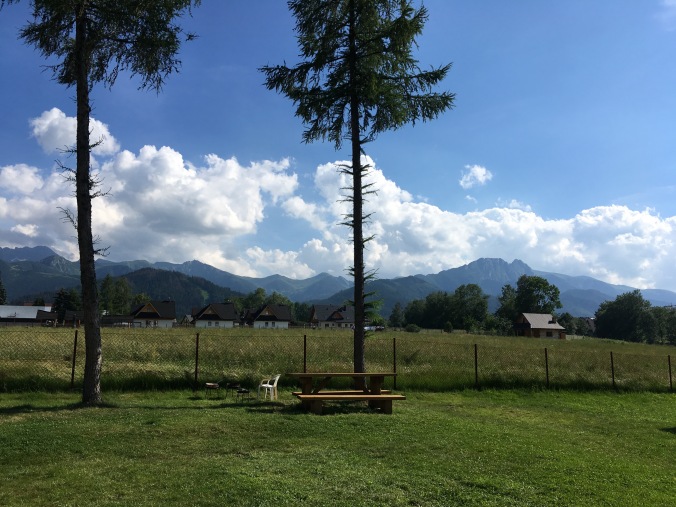 We had a glorious afternoon in the sunshine and looked forward with eager anticipation to our hiking in the hills the next day. Overnight the heavens opened and it rained relentlessly all night, we woke up the following morning to a very different view. 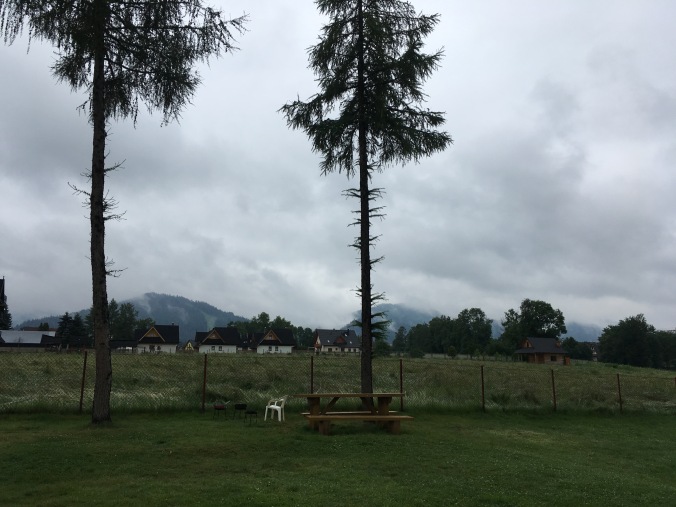 Now, we will hike in bad weather if there’s a reason but the Tatras mountains are all about the view and we couldn’t see 20 metres ahead of us. We checked the weather and it was forecast to be truly grim for the next few days, time that we didn’t have to spare, and so this particular hike would have to wait until another trip. Given that we have only seen a tiny fraction of Poland it is very likely that we will be back again to sample more of its offerings.