Once we had made our decision to explore Europe, we needed to find a campervan, our preferred mode of travel. This turned out to be a fairly challenging undertaking at the last minute in summer but James was persistent and finally tracked one down. This large hurdle crossed, it was pretty straight forward organising ourselves. We needed to get to Lille to pick up the campervan so we booked Eurostar tickets from St Pancras and, after some final bits of packing, we were ready to hit the road. James’s mum took us to Diss station early on Friday morning and we found ourselves sat on the same bench on the same platform as we had been nearly 9 months earlier, this time with considerably less stuff than when we left on the first leg of our trip. 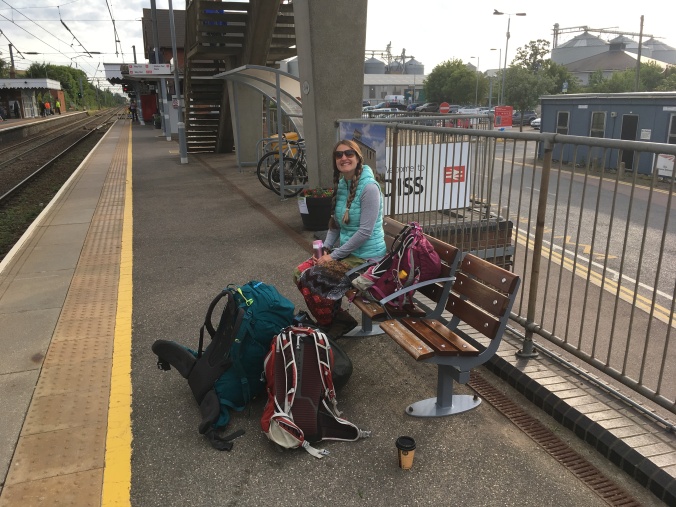 Despite issues with trains to London that week, we actually had a hassle-free journey and made it to the Eurostar with plenty of time left to indulge in a second breakfast. We had failed to realise that the Lille train is also the train that goes to Disneyland Paris, so we were joined in the waiting area and on the train by an enormous number of very, very excited children and proportionately harassed looking parents. This made for a slightly less peaceful journey than planned but, all in all, it was fairly easy going.

We arrived in Lille and were picked up from the station by Celine, the delightlful lady from the rental company. After a quick nose around the van, some paperwork and melting our credit card we were once again in possession of a campervan and we immediately set out for Belgium, stopping to stock up with supplies at a supermarket on the way. We were keen to get some kilometres under our belts so we decided not to stop at all in Belgium and just drive straight across in one go. This plan failed pretty early on as we realised that we had failed to buy car snacks and had to pull in at a motorway service station to rectify the situation and keep Caro from getting hangry. The drive across Belgium was fairly unremarkable, the landscape was largely flat with the occasional large commercial building on the side of the road. We decided to camp 30km short of the German border and tested out the Park4Night app for the first time. Celine had recommended it as a good way to find campsites. The first place that we tried was a car park on the site of an interesting looking mine but unfortunately the app had the facilities wrong and we were forced to move on.

The second place was in fact an actual campsite in Soumagne and we swiftly secured ourselves a spot, ready to stop driving for the day. It was an interesting place. There seemed to be a lot of permanent residents and many of the “caravans” appeared to have foundations, permanent decking and garden sheds. It didn’t matter very much to us as all we needed was a place to sleep and, in any case, we were delighted to be back in the weird world of campsites where simple solutions to simple problems made us smile, like this soap dispenser. 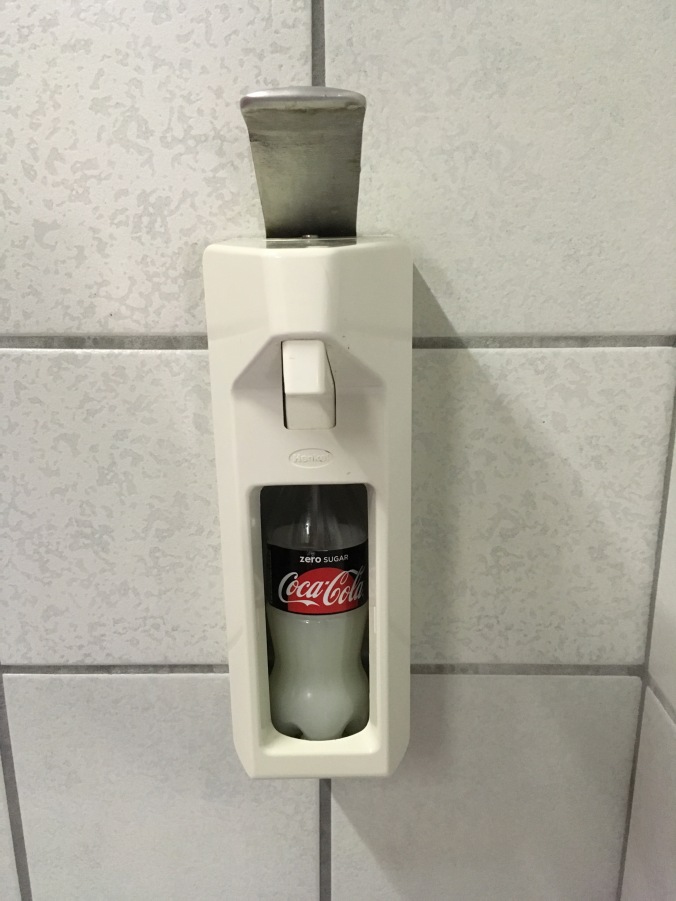 Setting up for the night was a pretty quick undertaking but we did spend a fair bit of time attempting to affix the window covers with relatively little success, an ominous sign that we would be sleeping in plain view of all for the next 5 weeks. However, we were back in a campervan and therefore in our happy place. 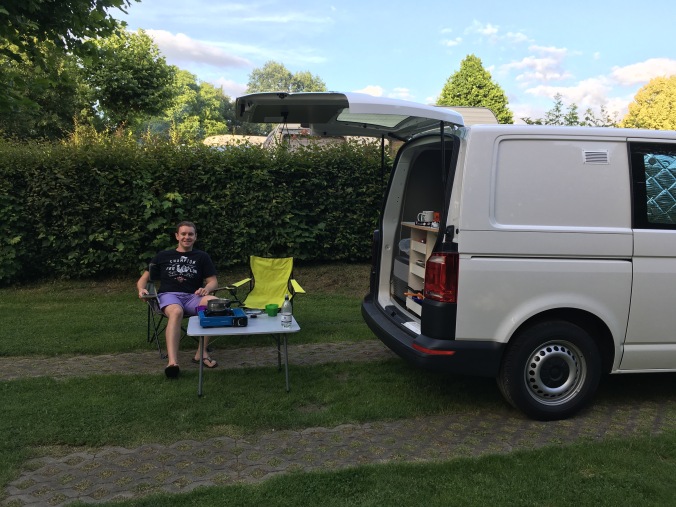 The following morning we crossed the border in to Germany and, almost immediately, the landscape became prettier and more varied. As Eastern Europe was our target, we had originally planned to drive straight across Germany as well but after the previous day of driving we decided to make a couple of stops along the way. Also, our GPS was determined to take us through the middle of Frankfurt, which we had absolutely no desire to do, so our planned detours would also mean a slightly longer but much nicer route.

We made our first stop at Burg Eltz, a castle which has overlooked the Moselle River since the 9th century.  We pulled in to the carpark and handed over €2 to a man in a hut. We’re not sure what we paid for because, it turns out, neither of us speak German. To reach the castle you walk 1.3km downhill through pleasant beech forest until you come out in the valley and the castle is revealed. 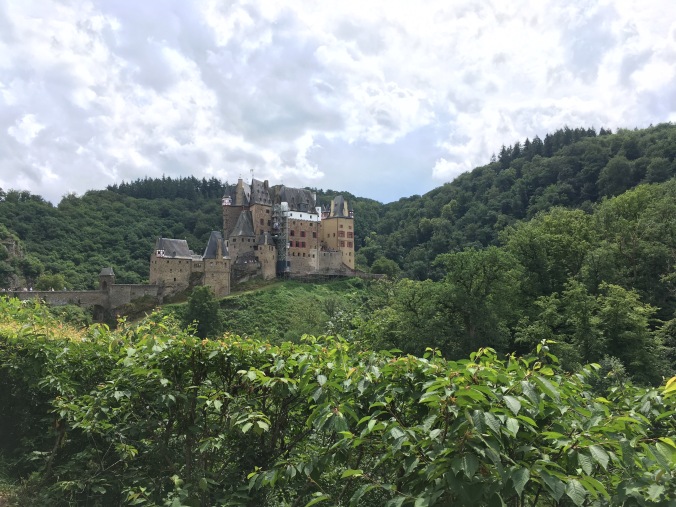 It does have a rather delightful Disney like aspect to it, only ever so slightly marred by scaffolding currently. We joined the numerous other tourists strolling around the base of the castle but decided not to pay to go in. The word “burg” comes up a lot in German place names so we had a google to find out what it actually means: “An ancient or medieval fortress or walled town”, according to the online Oxford English Dictionary (#educatinglivi). 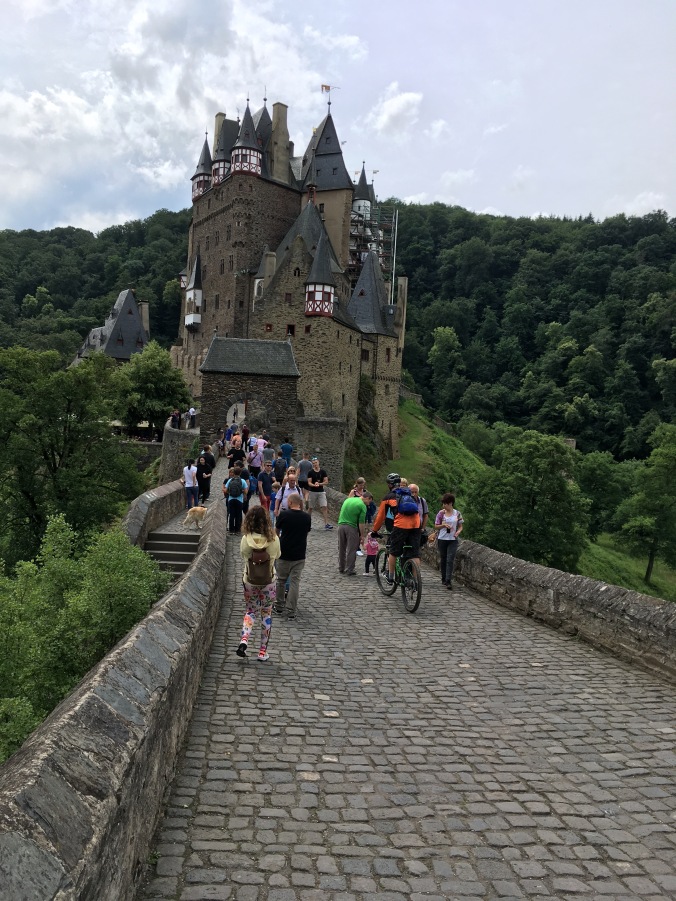 You can walk back up to the car park on the tarmac road, forming a loop, but we decided to retrace our steps through the more attractive forest. We were glad that our fitness hadn’t deteriorated too much and that the gradual uphill climb didn’t puff us out but it did prove too much for James’s flip flop, which broke halfway up and he was forced to climb the rest of the way back shoeless. 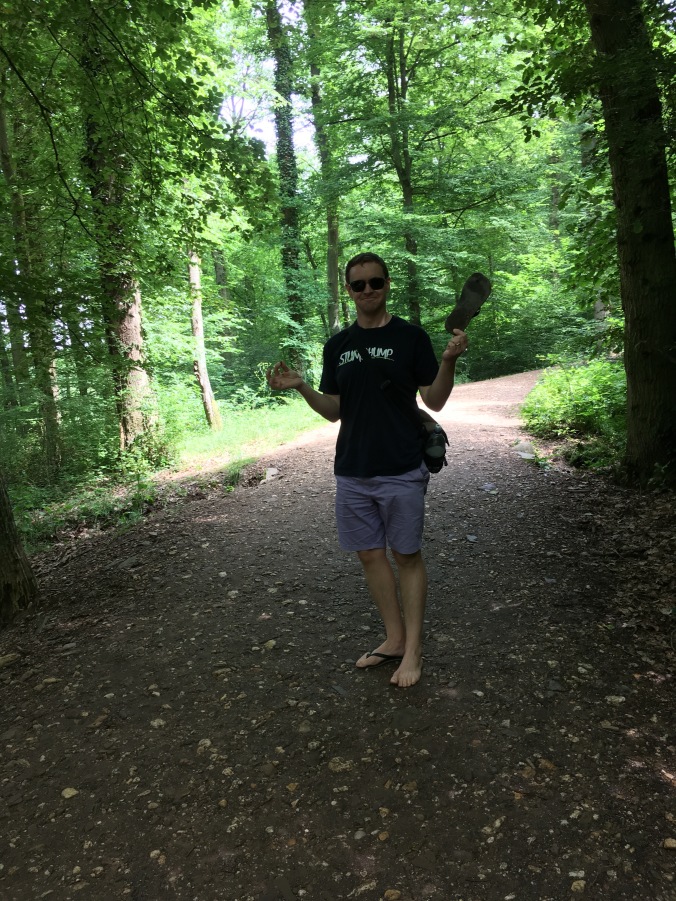 Our next port of call was a drive, rather than a specific site, down the Rhine valley. It was spectacular. The weather was closing in a bit but that only made the views more dramatic. 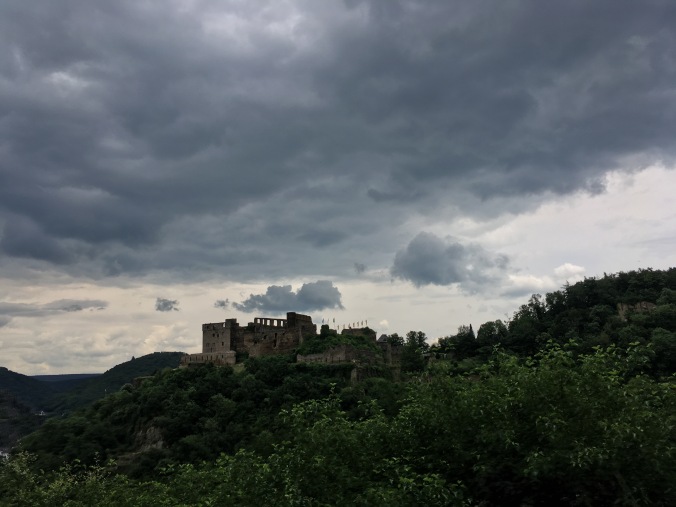 One of our favourite places en route was the picture-perfect riverside town of Sankt Goar, which appeared to be very popular as the restaurants that lined the street were full. 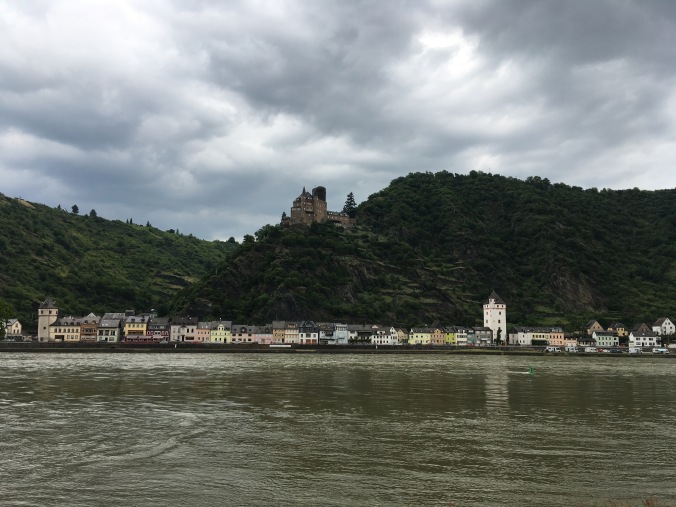 We hadn’t realised that our route actually required us to cross the river shortly after Sankt Goar, which could mean only one thing; impromptu car ferry! 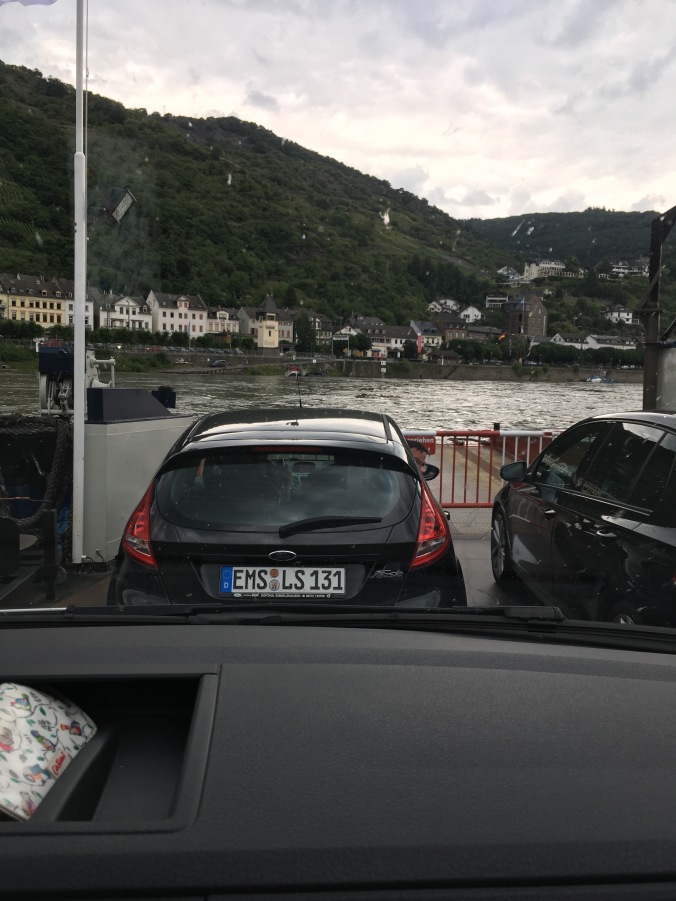 We have concluded that Park4Night isn’t in the same league as the fantastic Campermate app that we had used in New Zealand and Caro had a bit of a fight with it but did eventually find us somewhere to stay and we motored on to Würzburg. Something that we learned very early on is that Maps.me is very ambitious when it comes to travel times. It basically always assumes that you will drive at the maximum speed and when it comes to German motorways there often isn’t one or it is very fast so, short of teleporting, there is no way you are going to make it in the time advised. On this particular evening it took us twice as long as maps.me had said. Not for the first time on this world trip, we found ourselves camping in a car park, although it was a marked improvement not to be in a tent this time. We fannied around a bit getting set up so that we had the best view of the nearby factory and then achieved a truly hideous pair of flip flops for James. 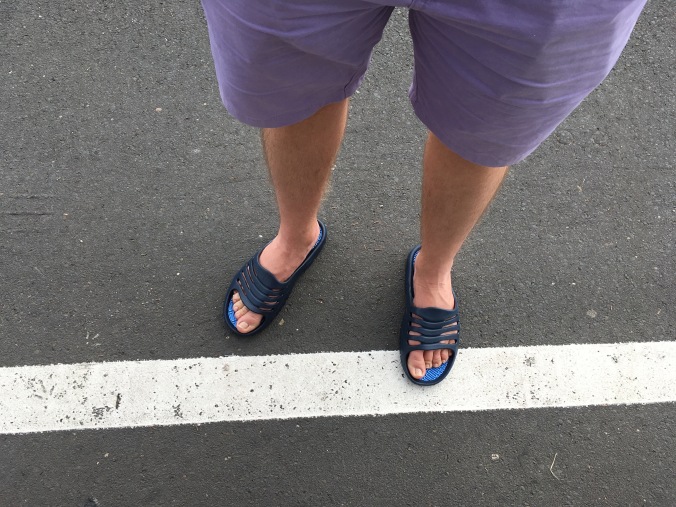 At the time of writing these are still his primary footwear. Our walk to and from the supermarket did allow us to see a tiny bit more of Würzberg and the path along the Main riverbank was really quite lovely and populated by what Lonely Planet always refers to as “shyly courting couples”. 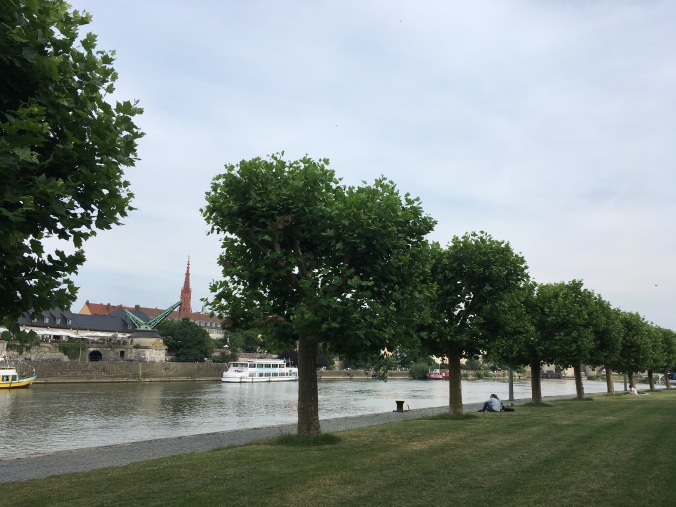 We confess that, as it was simply a place to stop for the night, we didn’t see any of the art or architecture or taste the wine that the town is known for. We had a quiet evening in our carpark, or at least as quiet as possible when you are parked under a bridge, followed by an early night ready for a foray in to the Czech Republic the next day. 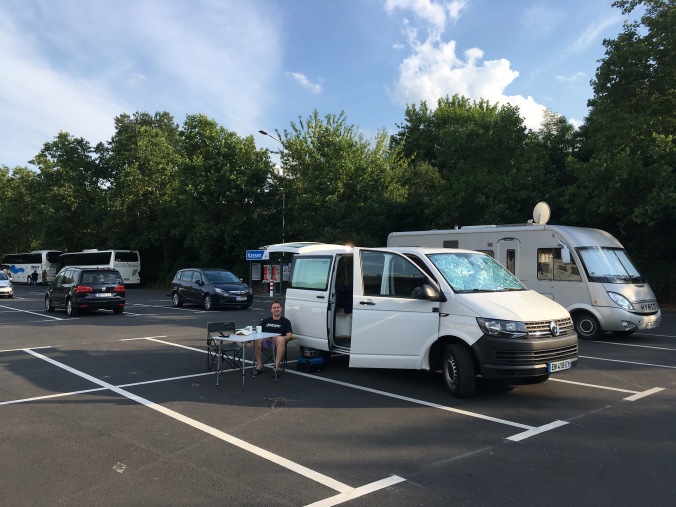 2 thoughts on “The start of our European tour”