We’d stayed still for all of 12 hours so it was definitely time to move again and we were up with the sparrows on the Tuesday morning following the Bank holiday to fly to Nice and Caro’s parents’ house. This too was a pit-stop on the way to Italy for Caro’s brother’s wedding and on Thursday morning the four of us piled in to the car for a 6-hour road trip to Tuscany.

Six hours turned in to eight as we did battle with traffic but, on the plus side, we did stop for our first pizza and beer at a service station about an hour over the Italian border. It wasn’t half bad either. 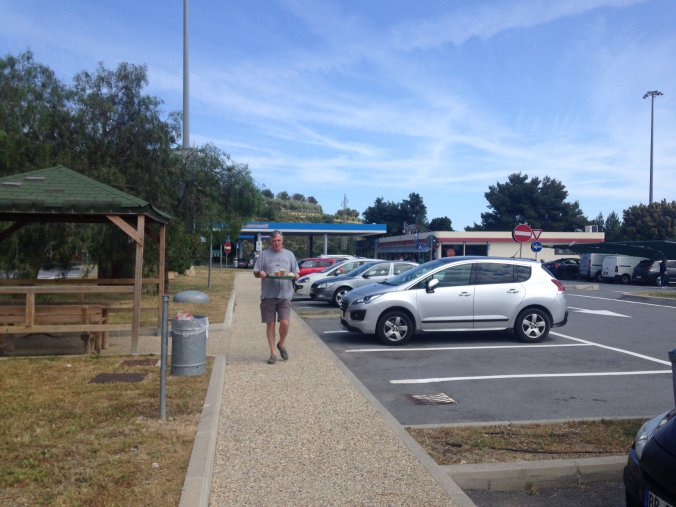 We made it to Volterra just before sunset and went in to town for dinner and drinks with Craig and Erica, who had arrived shortly before us. The following day we had a bit of time to explore the town and, putting our traveller hats on again, we marched up the hill from the hotel to poke around. Volterra is a beautiful town perched on a hilltop overlooking the stunning Tuscan scenery.

We wandered around the streets admiring the meticulously maintained buildings, hunting down salt and pepper shakers to add to our collection and stumbling across the odd Roman ruin, as you do.

We met up with Craig and Erica for lunch and enjoyed some excellent pasta in the sunshine, washed down nicely with a few beers. After lunch and a couple of small dramas (don’t ask us why we know, but there are no currency exchange facilities in Volterra) it was time to check in to the Villa which would be our home for the next few days and the venue for the wedding. We were not disappointed.

The two days prior to the wedding were pretty much a constant cycle of eating, drinking, sleeping and all of the cooking, washing up and more drinking that comes with a house of 37 people in the mood for a party. The wedding itself was an absolutely beautiful, wonderfully happy occasion in a stunning setting.

Because we were having such a great time we failed to get a good picture of the bride and groom on the day, but we do have one of them enjoying the dance floor.

And one of Caro enjoying the dance floor.

Sadly, there are no pictures of her teaching her uncle the dance to Gangnam Style with many enthusiastic demonstrations. James, to use his words, partied hard. He decided to drink with both of the Mrs Aldridges until 8am the following day before joining the newest Mrs Aldridge in a morning dip in the pool before finally going to bed. The end result was that he went from looking like this the night before:

To this at about midday the day after 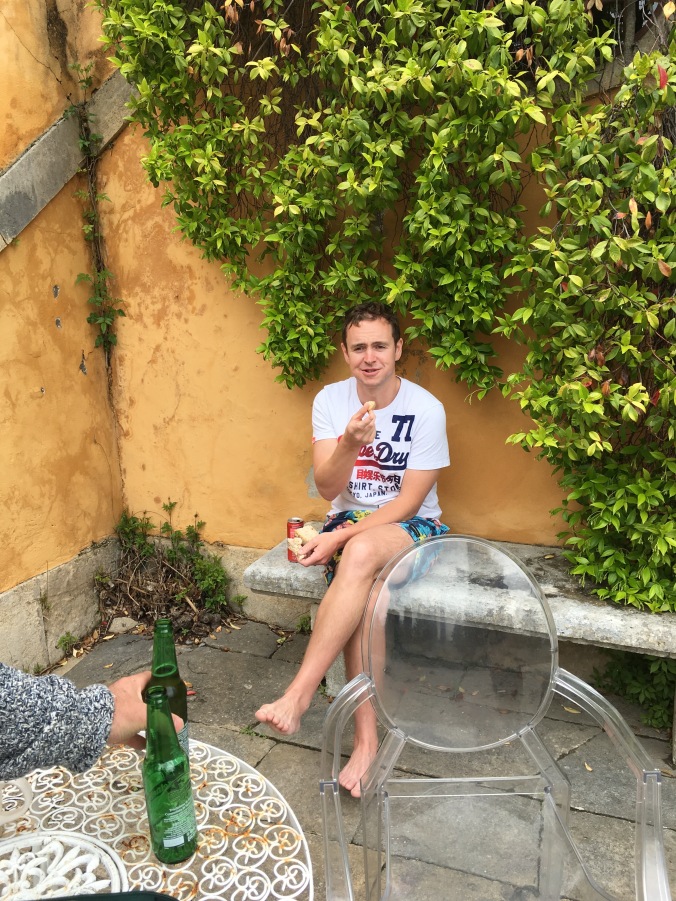 After the fun and exhaustion of 4 days of celebrating we were looking forward to a bit of a break but first we had planned to spend a few days exploring more of Tuscany with Caro’s parents. Our first stop was Montepulciano another hilltop Tuscan town, equally as beautiful as Volterra, although decidedly chilly on the day that we visited. The main square was particularly lovely and we spent an enjoyable half an hour playing with the models in a Di Vinci exhibition before heading out of town to the agriturismo at which we were staying that night.

Other guests from the wedding were also spending some time exploring the area and that evening we met with some of our readers, GST (Gary, Sarah and their adorable dog Tanya who travels with them) for an excellent dinner in Monticello. The village itself is an absolute hidden gem of a place, gorgeous stone streets with perfectly proportioned tiny town houses. We vowed to spend more time there in the future. 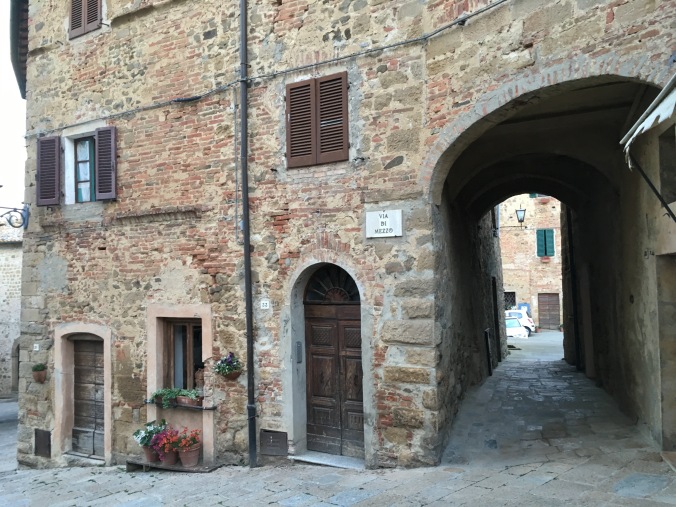 The meal was sensational. The food and service in Osteria La Porta were outstanding and all for a ridiculously low price. We would wholeheartedly recommend eating there, just remember to book well in advance as it was heaving on the Tuesday evening that we visited and high season hadn’t even started yet. 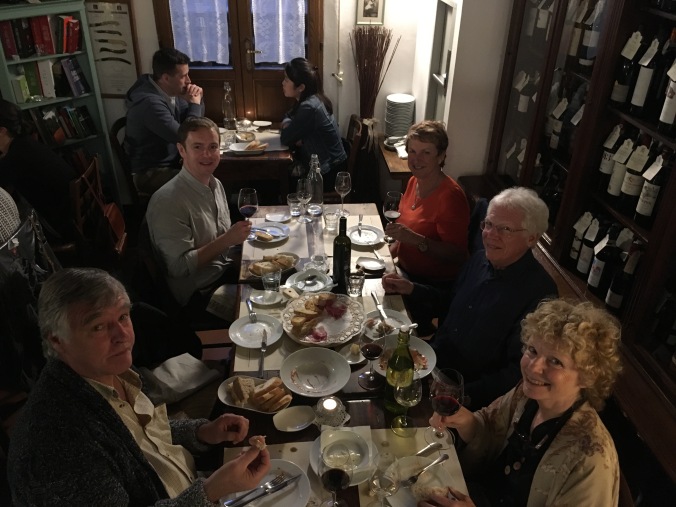 The next day, feeling a little more rested, we headed for a whistle stop tour of Florence. We eventually found our hotel after a small satnav mishap which took us nearly in to the Palazzo Vecchio, a heavily populated pedestrian area. Caro’s mum pulled off some spectacular parking at the hotel and we set off for a quick tour of the city and some lunch before our booking at the Accademia, where we were all eager to see the David. We achieved a fair bit of Florence in a very short time, starting with a stroll past the Uffizi and along the river to the Ponte Vecchio, where Caro and her dad indulged in gelato.

We stopped for a quick peak at the Duomo.

And we wrapped the tour up with the main event; the David.

That evening we ate in the food court above the city centre market. Don’t be fooled by the name, this is a food court like no other. Around the edge of the giant room are loads of different stalls cooking up an array of enticing food. We had excellent seafood, mouth-watering steak, and topped it all off with some excellent gelato.

The next day we did a quick spin around the markets before hitting the road back to France and the comforts of Caro’s parents’ building site. Never ones to forgo a meal, we stopped en route for some lunch on the Italian Riviera town of Portofino. It is one of those picture-perfect towns, with the water and the boats and the flowers everywhere, but beyond the look of the place we didn’t find much to shout about in Portofino so moved on swiftly after lunch.

Our final stop on the way home was at Decathlon so that James could buy some speedos because, apparently, they were compulsory attire for a stag do in Munich that he was leaving for the next day. Given that James was about to drink his bodyweight again, the first and only priority when we got home was sleep. Caro deposited James at the airport the following day and had a day or two of quiet before her friend Emma arrived for a couple of days relaxation. That’s what we sold to her, but there is an unwritten rule at the Aldridge family building site that you work for bed and board. So before any relaxation could occur, there was insulation to be laid.

James arrived back in France, a shadow of a man sporting an unpleasant mustard yellow gilet, and the usual pursuits of split level croquet and boules ensued. (We actually believe that there is rare evidence of Caro’s dad cheating in the second photo. The evidence would be rare; the cheating is prolific.) 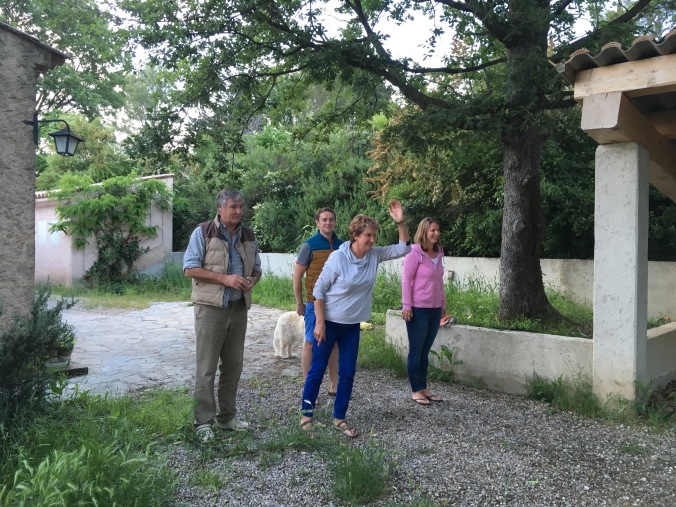 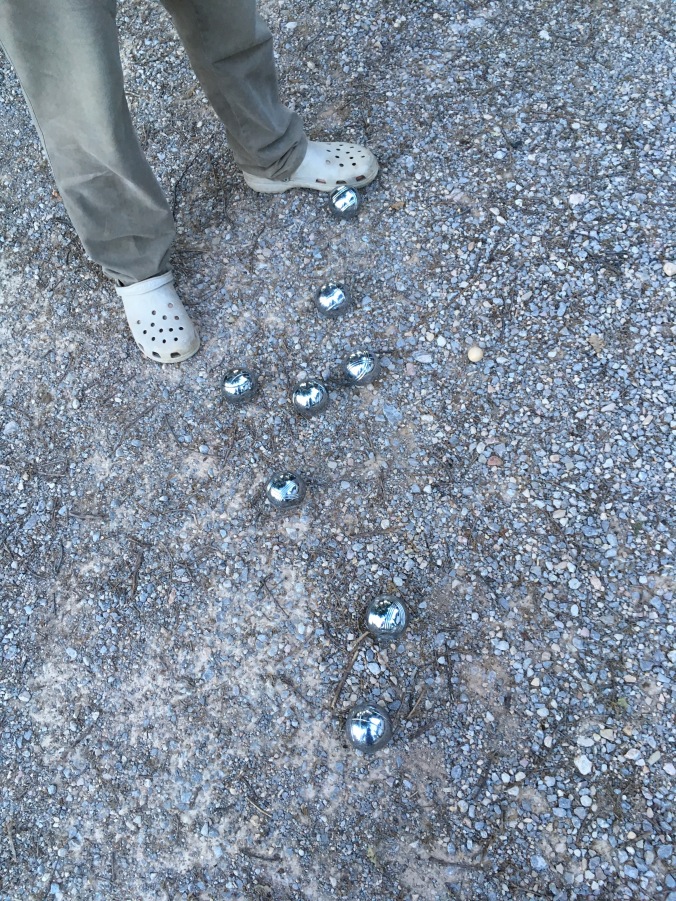 We returned to the UK in time to help James’s godfather at Hertfordshire County Show where we have served burgers for the past few years along with the rest of James’s family.

The littlest helper was a bit knackered out by all of the excitement which meant more cuddles for Uncle Dragon. 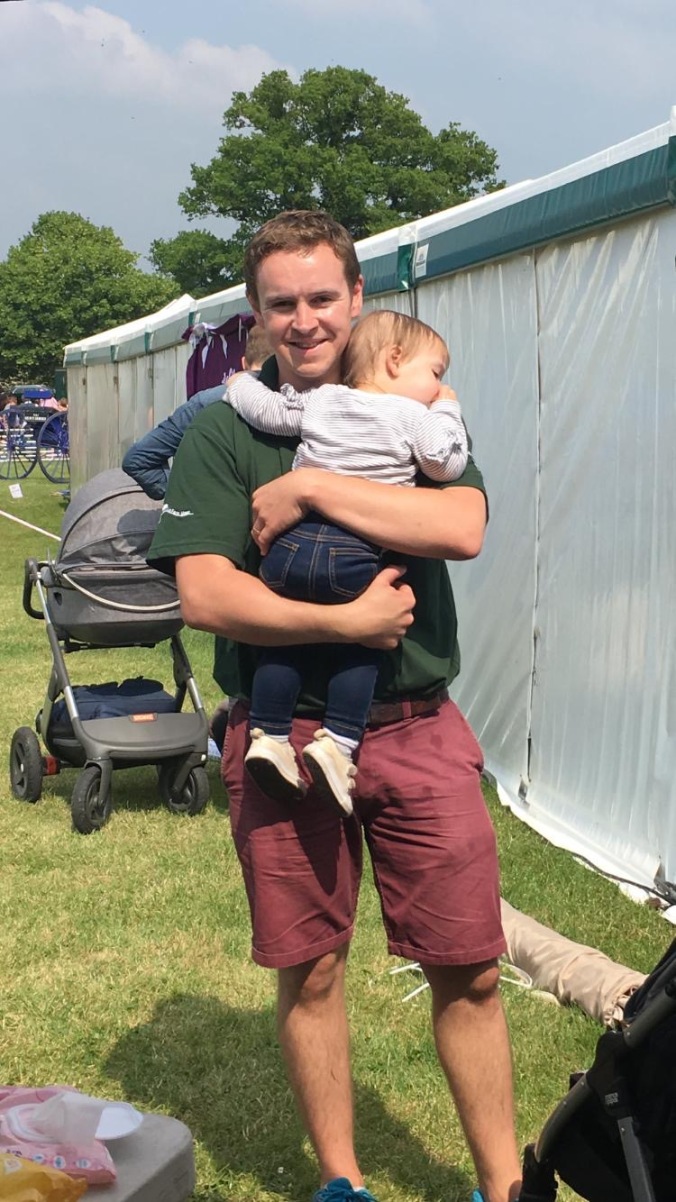 The show was a huge success and we drove back to Suffolk on Monday morning, making a quick stop at the Rumburgh Buck on the way home.

We had another ten days left in the country, although this timeline was rather arbitrary because we didn’t have any flights booked for the next leg of the journey. We had originally settled on Canada for 7 weeks campervanning across the country, but it turns out that Canada is eye-wateringly expensive  over the summer (especially last minute) and we could not justify the expense. So, in between a 30th birthday barbeque in Southampton and final catch ups with friends in London, we made a vague plan for the next 12 months. Unexpectedly, the summer months have been the most challenging for us to plan. Large swathes of Asia were out of the question either due to extreme heat or extreme wet, South America would be in winter and Canada and America just too expensive. As we hadn’t planned to include Europe in our trip we were slightly stumped as to what to do with ourselves. Here’s a tip that no one but us needed; plan ahead ever so slightly.

We realised that if we juggled the countries right, we could head back to Asia in late July / early August and avoid the worst of the weather. We were left with 6 weeks in June and July to figure out and we finally decided to rent a campervan and drive around Eastern Europe before flying out to Malaysia. Decision made, we achieved Eurostar tickets, purchased an enormous map of Europe and a Europe Lonely Planet and Caro dug out her highlighters again. On our last night in the UK we celebrated fathers’ day and James’s dad’s birthday a few days early over a Chinese with the whole family. Then it was time for goodbyes and, of course, some final cuddles to last us until November.

One thought on ““A sabbatical from our sabbatical” – Part 2: France, Italy, Germany, France again and back to England”