We have had our fair share of challenging journeys but the bus journey from Bardia to Kathmandu was probably James’s least favourite of them all. There was the simple fact that it took 20 hours and that alone made it quite unappealing. This, combined with the extensive roadworks and appalling Nepali driving, made for a fairly stressful journey throughout which James feared for our lives at every turn. Caro was much more contented and did manage to get some sleep during the night but it is fair to say that we were both very relieved to stumble off the bus at 1pm the following day. (Our decision not to take the overnight bus to Varanassi, which had been one of our potential routes back in to India, seemed all the more sensible.)

As we only had two nights in Kathmandu before flying off again we decided to stay at a different hotel, this time in the middle of Thamel. Having haggled a decent price for a taxi we crawled through Kathmandu traffic to Kathmandu Tourist Home. We had been out in the sticks for the past two weeks so we were really struck by the volume of traffic and the pollution of Kathmandu, far more so than we had been on our first visit there. We spent a majority of the afternoon relaxing in our room and scrubbing off 20 hours of bus grime. We did venture out in search of some food and returned to Green Organic Café in search of the excellent momo we’d enjoyed on our first visit to Kathmandu. Fortunately, they were as good as we remembered.

We had eaten lunch pretty late and were going to give dinner a miss but James was feeling greedy and a couple of hours later we were back on the streets of Thamel in search of another meal. In our first 7 months of travelling we have learned that we need to do our research and have one or two restaurants in mind before we go in search of food because we are both spectacularly bad at making decisions. We failed to take our own advice and ended up wandering aimlessly for an hour or so, the upshot being that we did get to experience the Nepali New Year’s Eve celebrations, which were in full swing. We also made a short detour to the Irish Bar. 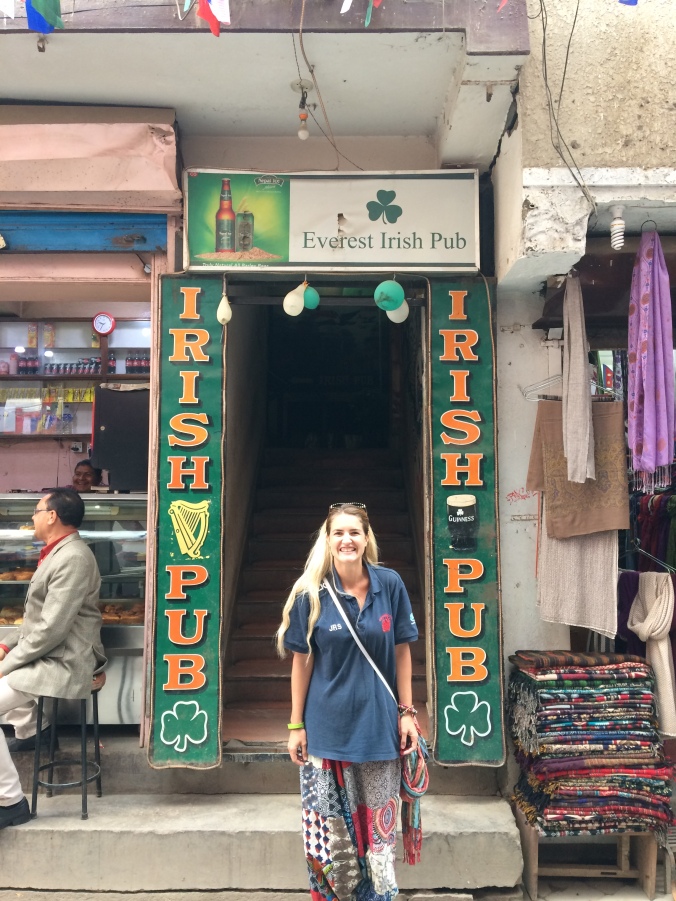 We ended up eating at a place practically next door to our hotel. The restaurant at Hotel Holy Lodge was more of an outdoor lobby than a restaurant but served the most delicious local food, including some buffalo momo which were absolutely superb. 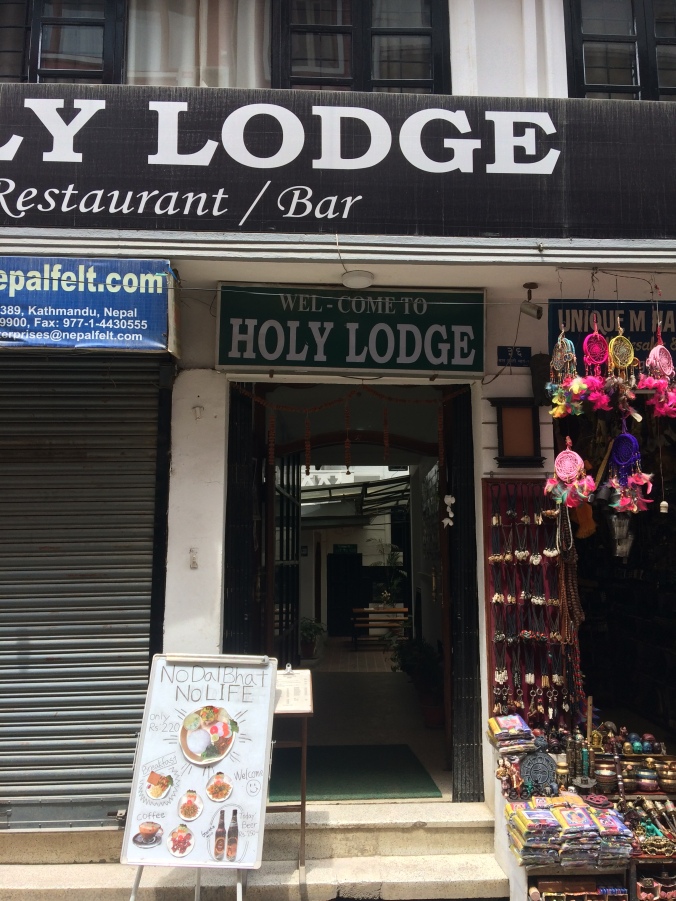 The next day we had a leisurely start to the day before heading out to take in a few more of Kathmandu’s sights. Our first stop was the Garden of Dreams, which is a short walk from Thamel, past some of the more authentic looking hiking shops in Kathmandu. It was a hazy, muggy morning and felt to be working up to be a scorching hot day so stepping through the gates to the Garden of Dreams was truly like walking in to an oasis, the noise of the surrounding roads fading away. It was a national holiday and so probably a bit busier than usual but we imagine that it is always a fairly popular spot.

The gardens themselves are beautifully maintained and were in full flower on our visit. Hidden statues and fountains make for an entertaining half an hour strolling around and, had we thought to bring our books, we could happily have sat and read for a couple of hours in the relative calm. Some of the buildings surrounding the garden are still awaiting repair following the earthquake and make for a stark contrast to the immaculate gardens that they shelter.

A phenomenal restoration programme was funded by the Austrian government after the gardens fell in to a disrepair and, whilst the restoration has been beautifully carried out, it is essential that you stick your head in to the small museum on site which houses photographs of the garden in its previous splendour. What remains today is just half the size of the original and the photographs will make you dearly wish that you could have seen it in its heyday. 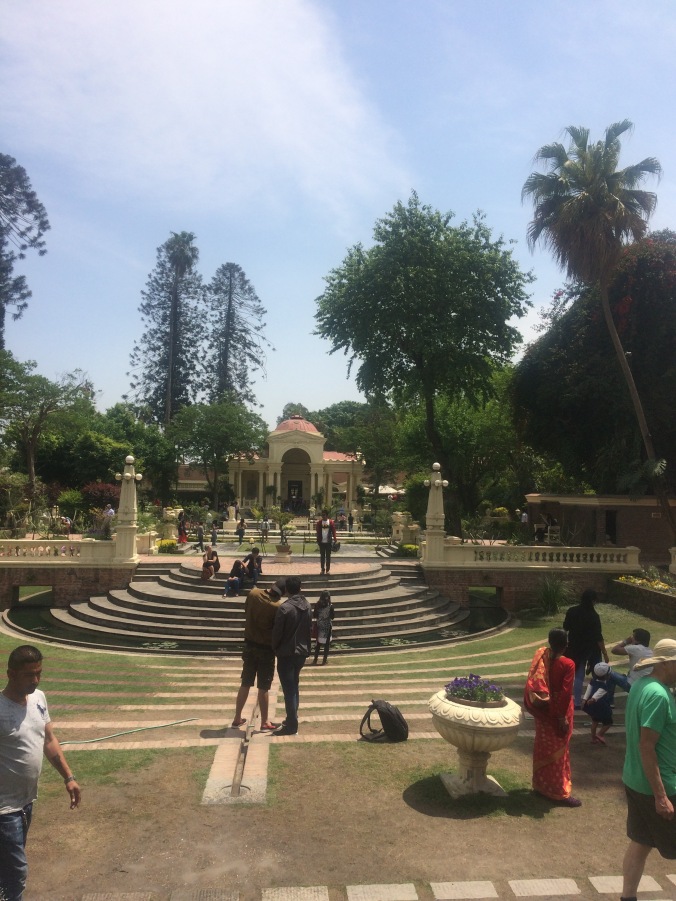 Having taken in the gardens we ventured around the corner to the Kaiser Library, which is said to house a collection of antique globes which we were unreasonably excited to see. Unfortunately, the library was closed for Nepali New Year so we had to make do with the exterior which is sadly in need of a bit of care and attention. 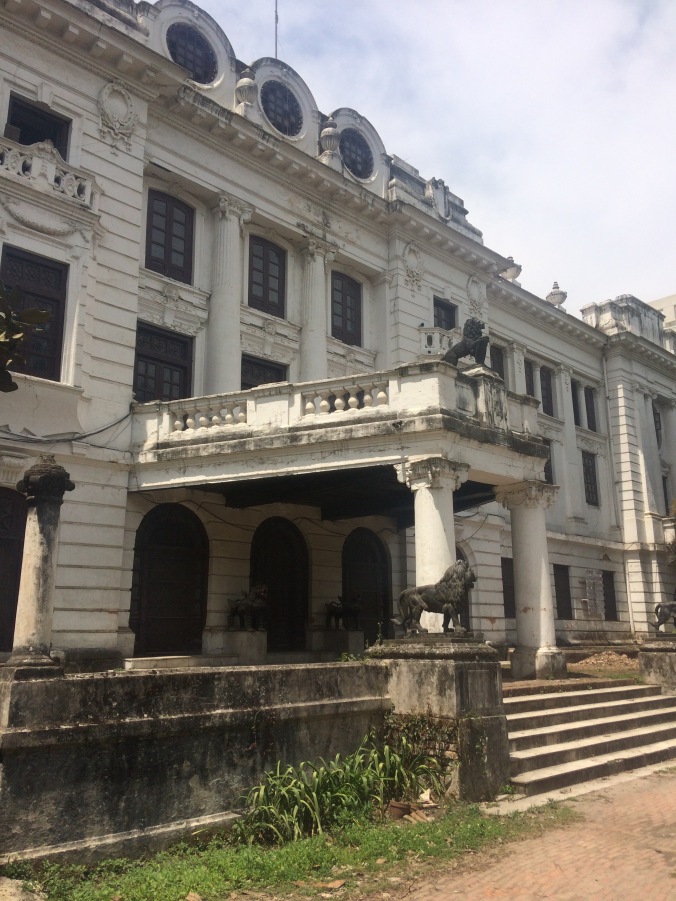 The final item on our agenda was a Kathmandu essential; Monkey Temple, or Swayambhunath. We were advised that it is best to visit at sunrise or sunset and, having no desire to get up earlier than necessary, we made our way there in the late afternoon. It had been a fairly leisurely day so we decided to walk to the temple rather than get a taxi. Walking took us off the beaten track slightly and through the more residential areas of Kathmandu. This taste of the authentic did mean that the standard in cleanliness did drop somewhat and the roads were in noticeably poorer states of repair, although it was still significantly better than many other cities that we have visited. Crossing the Bishnumati River we were saddened to see the waterway practically brought to a standstill by an abundance of litter and were assaulted by a reek of stagnant water that made us hurry to the far side and the bottom of the steps that lead up to the base of the temple staircase. We aren’t sure how many steps we climbed but if you have a moderate level of fitness then you will have no problem whatsoever making your way there on foot, however, you won’t be missing out on a huge amount if you do want to get a taxi.

The temple comes complete with the usual compliment of tat sellers found at major tourist attractions and the steps themselves were heaving with people, which made it a bit challenging to appreciate the eclectic collection of statues lining the staircase.

Naturally there were hundreds of monkeys which James, based on his previous traumatic experiences, gave a wide berth. 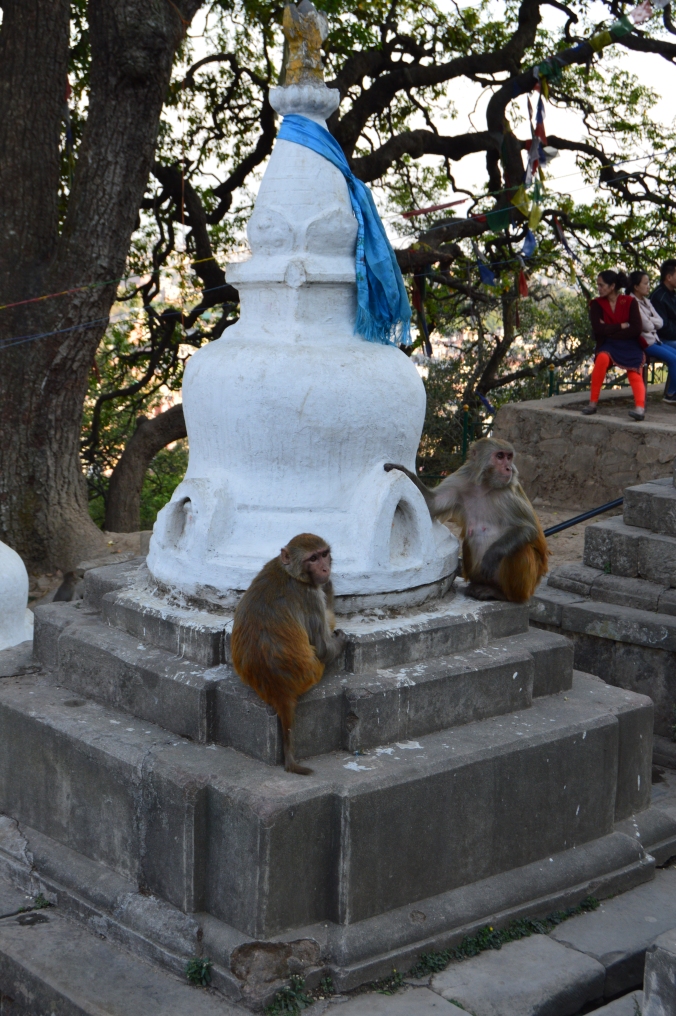 Whilst the walk to the base of the temple had been easy, the steps up to it can leaving you gasping as they are very, very steep. Caro was already dreading having to negotiate her way back down.

It is absolutely worth the climb; the temple is gorgeous. We were glad we had heeded the advice and arrived later in the day because the light was perfect.

The prayer wheels that line the bottom of the temple are in almost constant motion as streams of people make their way around the temple, always in a clockwise direction, their hands outstretched to spin the wheels, the bottom halves of which have been polished to a shine by the touch of millions of hands. 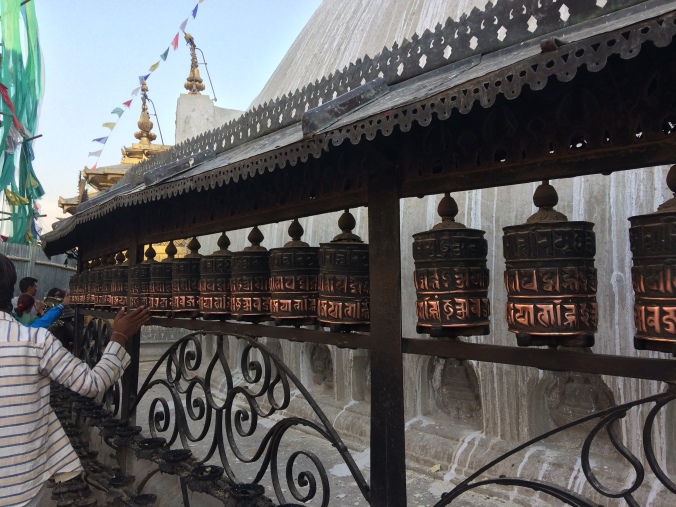 There isn’t the serenity that ordinarily comes with temples, there are hundreds of people and the area is full of souvenir shops touting their wares.

As with almost everywhere in Kathmandu, the earthquake damage is significant and repairs are still ongoing. It doesn’t matter though, because the view over Kathmandu is absolutely wonderful.

If we are being perfectly honest, we didn’t actually stay to watch the sunset because Caro was terrified of trying to get down the steps after dark. Instead, we left just a bit earlier and retraced our walk to Thamel in search of an early dinner before travelling the next day. Fortunately, this time, we had planned ahead and were determined to visit Thamel House, where TripAdvisor and Lonely Planet both assured us we would be served delicious Nepali food. We opted for a set menu so that we would get a bit of everything and were treated to an excellent meal, although you can definitely give the complimentary local shot a miss. 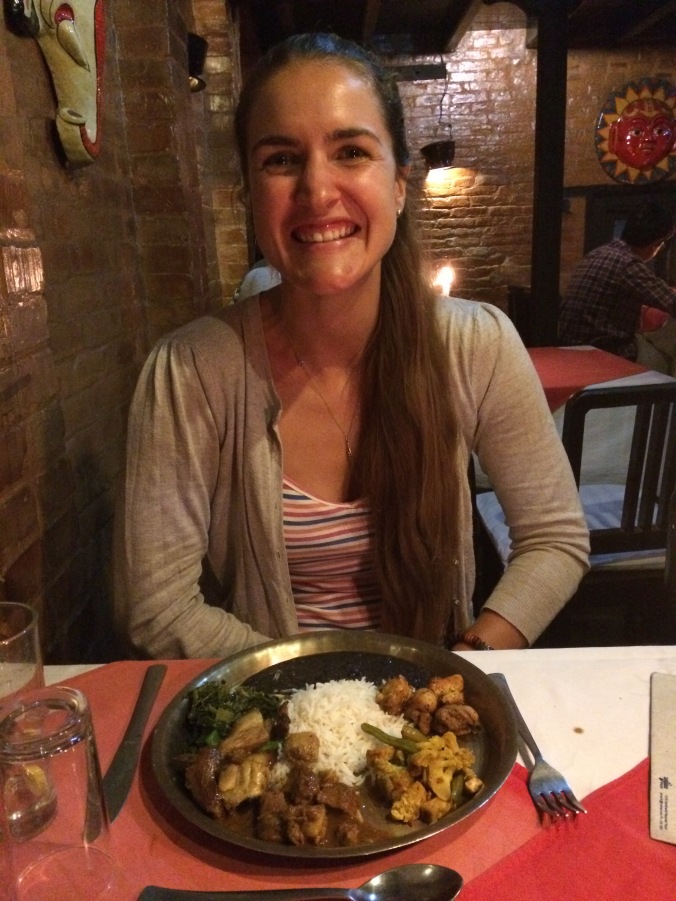 As we were nearing the end of the first leg of our trip we were determined to shed as much stuff as possible, firstly because every item of clothing that we own was completely buggered and secondly because we needed room for the salt and pepper shakers, diaries and terrible tat gifts that we have accumulated over the past 7 months. As we were heading back to toasty India it was time to jettison our long-suffering hoodies without which we would almost certainly have expired.

We still had a couple of hours to kill before our flight so we decided to go to the Blueberry Kitchen for a leisurely breakfast, another Trip Advisor recommendation. After several excellent coffees, we headed off to the terrible but delightfully retro Kathmandu Airport. It wasn’t a particularly enjoyable experience as the place was very crowded and there is absolutely nothing to do there but we didn’t feel it lived up to its reputation as one of the worst airports in the world. Fortunately, our flight out of Nepal was much smoother than our entrance and for that we were both exceptionally grateful.

Nepal is an absolutely gorgeous country full of astonishing sights and beautiful, warm, resilient people. We both had the most amazing time there and will definitely be back to do some more trekking, raft some more rapids, and, most importantly, eat more momo!