Due to James being unwell we had to push our plans back a day and, for once, we had planned more than a week in advance so it took a bit of ringing around to get everything sorted. Everyone that we have come across in Nepal has been so friendly and accommodating, so last minute changes were made without the slightest issue and when we did eventually arrive everyone was primarily concerned to know if James was feeling better. Which he was and, after a day’s rest, it was finally time to leave our temporary home of Pokhara.

There are two main options for travelling around Nepal: plane or bus. Nepali airlines have a safety record which could be described as dubious at best and the weather is so unpredictable that you may end up grounded for hours so your journey takes as long as a bus anyway. So we took the bus, which, whilst being the safer of the two options can still be a terrifying experience. We took the cheapest tourist option so we had individual booked seats and the occasional blast of air conditioning. The other advertised features such as TV and WiFi were not in existence but this was not our first bus journey so this came as no surprise to us whatsoever.

Within half an hour of leaving Pokhara we had passed an overturned bus and this did little to calm James’s nerves as we approached one of the most notoriously dangerous roads in Nepal, the Narayanghat – Mugling Road. The road is currently undergoing significant roadworks, ostensibly to make it safer but during the construction period it just makes it slow as well as dangerous, a winning combination. This meant that it took us 8 hours to wind our way along the mountainside to Sauraha, a village on the border of Chitwan National Park and the main entry point in to the park. We had already booked our safaris and were met by Doma from Nepal Dynamic Eco Tours at the bus station. This was fortunate because, although our hotel provided a free transfer they failed to consider that every single person would have luggage and our seats in the jeep were occupied by other people’s backpacks. Doma gave us a lift back to the office where we finalised our plans for the next few days.

We chose Nepal Dynamic Eco Tours partly because they had excellent reviews on Trip Advisor and in Lonely Planet but mostly because they were the only company we could find that did not offer, and in fact actively discouraged, elephant safaris. Yep, we’re going to bash on that drum again, if you do plan a visit to Chitwan please please please give this or other like minded companies your business. Doma and her brother are lovely people who have a passion for conservation and wildlife which is made all the more admirable by the fact that they lost their mother to a rhino attack.

Once we had confirmed our plans Doma took us out for a short walk along the riverbank. The Rapti River forms the National Park boundary and animals will frequently cross over to the village side. Within minutes we were treated to our first sighting of an Asian one horned rhino, grazing casually along the village side bank of the river. It was a pretty cool start to our visit to Chitwan.

It turns out that this particular rhino is there most days, she is one of a number of orphans who were swept away in a flood, rescued and brought back to the park. This human contact, although minimal, means that she is comfortable being in close proximity to people. Further along the path we met another of the rescued rhinos, this time a much younger male which was accompanied by a ranger. As he is still so young he will be taken to a safe shelter each evening until he is old enough to fend for himself. Despite being well over 100kg he was pretty damn cute.

The river was teeming with crocs. We saw several of the fairly common Mugger crocodiles but also the severely endangered Gharial crocodile which can only be found in Nepal and India . By the end of our visit James worked out that we had seen more than 2% of the entire global population. 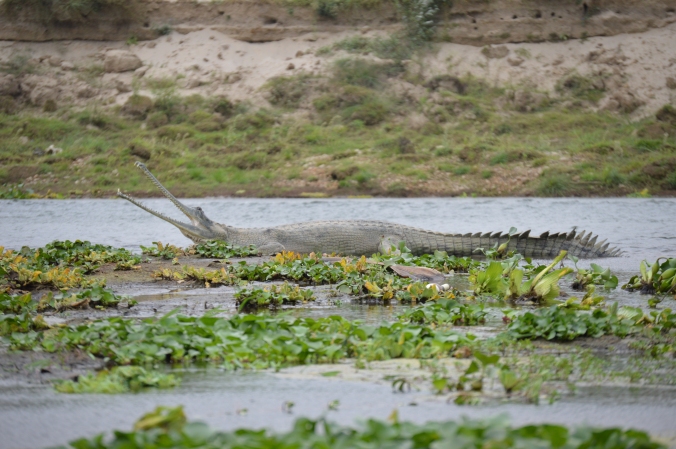 By the time we had finished our walk it was most definitely time for a shower and we hopped in to a tuk tuk to our hotel. We had booked to stay at the Tree Tops Hotel which was definitely at the lower end of the available hotels but met all of our needs. It was clean, the shower was hot and the staff were extremely helpful. There was also a small on site restaurant which did reasonable food at all hours of the day. Having everything on site and being a tuk tuk journey away from town meant that we did not really venture in to Sauraha itself but from our brief trips through the town it was the same as many tourist towns that cater to national parks; lots of opportunities to buy tat.

The following morning we were booked in for a full day jeep safari so rather than splitting the day in to two drives like we were used to, we were going to be in the park for a good 10 hours straight. At 6.30am we were rowed across the river on a slightly ropey looking canoe with a few crocs watching us from banks.

We meet our jeep on the far bank, where they are kept during the dry season, and set off in to the park. Chitwan is a mixture of Sal forest, Riverine forest and grassland, with Sal forest covering up to 70% of the total area. So first we headed in to the Sal forest and within a few minutes James spotted the bottom of a Sloth bear disappearing around the corner and off in to the woodland. Unfortunately that was the last we saw of the shy fella.

We made a brief stop to seek out the source of an ominous rattling noise which was increasing in volume and most likely scaring off every living creature within 30 kilometres of us. Once the truck’s leaf spring had been tied back together with the drivers belt we moved on and saw a herd of Gaur or Indian Bison. They are an extremely odd looking animal but are best decribed as a cross between a cow and an antelope.

The park is home to a large number of Deer (or tiger food) and we saw many as we drove around, but unfortunately we saw no sign of the tigers trying to eat them. Our main purpose in visiting Chitwan was to see rhino and we saw these in abundance which was fantastic and made our trip very worthwhile. We have included pictures of a couple of our interactions rather than write about them extensively. What we will say is that they are awesome. 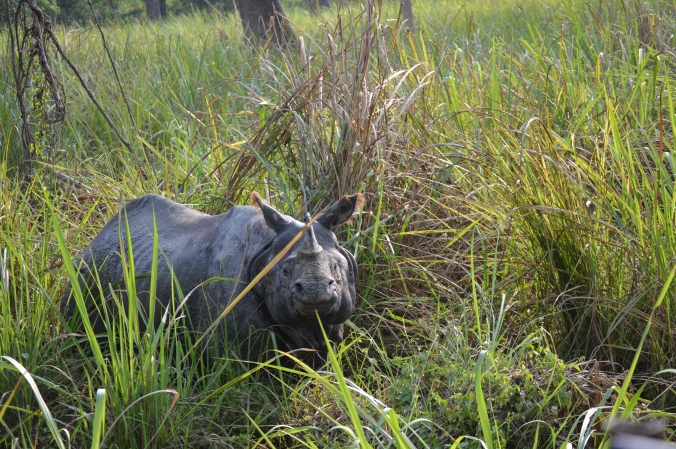 The next day we arrived at the river and boarded a very wobbly canoe of our own for a two hour float along the river. The river was a great way of seeing the crocodiles and extensive bird life up close.

We saw hundreds and hundreds of birds, including various types of our favourite kingfishers.  After 2 hours we pulled up on the river bank and nervously departed on a walking safari through the park. It was a long sweaty day, and we did not see a huge amount, though we did cap off the day passing by two male rhinos facing off, luckily from a safe distance.

Our guides did try hard to find us tiger and we did find some carcasses which had obviously been a previous meal but on balance we would rather have not had that particular experience as they smelled revolting and we had mixed feelings about tramping around a tiger’s dining room. In the end we did not see any tigers and did not get a huge amount of reward from our first walking safari. Caro was fairly adamant that it would be a one off experience. That being said, we really enjoyed the jeep safari, the canoeing and particularly the close rhino interactions. So perhaps not the best spot for tigers but if you want to see one horned rhino Chitwan is a must.