After our snap decision to leave Rajasthan, we dragged ourselves out of bed for a 3am, 3-hour taxi journey to Jaipur airport. Jaipur didn’t have quite the slick operation of Delhi airport and instead had a distinct feel of organised chaos. We thought we knew what gate to go to because our flight numbers matched the one advertised, but the destination did not. It turns out that our plane made a pit-stop at Hyderabad that we didn’t know about, and had to deduce ourselves as it wasn’t communicated anywhere in the airport. In fact, the first time that we knew for sure that we were in the right place was when we landed at Hyderabad and the captain asked passengers for Kochi to remain seated.

We had chosen to head south to Kerala as it is quieter and more laid back than the north, which was exactly what we needed after our first couple of weeks in India. Our first stop, Fort Kochi, certainly ticked the boxes and our sedate trip from the airport, free from boy racers and blaring horns, made for a very welcome change. We checked in to our guesthouse, Veda Wellness Ayuverda and Yoga Centre, escaped the worst heat of the day in the air conditioning and got an early night after our long day of travelling. The next day we set out on a walking tour, making our first stop at the famous Chinese fishing nets which are the iconic picture of the area. 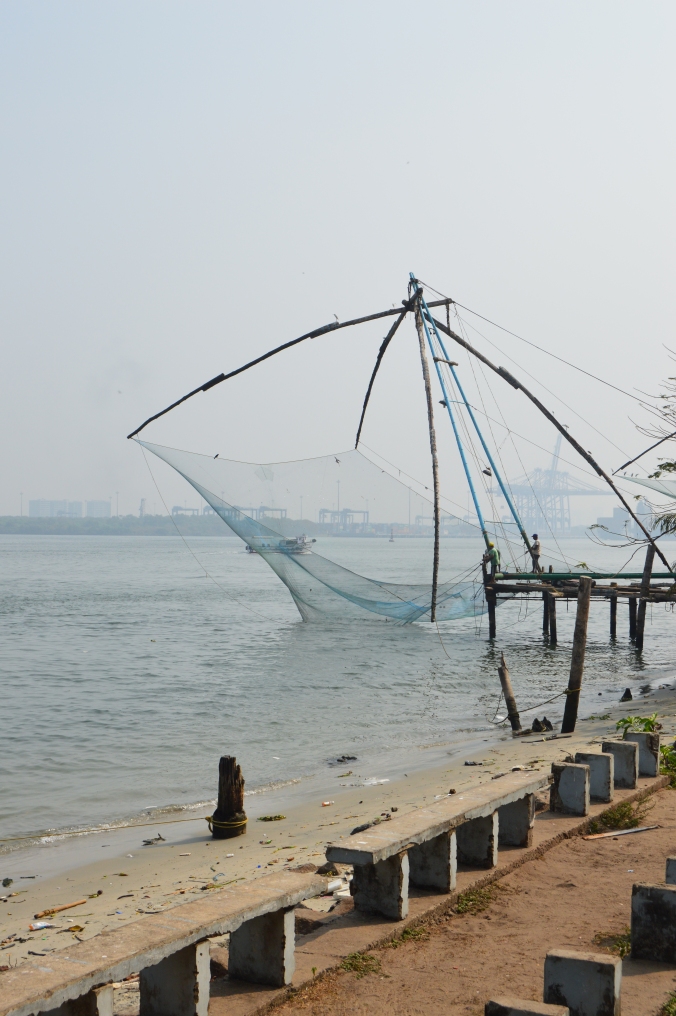 The nets are cool and if you hang around for a few minutes you will be able to watch the fishermen operating them which is a fairly labour intensive process. Unfortunately, the nets are cast off a beach in the middle of a fairly large town and are therefore accompanied by all of the dirt and rubbish that comes along with that location. We found the nets that we passed in the backwaters later much more attractive and in a beautiful natural setting, so wouldn’t recommend Kochi solely for this iconic sight. Along the path behind the nets there is an informal fish market with the fresh catch available for sale. Again, the setting is a bit grimy but actually the fish looked fresh and clean. 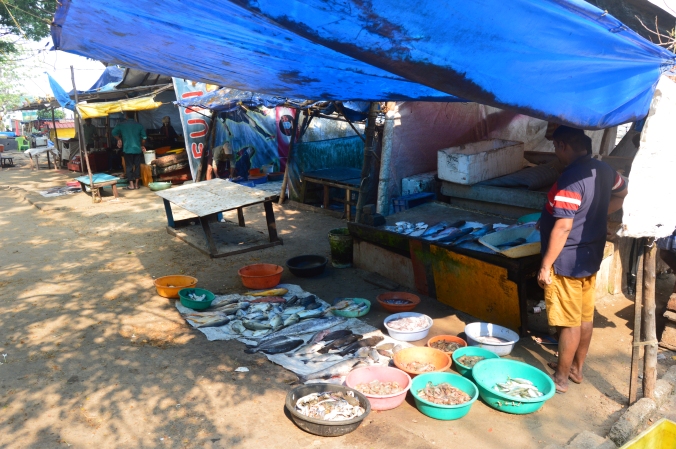 Fort Kochi was occupied by the Portuguese, the Dutch and the English before independence and each left their mark on the area. The Dutch Palace, our next stop, was built by the Portuguese around 1555 and was then renovated and extended by the Dutch in 1663. The Palace is now used as a museum which is well worth a visit. We spent an hour wandering around the exhibits and admiring the wonderful murals. Unfortunately, we do not have many pictures as photography was prohibited in most areas.

This is taken just inside the door but there are two rooms where the walls are completely covered in murals and very helpful and detailed plaques give information about each panel. It was well worth the 5 rupees each that we paid to get in. Further rooms hold a wealth of information about the history of Kochi and particularly about the royal family. It was very interesting but also very warm, despite the fans dotted about the place, so we would advise going early or late in the day.

Our next port of call was Jew Town which we reached by wandering through the spice markets. Unfortunately, as it was Sunday, the spice shops were closed so an area that doubtless would be a hive of an activity was almost eerily calm.  The tourist shops were, of course, open for business and men stood outside every shop calling to us to “just come and look”. 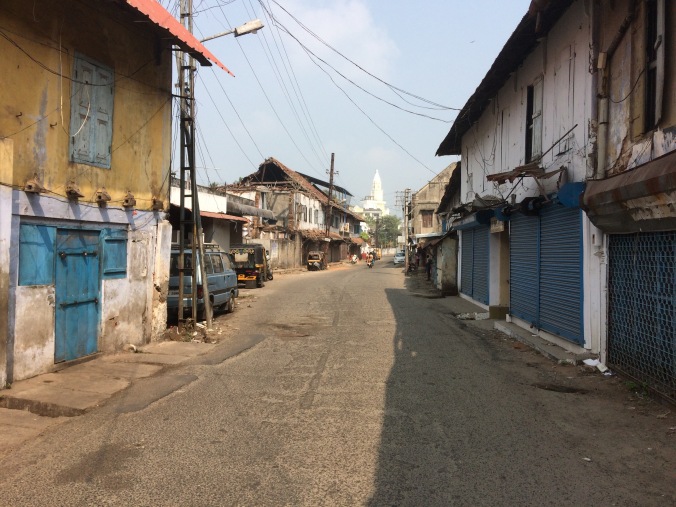 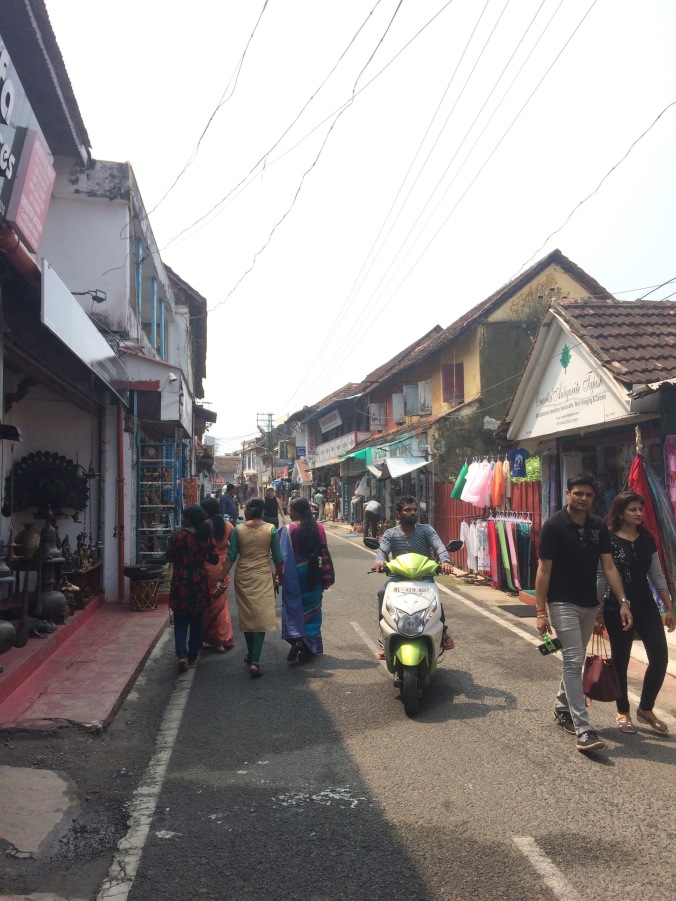 The area had clearly been prosperous and we came across a fair number of grand buildings, now disused and falling in to disrepair.

The highlight of Jew Town is the Paradesi Synagogue which dates from 1568 and is the oldest active synagogue in the commonwealth. How long it will last and its future are both unknown as there are only a handful of Jewish people left in Fort Kochi and they are all in their 90s. For a small fee, you can visit a teeny tiny museum, which explains the history of the Jews in the area, and then you can sit and take in the Synagogue itself which is a very special place, the blue and white floor hand-painted tiles are particularly beautiful.

After an extremely warm and tiring day exploring we went in search of food and decided to head to the Farmers Café, where we enjoyed what was probably our best meal in India. The restaurant itself is clean and airy and the food was delicious, we highly recommend the fisherman’s thali.

The next day we decided to take up the offer of a yoga class at the guesthouse, which took place in the relative cool of the roof terrace but still made for a sweaty start to the day. Fully stretched, we jumped in to a taxi to Alleppey which is at the northernmost point of the famous Kerala backwaters. The ride south took us through many commercial looking towns which seemed continuous from Kochi to Alleppey. We had only planned one night in Allepey as we were keen to escape the towns, and it was a good job we did as the town offered us very little other than a starting point for the backwaters. We did however get to have lunch in a restaurant under a bypass. 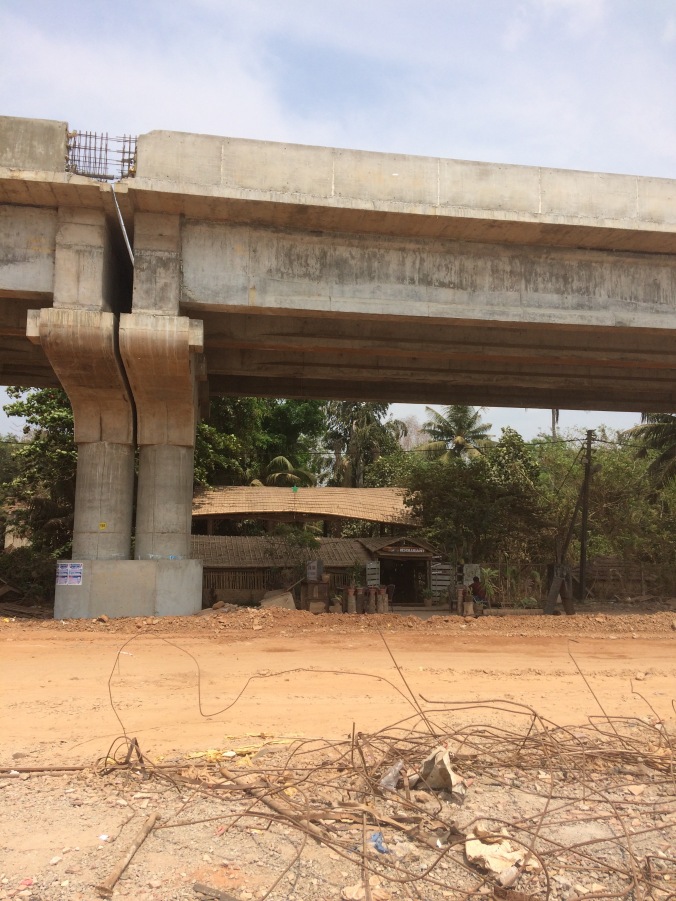 Unfortunately, the already average beach has been made even more unappealing by the building of an enormous bypass along the back of it. This has ruined the view for those businesses with beach front positions and many already appeared to have shut down before we arrived and did not look likely to reopen. After what turned out to be a surprisingly tasty lunch, we visited the lighthouse then retreated back to the cool of our AC.

Instead of investing in a pricey houseboat trip and spending a few nights cruising the backwaters, we decided instead to take the 8-hour ferry to Kollam which took us along similar waterways and served the dual purpose of actually getting us somehere. We took our seats on the top deck of the disturbingly ancient looking boat and watched the world go by as we slowly left the town behind us and headed out through the small villages and fields which line the banks of the waterways. Given that our ferry was built at the same time as the ark, we were unsurprised that there were a couple of engine issues en route and we found ourselves floating aimlessly along the river whilst the crew tried to revive the engine. This was obviously a regular occurence as on both occasions they had it up and running again within 15 minutes.

The cruise was lovely and we passed the time admiring the scenery and wildlife and watching the locals getting on with their day to day lives which included washing, swimming, fishing and, less charmingly, emptying their waste in to the river. 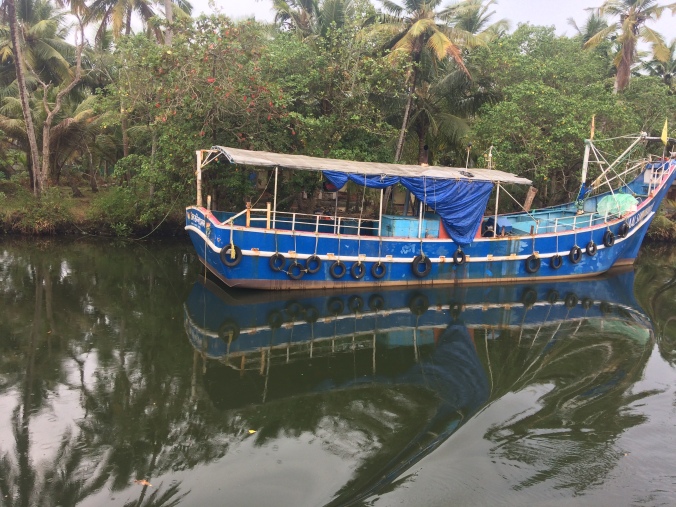 We passed through a lock in to salt water; the waterways widened, the fishing fleet increased in size and the water was filled with creepy looking jellyfish.

It was a shame but a fact of life in India that the waterways became more and more polluted the closer we got to the population centre and the end of our trip in Kollam. We had decided to spend a couple of days staying on Munroe Island, as Kollam was just another big town. After procuring a ride from the craziest auto rickshaw driver we have come across so far, we ventured out to Munroe Island in the dark, which was entertaining especially as the journey included a chain ferry, our favourite form of transport. When we woke up the next morning daylight revealed a gorgeous setting of water on three sides and a garden of palm trees with an excellent hammock for passing the day.

We spent the morning relaxing in the hammock before the heavens opened and we found ourselves slap bang in the middle of a spectacular tropical storm. Luckily the rain stopped for a couple of hours in the afternoon and we were able to head out on a canoe trip around the smaller backwater canals, Caro once again demonstrating her fantastic seafaring skills by stumbling around in the boat like a drunk toddler.

Our guide had brought his son along for the ride, which we assumed was to allow him to practice his English. He was studying for two separate qualifications at the same time whilst also working with his father, one was in business and the other in tourism, as this would give him the best job prospects in the area. The trip gave an interesting insight in to how the locals use the waterways for transport, fishing and particularly the large-scale fish farming operations which fuel most of the local economy. 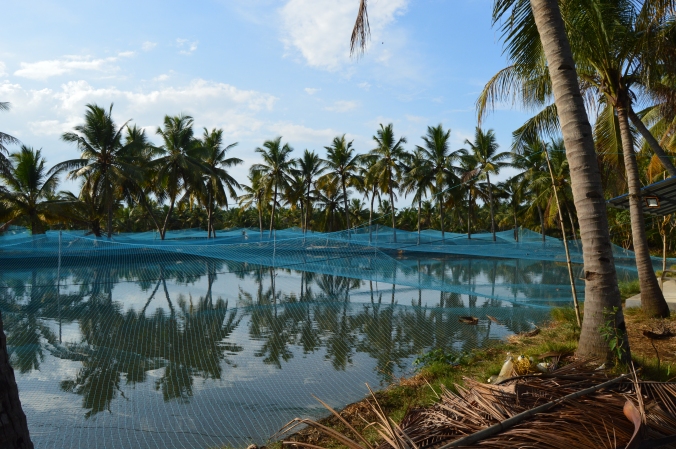 When we first set off, it felt like it was going to be a long two hours but actually the time passed very quickly. There was a surprising amount to see and it was nice to just float peacefully for a couple of hours enjoying the beautiful surroundings.

2 thoughts on “Fort Kochi and the Kerala backwaters”