Our journey to Bundi was an interesting one. We made it to Sawai Madhopur station and on to a train easily enough and the train journey to Kota is an quick couple of hours. Apparently, going to Bundi is what the white people do in Kota because as soon as we disembarked we were once again thronged by rickshaw drivers all asking us if we needed to get to Bundi and the bus station. We tried to haggle down the price but it seems that the rickshaw drivers in Kota have unionised and they would not budge on price. Our sole observation of the town is that it smelled fairly strongly of urine, although this could simply be the area surrounding the train station. We were deposited at the bus station, a dirt yard adjoining a low concrete building populated entirely by supremely unhelpful station staff. Our rickshaw driver asked hopefully if we would like to take the rickshaw all the way to Bundi and we were sorely tempted but resisted with some effort.

The bus station was a challenging experience. Nothing is written in English anywhere. We had pre-purchased our tickets but didn’t have any bus number or reference to match to a vehicle or indicate in any way which one to board and, obviously, we couldn’t read the Hindi scrawled all over the buses. Caro stood to one side as James queued at window one, only to be sent to window three where he was promptly informed that he needed to be at window one. Having provided sufficient entertainment for all of the other passengers there, someone finally took pity on us and took us round to the information desk. The man there was very friendly, smiled an awful lot and continuously offered us papaya from a plastic bag on his desk. He was, however, completely useless when it came to identifying our bus and suggested happily that we go to window one. It seemed that we were going to have to board any old bus with the hope that it would take us somewhere nice when another man decided to take us under his wing and marched us up to a bus. We had no idea if it was the right one but at this point we just had to trust someone, so we thanked him profusely and squeezed in to two seats with all of our baggage. The bus left 15 minutes earlier than we expected it to and our prepaid tickets were invalid so we had to buy new ones but we did make it to Bundi only slightly scarred by the experience and vowing never to venture near Indian buses again.

Forty-five minutes later we arrived in Bundi, secured a rickshaw and went through the usual rigmarole of telling the driver the name of our hotel, the driver nodding energetically to indicate that he knew where we were going and then stopping 5 minutes later to find out where it was. We made it to Hotel Bundi House which turned out to be a lovely place with a nice rooftop terrace, good food, an excellent dog and fabulous pink princess duvet covers. 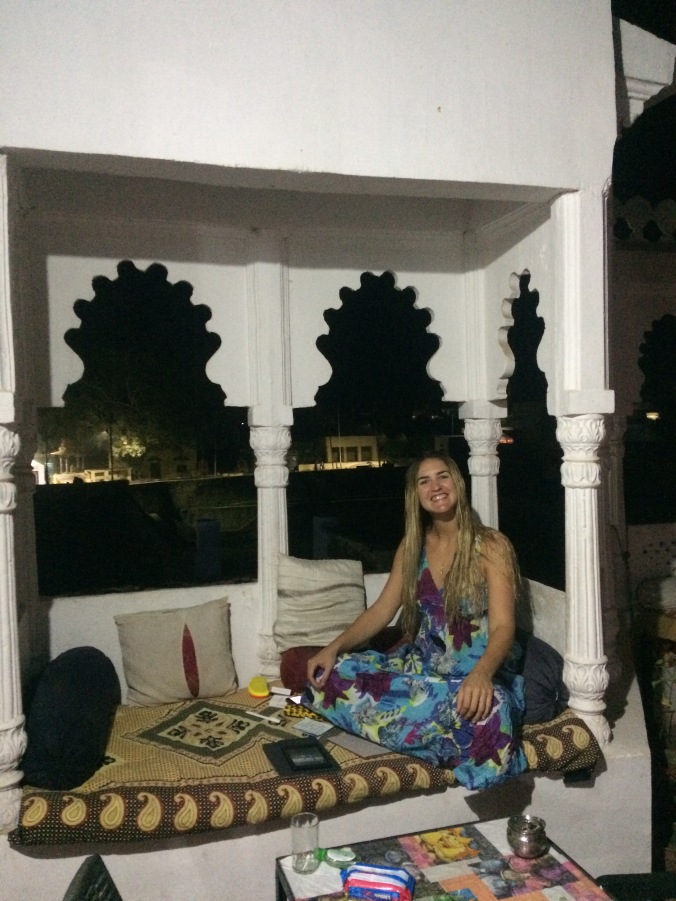 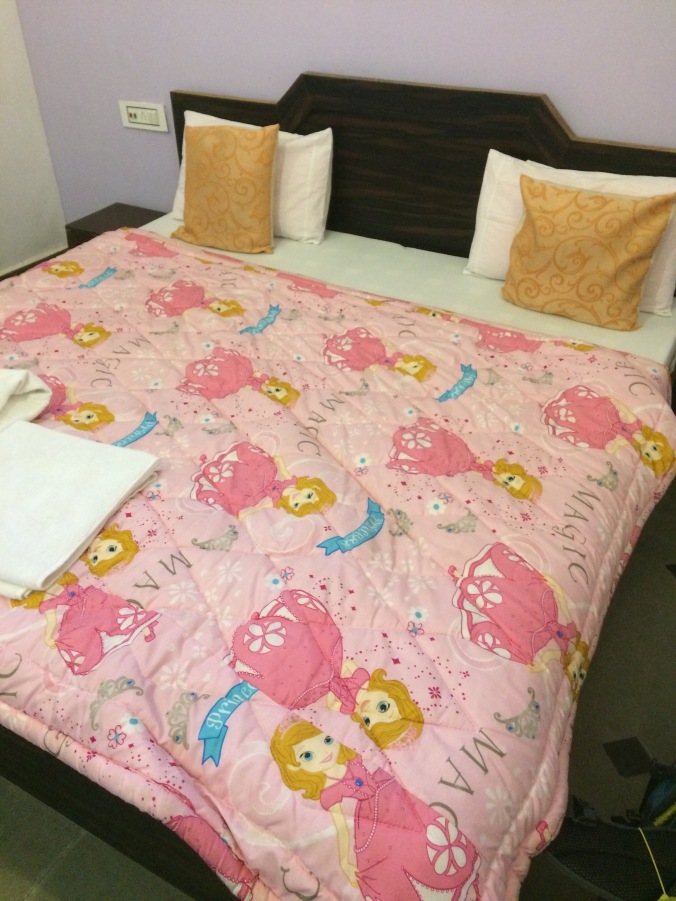 By far our favourite feature was the inverted Tupperware box complete with lid, screwed to the wall around the plug socket in the bathroom so that the plug for the water heater didn’t get wet. 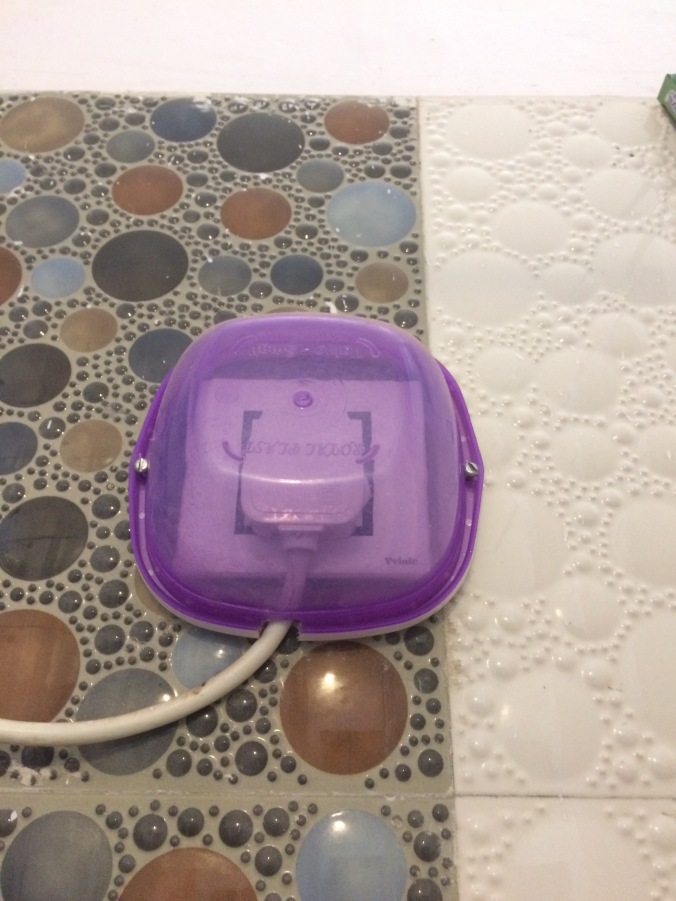 The following morning we enjoyed the novelty of porridge for breakfast, which was absolutely heavenly, and made our way out in to the streets of Bundi. Our hotel was a 15-minute walk from the centre and this came with the benefit of blissfully quiet and clean streets that were a real pleasure to stroll through as people were starting to open their shops. Here was a place in India that we could get on board with. Plenty of people feel this way and many linger in Bundi for far longer than they originally intended. 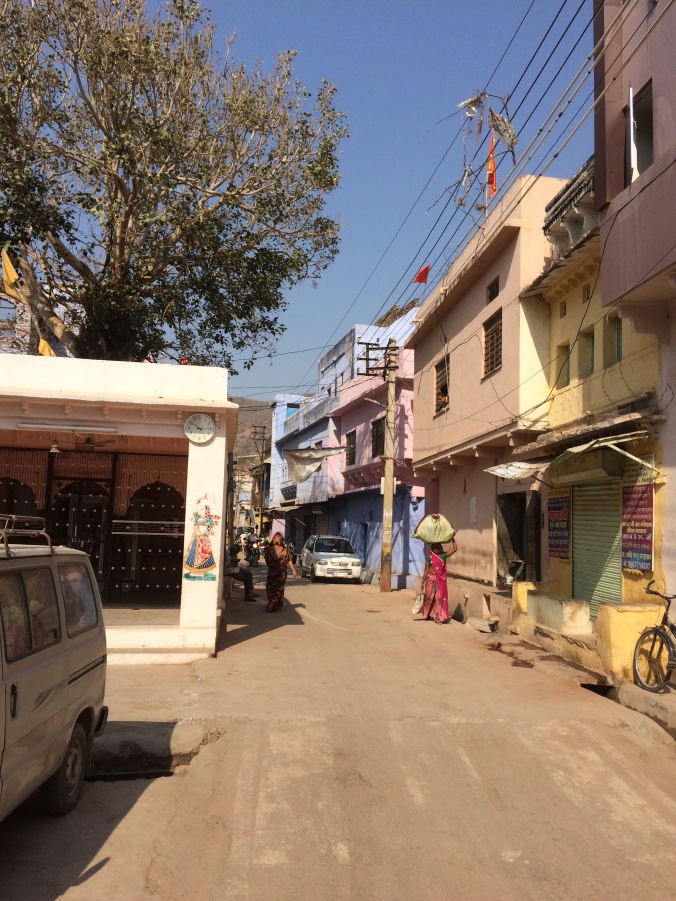 The primary tourist attractions are the fort and the palace. Before you roll your eyes and think “another fort”, Taragarh Fort is hands down our favourite fort of the trip and, were it not for the atrocious health and safety risks at every turn, it would make the best playing field for hide and seek ever. To cap it off; there’s no bugger there. 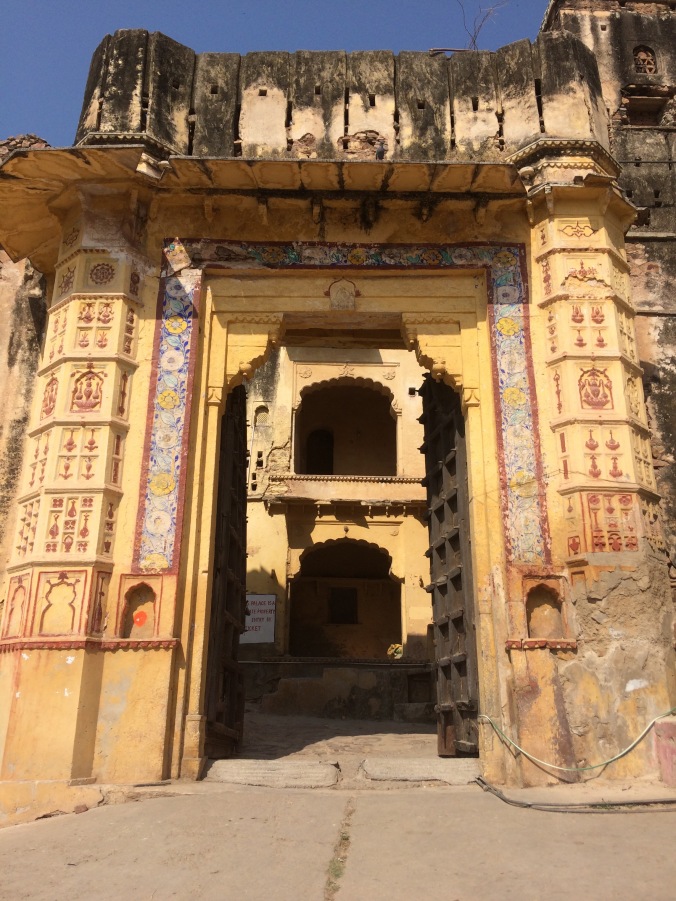 There is a rather strenuous climb up a cobbled path to get to the top so trainers are definitely recommended. As you ascend people will regularly ask to see your ticket, it’s difficult to tell whether or not they actually work there so we just handed our tickets over. About half way up is the entrance to the palace but we would recommend going all the way up to the fort first as you will want to get the climb out of the way early and there’s loads to see up there. Half way up again there is a solitary building standing off to the right of the path behind a large wall. Be sure to make this your first stop as the view from the balcony on the first floor is absolutely spectacular. 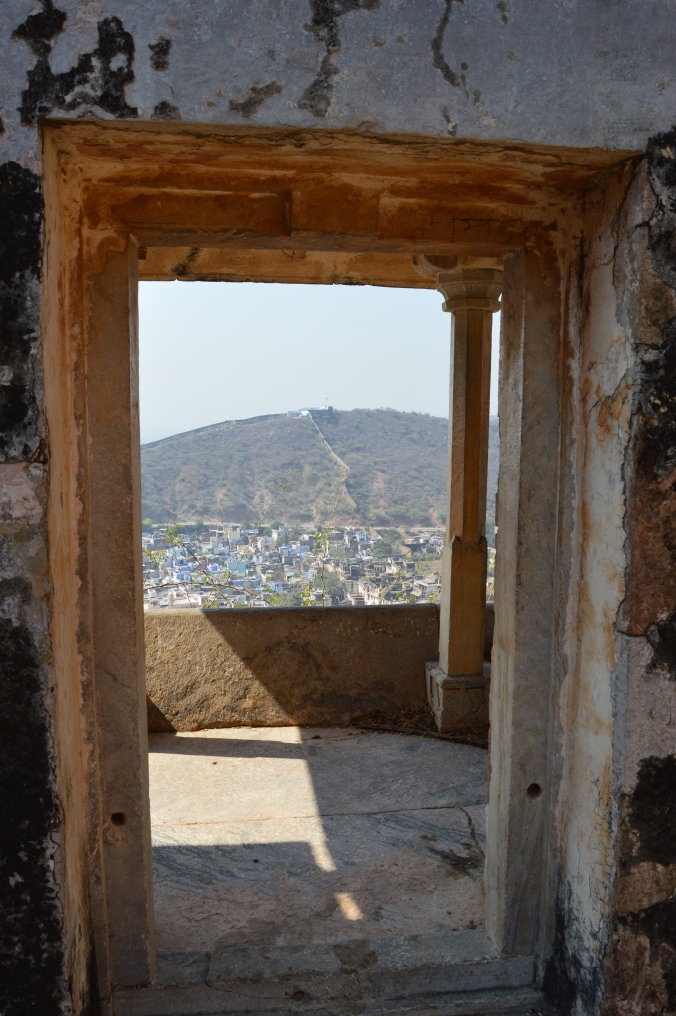 Up at the top, we stepped through a spiked gate where a thoroughly disinterested youth checked our tickets again and, without removing his headphones or glancing away from his phone screen, asked us if we wanted a guide. We declined and ventured in to the maze of crumbling grandeur that is the fort. 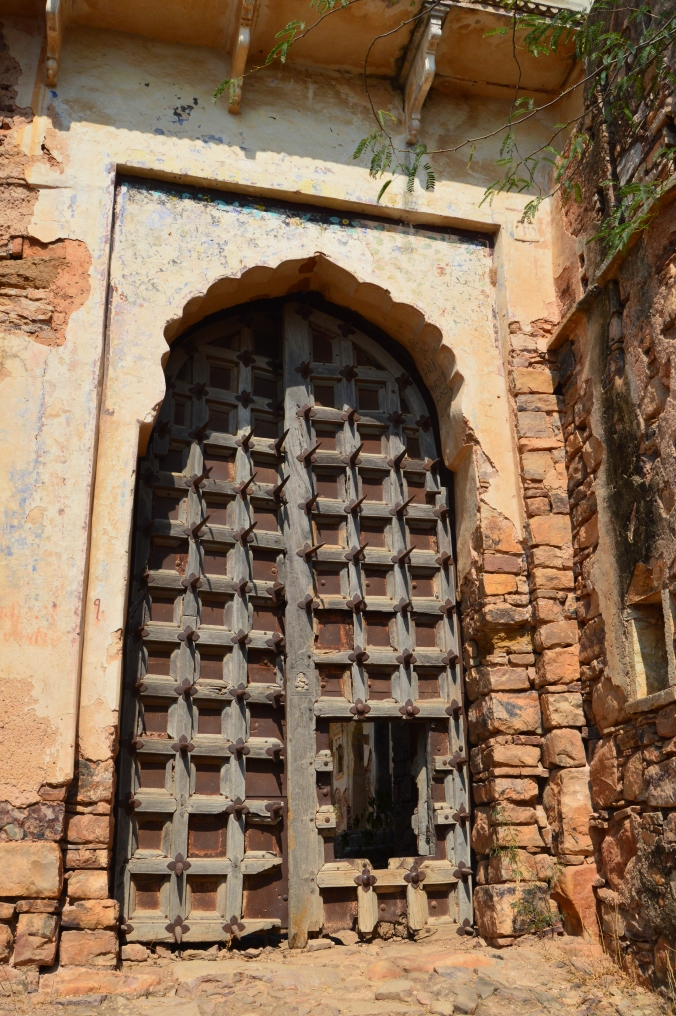 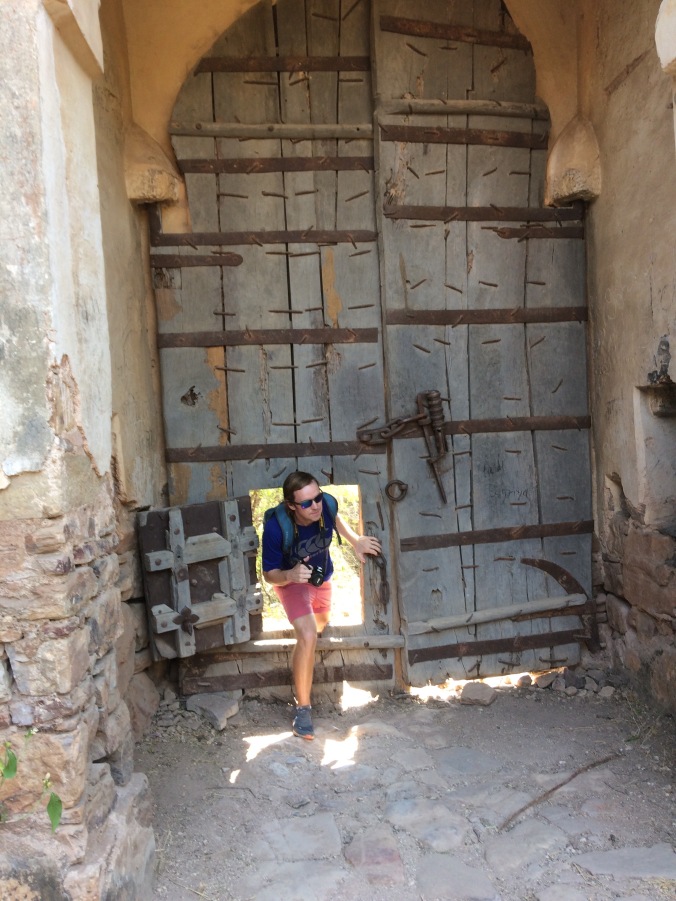 You can pretty much go anywhere you want; we clambered up half staircases leading to sheer drops, ducked through small passageways that opened on to courtyards with frescoes still in-tact and strolled along mezzanines that have long become the kingdom of thousands of monkeys but retain their beautifully tiled floors. 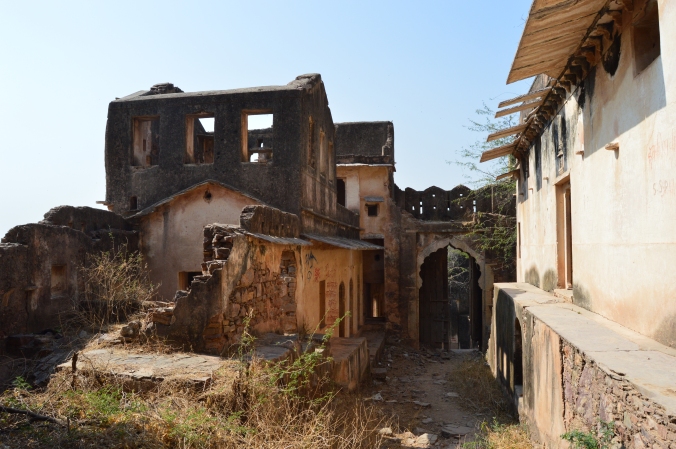 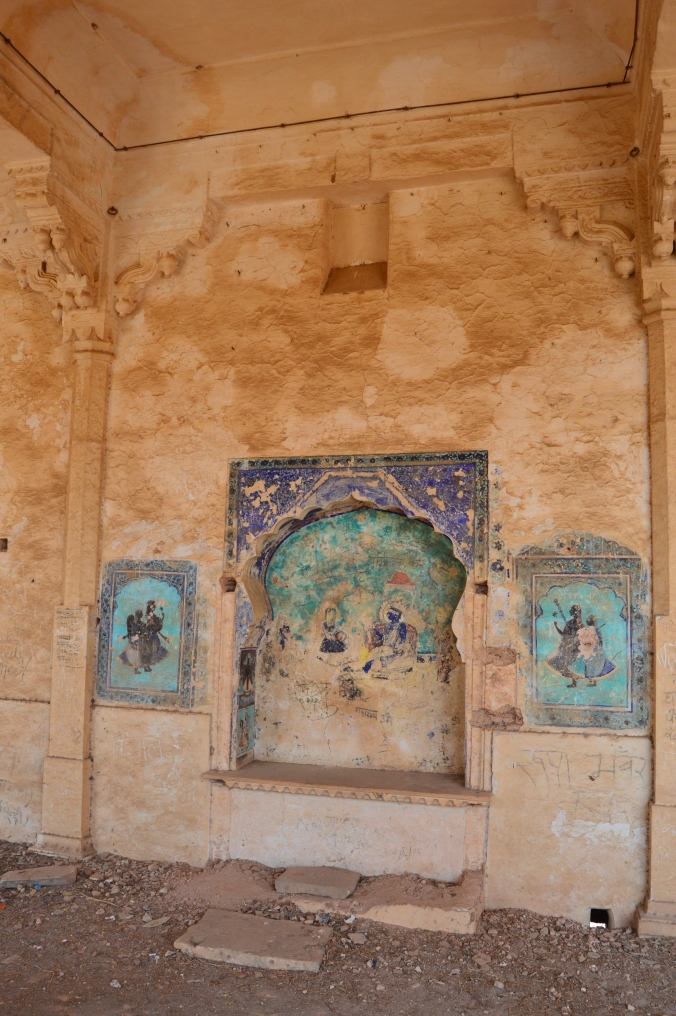 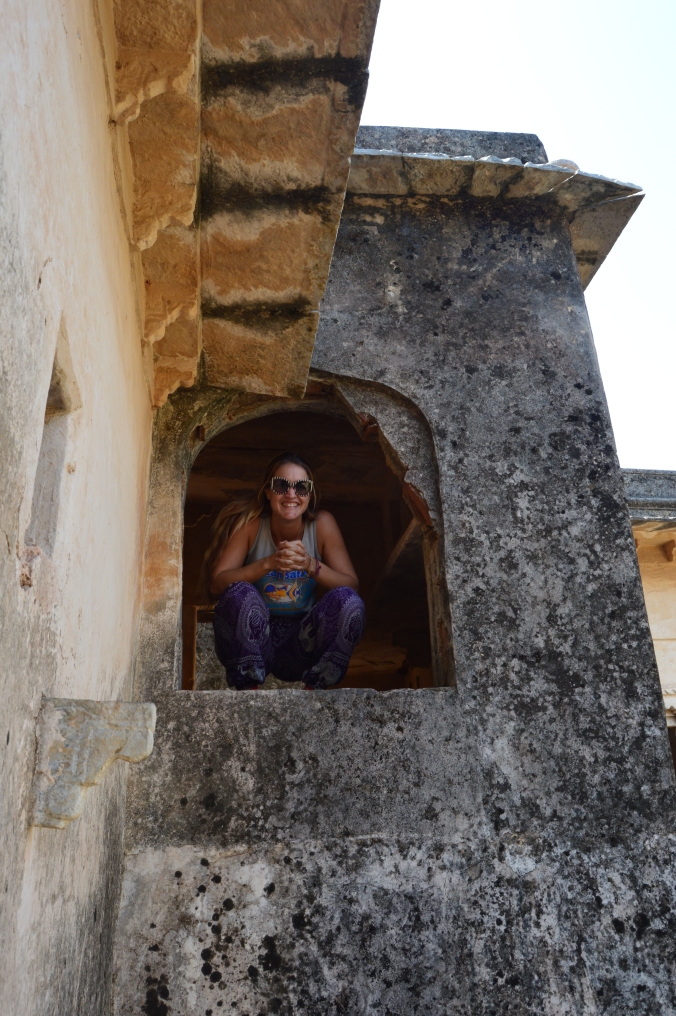 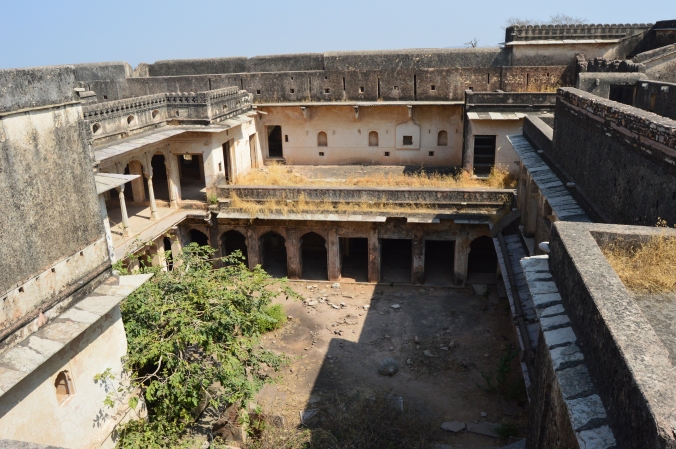 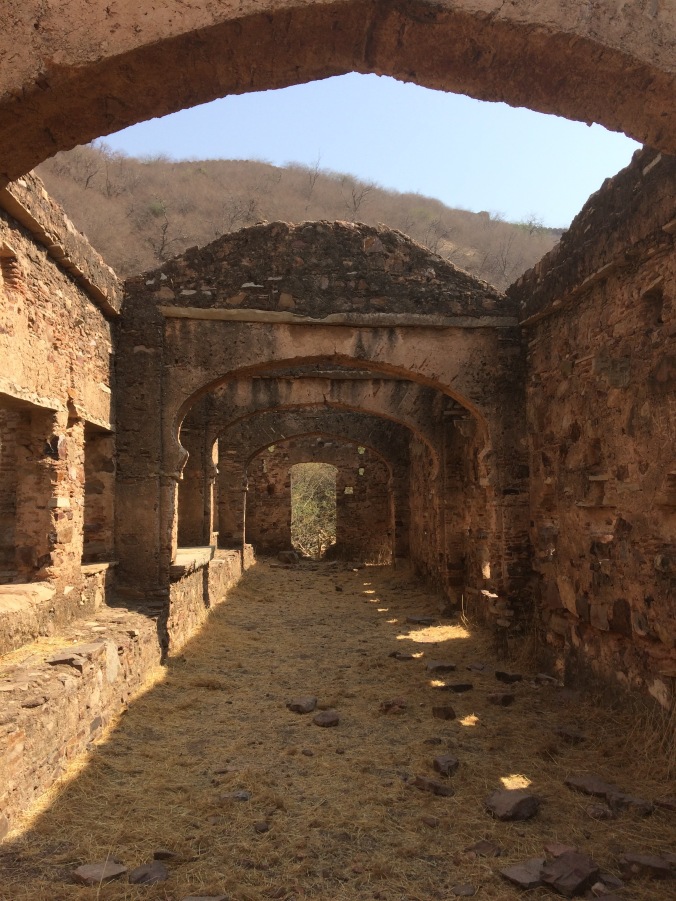 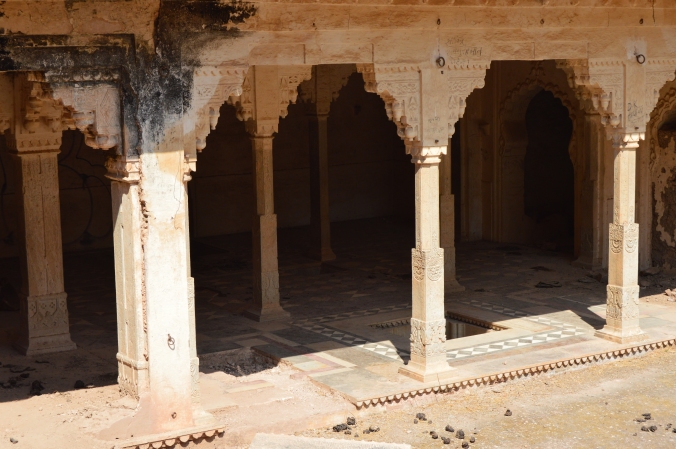 Outside, an enormous step well is bordered by small pagodas and temples and what looks like an elaborate diving platform. It is here in particular that you can imagine how splendid the place must have been when in use. 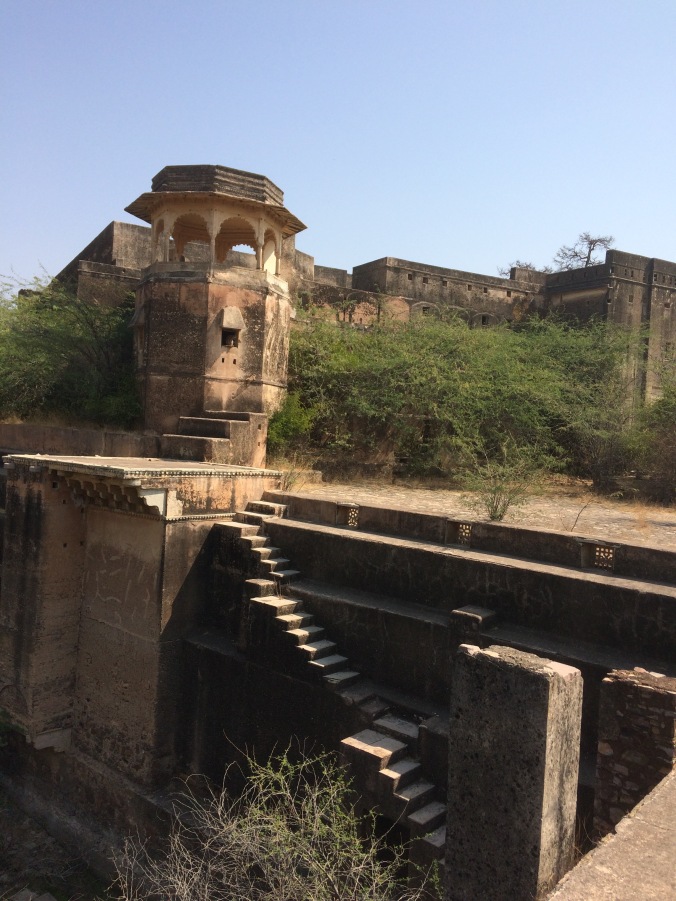 The whole sprawling expanse takes up a huge area and we only saw two other people there in the two hours that we spent exploring. Both of these people were carrying sticks which we realised were for dealing with errant monkeys and James promptly equipped himself with the compulsory monkey-whacking stick. His propensity to fidget meant that he had hit himself twice within 5 minutes and Caro concluded that the stick had in fact fulfilled its purpose. There is so much to see at the fort and it felt as though you could explore for many hours through the various rooms, courtyards and passageways. The fort is surrounded by walls and on the far side, furthest from the town, you can look out over an empty desert landscape. 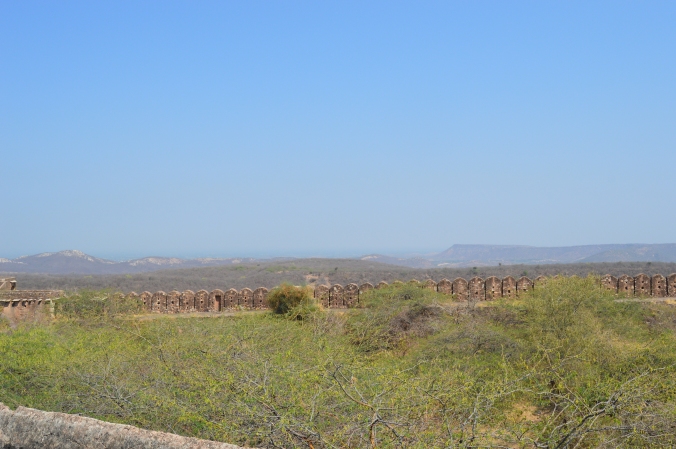 Our ticket also gained us entry in to Bundi Palace and we encountered far more by way of crowds here. Sections of the palace are well-maintained and others are crumbling, unfortunately there are large swathes that are not open to the public and loom tantalizingly above you as you stroll through the elephant gates and in to the courtyard beyond. 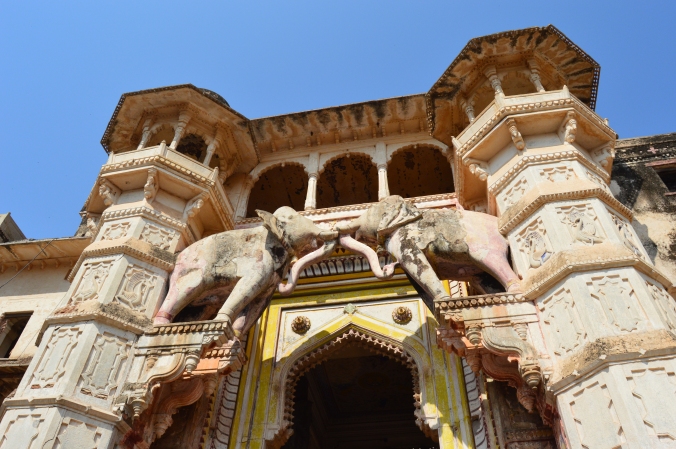 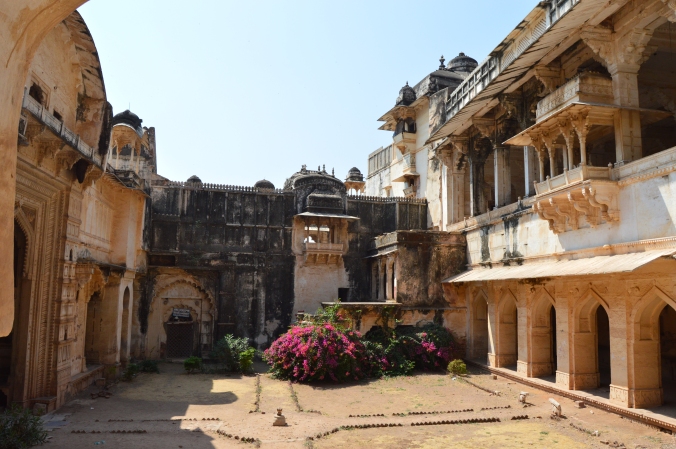 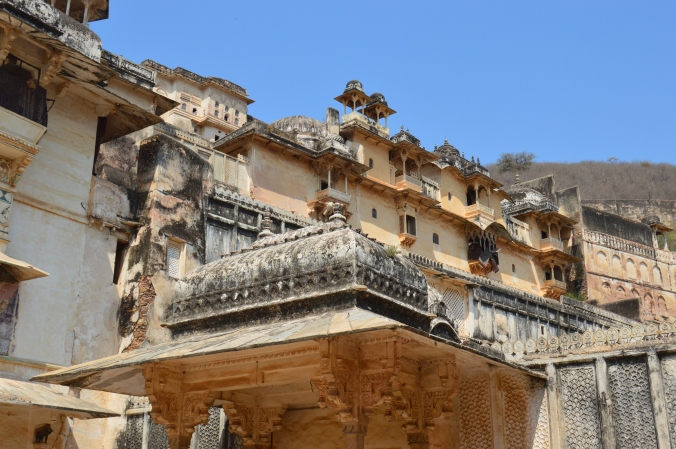 Of particular note is the throne made of solid marble and the inner chambers with their beautifully decorated walls. 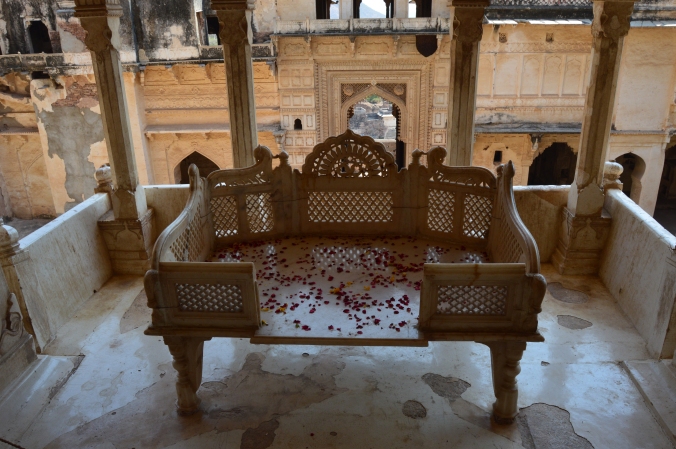 The most spectacular feature of the palace is actually accessed housed in another hall, the Chitra Shala, and is accessed through a separate garden. 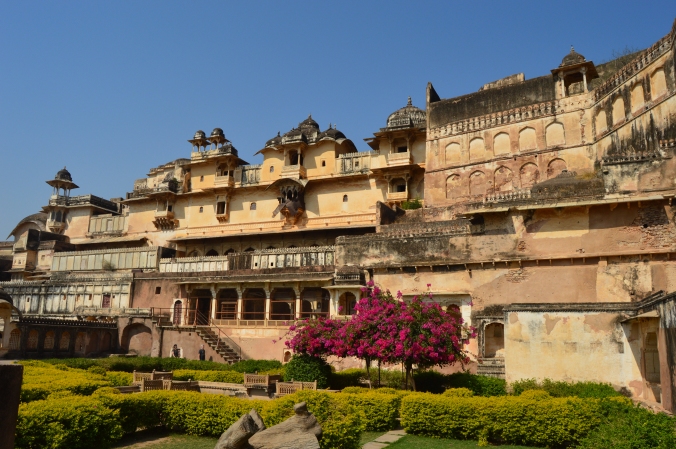 The gorgeous, elaborate murals with minute detail will completely absorb and mesmerise. Due to the crowds we didn’t linger here as long as we could have done but even a short visit is a treat. 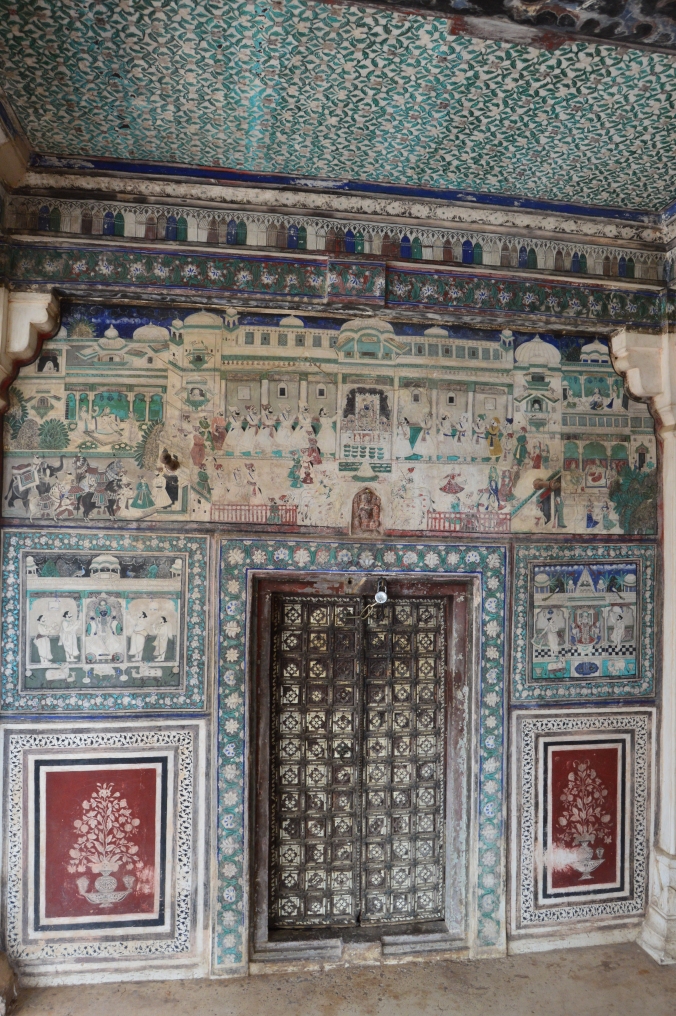 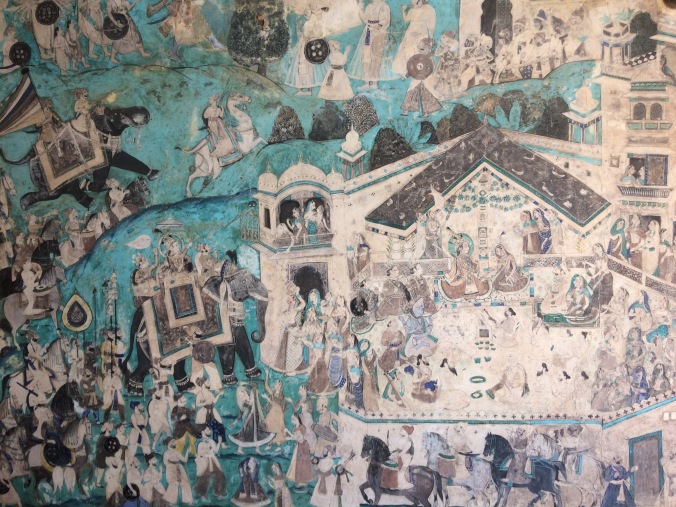 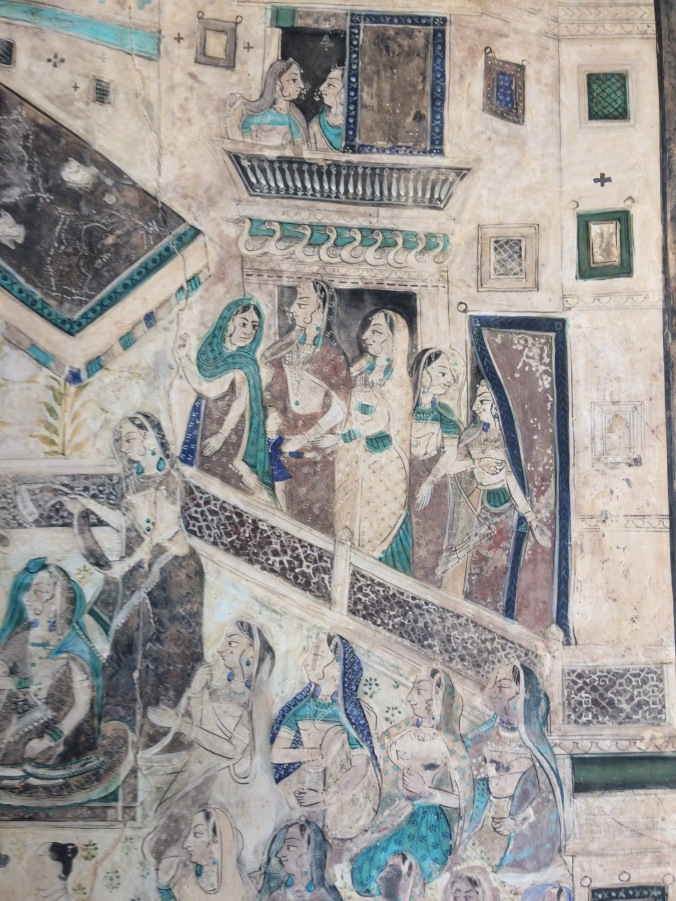 We wove our way back to the road and down to the centre of town where our peaceful strolls became a thing of the past as cars, rickshaws and scooters swerved around cows with the necessary accompaniment of horns. Our destination was the Queen’s Step Well, Raniji Ki Baori. 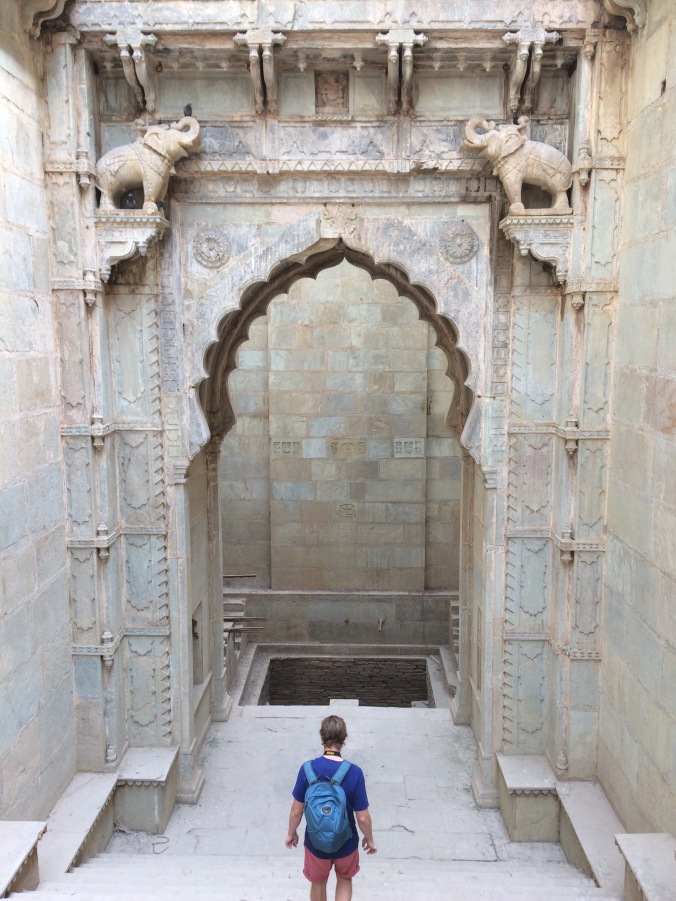 It costs 200 rupees each and for that you get to see a pretty impressive well but you do need to bear in mind that it is just a well and manage your expectations accordingly. The well is 46 metres deep,  319 years old and during monsoon completely floods. All of which is pretty cool.

At this point Caro was getting hungry and after an unsuccessful battle with several ATMs and a second sensory overload back through the market we found a place that served almost exclusively western food. We were in dire need of something other than curry and devoured our pizzas with indecent haste. We made a brief pit stop back at the hotel to do battle with the bank and get the credit card unblocked before Caro passed a highly enjoyable half hour browsing for more comfortable trousers. Bundi definitely operated more at our pace and we really enjoyed our time there but we decided that we were ready for a change of scenery and booked a ridiculously early flight to Cochin from Jaipur the following morning. That evening, uncharacteristically, the heavens opened and we watched a spectacular thunder storm from the roof terrace before retiring for a very short night’s sleep.