Ella Rock is a real highlight of any trip to Ella and I would 100% recommend it. Anyone with a moderate level of fitness can tackle it no problem, I’ve also recommended a shorter route for those who really don’t feel up to making the hike to the summit. I was climbing it on my own out of necessity and so read a lot of blogs and advice about what to do and which way to walk to make sure that I had a firm idea about where to go. I had absolutely no problems climbing the rock on my own and simply took a few sensible precautions. Firstly, I made sure to keep other people within or just out of sight, say a couple of hundred metres, this is easy to do as it’s a popular spot. I brought my phone and James knew where I was and what time I expected to be back. Simple as that, you don’t need a guide. Sometimes you get a bit more attention in Sri Lanka as a woman but, in my experience, it has never been aggressive and didn’t happen at all in Ella, they are really used to white women in shorts.

Lots of blogs say to start early, because of the heat. I was walking in February and started just before 9am and could comfortably have started an hour or so later, it really depends on how good you are with heat. The beginning and end are flat and that’s when you are in the sun, almost all of the climb is under cover of trees. Wear suncream, bring lots and lots of water and wear sturdy shoes. I was one of the only people wearing hiking boots but was mightily glad of them. Final tip, download the maps.me app, it has all of the routes up the mountain and was incredibly helpful in getting me to the top, although it does drain your battery so make sure you are fully charged.

On to the walk. You start at Ella Station, turn left and just walk off the end of the platform. If you are on the main road there is a shortcut on to the tracks, turn left off the road just before the railway bridge and there is a dirt track on to the railway line. Ignore the sign that says it is dangerous to walk on the tracks but obviously do keep an ear out for trains. The first section takes about 40 minutes and is simply along the railway tracks. During this stretch I was joined by cows and monkeys and dogs, all of which I named James except for one dog who trotted along just in front of me. I decided to call him Toto as he was joining me on this great adventure.

I was just conjuring up ideas for the blog post where I would be able to write about my journey up to Ella Rock with Toto faithfully trotting beside me the whole way when Toto decided he’d had enough of me and buggered off to walk with someone else. I was on my own again.

You’ll need to cross a couple of railway bridges, if you hear a train coming don’t start to cross because it would be absolutely terrifying to be on there at the same time as a train. Don’t worry, you can hear the train for about 5 minutes before it gets to you.

Now for the practical bit: there are a few turnings up to Ella Rock and you have to pick the right one. The first is just after a shrine on the left-hand side, if memory serves I think that there is even a sign for Ella Rock there.Every blog that I have read says that this is the most complicated way to get there and guides hang out in the bushes ready to provide their services when you are miserably lost. Locals sitting there will point you down this way, just smile and politely say that you are going further on.  Keep going until you have gone through the station of Kithalella and the turning is a few minutes after this on the left.

It is not obvious, even after reading many blogs and with maps.me I missed it the first time and had to turn back. Apparently there used to be blue arrows marking the route but I didn’t see a single one. There is a foolproof way of making sure you get the correct turning; it is on the left-hand side and shortly after the 166½ railway marker, if you reach the next marker you have gone too far.

There’s a hairpin turn from the railway track and a bridge across the river within a minute of turning off.

Cross the bridge. I am told that you can’t really go wrong from here and maybe that is true but there are a lot of routes up the hill and some very circuitous so this, I think, is the easiest route. I went left straight after the bridge and basically just stayed left after that, sometimes walking through extremely tall grass but on what was an obvious track.

There are smaller rough tracks off to the right and left but these are clearly for access among the tea plants. Keeping staying left until you reach a drinks hut. (You can turn left in front of it and take a detour out for the view but it is a dead end and you will need to retrace your steps.) A track runs along the right of the drinks hut, take this and keep going up. This isn’t the proper climb so don’t get your hopes up just yet, it takes about 10 minutes to reach the next stage and the track isn’t always obvious but you basically just find your way across the rocks and roots as best you can. Just stay left but not too far left because you will fall off a cliff. You will be rewarded with your first viewpoint, and it’s a beauty. 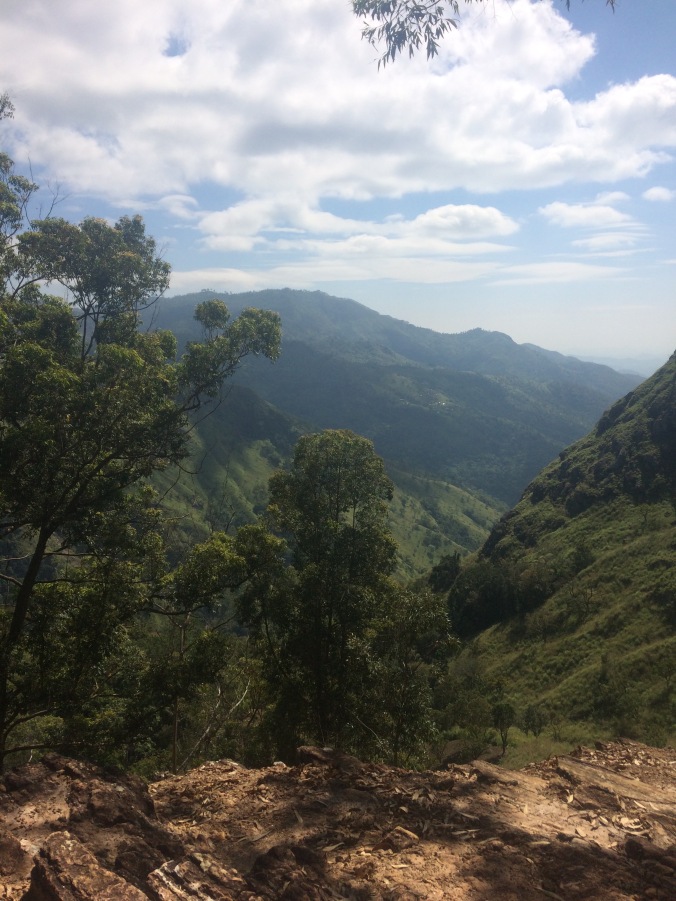 I didn’t have James with me to take beautiful pictures so if you aren’t sold, this was the look on my face when I saw it.

This is the point where I would recommend those not wishing to tackle the remainder of the climb to turn around. I would also say that the walk this far is definitely worth it for this view alone. I will repeat that anyone of moderate fitness can do the next bit, it’s just a bit tough going for a while.

Take time to have a bit of a breather here and drink some water before the climb. You never lose the view to your left entirely but it does become obscured by trees and you will be too busy watching your feet and breathing hard to notice much. And do watch your feet, some of the ground is loose and crumbles away under foot, there are also a lot of roots to negotiate. As ever, keep left, don’t fall off the cliff. It took about 20 minutes for me to reach the top, and I would say I walk at about an average speed. The moral of this story that it is a hard 20 minutes but it is only 20 minutes and it really is worth it when you get to the top. After the climb, you turn left on to a wide track and in a minute you will come to a wooden building, walk past the left hand side of the building and you are there, congratulations. There was a man making tea on a fire and Toto had sent his brother up. 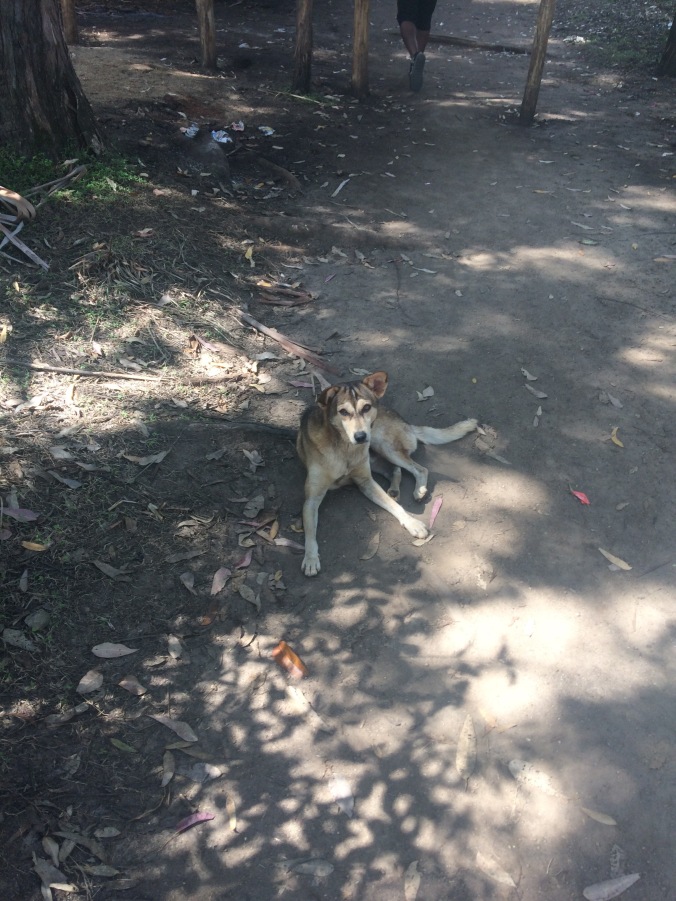 The views were absolutely beautiful. 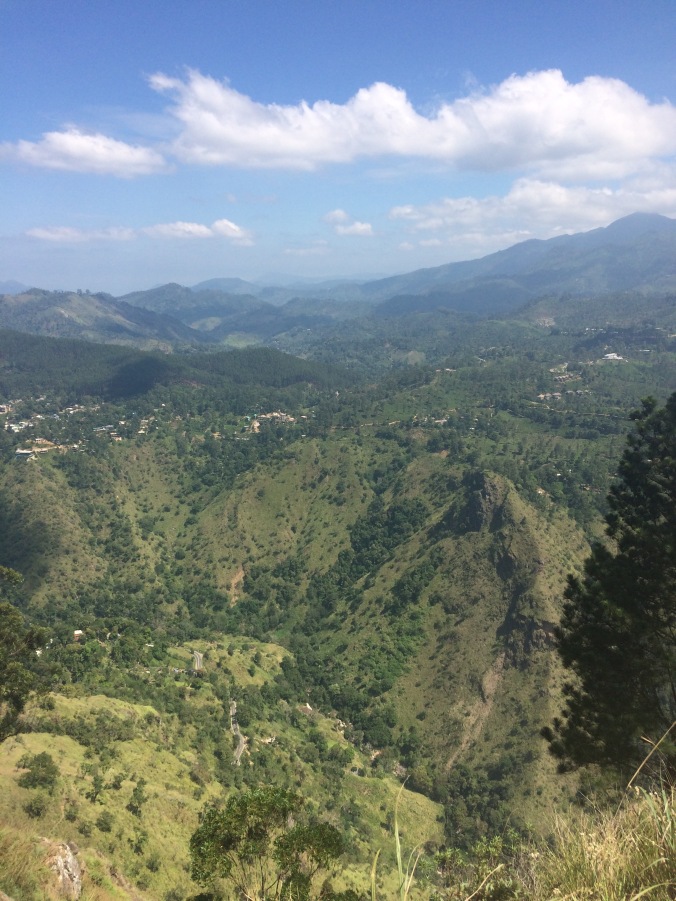 I won’t pretend that I had the place to myself, there were plenty of other people there and getting a photo without them can be a bit of a challenge. 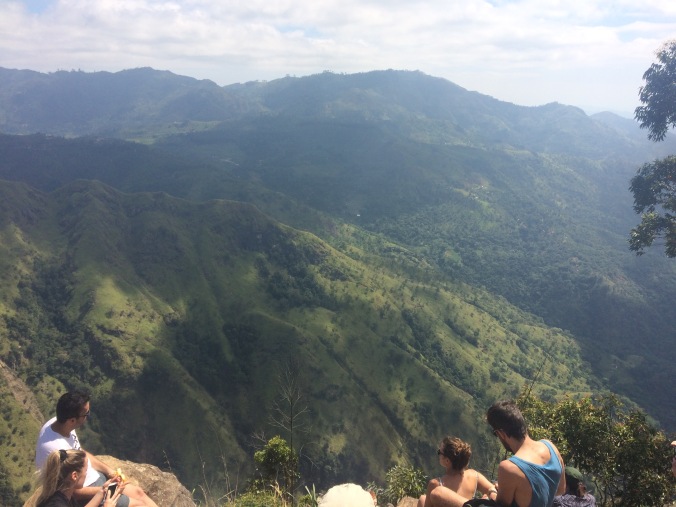 However, if you just carefully walk around you will generally be able to find a spot to sit down yourself and watch the world go by. I had the joy of watching an eagle dip and soar across the sky in front of me when I had settled right on the edge. 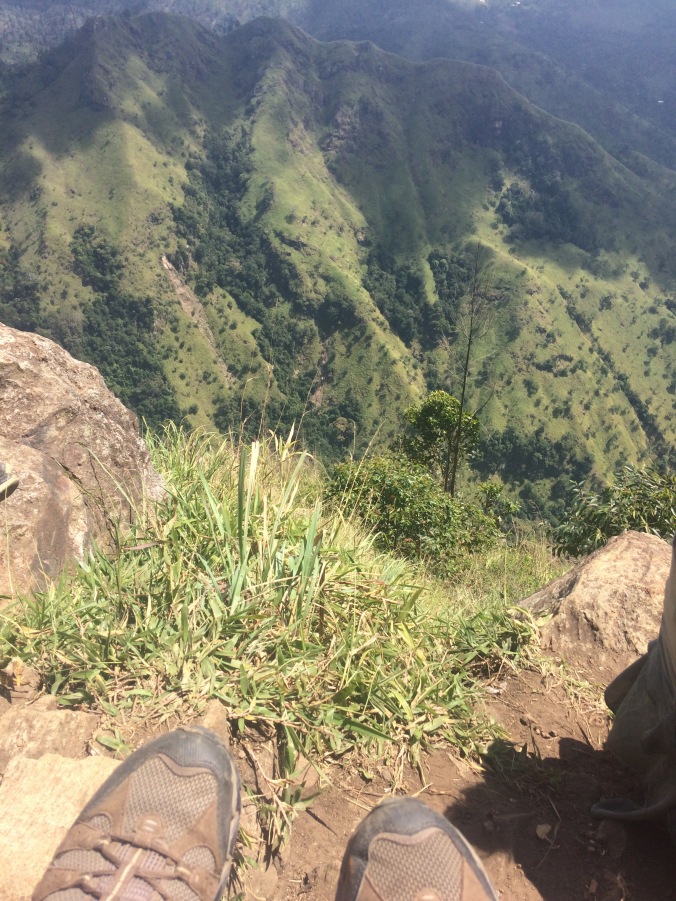 I am going to be a bit controversial here and say that this is not the best spot on Ella Rock, although it is certainly the most popular. If you do have the maps.me app this next point is simply marked as a viewpoint but the track there is correct. Once you have had a snack and absorbed the view go back to the wooden hut and turn left in front of it where a track leads you for about 10 minutes through a rubber tree forest, which looks like the Forbidden Forest (from the movie not the books but, yay Harry Potter!)

Keep the edge on your left and after 10 minutes you will come to a turning down the slope to the left. A short way down this you will see the cave temple on your right, which is pretty cool because it’s in the middle of nowhere and on the side of a cliff.

The same distance on again and you come out at a glorious viewpoint with very few people there.

Once you have had your fill head back up towards the wooden hut, at the cave temple take one last look out to your right.

I recommend going back to the wooden hut and retracing your steps all the way down the hill to the first viewpoint. From here you can go back the way you came or you can turn left away from the cliff edge and head down through the forest. I did this on the way back and was very glad of three things: (a) that I hadn’t gone this way on the way up (b) that I did a new route on the way down (c) that I had maps.me because it made sense of the route. The route down through the forest cuts back on itself a couple of times and without the app I would definitely have made it down safely but it would have taken a while.

I do recommend taking a different route though, and this one was really lovely. After walking down through the woods for about 15 minutes you reach a small collection of huts that the path takes you in between, this is where you switch back and forth a couple of times and if it feels like you are walking through someone’s garden you are on the right track. 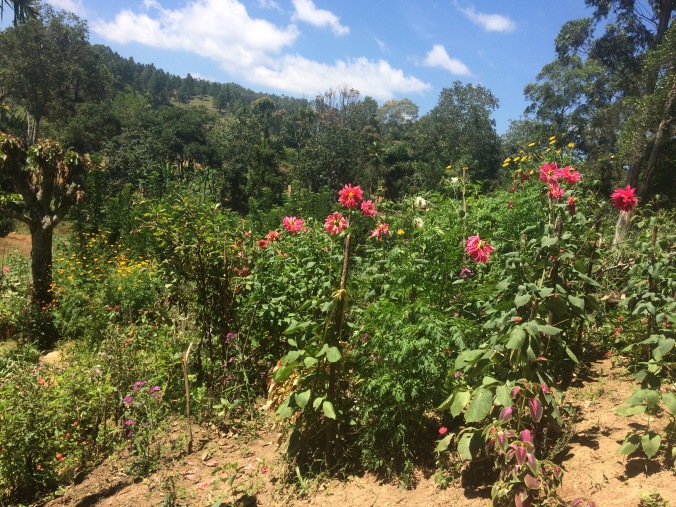 There is a stretch of paddy fields in front of you and once you reach the edge of these you skirt around the edge, keeping the fields on your left. At one point this requires stepping over a low barbed wire fence but it is definitely the right way. Keep going round the field until the mountain is behind you and continue following the same track. You will have beautiful views over the fields on your left.

Round the next corner and voila you are back at the bridge. When I was there, men were doing laundry in the river.

Cross the bridge, walk up the track and take the hairpin bend to the right back on to the railway tracks towards Ella. I will confess that the walk back along the tracks feels longer than on the way out but there is the thrill of the train coming towards you and you can pretend that it is the Hogwarts Express.