Our first stint of beach time, though nice, had not been as relaxing as we’d hoped so we set aside a couple of days to spend on the east coast beaches. It was the off season but the weather forecast looked good so we caught a couple of buses to Trincomalee. We didn’t linger in town and instead made straight for Uppuveli where we had booked three nights at the Lobster Inn, a quiet haven just 30 seconds from the beach. 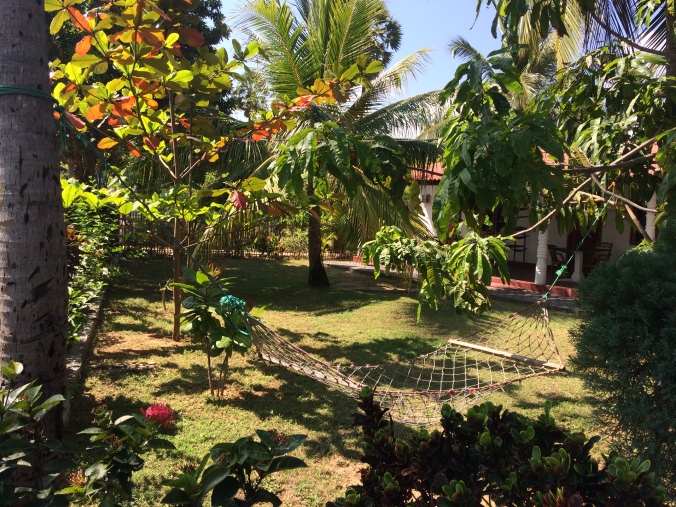 We can definitely recommend it as a good value place to stay; the facilities were good, the rooms were clean and there was a kettle for tea. It ticked all of the right boxes for us. We spent the next two and a half days on the beach, occasionally getting up from our sunbeds to eat or swim.

As there was no restaurant at the inn we also had to venture out for all of our meals, which meant that we tried a few of the local restaurants in our three nights. One of these even trusted us to return and pay the next day when we didn’t have the right change for dinner. The culinary highlight might have been Caro single-handedly devouring an entire seafood platter, which the waiter had informed her would probably be sufficient for two: 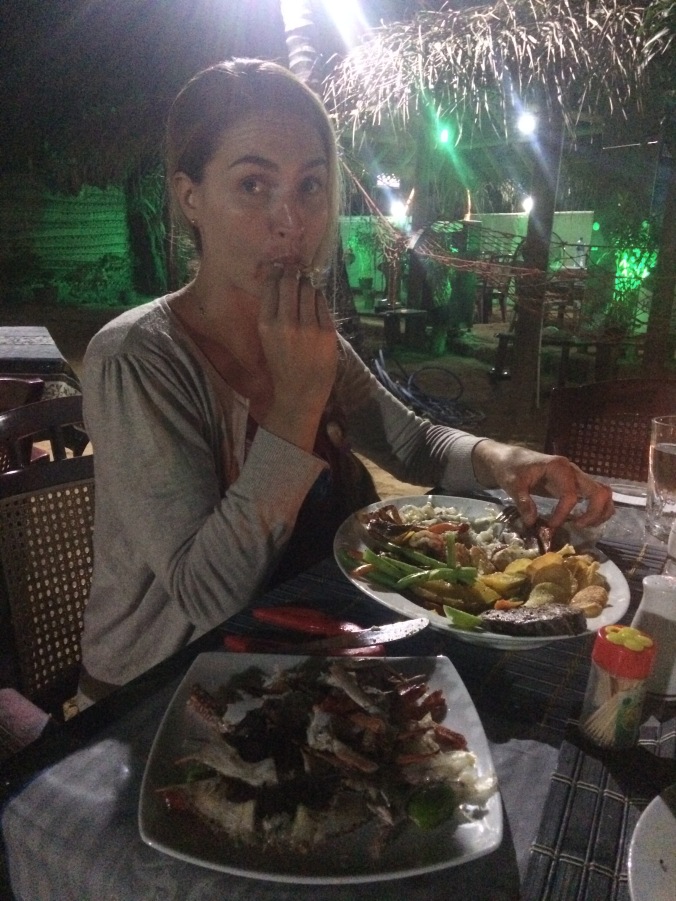 The waiter was suitably impressed. Also high up the list was the breakfast when we finally succumbed to the insistent tones of the bakery tuk tuk, which toured the area non-stop, blaring Für Elise from its loudspeakers. We hailed it down and purchased various bread products which were accompanied by a pineapple expertly butchered by James.

Or maybe it was the fruit and nut ice cream which was inexplicably neon green.

If you are after restaurant recommendations, Restaurant Tuna and Trinco Lanka were both very good. We did also manage to finally sample a coconut rice pudding breakfast, which turned out was a bit too sweet for our tastes.

We were told that it was about as quiet as it ever gets in Uppuveli and this may well be why it seemed so much cleaner than the beach towns we had visited before. Perhaps it is grubbier when there are more tourists around.

As he was finally feeling better, James got the idea in to his head of going for a run on the beach, which we duly did in the morning. The early start meant that as we ran along the beach we saw watched two groups of local fisherman pulling in an enormous net in a sort of semi-circular tug-o-war. In a half hour period a good quantity of rope had been piled on the beach but the net had still not materialised. Unfortunately, neither of us had a phone to capture the scene, but it was cool to see.

For a bit of quiet relaxation, Uppuvelli was exactly what the doctor ordered and we would recommend it to anyone in the off season. Just check the weather forecast first and be warned that cows do wander the beach. 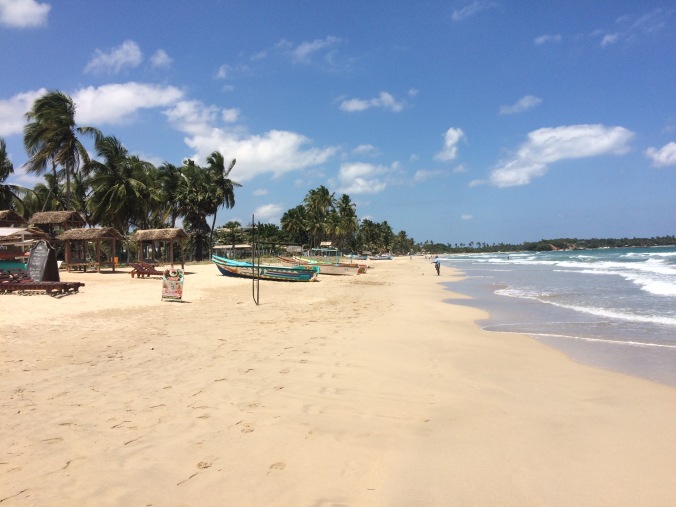 It was time for a bit more culture and we boarded a bus to Anuradhapura. We found ourselves completely unable to pronounce this name, Sri Lankans say it really quickly so we never quite grasped it. Therefore, when asked where we wanted to go, we resorted to saying “Anuuu” and looking helplessly at the person we were talking to hoping they would finish the word for us. This approach worked 100% of the time and, yes, we felt like useless tourists. Amongst ourselves we now simply refer to it as Anu Whatsit.

We could write for days about everything that we saw at Anuradhapura because there is such a vast amount. Instead, we will just call out some highlights and give our tips. After researching extensively we decided to engage a tuk tuk and driver for a tour, rather than rent bikes. There were pros and cons on each side but, having done it now, we are glad we made the choice that we did. Our three main reasons for advocating a tuk tuk are:

We made sure that we paid for our own tickets at the gate, so that we knew our money was going to the right place, and we had our Lonely Planet to make sure we ticked off all of the key places. It was very quiet when we were there, just a few tourists and worshippers. Our first stop was the enormous Jetavanaramaya, the world’s tallest stupa which is built from 93 million bricks. James had to put his skirt on again. 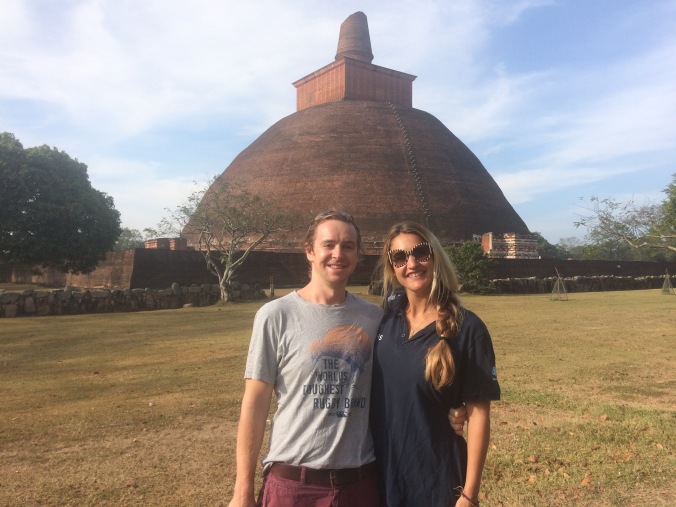 After this it took us about 20 minutes to look around the museum. It is an odd jumble of things but the frescoes and the ancient urinal are worth a look. There are a lot of temples in Anurdhapurda so we confess that they did start to merge in to one after a while, although all were lovely to see. 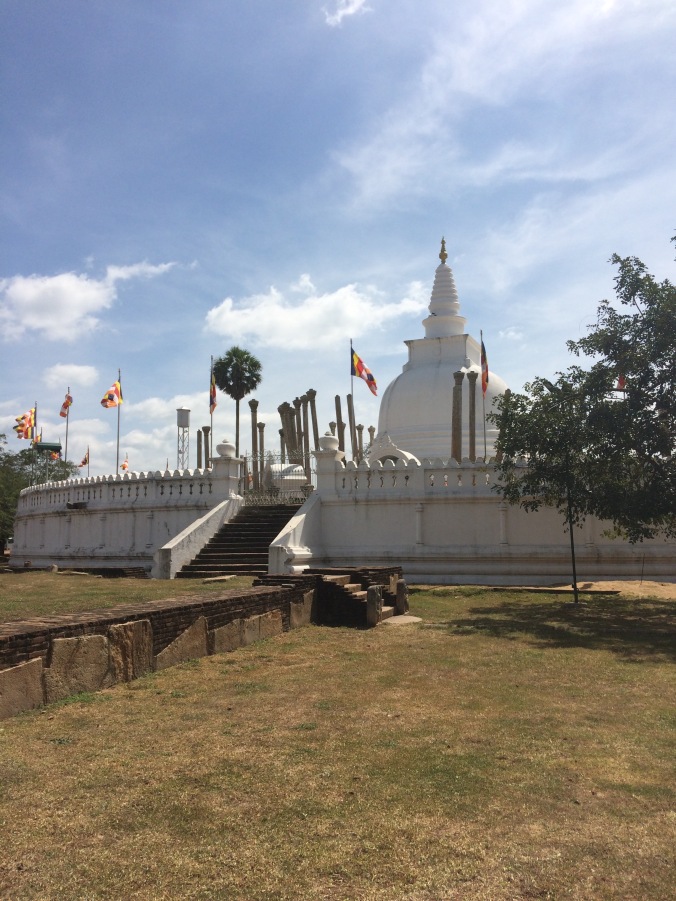 We watched open mouthed as a team of men in makeshift harnesses worked their way painstakingly along the wall of one stupa, weeding minutely between the bricks. This struck us as a never-ending task. 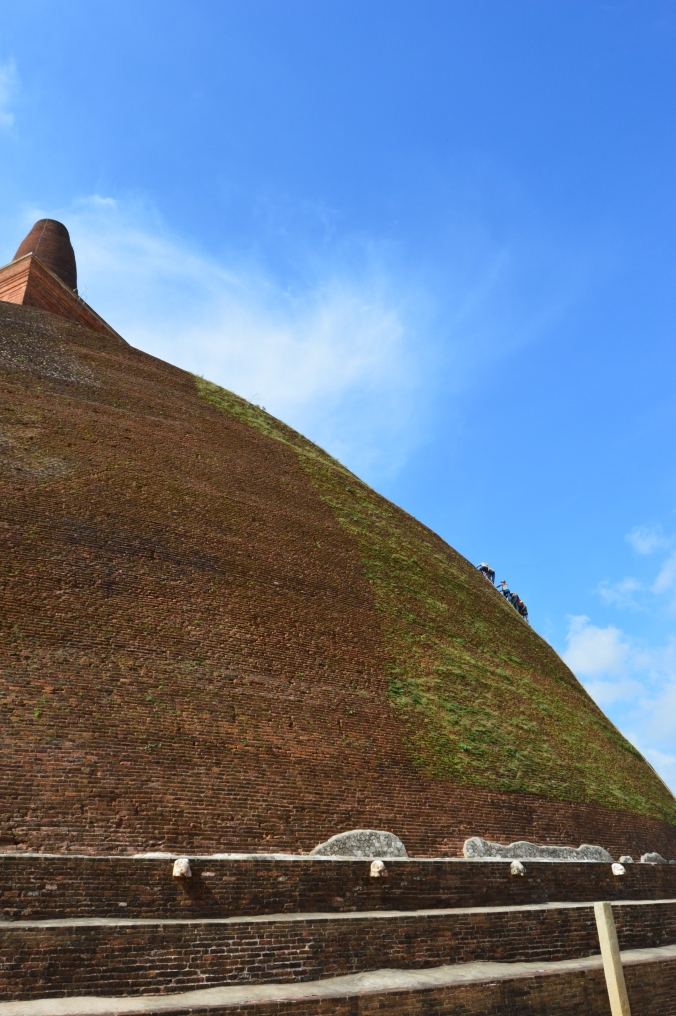 The city is spread out over a large area and there were vast stretches of grass and water in between the sites. Once again, we were glad that we hadn’t cycled.

Whilst the city is uninhabited, and has been since the 11th century,  the temples are still very much in use and we were there in time to watch this monk presenting an offering of food.

He was ok with us taking pictures even if it doesn’t look like it.  The city consists of more than temples, although the other buildings are in a much worse state of repair. We looked around the ruins of houses and palaces where all that remains are doorsteps, low walls and guardstones.

Caro: James, go and stand over there like one of those Buddha guardstones

Such a good sport.

The remains of a monastery that housed 5,000 monks has retained enough of its interior to give a sense of what it must have been like to live there, you can identify the kitchens and the dining hall with its enormous trough of a rice bowl.

The original resting place of the Tooth Relic, before it came to Kandy, lies in a lesser visited part of the city, its glory and appeal seemingly having departed with the tooth itself.

We saw so much else besides, too much to cover here, and we would definitely recommend going. We did get a bit weary though. Our 6 hour tour actually only lasted 4½ hours, but that was plenty for us and we felt that we had seen the best of it.

Our last stop of the day was the Jaya Sri Maha Bodhi tree which is believed to have been grown from a branch of the original Bodhi tree, under which Buddha attained enlightenment. The tree was planted in the middle of the 3rd Century BC and is therefore the oldest recorded living tree in the world.

It’s worth stopping to see because of how old it is, seriously it’s over 2200 years old, but don’t expect anything visually mind blowing, it’s just a tree at the end of the day. As we made our way back to out of the city we saw something that could make your blood run cold.

We assume that a majority of the lessons are focussed on the multiple ways in which you can use your horn.