James was finally feeling ok and so we took the leap and said goodbye to Ella. Given that we didn’t know when we would be able to catch it we hadn’t bothered reserving seats on the very popular Ella to Kandy train. This particular journey has attracted incredible fame due, in large part, to Lonely Planet naming the route one of the most beautiful train journeys in the world. The station was bustling when we arrived and our 10am train was busy but we found seats and could move to the doorways easily to take photos when we wanted to. This seemed to be the standard, our carriage was filled with backpacks and frequently empty seats as people lingered in the doorways.

It appears that we were going against the main flow of passengers, when we passed a train going in the other direction the carriages were overflowing with people. The more popular route is from Kandy to Ella but we would definitely advise reserving a seat well in advance if you are going to travel in that direction, the people rammed in to the middle of the train were certainly not enjoying the views.

Unfortunately, we had a rather overcast day for the first section of the journey from Ella to Nanu-Oya so the views weren’t as spectacular as they could have been. Here are just a couple of the hundreds of photos that we took. 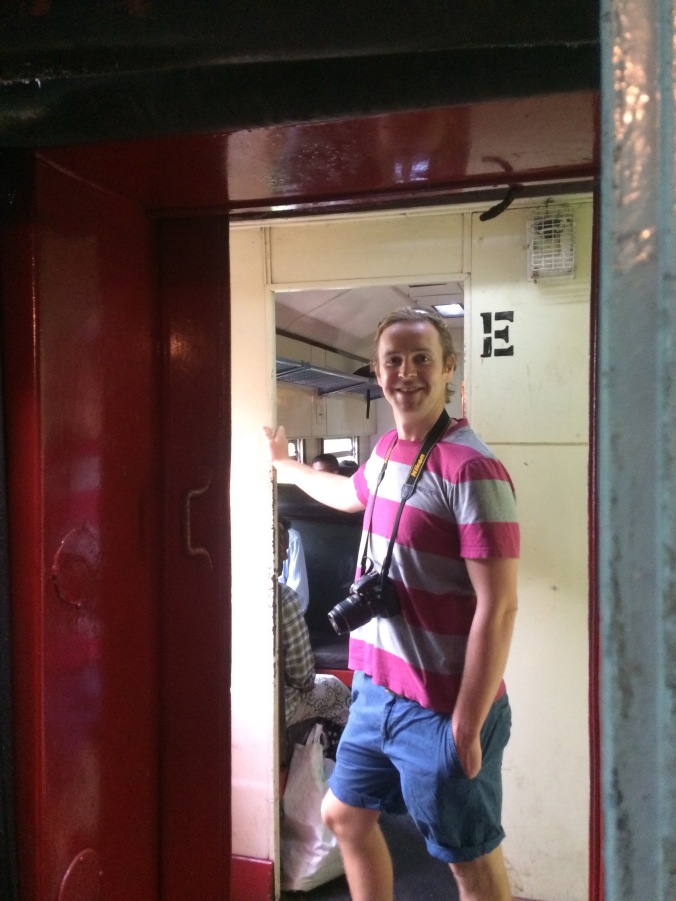 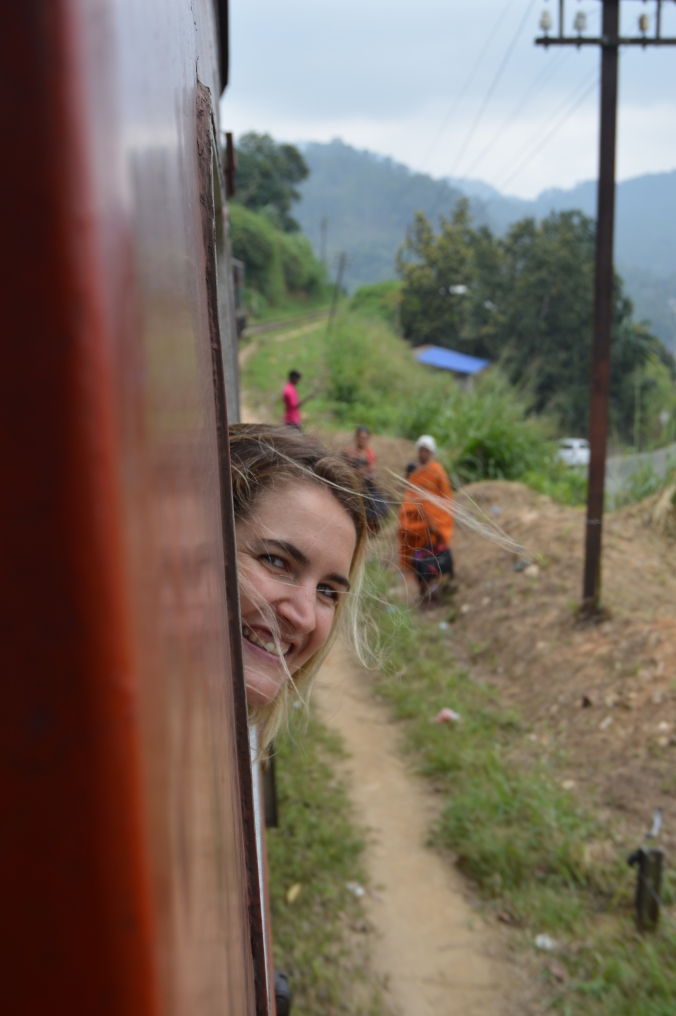 As we pulled in to Kinigama station we passed by a school where hundreds of children with their pristine white uniforms, red ties and braided pigtails were gathered outside. We aren’t sure if they were taking part in some sort of sports day or perhaps practicing for something but there were at least 4 games of cricket under way. All of a sudden a sort of flash mob erupted with drums and music and a choreographed dance/march that involved about 300 children. Perhaps they had timed this for when the train came past or maybe we were just lucky but it was quite a spectacle. As we pulled away from the town, older children lined the tracks waving enthusiastically.

We broke up the journey by hoping off at Nanu-Oya and getting the bus to Nuwara Eliya, with the aim of walking to World’s End in Horton Plains National Park the next morning and then continuing our journey to Kandy. There was absolutely no storage left anywhere on the bus so we took up three seats to ourselves with our mountain of luggage. 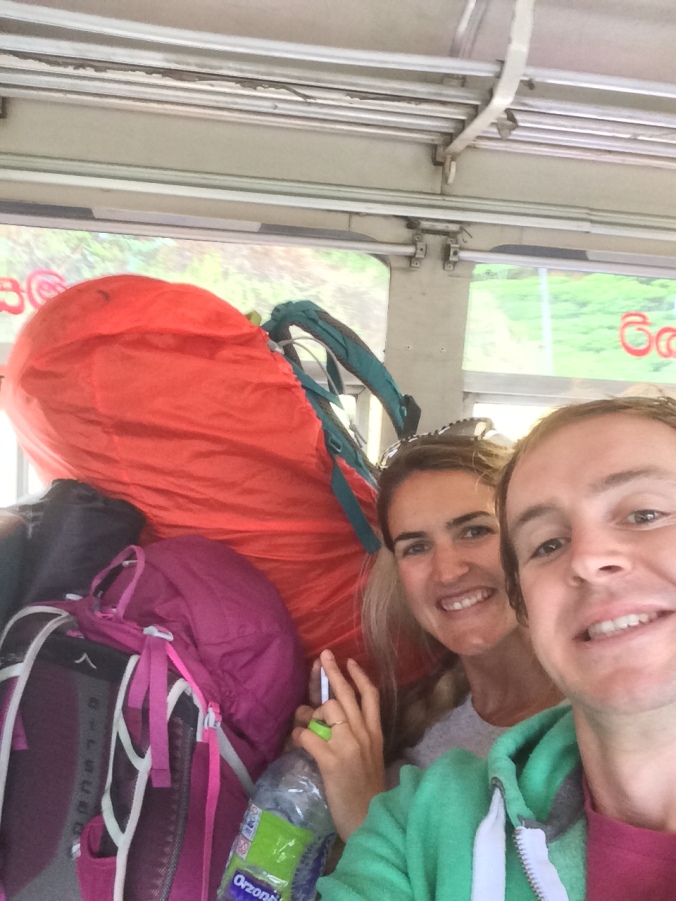 Nuwara Eliya is also referred to locally as Little England. Beyond the weather bearing a striking resemblance to that of the home country, it was grey and threw it down with rain, we struggled to find many other similarities. It hosts a number of vaguely British looking buildings which would not look out of place back home but it was mostly the rain.

Blindly following the Lonely Planet, we decided to explore Victoria Park which it describes as one of the nicest and best maintained in South Asia. If this is the best South Asia has to offer, we will be giving the rest a miss as it was rather a let-down. There were some nice spots like the photo below but for the most part it was rather dirty and run down. 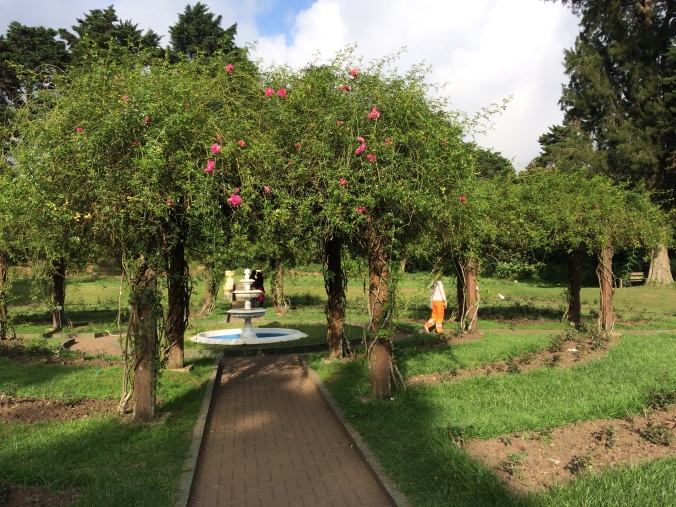 The town has a couple of shopping areas, in a market near the bus stop James was convinced to try on a pair of Ali Baba trousers although he refused to buy them. If we get two comments on this blog saying that he should invest in some Caro will make sure that it gets done, help a girl out folks! 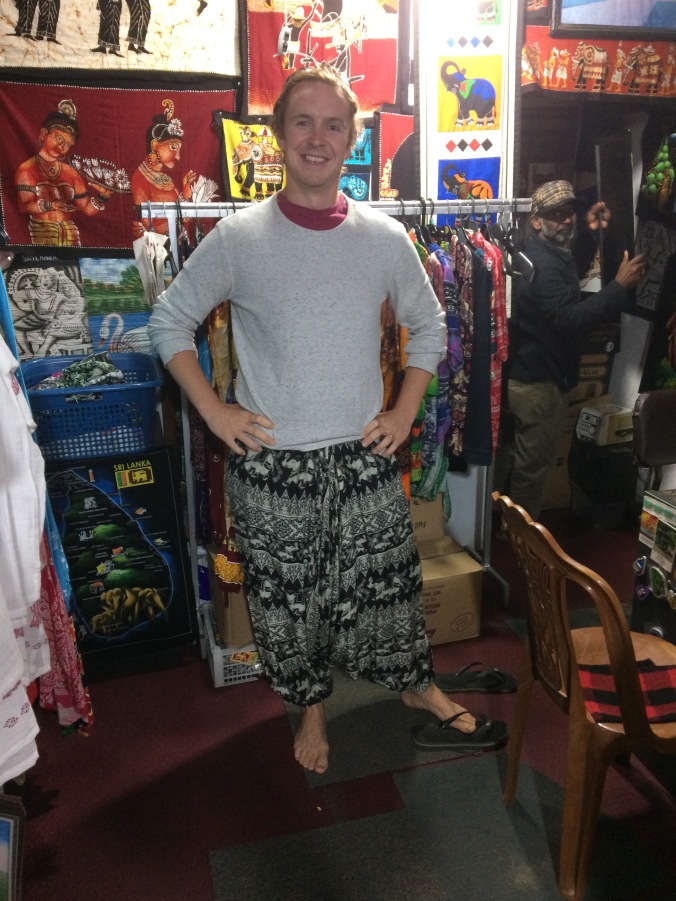 Nanu-Oya also has a market where you can buy what we assumed to be knock off outdoor gear. We ventured in briefly and it was the only place we have been in Sri Lanka where the stall owners have been really pushy, so we left quickly. The heavens opened so we dived in to a local café for food before heading back to the guesthouse where we continued our debate about whether we wanted to fork out for the walk the next day. Our dilemma was that, whilst World’s End is one of the most famous things to do in Sri Lanka, it was going to cost us a whopping 9000 Rupees between us just to go for a walk. We had done some fabulous (free) hiking in New Zealand and when we read the mediocre reviews of what you actually see, we decided to give it a miss and got back on the train to carry on to Kandy the next morning. Unless you do decide to do the walk, you can probably give Nanu-Oya and Nuwara Eliya a miss if you are short on time. That being said, the stop did break up what would have been a very long train journey and we are not sure that we would have appreciated the second half anywhere near as much without jumping off in the middle.

The train was definitely busier than the previous day but still nothing compared to the train heading in the opposite direction. The platform for the Ella train was heaving despite the fact that the train was not due to leave for over an hour.

Standing on the platform Caro had taken traveller chic to a whole new level by finally conceding to travel in her hiking boots, rather than lugging them around. Combined with bright orange elephant trousers she reckons that she looked absolutely bloody fabulous. James was not so sure. 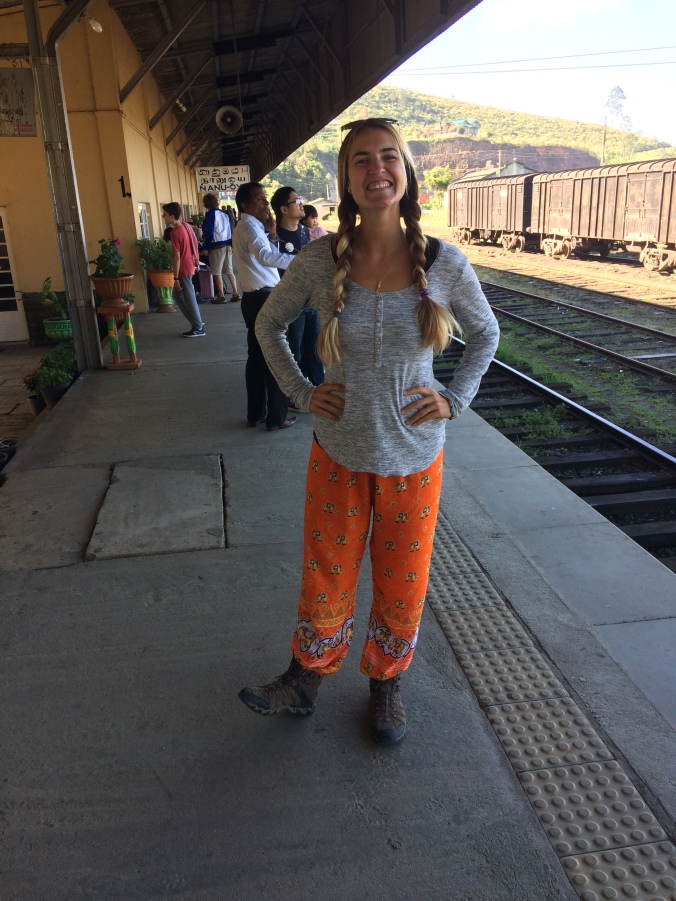 We were without seats for this section of the journey but we did manage to find ourselves a doorway to sit in, once again nabbing the best seats in the house. The views swap from either side of the train as you venture towards Kandy but, on balance we would say that the left-hand side as you face the direction of travel probably has the lion’s share. 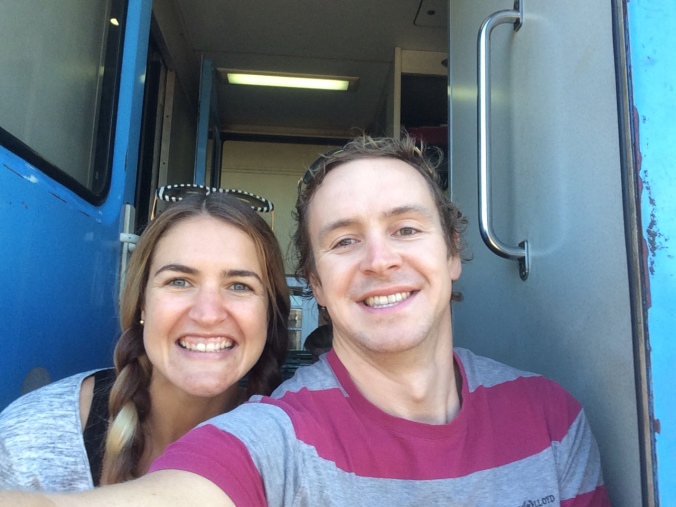 It was a beautifully clear day and we enjoyed the incredible sights as the train wound round the hills and mountains giving views of little villages, stations and tea plantations. It was simply splendid. 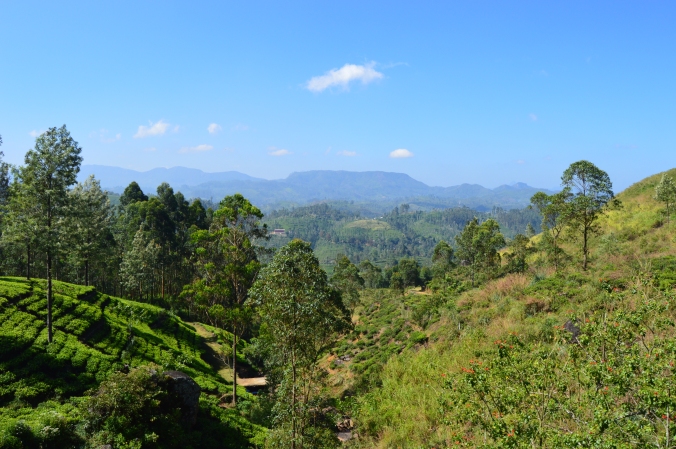 If you don’t have 7 hours to spare and only want to do a small section of the train journey; we would recommend the section from Nanu-Oya to Hatton. It’s a tough call but we think this was probably the most spectacular. The closer we got to Kandy the busier the train became until there was physically no more space for people and luggage.  The first 3 hours of the journey had been unbelievable, but the last 1 hour did start to drag a bit and we were stiff from sitting on the step. The views also disappear and we entered an area that didn’t look too disimilar to some stretches on the DLR.

So we were quite relieved to arrive and get off at Kandy. James nearly failed to disembark as people starting pushing on to the train before we even came to a halt, refusing to let him off with our backpacks as they piled on in the search of seats. Tip: be prepared to jump off and walk with purpose, there is no British etiquette when it comes to boarding trains.

It took us a few minutes to find a tuk tuk driver who knew where our homestay was but we were soon on the road whizzing around the lake in the middle of Kandy. Once we were within a couple of hundred metres of where we thought the homestay was the tuk tuk driver pulled over and started asking people for directions, always an ominous sign. After driving around a bit more, he gave up and asked for the phone number. When we eventually pulled up he tried to get us to pay more, James stood his ground admirably, it wasn’t our fault that he lied about knowing where it was and then got lost.

Our host was great, he gave us a list of things to do, arranged tickets to watch Kandyan dancing and even gave us a lift in to town once we had dumped our bags. We were dropped on the edge of the lake, which is pretty but surrounded by extremely busy roads so you need to get around towards the Temple of the Sacred Tooth Relic to get some peace. 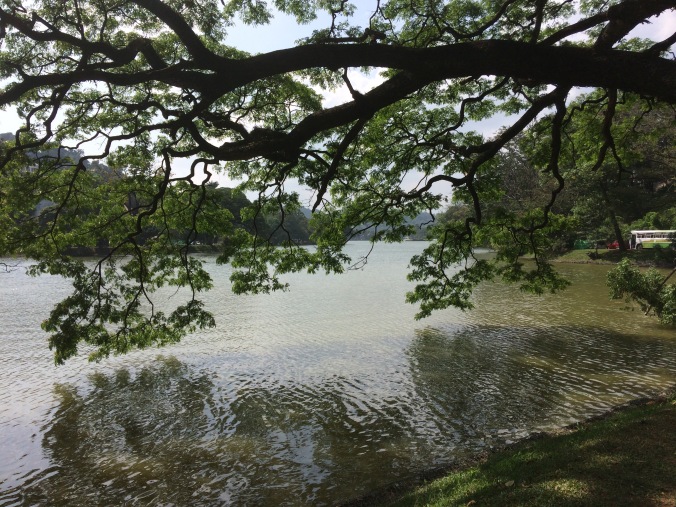 We decided not to go in to the temple, it was just too expensive to see a box and we knew that we would be seeing a lot of temples later on in the trip.  We had a couple of hours before the show and we took ourselves on a walking tour of Kandy, which is basically a busy, dirty and dusty town much like any other. We nosed in a couple of markets and found one lovely shop, Earth Bound Creations, where we were able to buy a new diary, our fourth of the trip so far.

When the time came for the show we made our way back to the Temple of the Sacred Tooth Relic and to the Kandy Cultural Centre just beyond it. Our host met us there with our tickets and showed us to the seats he had managed to reserve for us, just one row back from the front. We realised that this was quite a coup as more people poured in to the theatre and scoured the reserved seats in the front row, only to troop to the back of the theatre. We were also provided with a leaflet briefly explaining what each of the dances were, this bore very little relation to the reality of what we were watching as far as we could tell so we sort of muddled our way through. The show was interesting and just the right length at an hour long. It’s definitey worth the 1000 Rupees each that we paid and we are glad that we went, you probably only need to go to one show to get your fill.

It culminated with some pretty impressive fire walking at which point the audience were encouraged to crowd around the tray of coals with flagrant disregard for health and safety. 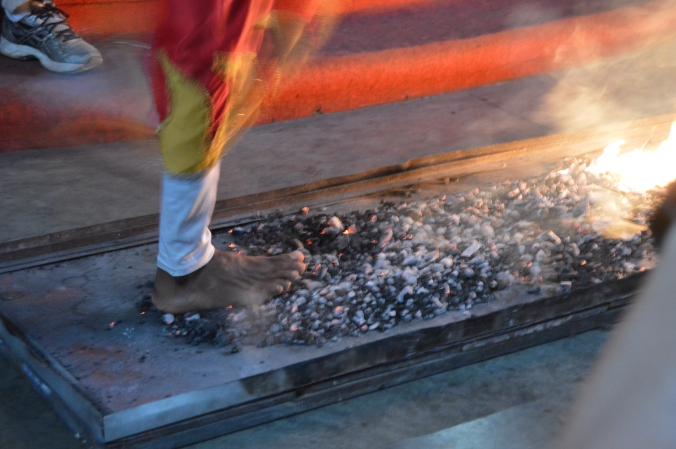 As you can probably tell, it was very difficult to get pictures of the show with all of the movement but James managed to capture a beautiful shot of the final display of fire eating. 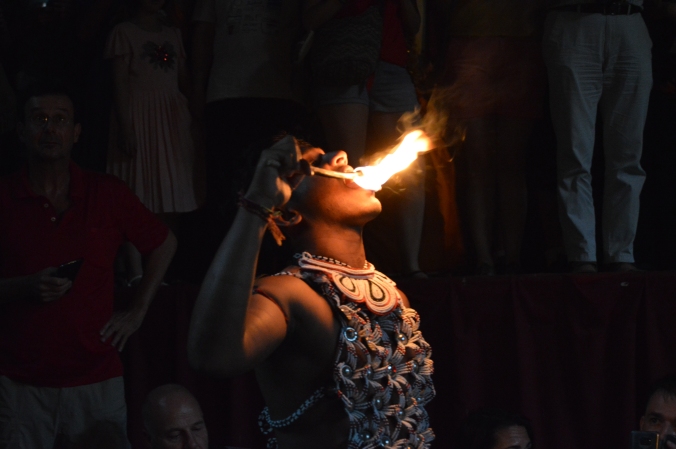 3 thoughts on “Lingering in train doorways from Ella to Kandy”