Our first bus journey in Sri Lanka was on a private bus. Every single bus in Sri Lanka is an old double windscreen Lanka Ashok Leyland but you can tell the difference between the state and private buses because the former are fairly non-descript red buses and the latter are usually painted retina-hurting neon colours, play loud Sri Lankan pop music and have Buddhist shrines that are lit up like Vegas slot machines. Ours had the added bonus of being decked out like an aquarium, complete with blue tinted windows and a ceiling wallpapered with exotic fish. 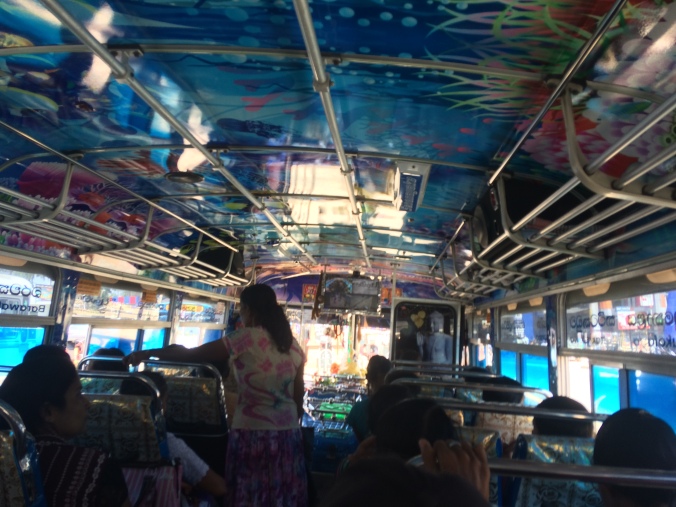 Public transport in Sri Lanka is very cheap and by far the best and most fun way to see the country, we have had a great time travelling on buses and trains. Those suffering from claustrophobia may struggle with the crowds on occasion but for us the organised chaos of it all has just added to the charm. We got to Embilipitiya in just over two hours for the bargain price of LKR75, that’s 35p in sterling, 48 cents in USD and 38 cents in Euro. In other words, really bloody cheap. We changed on to a second, plain government bus to take us to Uda Walawa or Uda Walawe, there doesn’t seem to be a consensus on spelling.

You may recall from the end of our last blog post that we were both suffering from some digestive discomfort. We were feeling pretty rough by the time we reached our guest house and ended up spending the afternoon napping. We had another excellent room; the shower was almost directly over the sink, which made for an interesting showering experience. 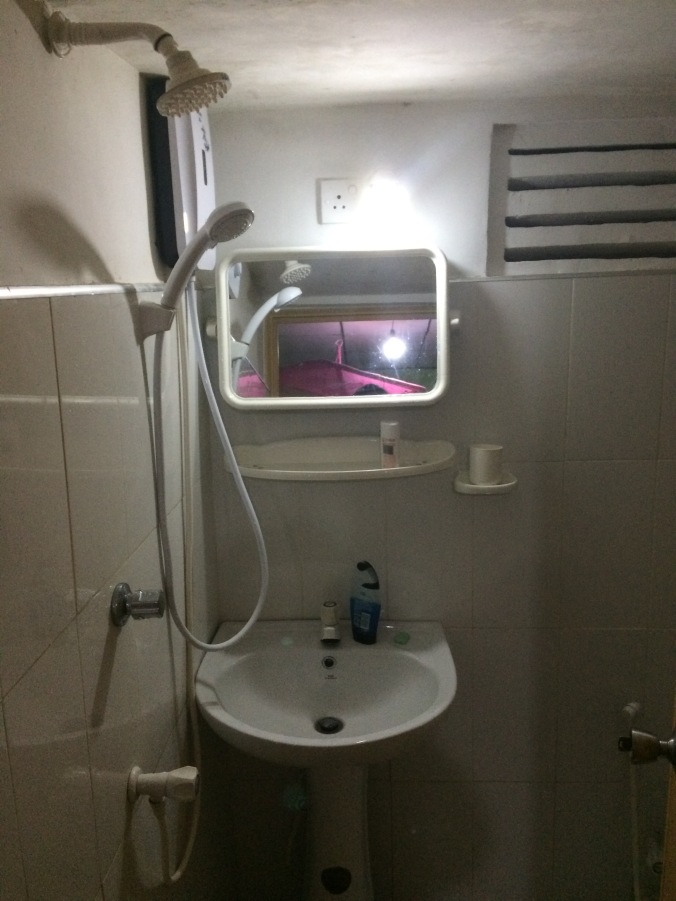 The double bed was absolutely huge but they had put a standard sized mosquito net around it. This meant that when employed, the net was so far stretched over the edges of the bed that it laid flat across at least a third of it. When we went to try and lie down it was rather like being mummified and we ended up using our bags to peg it as far away from us as possible. 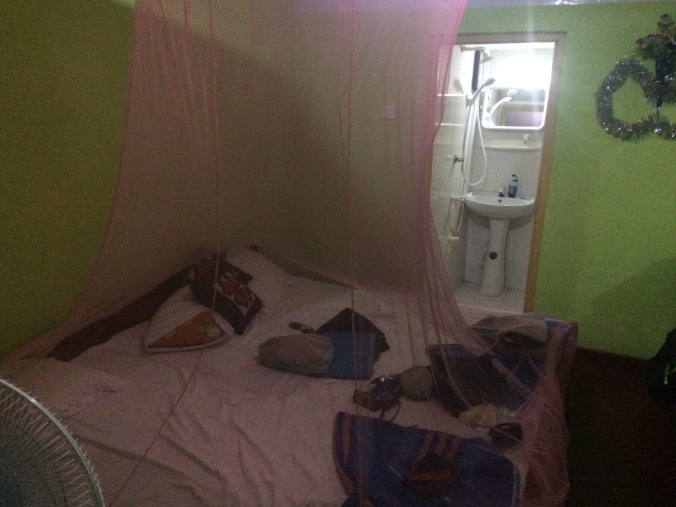 The startling green and pink décor was capped off with this truly terrifying poster. 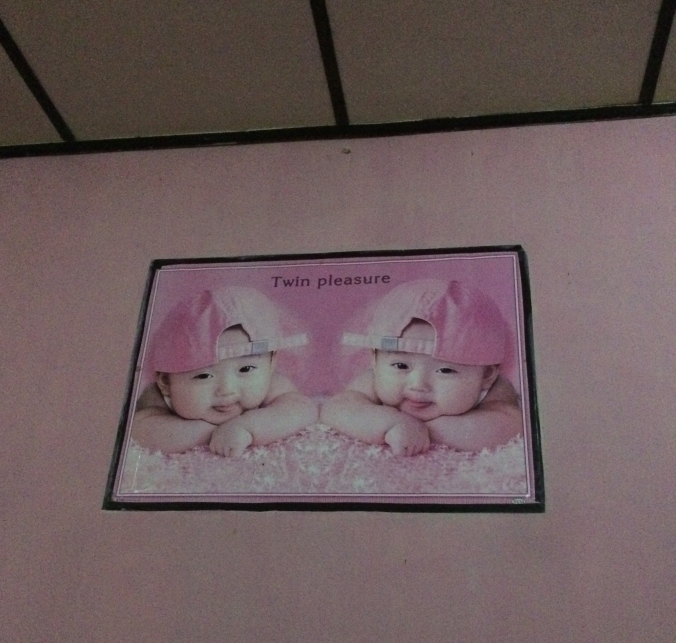 We did manage to rouse ourselves for a superb rice and curry dinner and chatted with our fellow lodgers, who would be with us on the safari the next morning.  The drive started at 5:30am without so much as a cup of tea to send us on our way. Our driver did at least pick up some crackers otherwise we would have expired long before the end of the drive. The real benefit to being up so early was that we got to watch an absolutely stunning sunrise over the park.

Uda Walawa is less busy than some parks, such as Yala, but you still need to be on your game and in the queue early. Even with our early start we still had a 30-minute wait at the gate before we got our tickets. Whilst we waited we observed this man, whose job appeared to be to sweep dirt around the dirt carpark. 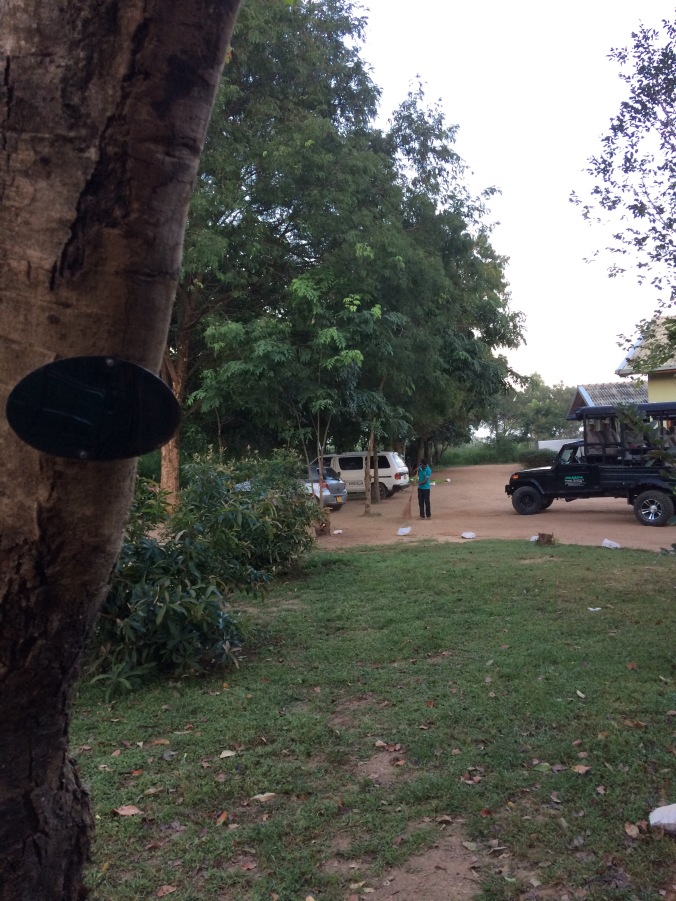 Once we were in the park it was a challenge to escape the multitude of other jeeps driving around and for the first couple of hours we were generally in the company of others. The big drawcard for Uda Walawa is the elephants but we will come on to those later, there is plenty of other stuff to see including a vast array of birdlife. The park is full of peacocks way up in the tops of trees. We didn’t even know that peacocks could fly well enough to reach the tops of trees but there they were, perched around every corner. 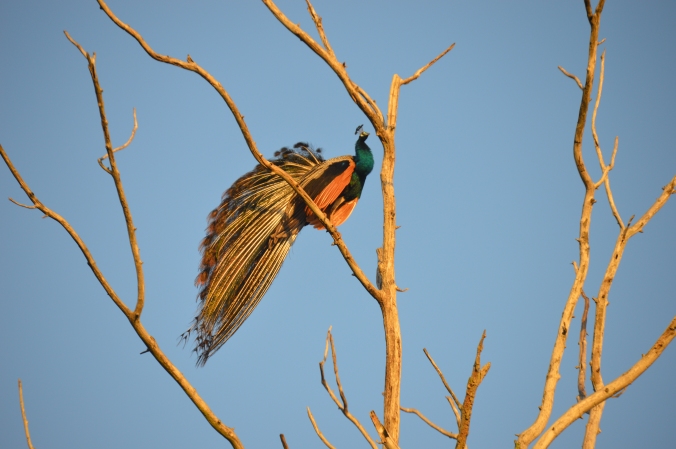 Some of our avian favourites were the bee-eaters which are very colourful and also inquisitive so we were able to get good and close to them. 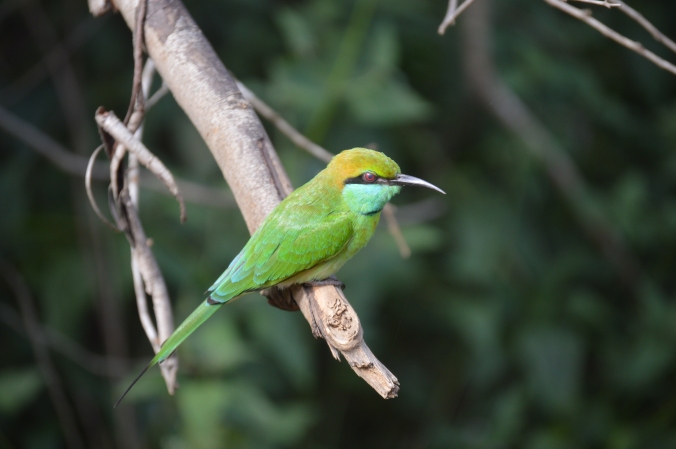 We saw plenty of other birds as well as crocodiles and buffalo, which were escaping the heat by submerging completely in waterholes save for their horns and providing an ideal resting place for passing egrets and herons. 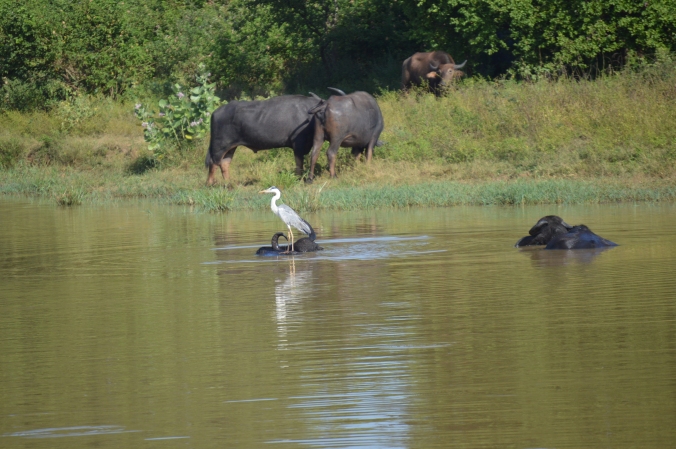 On to the main attraction. We’d seen plenty of elephants from a distance and a particular highlight was a large family group, who had cleverly situated themselves on a spit of land at least 500m away from the nearest camera, and one chap coming down for a morning drink. 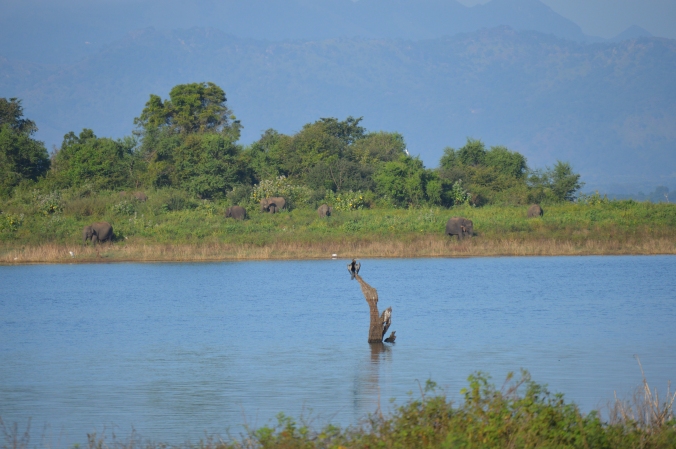 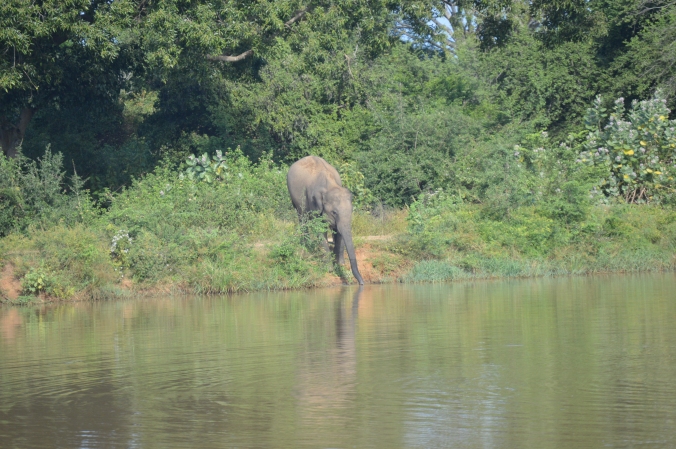 Sadly, one of the drivers had absolutely no qualms about driving straight up to this one and scaring him away in to the bush. At this point our driver really came in to his own and managed to find a couple of spots where there were absolutely no other jeeps and the elephants were so close to his side of the car that James’s smile took on a slightly nervous, fixed quality. 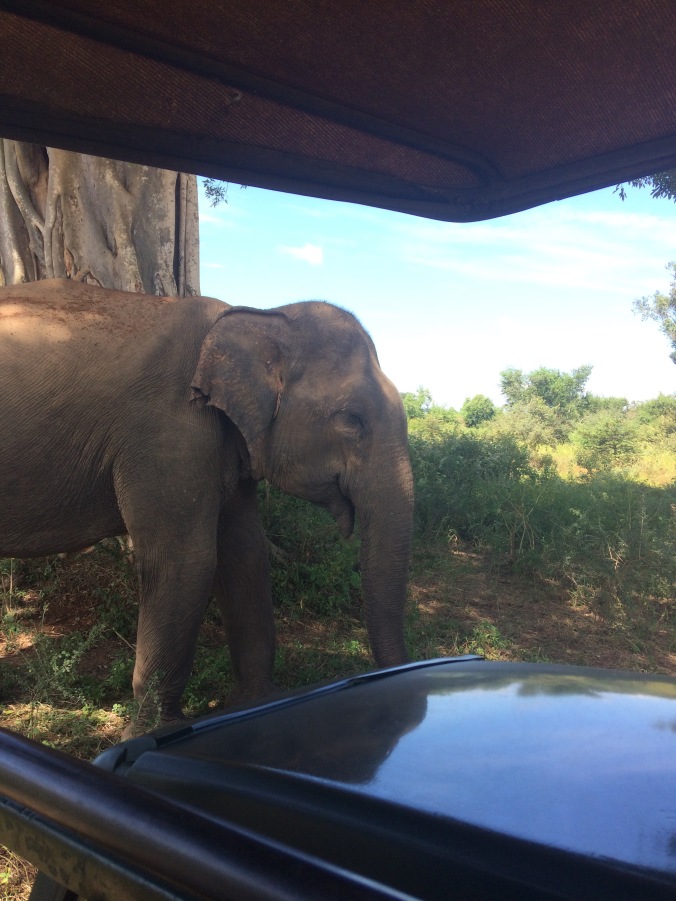 The next hour or so was taken up with finding small groups of elephant and enjoying having them all to ourselves. 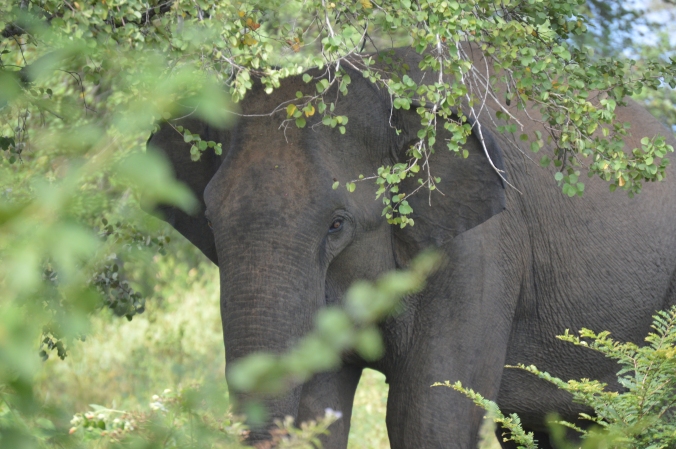 Our driver also furnished us with some fun elephant facts: Asian elephants are slightly smaller than African elephants and with animals of this size the difference is surprisingly noticeable, they also have smaller ears. We hadn’t seen any elephants with tusks and our first thought was that they had been removed to deter poachers. Tusks are actually a rarity in Asian elephants, they are only ever found on males and then infrequently. Their smaller size and lack of tusks has meant that Asian elephants have been deemed easier to “tame” and safer to ride, more on this practice in a later post.

Our final stop for the day was a large waterhole where a small family were literally rolling around in the water enjoying the cool on a very hot day. 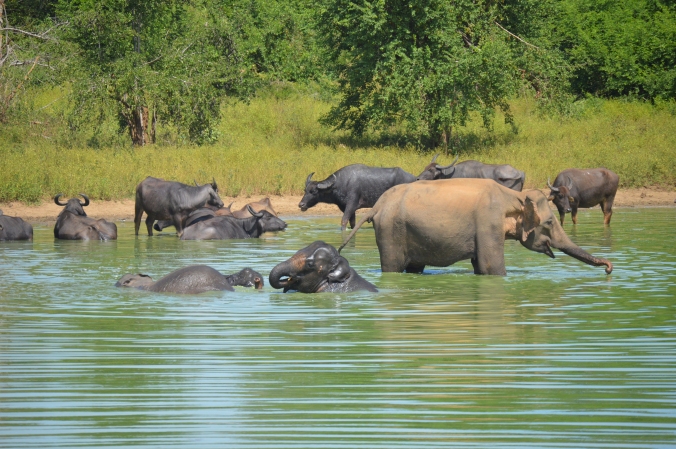 As we were about to leave we were given one last treat, a large bull elephant strolled out of the undergrowth right in front of the car and made his way down to the water for a wash. 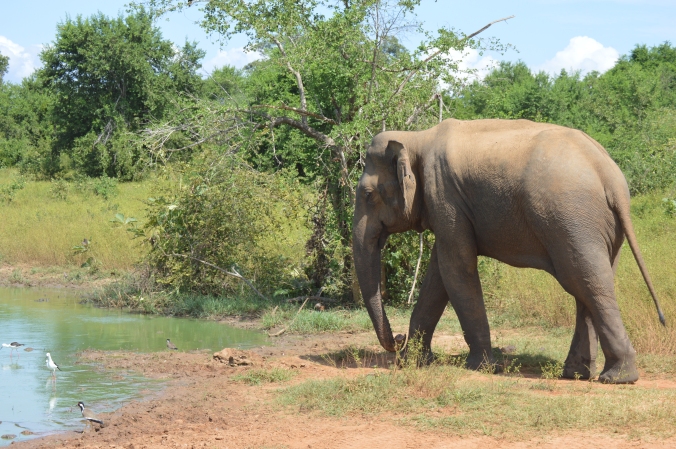 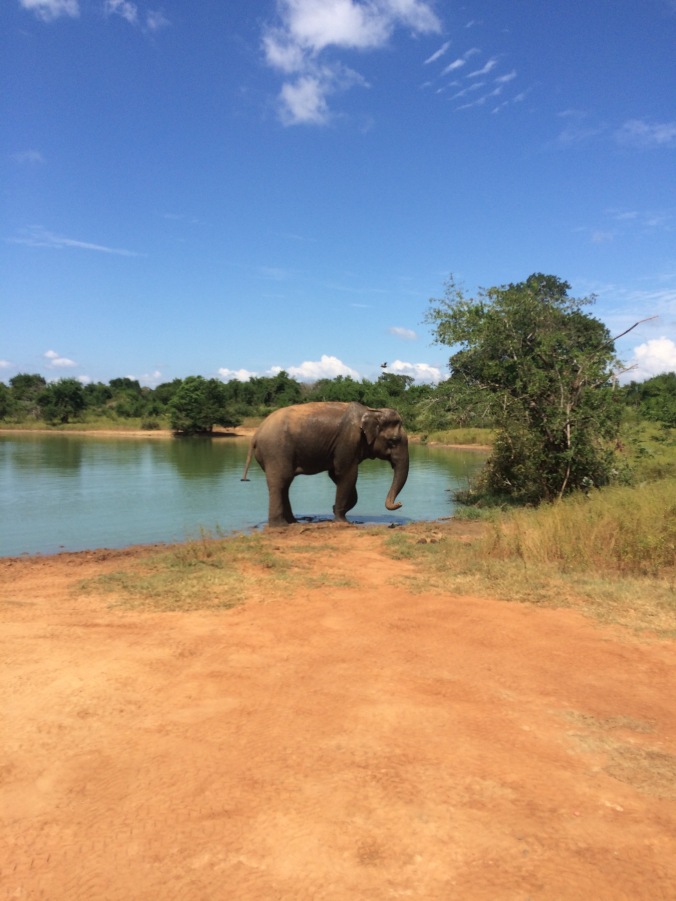 The entire safari, including park entrance, had cost us LKR4,000 each, or £20, plus a tip for the driver. For a good safari vehicle with only 6 passengers, park entrance and a wonderful elephant experience it was fantastic value for money and we would recommend our homestay, Enjoy Paradise Resort, for this reason, as they organised everything for us with their own safari car. The service is excellent and don’t be dissuaded when the owner tells you that he doesn’t like elephants, a statement that had the impressive effect of rendering Caro speechless; there is literally nothing to do in Uda Walawa other than look at elephants. The alternative to using your accommodation’s service is to wait at the gates of the park in the early hours and approach one of the many tour companies waiting there. Our way seemed much easier and we doubt we could have secured a better deal.

We got back to the homestay at about 11:30 and were ravenously hungry. This was just as well because we were presented with a carbohydrate feast; string hoppers, egg hoppers, plain roti, coconut roti, pancakes and finally a bowl of curry. Fortunately, being ill hadn’t impacted our appetites but it did make the prospect of another long bus journey rather daunting. We stiff upper lipped it and found ourselves standing on the side of the dusty road waiting for our bus to arrive with Yolanda, another English girl who had been on safari with us. It was extremely hot at the peak of the day and we ended up waiting about 30 minutes, which feels so much longer when all you have to do is stand and not think about feeling unwell. We were approached several times by people who wanted to give us tuk tuk rides or bearing offers such as “my friend is driving to Ella so you can go with him for 3000 rupees”, but we stood our ground. We are personal fans of the pop music on the bus but Yolanda absolutely loathed it and when the bus eventually pulled in and some excellent beats assailed us from out of the windows she rolled her eyes and resignedly stumped up the steps in to the already heaving bus.

It took about 5 minutes of jostling but the three of us eventually found seats. This bus was three abrest on one side of the narrow aisle and therefore quite snug. We ended up wedged in the six seats along the back with members of the same family sat either side of us. They were passing a bottle of coke between them, which they also offered to us and struck up the only conversations that those Sri Lankans with limited English can “Where you from? How long Sri Lanka? It’s very hot”. Honestly, they are the most friendly and helpful people and are determined to make you feel comfortable.

A bit further down the road, a group of 4 backbackers with more luggage each than we had combined clambered on to the bus and the place promptly became scene from a slapstick comedy with them knocking each other over and hitting seated passengers in the face with the shoes dangling from their backpacks before the ticket man came and sorted everyone out.

We parted ways with Yolanda at Welawaya bus station and started to search for a bus to Haputale, our final destination for the day. As ever there was someone happy to help out and he advised us that there wouldn’t be another bus for an hour and a half and that it would take a really long time when it did arrive. We were now wise to this tactic and said that we were happy to wait for the bus. He said he would help us find a cheap tuk tuk and asked what was the most we would be willing to pay. After two or three more rounds of us saying we would take the bus he eventually shrugged and, smiling a bit sheepishly, pointed to a bus nearby and told us that it left for Haputale in 15 minutes. Even the people who try to rip you off are nice!