The drive up to Mount Cook / Aoraki National Park is stunning. The road winds along the edge of the incredibly blue Lake Pukaki backed by mountains, it is breath taking. On our approach it looked as though the mountains had been superimposed on to the scenery it was so clear.

The village of Aoraki is there purely to serve the National Park and feels like a soulless ski town but would no doubt serve a purpose as somewhere to stay and we understand that it gets booked up pretty quickly. As campers, there is only one camping option in the National Park, at the DoC run White Horse campsite which is about 2km from Aoraki. The site is pretty busy with campervans and tents, but it did not feel overbearing and given the volume of people going through in a day the facilities were incredibly clean. We found ourselves a spot just off the main site away from any potential acoustic guitar playing, the desire for which seems to come out in people in such places. The very best thing about this campsite is your view from the tent.

We spent the afternoon sitting in the sun, reading and feeling very pleased with ourselves for winding up in such a fabulous place. We took a 5-minute leg stretch up to a monument commemorating those who had died in the national park which was very tastefully done and fit in perfectly with the surroundings. 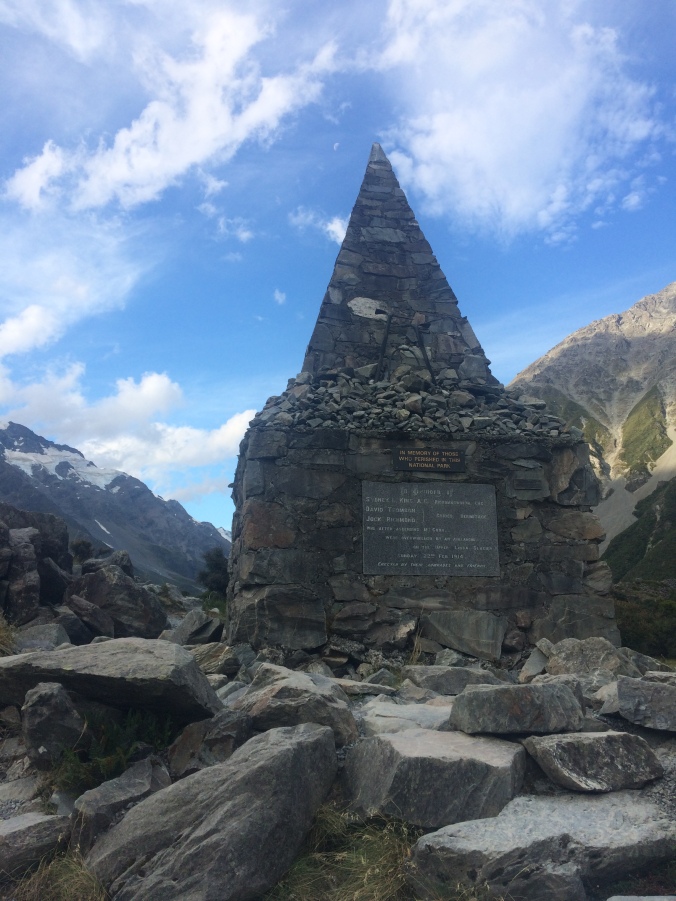 We rounded up the evening with some scenic yoga which was unembarrassedly photographed by a smiley Asian chap, the essential diary writing, a beautiful sunset and an early night ready for a few hours walking the next day.

We woke to heavy cloud and mist and could hardly see the peaks at all, so we took our time packing up and decided to do a couple of the shorter walks first in the hope that the mist would clear for the main event. The park has several short walks and we did the Blue Lakes, which are no longer blue, and the Tasman Glacier Lake walks. The lake is pretty cool with icebergs floating in it, but do bear in mind that it is glacier adjacent and therefore a delightful grey colour. 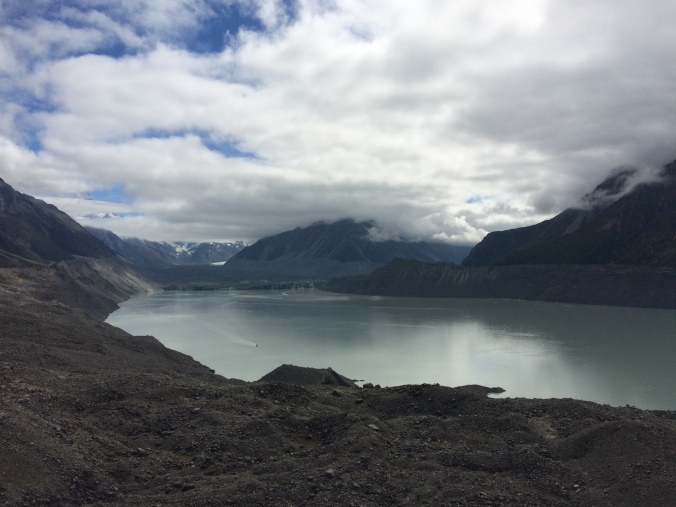 The two walks took about an hour altogether and as we made our way back to the car the clouds began to clear and our luck was in for the main walk we had come to do, the Hooker Valley track. The track was busy but you can find space to walk in peace and the views of the mountains and the glaciers are spectacular. Now, you may recall that we didn’t have a particularly high opinion of Franz Josef Glacier and we still maintain that glaciers in general are not particularly pretty up close however if you do want to see a glacier, go to Mount Cook, you won’t regret it for a second.

Let’s all take a moment to appreciate James’s hair.

Caro managed to spot a mini avalanche high up on one of the glaciers while we were winding our way along the track. After several months of practice, we have managed to nail the technique of crossing swing bridges without looking or feeling like a drunk gazelle; it requires a combination of long strides and bouncing on the balls of your feet.

The track ends at the glacier lake with the Mount Cook looming above it. The mountain itself is as beautiful as ever but this close up you can also see the damage caused by the glacier.

We realised that we had missed a trick as a good number of people were sunbathing by the lake and a couple of brave souls were actually wading out in to the water within a few metres of the chilly looking icebergs. 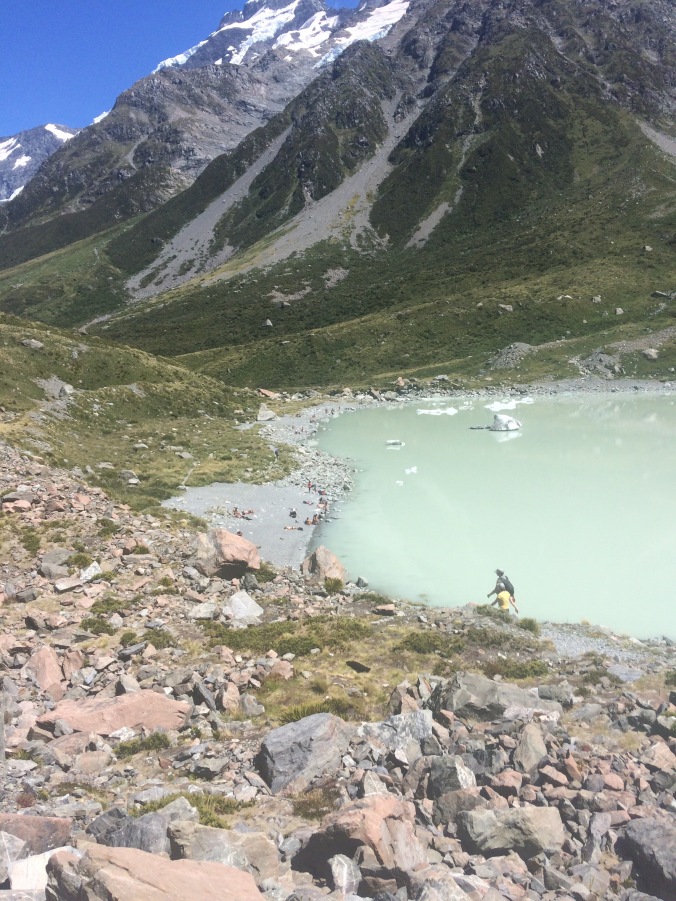 The return journey is equally beautiful with Mount Cook at your back and gorgeous green slopes and the distant views of lake Pukaki ahead of you. 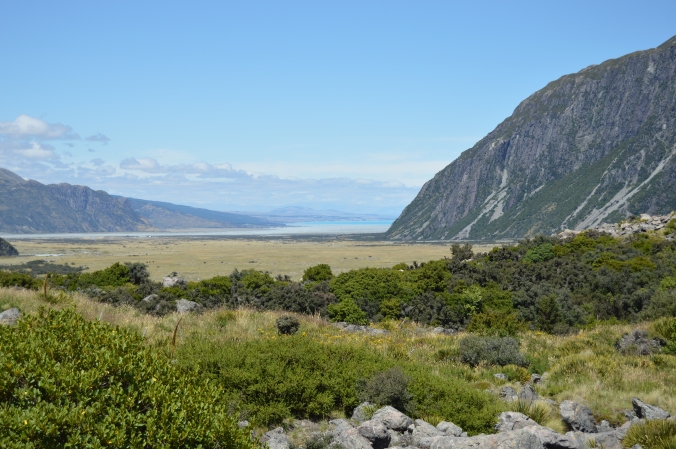 We took so many photos on this walk so here is one more just for luck. 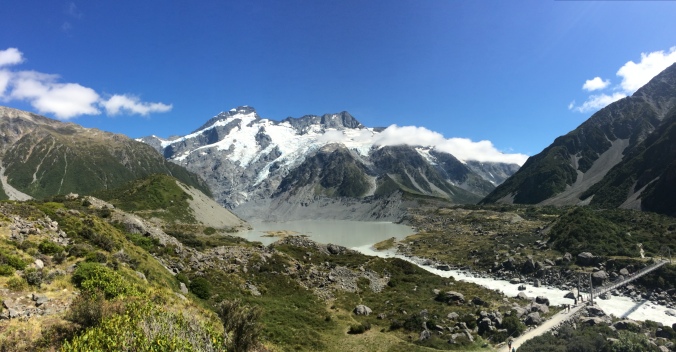 By the time we had retraced our steps back to the car it was a glorious day and we enjoyed lunch and cup of tea in the sunshine with the mountains and glaciers as a backdrop. Our trip so far has certainly resulted in tea and sandwiches in some pretty stunning locations 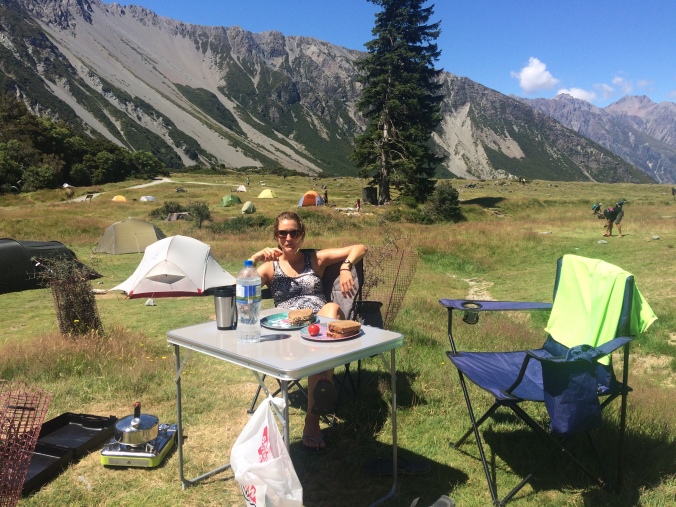 We were in to the final few days of our trip and were heading back to the coast and, eventually, Christchurch. Looking back along Lake Pukaki it seemed even bluer than before and as we made our way along the southern end of the lake we were treated to one of the most beautiful views of the day. A picture may say a thousand words but you would never be able to sum up the pure beauty of Mount Cook in so few as a thousand.

We carried on east, driving across Mackenzie country until we reached the rather odd town of Tekapo which appeared to be completely tourist focussed and had very little of the nice feeling of a small town. It did however have one tourist attraction just this side of crazy; an excellent dog statue dedicated to all of the sheep dogs which have helped make Mackenzie country farmable. 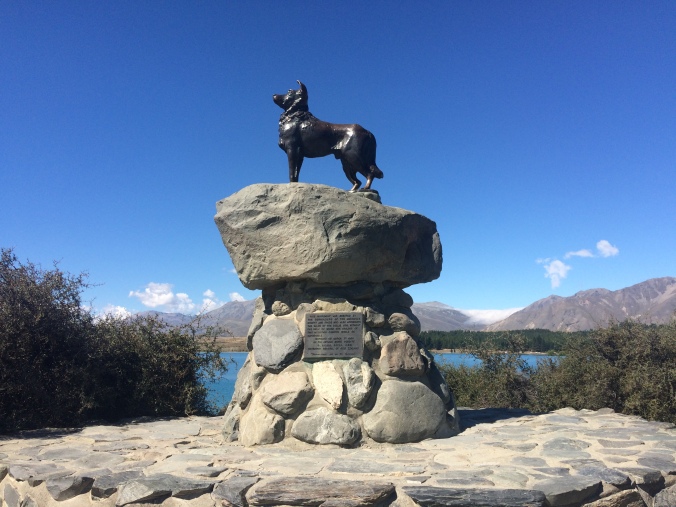 We spent the night in a small town called Fairlie, where we started talking with an American couple who were just setting out on their tour of New Zealand. It only seemed right that we gift them Caro’s extensively annotated map which has been our guide for the last month and will hopefully help them to enjoy the South Island as much as we have.