The very un-Bavarian Bavarian motel had everything we needed; a powerful hot shower, a comfortable bed and our own cooking facilities allowing us to keep watching Harry Potter in the morning whilst also indulging in pancakes and taking full advantage of our rapidly dwindling calorie deficit. 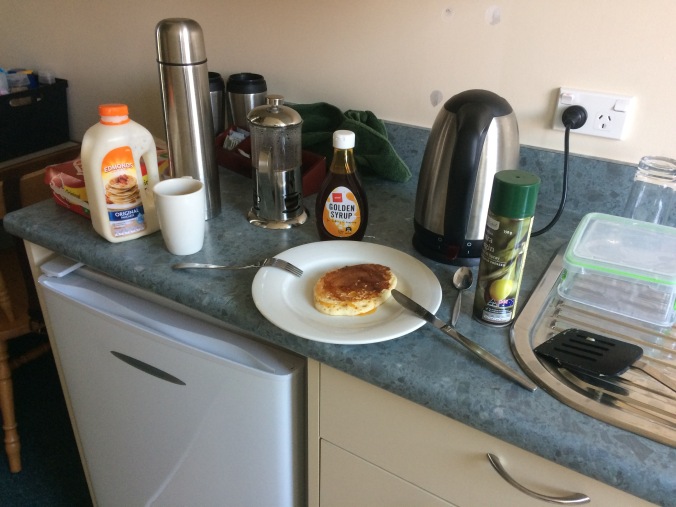 Upon leaving Invercargill, we spent the next 3 days bouncing around the south-east corner of the Island, with the eventual goal of reaching Mount Cook. Whilst these three days weren’t entirely unplanned, they didn’t have the same sense of purpose that has characterised our New Zealand trip and, at the time, didn’t feel quite as rewarding. That being said, we drove through some beautiful countryside, had glorious weather and still had our fair share of interesting experiences, particularly when we look back on them collectively.  The first bonus was that we finally managed to will the shit car’s radio in to action and listened to the delights of Breeze FM and other stations which churned out classic after classic as we drove along with Caro, on something of a syrup driven sugar high, singing along at the top of her lungs.

One of our more ill-fated adventures resulted from a snap decision detour to visit Waipori Falls, with the vague idea that it would probably be a nice spot to stop for lunch. The diversion took slightly longer than expected along gravel tracks designed for logging trucks and with which our car was none-to-pleased. We ploughed on and reached the falls carpark, to find that we had selected a hydroelectric plant adjacent picnic area.

Not to be deterred we stomped along the walking track to the falls only to arrive at the least impressive waterfalls in New Zealand which can only just be glimpsed through a gap in the trees.

All in all, the entire detour was comically crap and we still hadn’t had lunch.

Our first campsite was at Millers Flat on the banks of the Clutha River and was fairly uninspiring in most respects save for two. The first came in the form of a gentleman who James delightfully christened Half-Dead Ian. The owners of the campsite were out when we arrived and a sign on the door directed us to a permanent resident by the name of Ian who would be happy to be check us in. Ian looked and breathed like he was not long for this world and got in to his car to travel the 50 metres to show us to our camping spot.

The second joy came the following morning when James, in pursuit of coffee, was pleased to discover that the kitchen had an instant boiling water tap. His high spirits were to be very short-lived when he discovered that you had to fill the boiler with water and switch it on every time you wanted hot water. So, in essence, they had created a large and unsightly wall mounted kettle that took 4 times as long to boil.

Our drive through Central Otago the next day was actually very rewarding; the road between Millers Flat and Alexandra is dotted with fruit stalls and we pulled in to buy some excellent fresh fruit for on our way through. We also got our first real view of the impact of the drought that we had heard so much about; the landscape here was so much drier than anything we had seen so far and you could easily think you were in a desert with the rocky outcrops and tufts of grass.

Every so often we came across vibrant green fields where the farmers had relented and turned the sprinklers on, but all around remained arid. Whilst we had been fairly unimpressed by the torrential rain we had experienced previously, it was clear that rain in any quantity would be a blessing here. 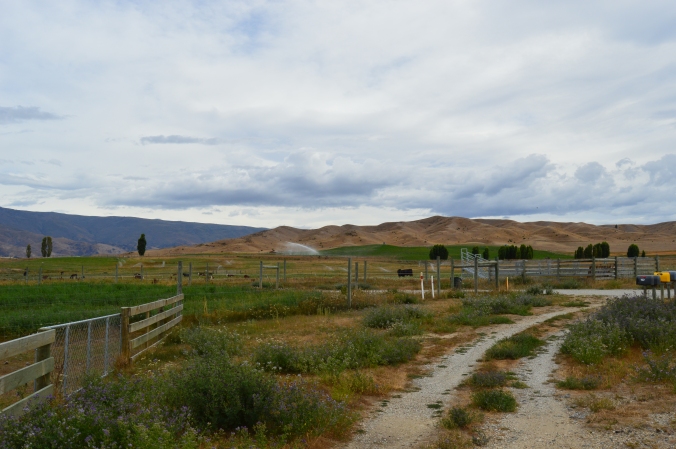 The first main town we came across was Alexandra where, eschewing the standard clock tower approach, an enormous clock has been mounted on to the hillside because what’s life without a little whimsy?

A few kilometres down the road is the historic town of Clyde, which though pretty and well renovated is still only 150 years old and we have found ourselves craving something truly old. One thing that Clyde did draw our attention to is that many of the towns in New Zealand, particularly the smaller towns (Clyde has a population of around 1,000) play host to Masonic lodges, often in the grandest buildings in town. This struck us as interesting and we noted to look in to why this might be, although it hasn’t made it off the to do list yet.

We have said before that we hadn’t seen many sheep in our time in New Zeeland, and we had been expecting to see a lot, but it turns out that they are all hiding in Central Otago. We saw absolutely thousands as we made our way back towards the coast and we succeeded in finding a good spot for lunch in the middle of a beautiful valley surrounded by sheep and cattle. It made a refreshing change from our usual power station/substation/industrial site spots. We were still parked on the side of a busy road of course.

We hit the coast and went to visit the Moeraki Boulders, these are large and perfectly round boulders scattered across the beach which are pretty cool but also a big tourist draw, so you do have to share them with the crowds.

After our busy day of sitting we rewarded ourselves with enormous ice creams, which we ate looking out over the sea, before making our way to Herbert Forest Camp for the night. We absolutely loved this campsite; it was wonderfully peaceful, surrounded by woodland and it felt like good old-fashioned camping, with the added bonus of running water. The whole experience was capped off by the array of farm animals surrounding, and indeed strolling through, the campsite. Unfortunately, the drought has meant that the cows are costing more to feed than they are worth and the farmer who owns the site is having to sell them off.

Our last stop on the coast before cutting inland to Mount Cook was Oamaru and we spent an excellent couple of hours strolling around the old town, admiring the Victorian warehouses which now house shops and museums although some still serve their original purpose, mainly processing wool. The streets had a bright, festive feel about it and looked as though it had been set up for a jubilee street party.

Dipping in and out of the old warehouses yielded some fabulous treasure troves; a second hand bookshop entirely dedicated to adventuring or a shop entirely stocked by the work of an 88 year old woman who lovingly handmade each item of children’s clothing and hand bound each book, we looked for one big enough to serve as a diary but she can’t make those anymore because they are too heavy for her to handle. We ended up in a storage area full of old fairground games and penny farthings with tricycles and carousel horses hung from the roof.

The town is also host to Steampunk HQ, which we didn’t go in to but it has spread beyond the walls of its Victorian warehouse and you come across various metal contraptions around town, naturally James got a picture on the tractor/tank.

On our way back inland, stopping at some Maori rock art at Timaru as it was literally on the side of the road that we were driving along. Most of it had been removed to a museum so you could look at drawings of what the drawings had looked like, which seemed to defeat the point entirely. Between Timaru and Twizel we officially entered Richie McCaw country, and boy are they proud of it, we had to stop and look again at a sign on the side of the road which declared that the All Blacks are “Richie McCawesome” and the town of Kurow has taken things even further and are fundraising for a statue.

Returning to form, we had lunch next to a hydro-electric damn but it was quite a pretty spot. In defence of our continued picnicking next to energy generation sites, they do tend to have parking.

The valley we were driving through actually has 3 dams which you pass on the way north to Mount Cook National Park, the engineering is incredible and has created a beautiful scenic drive. The dams have also supplied extensive irrigation to the farms of the valley and we passed from the dry arid lands, in to lush and heavily irrigated farmland on the drive north to Twizel and Mount Cook. 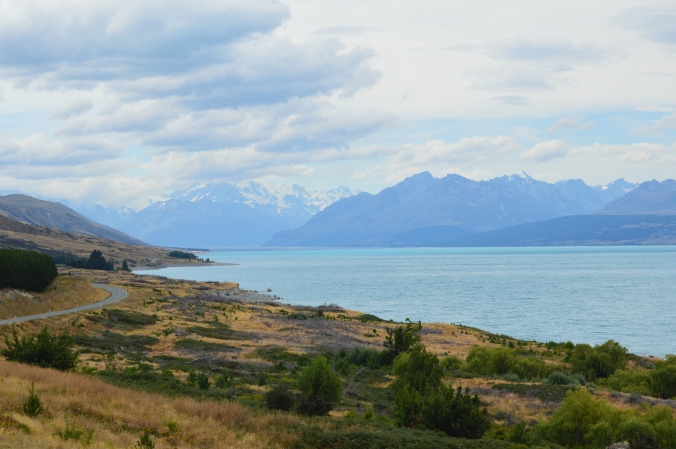