After two days of very little exercise and poor weather we were both feeling a bit cabin feverish and decided that the best thing to do would be to go for a run. So we found ourselves back in Wanaka, far sooner that we had ever intended, limbering up for a jog around the lake. Surprisingly, the 7km didn’t kill us and was just the antidote that we needed to throw off our lethargy.

Thus energised, we huddled on the curb outside the Wanaka branch of Bank of New Zealand to use their free wifi and get our next blog post up.

Glenorchy was our final destination for the day and this necessitated a return to Queenstown. Not willing to brave those particular delights again so soon, we took our time on the journey there. This was the second time that we had crossed the Crown Range Road but the first time that we were doing so in the dry and could therefore appreciate its far-reaching views properly. 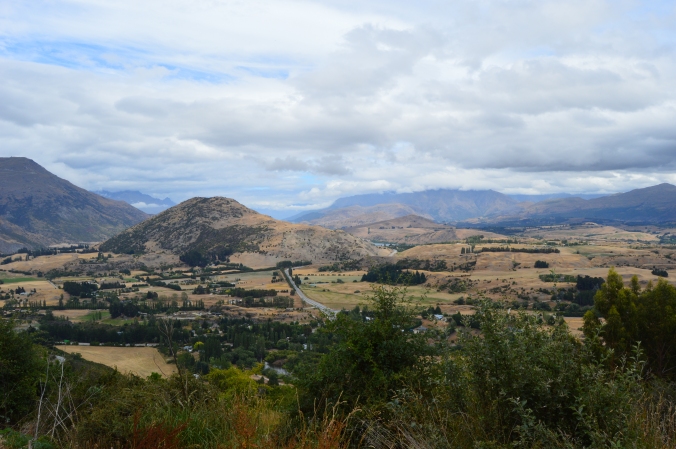 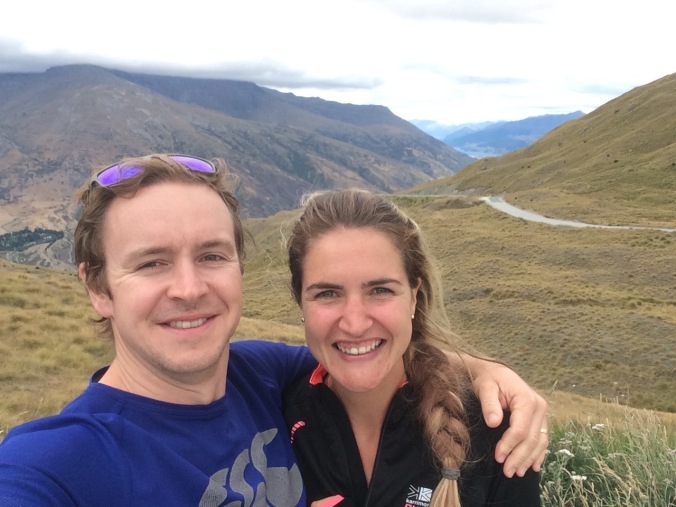 We descended to the plain and took a detour to the small town of Arrowtown, about 20km outside of Queenstown. Arrowtown makes for a nice antidote to the high adrenalin, adventure focussed towns around it. It’s still a tourist magnet but more so for it’s pretty streets, shops and restaurants, all of which have a kind of pseudo-gentility and cuteness. In large doses it would be nauseating but for an hour or so it is really quite lovely. 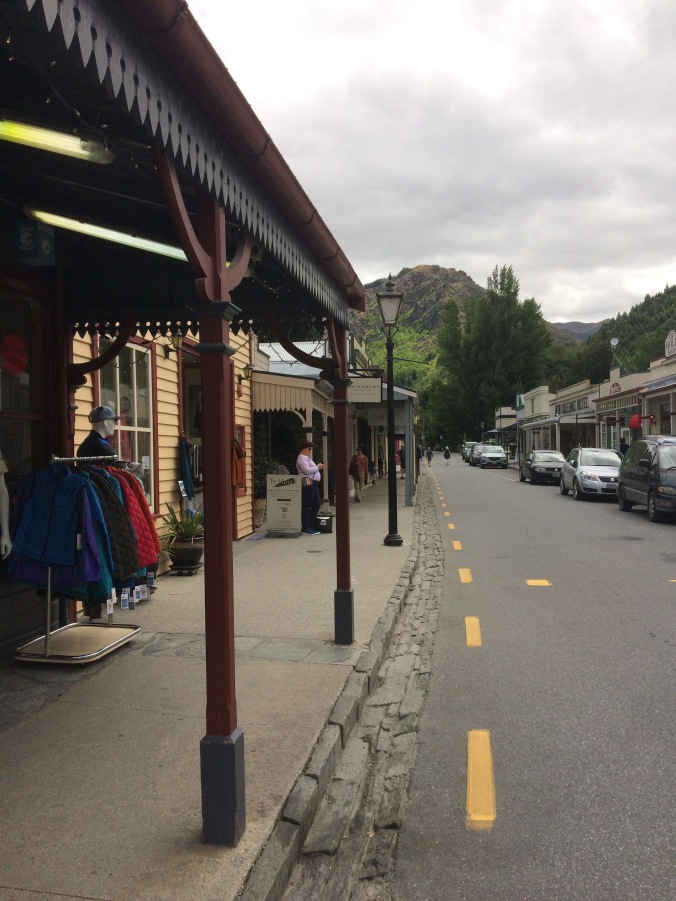 Arrowtown is also the perfect remedy for the homesick Brit abroad as, in the space of about a square kilometre, we came across all of the following streets:

Having had our fill of cute we made our way back through Queenstown (there was still a queue at Fergburger) and swiftly out the other side along the edge of Lake Watipu towards Glenorchy. You may have noticed that we have no great love for Queenstown but we would still absolutely, 100%, unequivocally and with the greatest ardour, insist that you must go. Just beyond the fringes of town, as you shake off the last of the extreme sports shops, you are presented with kilometre after kilometre of heavenly views. 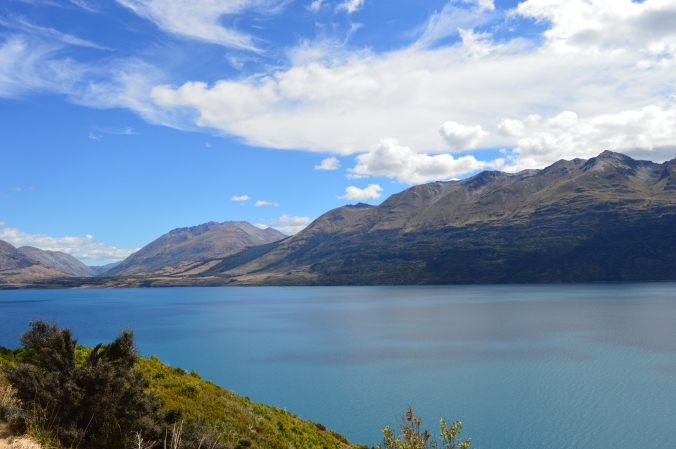 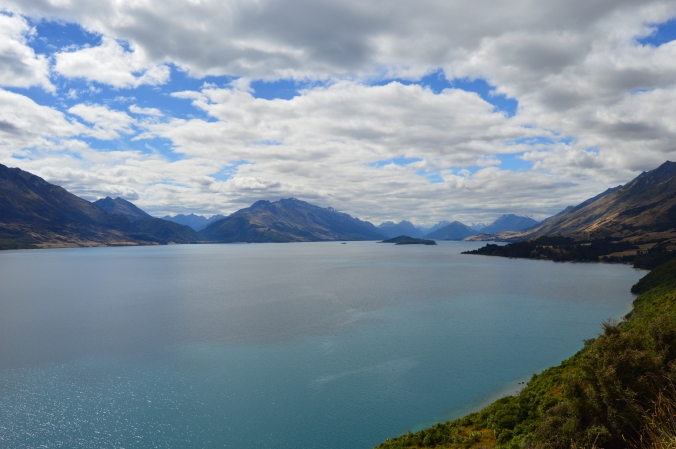 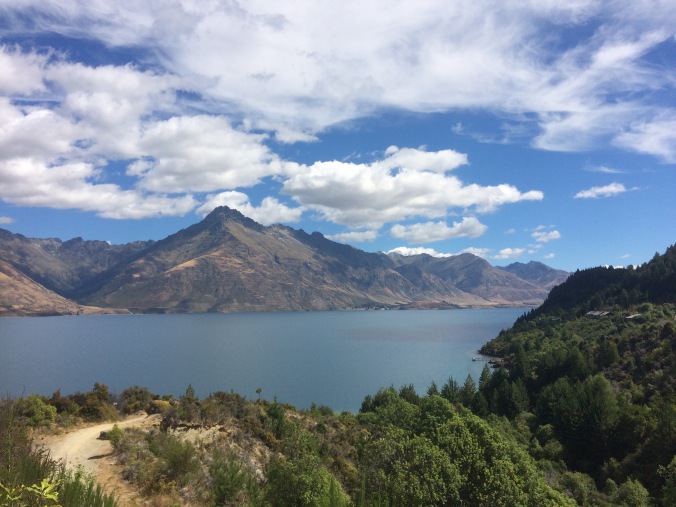 Our pitch for the night was Mrs Woolley’s Camp, which isn’t actually as tacky as the name suggests and it had hot showers, which we had not had for 3 days. Most importantly, we could not fault the surroundings.

Our main purpose in being in Glenorchy was to tackle day one of another Great Walk, the Routeburn Track in Fiordland National Park, and we were up bright and early to get our parking spot. Our morning was a bit fraught. Any couple who travels together will tell you that eventually you get on each other’s nerves and this was one of those mornings, set off by the coolbox of all things. By this point, we hadn’t spent more than an hour or so apart in 3 ½ months and the occasional niggles were starting to feel a bit persistent. Fortunately, we have also learned in that time not to seethe and that talking will often solve the problem. Nonetheless, these conversations are not a huge amount of fun and we were rather subdued on our drive to the track.

As we were getting ourselves organised in the car park we were joined by three women who were preparing to run the track, not something that is particularly unusual in New Zealand but will be pertinent once you read what the first day of the Routeburn actually entails. The beginning is actually fairly benign, there are some spells of uphill but interspersed with large section of flat and we completed the first 6.5km of the walk in 80 minutes, winding our way through the forest with fleeting views out through the vegetation on to the mountains around. 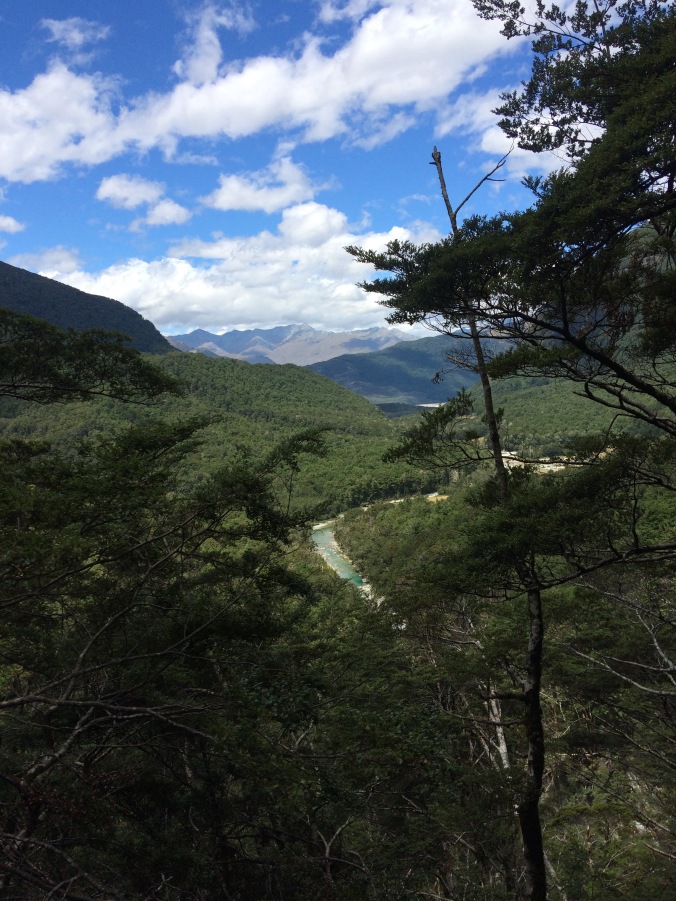 Our track crossed several tributaries until we reached the main river, which is lovely. 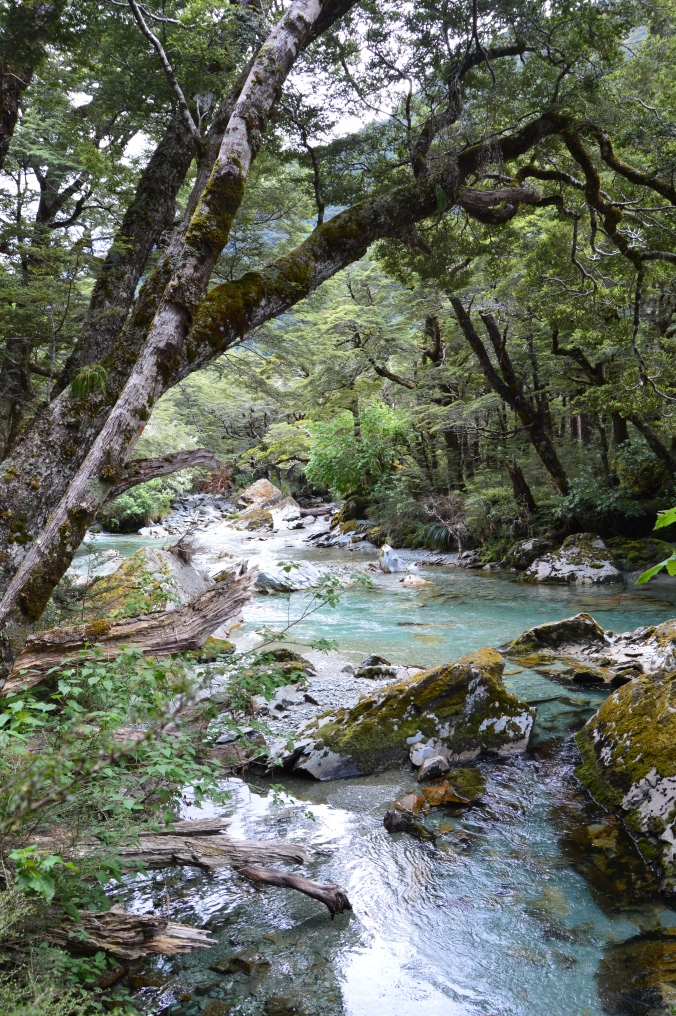 The track was reasonably busy but we had plenty of peace and quiet to listen to the bird life which was particularly abundant and we saw an array of little birds we had not seen before. The presence of birdlife varies hugely across different parts of New Zealand and is a highly contentious issue with locals. The birds are being decimated by introduced predators such as stoats and rats and, aside from trapping, the only available large-scale solution is a bait based poison called 1080 which is usually air dropped and is non-specific, so it kills everything that consumes it, including your pet dog. This is where the contention comes in; for and against the use of 1080. We know very little about it aside from what we have been told and would strongly advise against starting a 1080 conversation unless you are clear on your facts and are willing to piss people off. All we know is that it was nice to hear and see some birds. Caro continued her attempts to capture a fantail in action with greater success than last time although still not ideal. 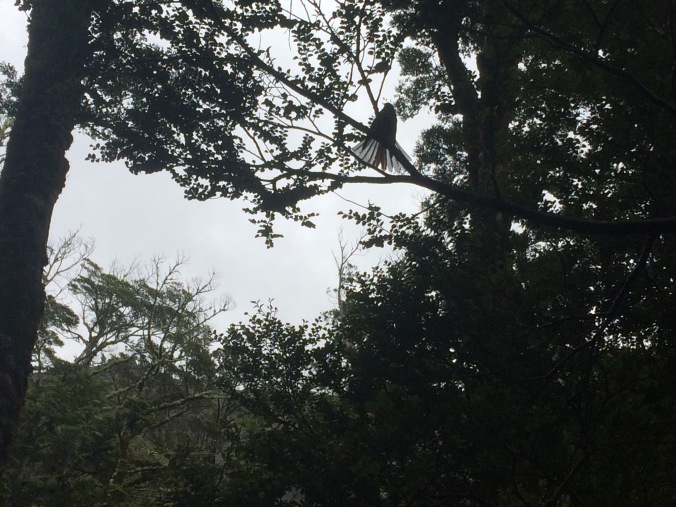 The first potential overnight stop on the track is the Routeburn Flats hut; stopping here would make for a very easy day’s walk at either end of the trail and so unlikely to appeal to many, but it does have the benefit of an astonishing setting in the valley with the flats extending out in front before rising to epic views of the mountains.

This first section had been easy going, and we braced ourselves for what we knew was a fairly steep climb of about 300m over 2.3km up to Routeburn Falls Hut where most people would stop for the first night and where we, fools that we are, would be reaching our half way and turning around point. James tends to stomp off on the slopes and walk until he cannot breathe and Caro does the exact opposite, taking her time and stopping regularly, eventually we meet up with very red faces.

About half way up the climb, a landslip has cleared the surrounding forest revealing a gorgeous panoramic view of the two valleys and this alone makes the torturous climb worthwhile.

After crossing a few more swing bridges and climbing even more steps we made it to 1000 metres above sea level and the Routeburn Falls Hut. Having achieved this feat we had to climb even higher to get a look at the falls themselves.

They are pretty but not what we were there for, you have to turn around for the view.

Please note, that valley that you can see in this picture, that’s the one we’ve just climbed up from in about 45 minutes and the reason that we now slumped down where we stood to catch our breath and have some lunch. Having been sweating minutes earlier, the cool air and breeze soon gave us chills and we quickly donned our backpacks after lunch and made our way back down.

The walk down was far easier than the way up and we were able to appreciate the views up through the trees without the daunting aspect of a steep climb ahead of us. 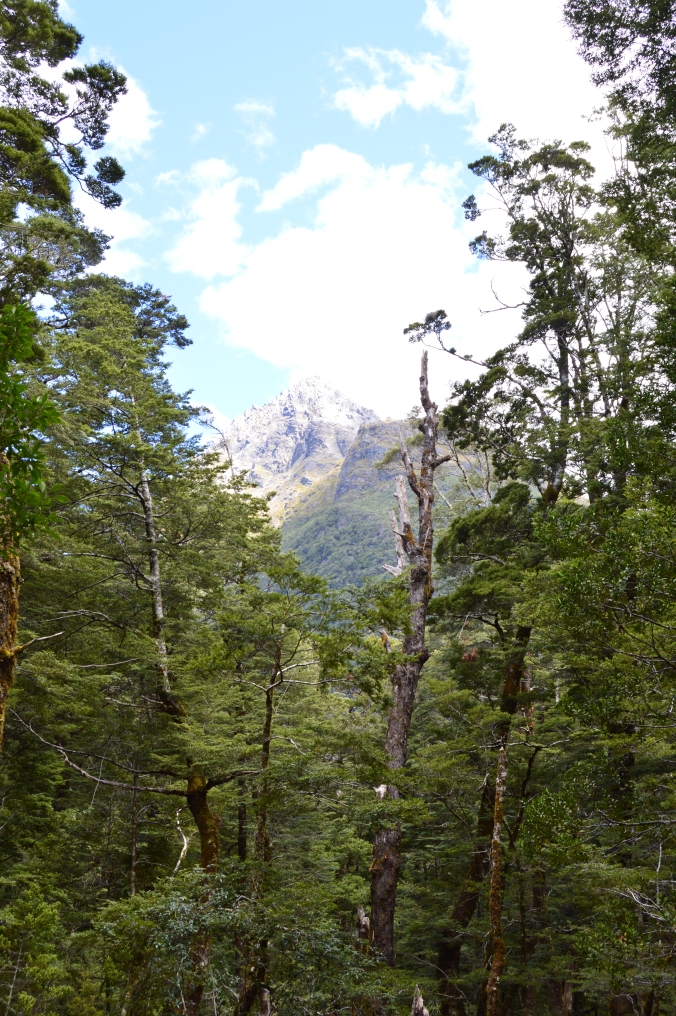 James spotted a tiny purple butterfly which we later learned was a Boulder Copper, by way of congratulations Caro turned around, held up her hand and said “Butterflive!” The fact that James actually responded by high fiving shows just how much time we have spent solely in each other’s company.

About 30 minutes before the end of the trail there is an option to do a nature walk which takes you down an adjacent track. We fancied a different route and thought we might learn something so plunged on. To be honest, we’re not sure you can call a walk with a couple of information boards a nature walk and it included a particularly unwanted uphill climb at the end, so we probably should have given it a miss. Nonetheless we can definitely say that we have seen all that the first day of the Routeburn Track has to offer and, more importantly, our gripes from the morning were entirely forgotten. 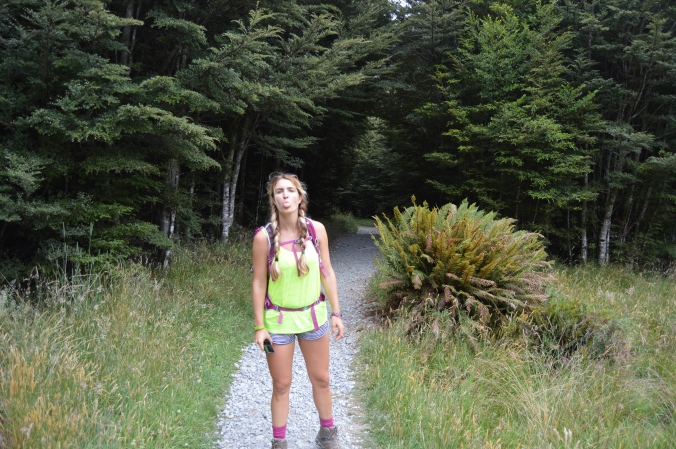 As we were getting back in to the car the three runners returned to the carpark; they had set off before us and we didn’t see them once on the track, we can therefore only conclude that they had gone even further up the Routeburn Track than we had (and it keeps going uphill) and then made it back shortly after us. So, they ran for at least two and a half hours up a hill, Kiwis are mental.

We made what we hoped would be our final stop in Queenstown for fuel and ice creams and started to think about where we would stop for the night.  You’d think that after our walk we may want to go somewhere with a few home comforts, hot showers perhaps. Not a bit of it; our excellent app, CamperMate, showed a free site in the centre of Lumsden with excellent reviews. It also sounded just a touch crazy, so we made a beeline for it and what a wonderful decision that turned out to be. Stay tuned folks.