On first appearance, Greymouth isn’t anything particularly special and was simply going to serve as a place to buy some new flip flops; James’s 2 dollar ones were giving up the ghost. However, we soon found that it was a lovely town for a leg stretch with some quirky shops and cafes and a dose of our favourite street art. 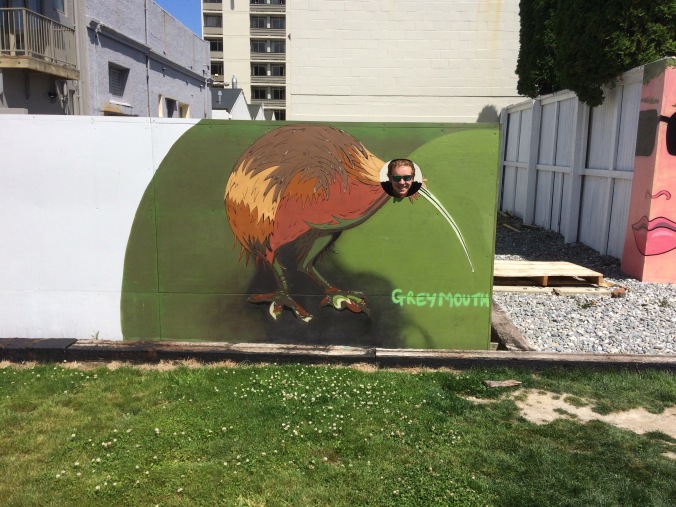 We stocked up on food, including the obligatory ice creams, and set off towards Arthur’s Pass National Park where we intended to camp before tackling some of the walks the next day. We took the scenic drive because it went through the town of Moana, and Caro took childish delight in stopping somewhere that was also the name of an animated movie. It turned out to be an excellent decision as the town is located on the shore of stunning Lake Brunner, where we spent a couple of happy hours laying in the sun and drinking tea, which we have consumed in copious volumes since dry January came in to effect.

Caro is rather like a lizard and, once settled in sunshine, it is difficult to encourage her out of it however she did climb back in to the car once sufficiently warmed through and we hit the road towards Arthur’s Pass along the Otira Highway, a gorgeous stretch of road through increasingly dramatic scenery. 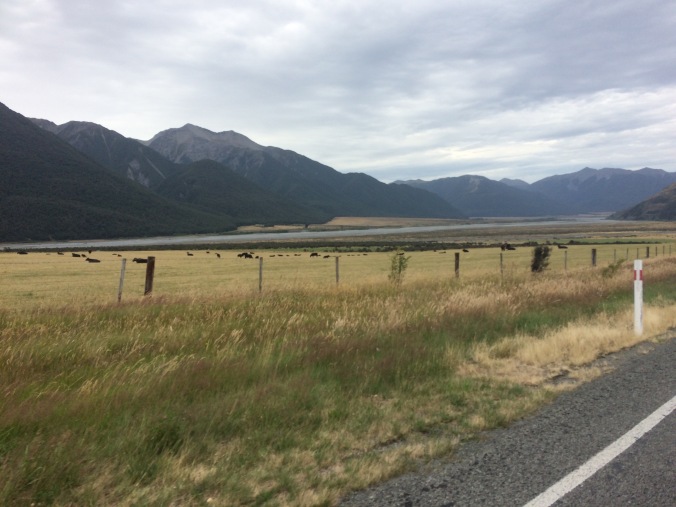 Our detour to Moana meant that time was creeping on and we bypassed the many viewpoints on the road, agreeing to stop at them on our way back to the west coast the following day. The drive was a picturesque one nonetheless, with the mountainside dotted with blazes on red, where the Pohutukawa was still in flower. It had past its prime at this point so we could only imagine how gorgeous it would be in full bloom across the mountainside. 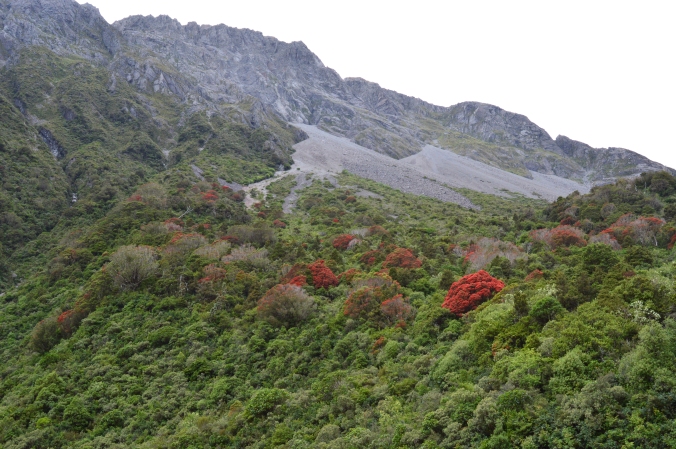 We made a quick stop at the visitor centre to plan our walks and to top up our drinking water before carrying on east, beyond the main village of Arthur’s Pass, to a free campsite on the edge of Lake Pearson. It was a decidedly average spot with water frontage and mountainous landscape all round. 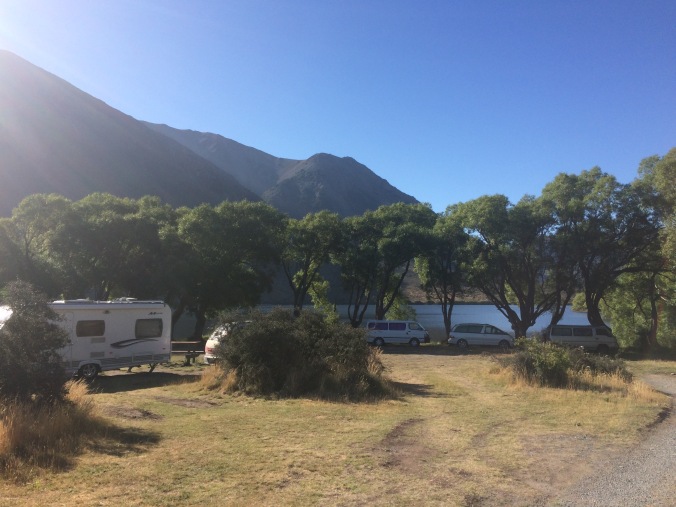 Unfortunately, the sandflies invaded our idyll as the sun was setting and we spent a large part of the evening sat in the car. Honestly, this wasn’t too much of a burden as it was starting to get pretty damn nippy outside. Sandflies are guaranteed anywhere in Arthur’s Pass so you have to suck it up if you want to visit, and you should, it’s breathtaking. Our campsite had relatively few of the little blighters compared to others in the area, so we would definitely recommend it as the best spot. Also, it has a very picturesque long drop. 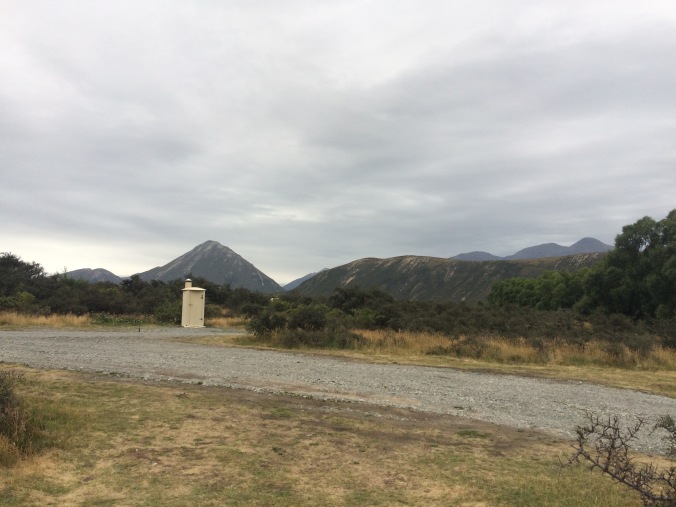 We packed up fairly quickly the following morning but did have time for Caro to make friends with the local ducks, one in particular which she originally named Arthur and then rechristened to Martha of Arthur’s Pass. 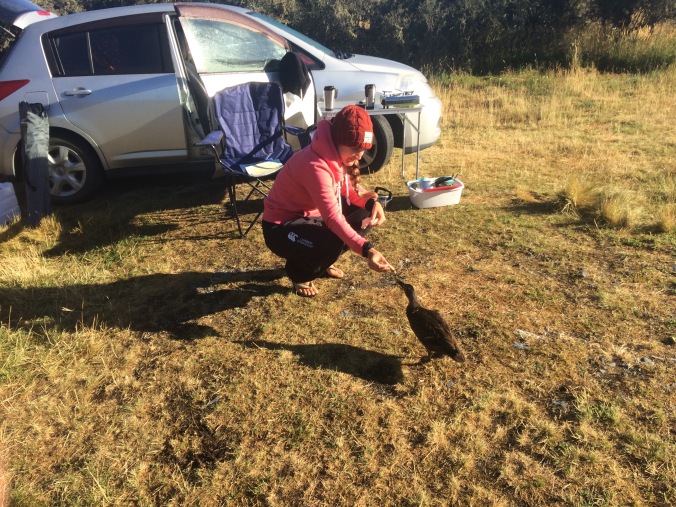 It took a little persuading but James finally got Caro to say good bye to her new friend and we headed back towards Arthur’s Pass village and the start of O’Malley’s Track. We had a lovely hour and half tramp through the woodlands which opened up at the halfway point on to Turkey Flats which gave 360 degree views across the river and the surrounding mountain ranges with nothing but natural background noise for accompaniment. It was glorious. 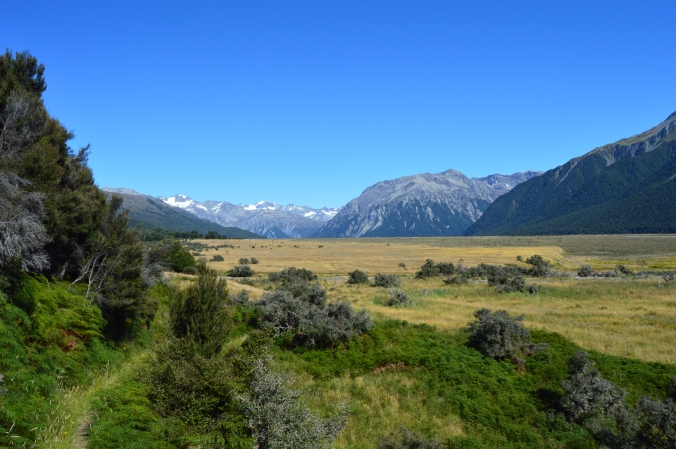 Our second walk of the day was up to Devil’s Punchbowl Falls, a quick 45 minute round trip starting in the village itself. For us, the best view of the falls was actually on the approach and not the viewing platform, but it was a good lung busting climb up many steps. 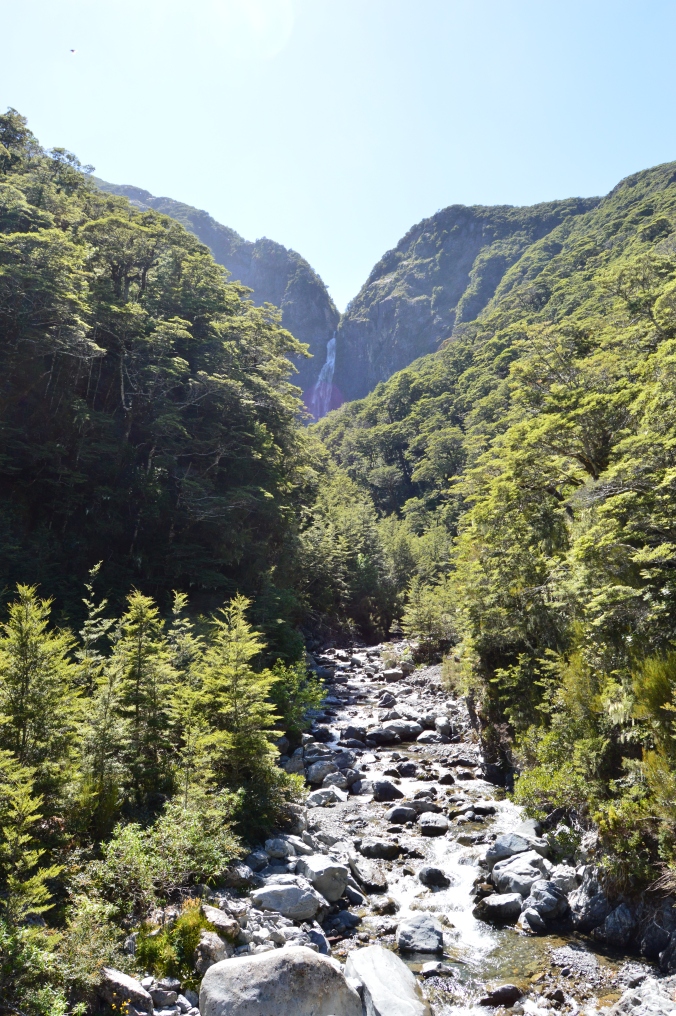 We felt that we had seen a good snapshot of what Arthur’s Pass had to offer, having postponed the main peak climb for another, clearer day on some future trip. We made tea and set off towards the west coast again, retracing our route through the mountains and stopping to take in the viewpoints that we had bypassed the day before. 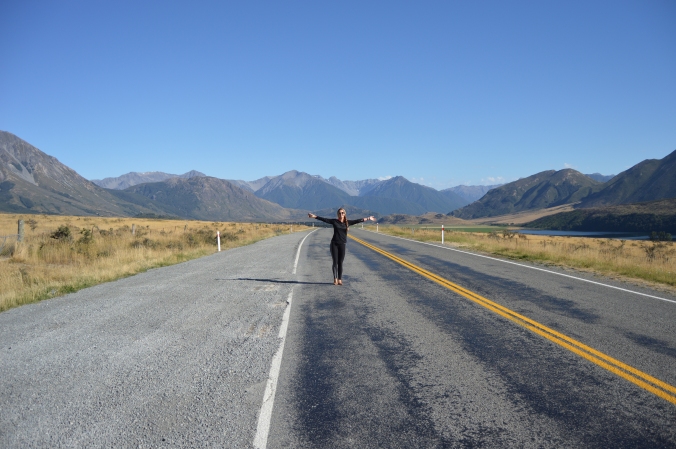 Naturally, the cloud did start descend and obscure some of the mountains but we still got excellent views down the valleys, and where able to admire the feats of engineering to build the road. 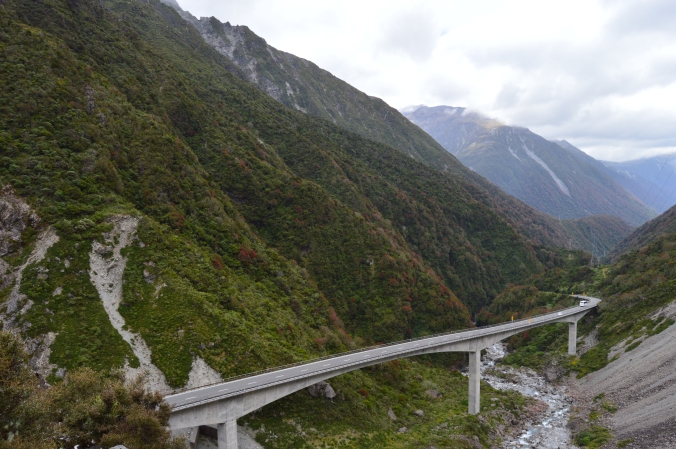 We had been told by some fellow lodgers from the Reefton Old Nurses Home that we had to stop at a particular café when we went to Arthur’s Pass stating, rather ominously, that “you will know it when you see it”. 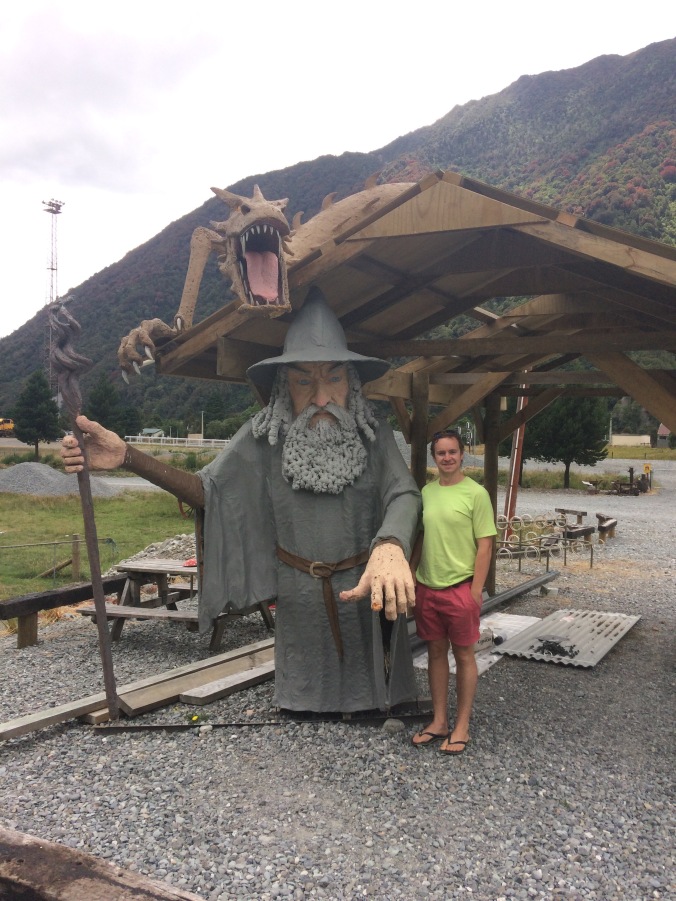 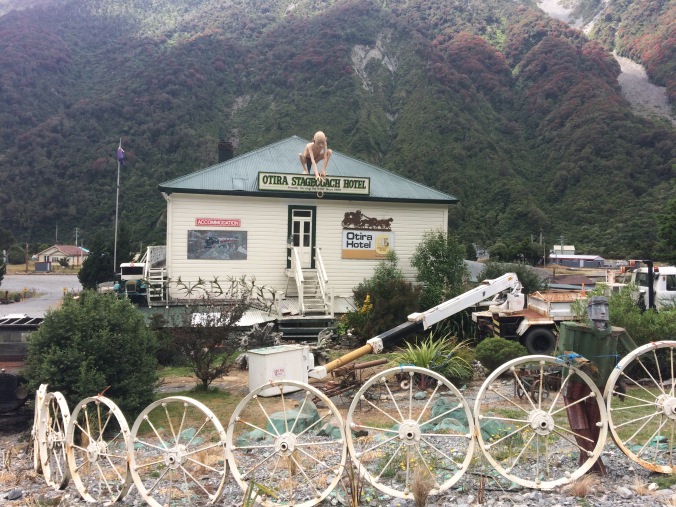 One can only imagine why the proprietors have felt the desire to decorate in such an extraordinary fashion, but it certainly is eye-catching. After a tour of the rather strange sites and admiring the very cute piglets we ventured inside in search of cake, only to be told that it was Monday and so they didn’t have cake. Rather perplexed as to the business model of not serving cake at a café in the height of the holiday season, we returned to the car and routed around in the boot in search of biscuits.

The drive back to the coast towards the town of Hokitika continued to be incredibly picturesque. Anyone who has visited New Zealand can attest to its seemingly endless beauty and confirm that we are not just gushing about our trip.

Hokitika’s biggest drawcard is Hokitika Gorge, and rightly so as the vivid blue grey waters are pretty awesome. Rather than heading straight for the highlight we took in some of the town sites, including a collection of interesting outdoor art installations titled “Take a Seat” 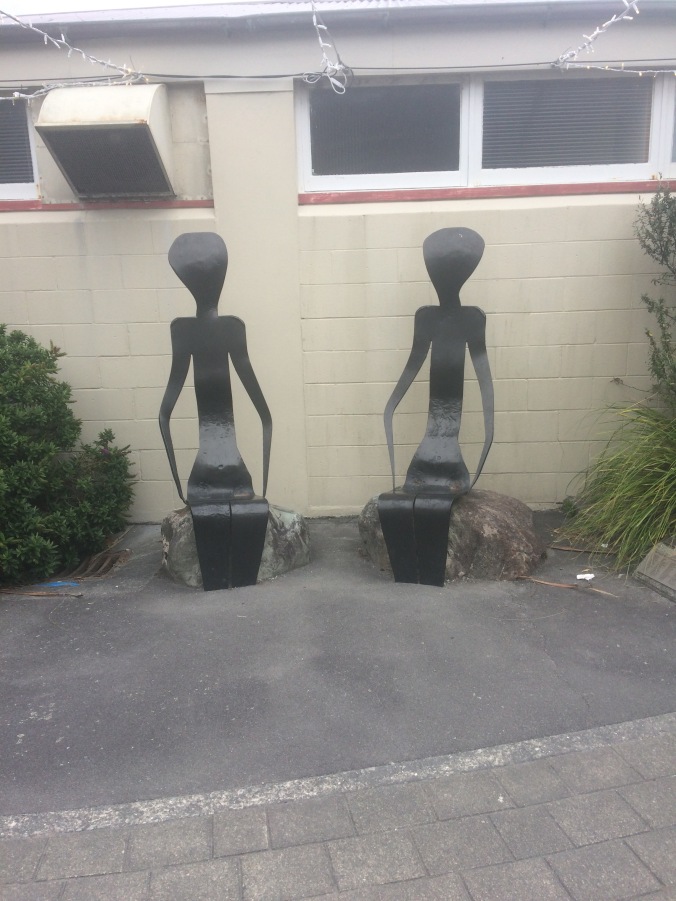 Hokitika Gorge is a 30km drive outside of the town which takes you through more dairy farming country. James spent the drive gazing out of the window at the many farms, which was problematic, as he was driving.

The water flowing in the gorge is an unexpected, milky blue colour as a result of its glacial source. The glacier erodes fine particles from the mountain rock which are then suspended in the water which flows downstream. Luckily for the local area, the river runs through a beautiful gorge and they have an excellent tourist hot spot. 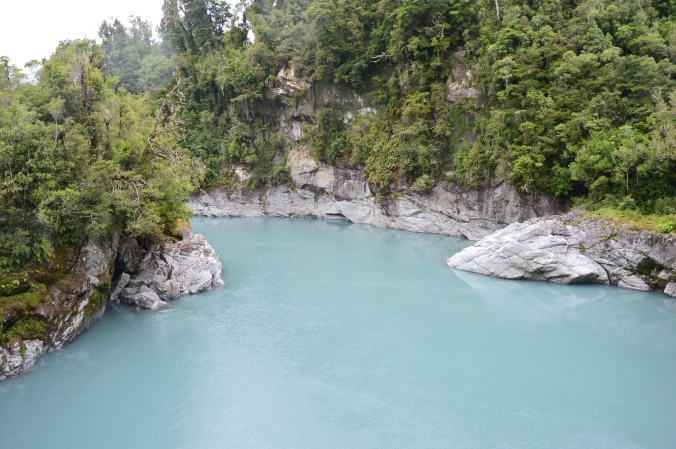 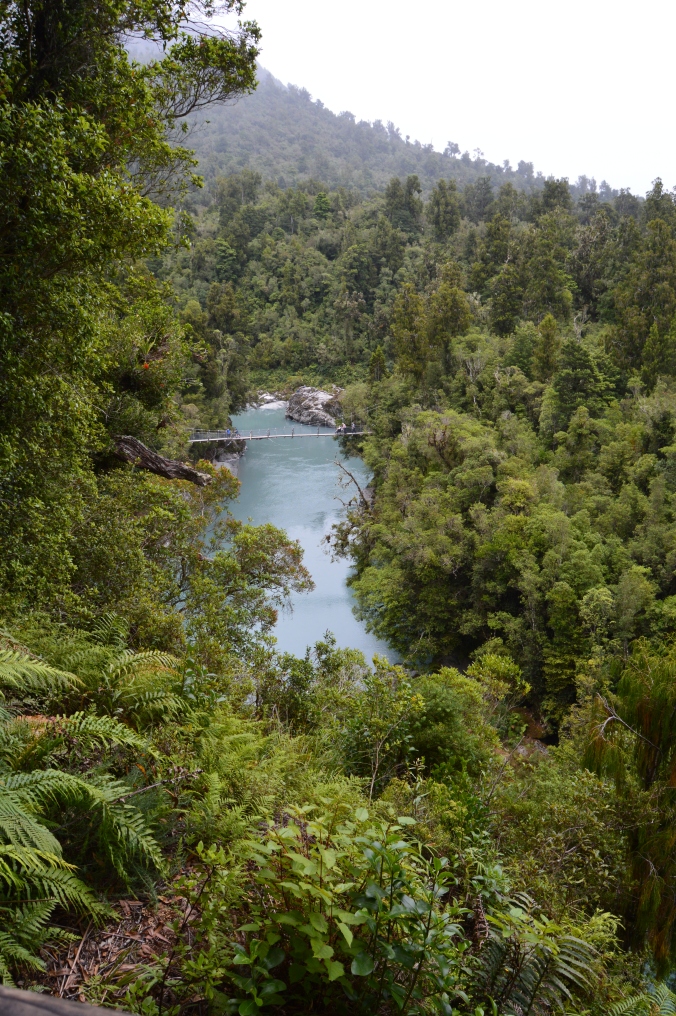 Our camp site for the night was the strangest we have come across on our travels so far, by a long way. The Seaview Lodge used to be a nursing home and very little work has been done to convert to its new use as a campsite / peculiar dorm style lodging house. We pitched our tent in the garden and then made use of the rambling communal areas which are made up of the old nursing home facilities complete with original furniture. 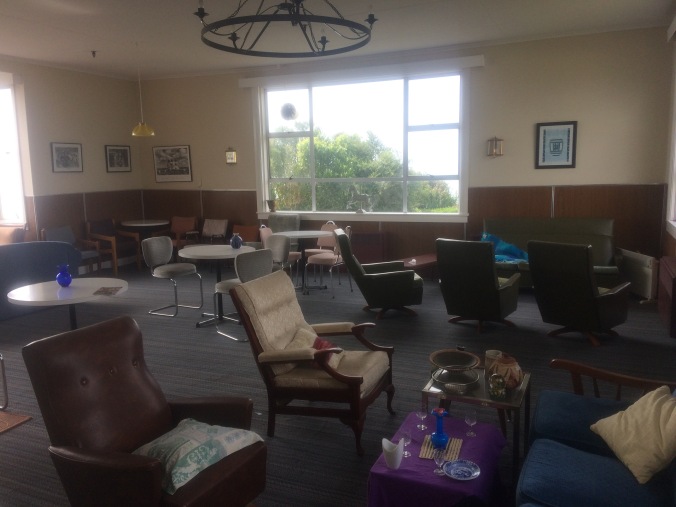 Each time new arrivals showed up they took themselves on a tour of the extensive property and could be heard exclaiming with incredulous delight as they happened upon another room filled with armchairs and redundant bingo wheels. It was extremely odd, naturally very dated, but also completely functional. It was absolutely fabulous and one of our favourites so far. 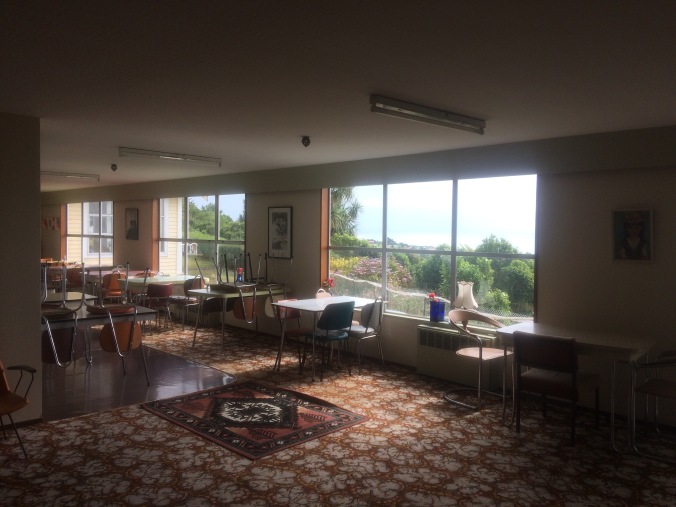 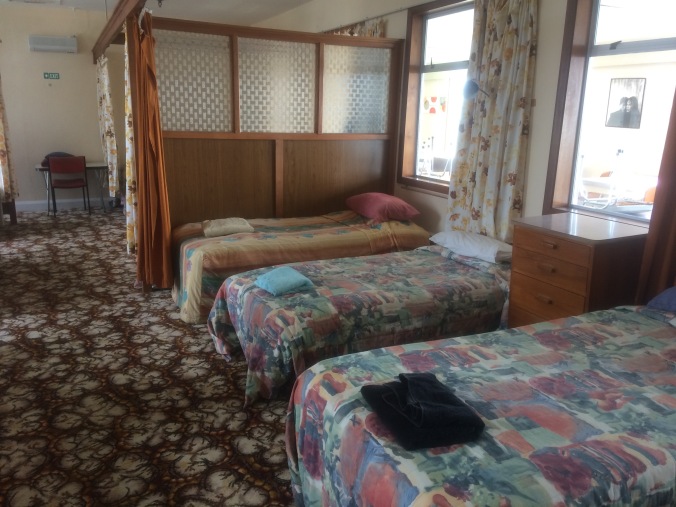