After a wonderfully relaxing evening in the dry, we woke up to beautiful sunshine and were definitely in need of a walk to stretch our legs. We headed out to Victoria Forest Park to tackle the Murray Creek Track, a 10.7km loop through forest dotted with redundant mines. The area had been heavily mined for a variety of resources, gold among them, and the walk passed many relics of these forgotten industries. At the very start of the walk we met a German chap who advised us that we would be better off walking the loop in the opposite direction to the one which we were planning, as the track included a very steep section which is easier to come down than climb up.

So, we set off and walked steadily uphill, passing through beautiful woodlands and over waterways trickling through the trees and rocks. It was very idyllic and the only other people that we saw were our German friend and a local guy walking his dog. It was a lovely quiet spot away from the hustle and bustle of the high holiday season. 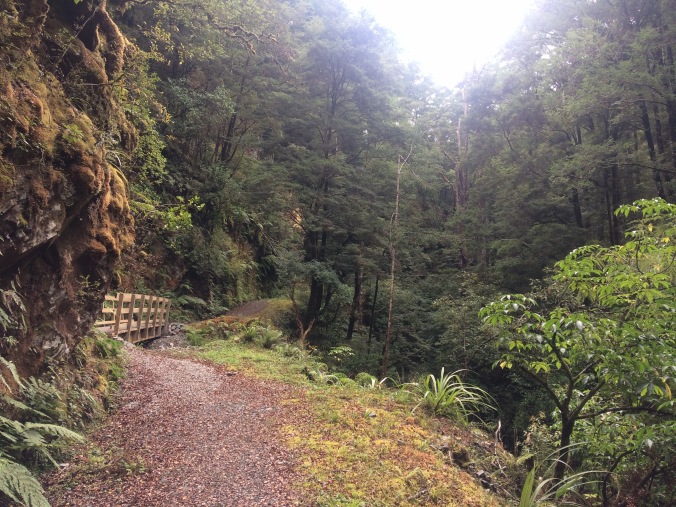 After several kilometres Caro started to question the advice so kindly given by our fellow walker, as we had been climbing uphill continually. The walk had been lovely and we had observed the remains of the mines which were gradually being reclaimed by the forest but, at the end of a particularly steep section, Caro had determined to wait for our German friend at the end of the track and throw her hiking boot at him for his useless advice.

We stopped for lunch in a clearing and soaked up the warmth of the sun after our damp couple of days.

For large parts of the walk we had been stalked by New Zealand Fantail birds (also know as piwakawaka) which follow behind walkers and dart down to catch the insects that their footsteps disturb. This habit means that they come quite close to you so you can get a good look at them. They are very cool but also very quick and our attempts and capturing one on camera ended in utter failure, so here is a picture from the google. 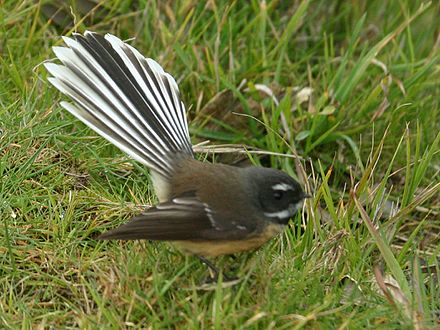 We had climbed for over 8km and the poor German chap’s fate was looking worse and worse, when we finally reached the descent. We skeetered and slithered down what felt like a near vertical track of loose stones and slippery leaves for a kilometre and a half. About 200 metres in Caro admitted that our German friend may have had a point and by the bottom was eternally grateful that he had been there to set us on the right track.

We popped in to Reefton briefly to make a cup of tea, and to see what it looked like in sunshine before hitting the road for a magnificent drive along the Buller River to Westport.

The town of Westport itself is decidedly average and we didn’t even get out of the car before whisking off to Tauranga Bay to see a fur seal colony. 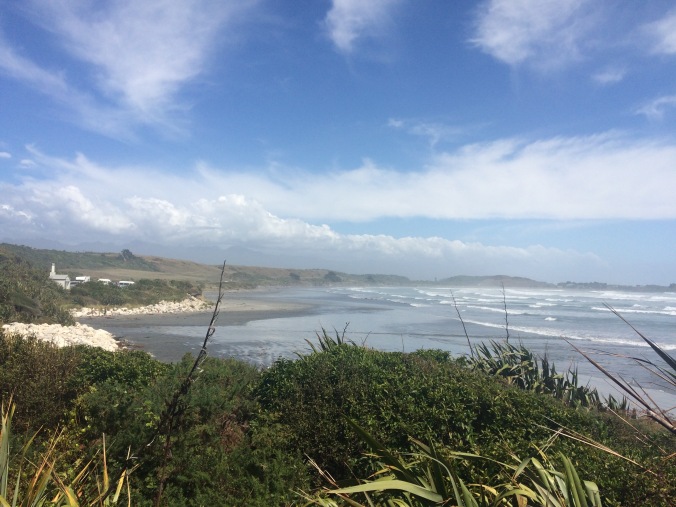 Seals are rock coloured, rock shaped animals that like to lie on rocks, so it can be quite challenging to spot them at first. It took us a few moments to locate any at all and then we spotted a creature which appeared to be channeling Caro’s preferred sunbathing method and knew that we were on to a winner.

After that they put on a bit of a show for us with their ungainly but efficient method of clambering over boulders. 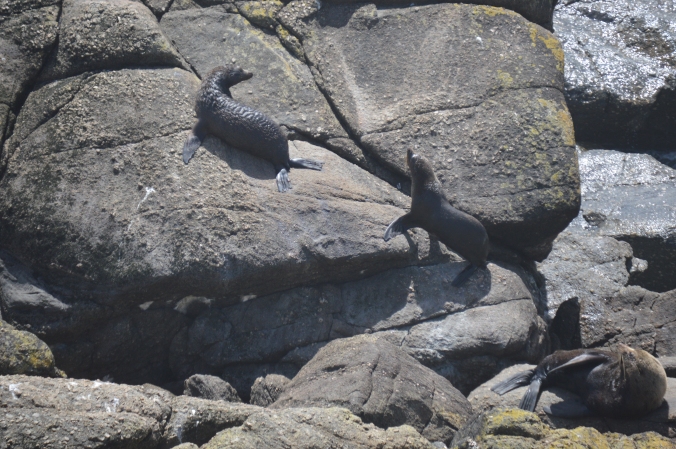 We were now on the lookout for babies and these two obliged us by coming out to play under the watchful eye of mum.

Another little one was satisfied to stick closer to mum and enjoy the sunshine.

Having had our fill of cute, we made our way south and found ourselves a camping spot at Jack’s Gasthof, an absolutely beautiful campsite with distant views of the mountains.

A Dutch couple arrived shortly after us and set up camp nearby and we got to chatting. They joined us as we took ourselves on a tour of the campsite and were highly amused by the fact that we brought cups of tea with us; “So English!”  The campsite ran adjacent to the river and, naturally, we waded in to see how cold it was. Our Dutch friend absolutely had to take a picture of us calf-deep in a river still toting our cups of tea. 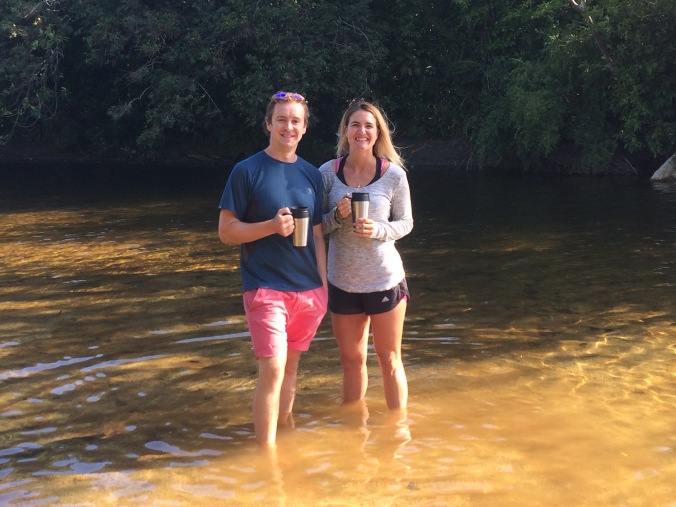 The campsite is really a secondary business for the owners, who run a pizzeria and bar on the property. The pizzas smelled absolutely amazing but sadly, they only accepted cash of which we had none and so we had to satisfy ourselves with our omelettes. Eating a meal that was quick to prepare turned out to be an absolute blessing because, with very little warning and no apparent cause, a plague of sandflies descended upon our campsite. We had heard tales of this particular scourge of the South Island but this was our first experience of them and can confirm that they are little bitey bastards. They appear to be immune to insect repellent, take no notice whatsoever of mosquito coils and their bites continue to itch at random for days and days afterwards. Caro had covered herself head to toe in insect repellent, to the point that she must have been about 80% deet, and had the smallest possible amount of skin exposed but was still being ruthlessly attacked. Eventually she gave up and hid in the tent and James lasted only a few minutes longer before joining her, bug spray in hand to kill the little buggers that had managed to sneak inside in the 15 seconds that the door was open.

As we were in bed even earlier than usual we had some time to read and James started his recently purchased and very trip appropriate book.

It was an unsettled night with Caro being woken up by the interminably itching bites that covered her feet. Fortunately, we are used to Caro being devoured by fitey buckers and had purchased papaw ointment, which works extremely well to soothe bites and was applied in vast amounts the following day. When we woke up in the morning it sounded as though it was raining but we soon realised that it was in fact the noise of sandflies hurling themselves at the tent in an attempt to get in. Honestly, they are the devil’s own insects. This situation meant that we ate breakfast very quickly, had rushed, freezing outdoor showers and proceeded to collapse the tent, only to find it and the shelter covered in the discarded shells of another gross flying critter. 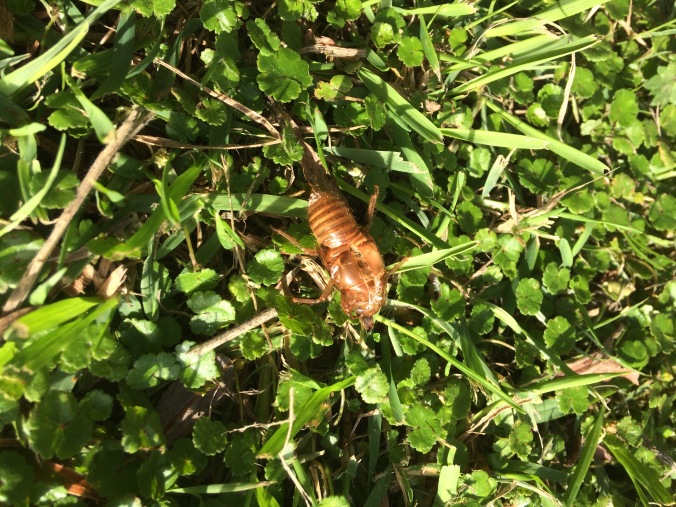 It was time to leave. We use an excellent free app called CamperMate to find our campsites each night and have, since this particular experience, scoured the comments section for any mention whatsoever of sandflies.

We made our way back to the coast via Mitchell’s Gully Gold Mine, which we didn’t go in to because you had to pay, and drove South towards Greymouth along some more beautiful coastline. By good fortune we happened to be crossing Fox River on a Sunday and the delightful Fox River Market was just warming up on one of its banks. The whole set up can’t have been more that 15 stalls yet there was live music. Regardless of what each stall sold you could guarantee that there would be a corner of a table dedicated to whatever they happened to grow or raise on their property. One stall had a beautiful collection of handmade toys accompanied by a single box of a dozen eggs.

The place was hugely popular both will locals and tourists and people were arriving thick and fast as we made to leave. No doubt it would have made for a highly entertaining morning of people watching and listening to acoustic classics had we decided to hang around for longer. We, however, had sites to see and continued south down the coastal road to the Blowholes and Pancake Rocks, which are located together a short distance from the roadside. There isn’t a town there, just a visitor centre, shop and café. There is a fair amount of parking but there were also cars parked all along the side of the road which is never the herald of a peaceful tourist attraction. The pancake rocks are pretty cool and, as ever, we were awed by the incredible power of the sea and its shaping of the land and geologists are still not able to confirm what exactly caused the odd limestone formations seen here.

We have seen a fair bit of New Zealand’s coastline thus far and it’s quite incredible how varied it is; fine black sand, stretches of white paradise, treacherous rocky outcrops, golden caramel swathes backed by rainforest and grey sand dunes with the consistency of powder. This stretch of the west coast was no less beautiful and all the more mesmerising due to the hazy mist that appears to permanently hang above the water adding magical feel of the place.

2 thoughts on “A whole array of wildlife from Reefton to the Pancake Rocks; birds, seals and the dreaded sandfly”