James’s uncle, aunt and cousin happened to be in New Zealand visiting their daughter/sister and her partner and we had instantly, and gratefully, taken them up on their kind offer of going to stay for a few days to catch up. This meant that for two glorious nights we had a bed to sleep in, hot showers that were indoors and a washing machine that actually washed clothes. The Chadwicks had rented a house in Tauranga and our route there took us down the east coast of the Coromandel Peninsula and in to the Bay of Plenty. The forestry industry is absolutely enormous in New Zealand and we drove through an extensive forestry area where the swathes of felled trees scar the landscape intermittently, although not sufficiently to make the view from the car window anything less than beautiful.

We had decided to visit the much-publicised Cathedral Cove and, as we drove to the carpark, we took in the sheer volume of people traipsing their way up the hill to get to the walking track. We have no doubt that Cathedral Cove is beautiful but we had no desire to see it shoulder to shoulder with hundreds of people, so we turned around and drove away again. As with New Chums Beach, if you want to avoid the crowds you do need to get there early. This is the first time in New Zealand that we have felt crowded in any way, unsurprising as it is now the height of the holiday season.

The fortunate thing with very popular tourist attractions is that if you drive 15 minutes or so away from them, you can often find little gems that are overlooked in preference for the big-ticket items. We found one such town just south of Cathedral Cove at Tairua. We stopped for lunch on the edge of the estuary and it was a lovely spot for a sandwich in the sunshine.

We had planned to take in Karangahake Gorge before meeting up with the family but we needed fuel and Caro wanted ice cream so we took a small detour in to Waihi to pick up the essentials. As we drove through town our eye was caught by an enormous empty building perched on a hill above it and we simply had to go and investigate. 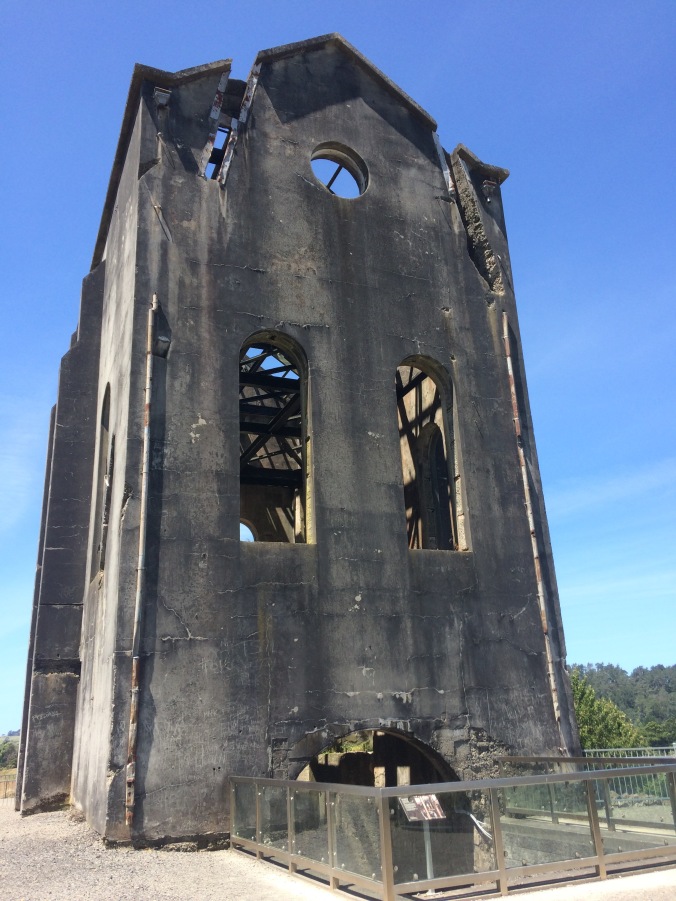 It is an historic Cornish pump house which formed part of the local gold mining operations and had been moved, fully constructed, 296 metres back from the precipitous mine edge in order to preserve it. The gold mine is also right on the edge of town and you can appreciate the massive scale of the mining done there. Also, the roundabouts look like squashed daleks so you should go just for that.

Back on track with our original plan, we headed for the scenic drive through Karangahake Gorge and stopped to for a quick stroll around some of the old mining sites and the gorge itself. We spent a fantastic hour walking along the gorge along the old mine railway and exploring the tunnels and ruins. 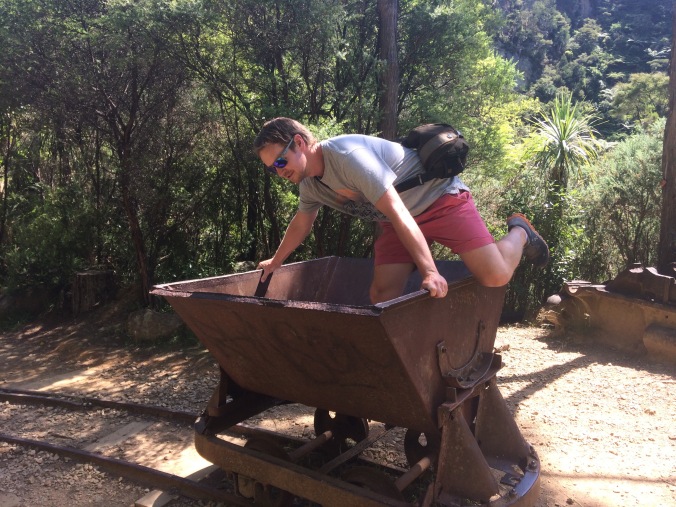 The mining stopped in the early 1900s but there is still lots of old metal work and building attached to the gorge walls, and you can even wander down some of the mine shafts. Even without the fun mining history, the area is beautiful and made for a very pleasant walk to work off our ice creams. 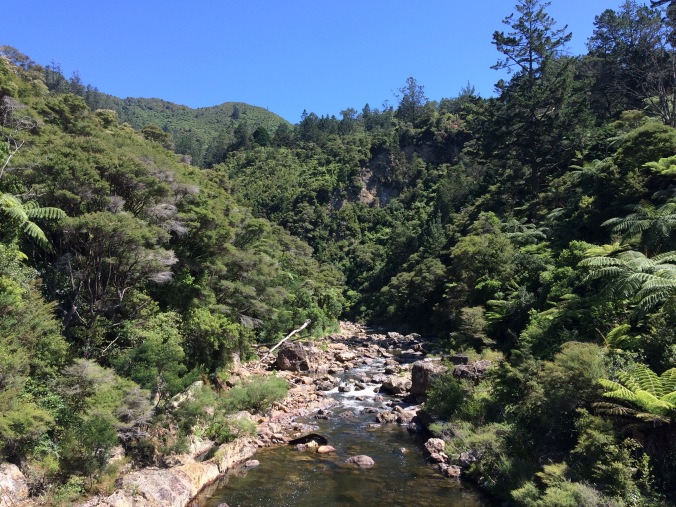 If you don’t have time to do any of the walks we would still recommend that you do the drive as it is equally beautiful from the car.

Our final drive of the day was supposed to be a short stint down to Tauranga, which turned in to a two-hour slog as we sat in holiday traffic. We made it in the end and, after some much needed showers, enjoyed a BBQ and a beer while catching up with family and taking in the average view from the patio. 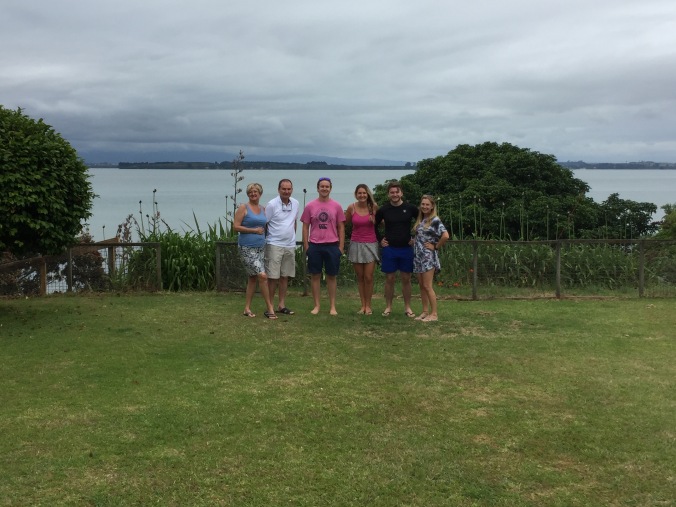 The next morning, we set off with our hosts to climb Mt Maunganui and explore Tauranga town. The mountain was popular, with the usual nutters running rather than walking up and down it, but it’s well worth the climb as it gives 360 degree views.

We had a thoroughly lazy afternoon in the sun drinking a few beers and that evening we enjoyed the luxury of actually going out for dinner and drinks. Everything had been far too civilised so we made sure to lower the tone of the evening by getting everyone to the Irish bar for the compulsory photos and pints.

It was a slightly steadier start the following morning but we did get our act in gear enough to clear out and re-pack the car, which served as a reminder of the sheer quantity of stuff that we have stashed in footwells and under seats. We said our goodbyes to our excellent hosts and continued our journey south to Rotorua.

Now, Rotorua is famous and usually makes top 10 lists of places to visit in New Zealand but we weren’t sold by it at all. The simple fact is that it absolutely stinks and the thought of paying money to wait for up to two hours for a geyser to erupt was hugely unpalatable to us. We saw what we could for free in and around town, venturing out as far as the extremely popular Kerosene Creek. Thermal pools are certainly an interesting novelty and you absolutely don’t have to pay to see or bathe in them, just be prepared for crowds. Rotorua mud is also supposed to be very good for your skin, this looked equally unappealing.

Enough about smelly mud. Rotorua town is generally non-descript but we did have two other places of interest, the first was the museum building, which is quite unusual.

The second was infinitely more exciting and definitely worth the money. We had resigned ourselves to the fact that we weren’t going to see kiwi birds in the wild and that we would have to venture to a conservation site. We had been told that Rainbow Springs Nature Park, just outside Rotorua, is a good spot to see kiwis and an array of other New Zealand wildlife and we weren’t disappointed. We saved the kiwis for last and strolled around the native birds, reptiles and extensive school of trout before heading in to the nocturnal house. We weren’t allowed to take pictures so you will have to take our word for it, kiwis are wicked! They are the strangest looking birds you will ever see and they run around with great industry in a truly ridiculous manner. It was excellent. If we had had any inclination to stay in Rotorua until nightfall, which we did not, our ticket would also have given us access to see them outside at night, which would have been very cool. As you are likely to be hugely disappointed by the fact that we haven’t been able to provide a photo of a kiwi, here is a picture of James scrummaging with an All Black kiwi statue.