We had two options to continue our journey north, either take a long inland detour or hop on the car ferry. We love an impromptu car ferry so we joined the short queue and watched the world go by in Rawene, a lovely little town with many historic buildings and, as it turned out, very friendly locals.

As the ferry pulled up to the dock we were approached by a lady from the local church group who asked if we were going one way and, as we were, would we like to jump on their local ticket which was half the price. The group could not have been kinder to us, chatting away and giving us advice on where to visit. It gave us such a lovely positive feeling about the very friendly locals.

Off the ferry, we continued driving north winding our way through some beautiful countryside in one of the least touristy areas of the North Island. We met very few cars and it appeared the main occupants of the area are thousands and thousands of cows. Having stopped for lunch at a charming spot under a power line, cheese sandwiches again, our eating habits are becoming quite predictable, we pushed on to Ahiphara on the southernmost end of Ninety Mile Beach and the most northerly point of our NZ adventure.  Ninety Mile Beach, which is actually 55 miles long, is epic and we were fortunate to see it on a clear day; the golden sand appeared to carry on forever in to the horizon. 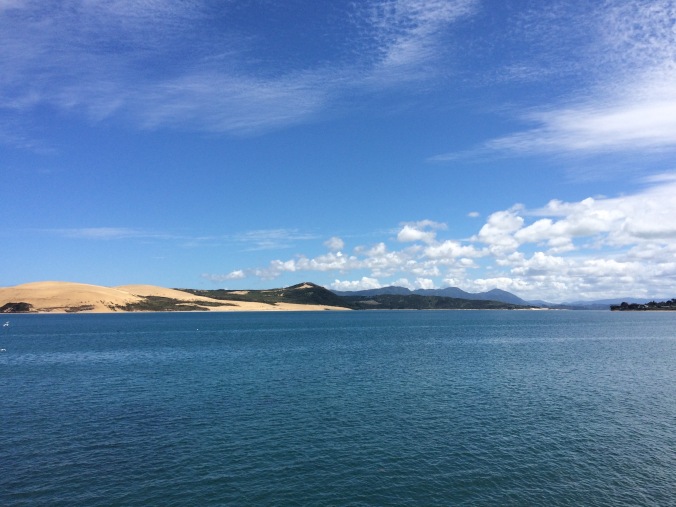 After drinking in the views for a few minutes, a quick paddle in the sea and Caro stubbing her toe for about the third time that day, we headed for the east coast and our campsite at The Cowshed. There wasn’t a huge amount more to it than a field and a semi-converted milking parlour, but it was cheap and came with two very friendly dogs, Lucy and Caesar, so Caro was in her element.

There was one odd moment during our stay when we were both woken suddenly at 5am by a howl that sounded an awful lot like a dying man. When the noise was repeated several times we both assumed that it was a cow and went back to sleep. We woke up to drizzle, had an argument about our need for a shelter, packed up the camp in silence and went and bought a shelter. James should have saved his breath and gone along with it in the first place.

The views on the drive to Kerikeri mainly consisted of cows perched on near horizontal slopes. We drove along the main street of the town and made our way to the heritage area where we had planned to do the two-hour tramp along the river to Rainbow Falls. Kerikeri appears to have a slight wayward chicken problem, as they were wandering around everywhere. 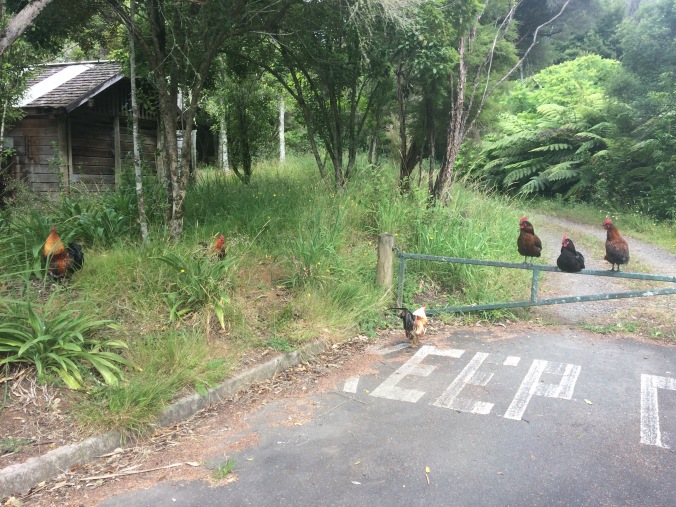 The walk itself is fairly easy going and we certainly needn’t have changed in to our hiking boots. There is plenty to see with two waterfalls and an old power house, just bear in mind that for a short patch, you do walk under an overpass and there is a fair bit of car noise but it is definitely worth carrying on passed this to enjoy the views of Rainbow Falls.

We retraced our steps to the historic precinct which houses the both the oldest house and the oldest stone building in New Zealand. These are set among beautiful gardens which looked and smelled amazing and are definitely worth a stroll around.

As the birthplace of New Zealand, Waitangi was high on our priority list for the North Island and only a short drive from Kerikeri. In order to reach the treaty grounds you have to cross a single lane bridge which has a passing bay in the very middle, which we found to be quite ingenious. We arrived at the treaty grounds with about 45 minutes to spare before the next tour and decided, naturally, to spend the intervening time having lunch in a carpark in the rain.

It costs NZD40 each to get in to the treaty grounds and it is definitely worth it, particularly if you time it correctly to join a tour and watch the cultural show, both of which are included in the ticket price. The tour was definitely a good call, we were given a huge amount of information focussed specifically on the period between the first European settlement and the signing of the Waitangi treaty in 1840. Up until this point, our only experience of Waitangi Day had been joining the thousands of Kiwis who take to the pubs of London on February 6 for an epic pub crawl, and somehow that didn’t quite convey the significance of the day. Also, you get to wear an earpiece which makes you look really cool. 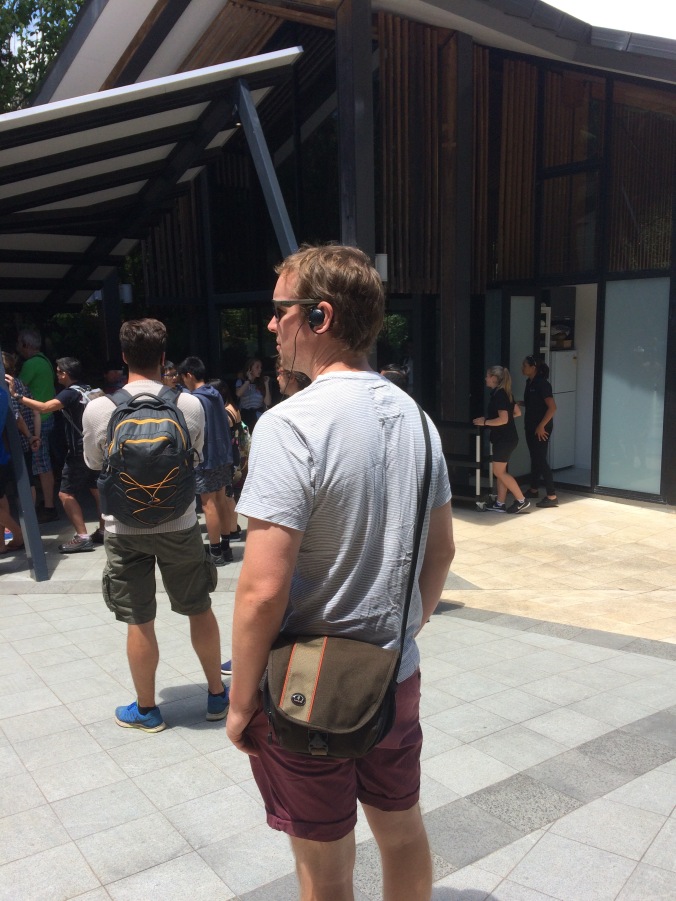 The grounds are beautifully maintained and the view out across the Bay of Islands is nothing short of spectacular.

Once we had finished our tour we were led to the meeting house for a Maori cultural show. The meeting house itself is very cool and it was interesting to learn about the different carvings that adorn both the interior and exterior. 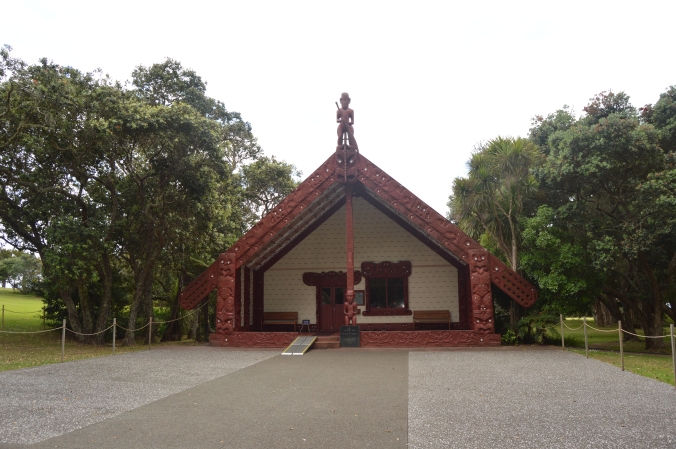 We were both a bit apprehensive about the cultural show as, fairly often, they can be a bit cheesy and full of tourist claptrap. We really enjoyed the 30 minute show at Waitangi, which is designed to inform and entertain. There were some aspects to be taken seriously and protocols to be respectfully followed but the performers (for want of a better word) were clearly enjoying themselves and the intention is that you do too. The show culminated with an eagerly anticipated Haka, which did not disappoint. 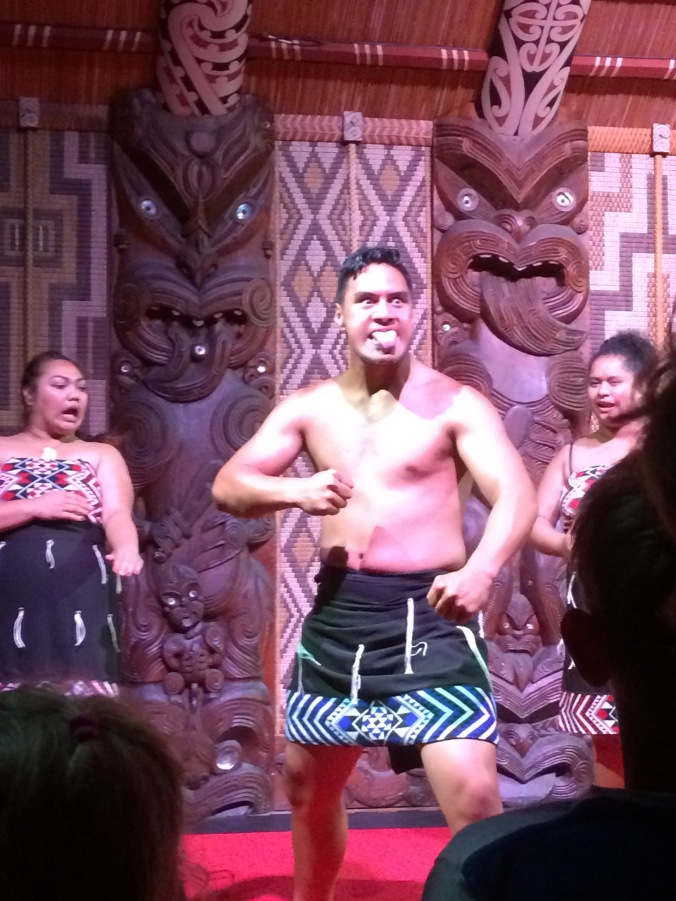 Having had an excellent day, we made our way to a free campsite at Waipu Caves. For a free campsite it was brilliant as it had flushing toilets and an outdoor shower. The spot was also idyllic and we laid the tent out to dry out from the morning’s drizzle and proceeded to our personal glade for a spot of yoga. 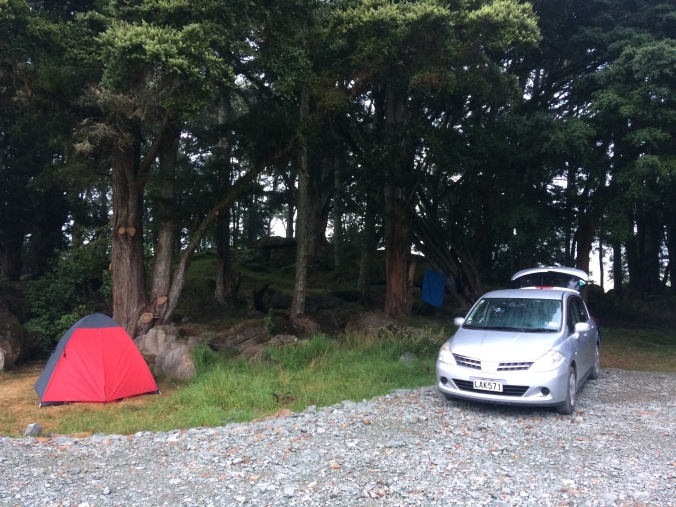 The following morning we were awake early and were greeted by a beautiful misty morning for our stomp around the caves.

The caves are famous for having glowworms and are completely free to visit. It was another of those self-guided health and safety nightmares and Caro was a bit uncomfortable clambering across the muddy slippery surfaces in the dark. It was worth it, however, for the sight of hundreds of glowworms strewn across the ceiling of the caves. We clambered back out and explored some of the surrounding woodland before heading back for breakfast, cold outdoor showers and to dry out our camping equipment after the previous night’s rain.

We had the unpleasant prospect of a long day’s drive back through Auckland’s traffic and it certainly was tough to be ploughing our way through mundane traffic again having enjoyed beautiful scenery so far. We persevered and found ourselves, several hours later, in the lovely town of Cambridge which glows with the prosperity that comes along with being a decidedly horsey town. It’s all about the horses in Cambridge.

We pitched up at a campsite in the middle of town and erected our brand new shelter for the first time. The shelter doubled the size of our camping footprint and led James to rename our abode Tent Mahal.

James had a bit of a mare with the coolbox, spilling yoghurt and breaking eggs and with much swearing he decided to take himself off for a walk before a serious sense of humour failure set in. The situation was rectified by hot showers, spag bol for dinner, an early night and the anticipation of another steep hill to climb the next day.