We were due to finish our Australian road trip in Perth and, as we had a few days to spare, we decided to skirt around the city and head down to the south coast and cover the south western corner as best we could. After a couple of fairly short days of driving it was good to have another long slog ahead of us. First up was Pinnacles National Park, which turns out to be the holiday destination for all of the flies on the planet that aren’t at Lawn Hill. We were armed with fly nets though and confident that we could persevere. We made it a good 200 metres before agreeing that, even with the nets, the flies were going to drive us round the bend. Fortunately, you can do a driving route through the pinnacles, which look like this.

The entire is park is basically an expanse of more of the above and a visitor centre. Now, it was pretty cool to look at for a few minutes but after a while you just start playing silly games (ie. trying to spot the most phallic pinnacle) so if you don’t have time it wouldn’t be the end of the world to give them a miss. We moved swiftly on, sticking to the coast and arriving at Yanchep National Park, where you are guaranteed to see koalas. This is much more our cup of tea and we enjoyed one in the middle of the park before venturing to find our furry friends. If no one has told you, koalas do almost nothing and the little that they do is done high up in trees so you can’t get that close to them in the wild. 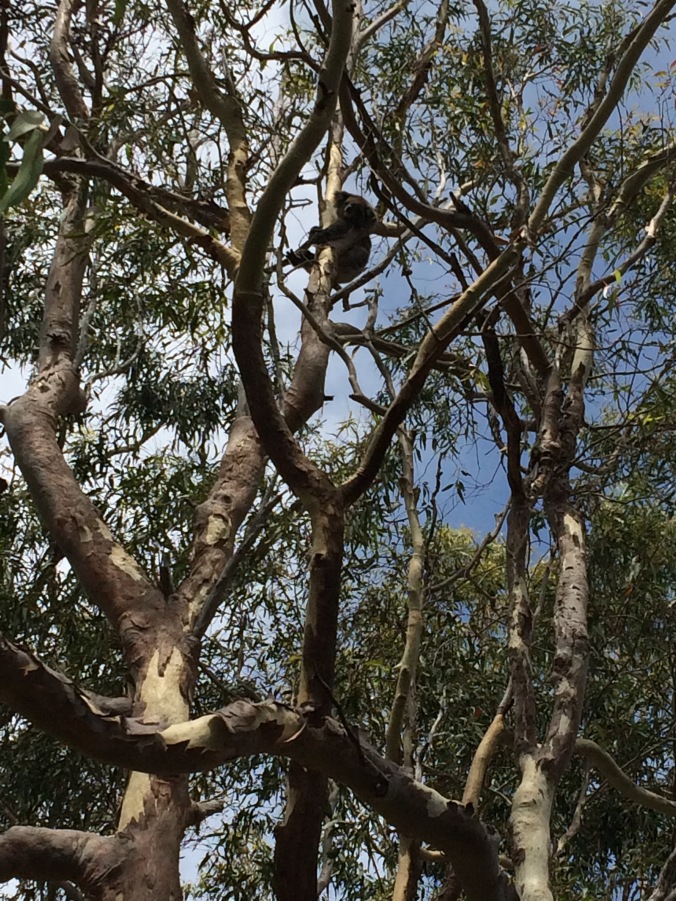 We did find one chap who seemed to be channeling Caro’s preferred manner of sleeping. 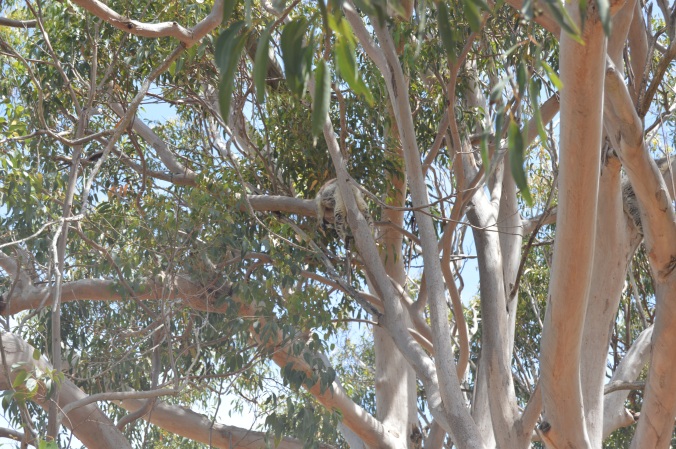 Even though they are largely sedentary, koalas are very cool and we had the added pleasure of a kookaburra and many kangaroos. James was determined to get a selfie.

We tried to achieve a birthday present for James in the form of a stuffed toy kookaburra that laughed when squeezed but the only one that we could find in the shop had dead batteries and didn’t laugh, which makes for a thoroughly depressing toy. The park itself is really pretty and a nice spot for some lunch and a bit of a wander, and it’s close to Perth for those just wanting to pop out for the day.

We, however, had some more miles to clock and cut inland. We knew that we weren’t going to make it all the way to Wave Rock and needed a stop mid-way to spend the night. Our eyes were snagged by the town of York, which is in the middle of bloody nowhere. As York University alumni, we felt that it was our duty to grace the Australian counterpart with our presence for the night. It was pissing with rain as we arrived in town, making our experiences of the two towns identical thus far. We parked at the only, and truly interesting, campsite next to the race course and set up Heidi. Overnight an epic storm hit with enormous crashes of the thunder and lightning streaking through the sky at regular intervals. We woke up the next day to an extremely soggy campsite and an overpowering smell of eucalyptus which, it turns out, is enhanced dramatically by rain.

It was James’s birthday so we splashed out (both literally and metaphorically) and had bacon sandwiches for breakfast instead of the usual porridge, before making our way in to town to see the sites. York was established during the gold rush as a supply stop and, when the gold rush ended, it reinvented itself as a rural town supporting the agricultural industry. This ability to adapt meant that town maintained its prosperity and the attractive high street retains much of the charm of this era.

York also plays host to Western Australia’s only operational sock factory, so there’s a fun fact with which you can shock your friends and family.

Having exhausted the delights of York we continued east to Wave Rock. Before we proceed to the rock itself, we must point out that the Visitor Centre also plays host to a lace museum AND a miniature soldier collection, for those people who happen to be bored and/or certifiable. We gave both a miss, largely because you had to pay to get in, and went to look at the rock. Wave Rock is one of the many granite formations in the region but with the added attraction that it has eroded over time in to the shape of a wave, and it’s pretty cool. 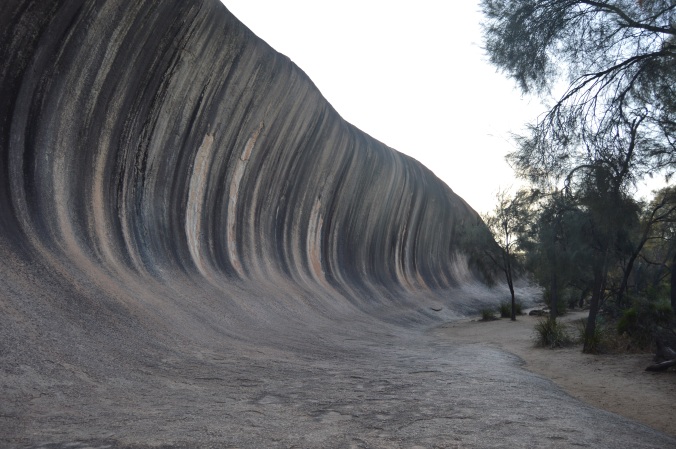 Obviously, it is essential that you pretend to surf on it.

As it was early evening, we had come armed with a couple of cans and climbed up the rock to enjoy the sunset and take some more stupid pictures, exhibit A:

The light hadn’t been ideal for taking photos so we planned to come back the next day. That night we enjoyed a few too many cans and cooked up enormous T bone steaks on the BBQ to celebrates James’s birthday. 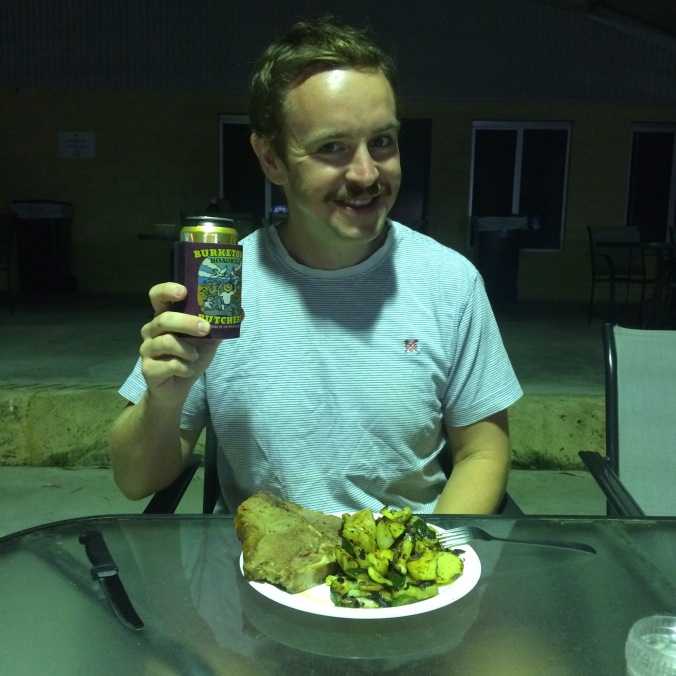 The following morning the foul weather was back with a vengeance and the light was certainly no better for photos but we did manage to stomp through the drizzle to Hippos Yawn to clear our heads a bit.

Back on the road we were planning to cover the whole distance to Esperance in one go but we saw a sign for the Lake King Tractor Museum. As luck would have it we happened to drive straight past it so we turned Heidi around and James spent 15 minutes looking around while Caro sat in Heidi. 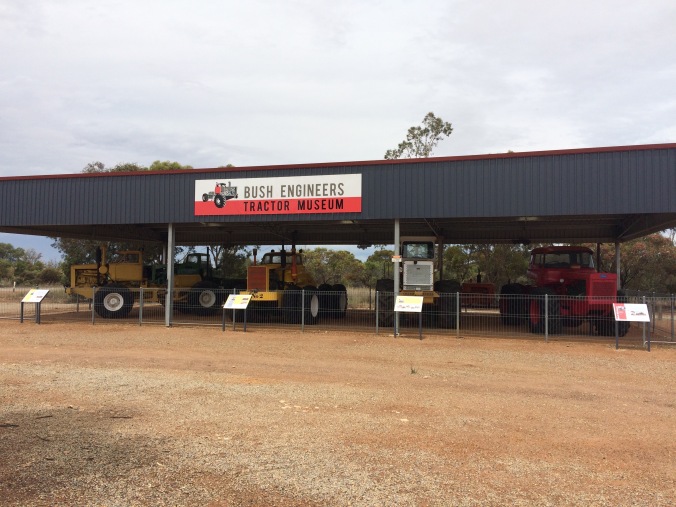 If it is your sort of thing; it was very interesting to read how farmers had built their own tractors when they could not purchase suitable machines locally to work the farm land. If it’s not; don’t worry it’s small and doesn’t take long to look around. We arrived in Esperance to a chilly and overcast evening and pitched up at a lovely overpass-adjacent campsite ready for more adventures the next day.