We were grateful to turn off the highway and head for the coast and Kalbarri, it had been a long and thoroughly uninteresting drive for Caro. It was slightly more interesting for James as the route brought us through the wheat growing areas, so he spent most of the time gazing out of the window at farm machinery and playing “spot the combine” on his own because Caro gave up weeks ago.

In order to get to the town of Kalbarri itself you have to drive through Kalbarri National Park so we stopped at a couple of the view points on the way through.

Then it was straight on to town and the Visitor Centre. By this point in our trip we were absolutely determined to have fish and chips and so our first question as we walked through the door was where to find them. The lady there advised us that our options were a fish and chip shop or the pub, which offered good meals and we were in luck because it was also karaoke night. We said that was excellent news and avoided the pub entirely. Once we’d set up camp we settled ourselves down outside the fish and chip shop with a couple of cans and enormous portions of food. 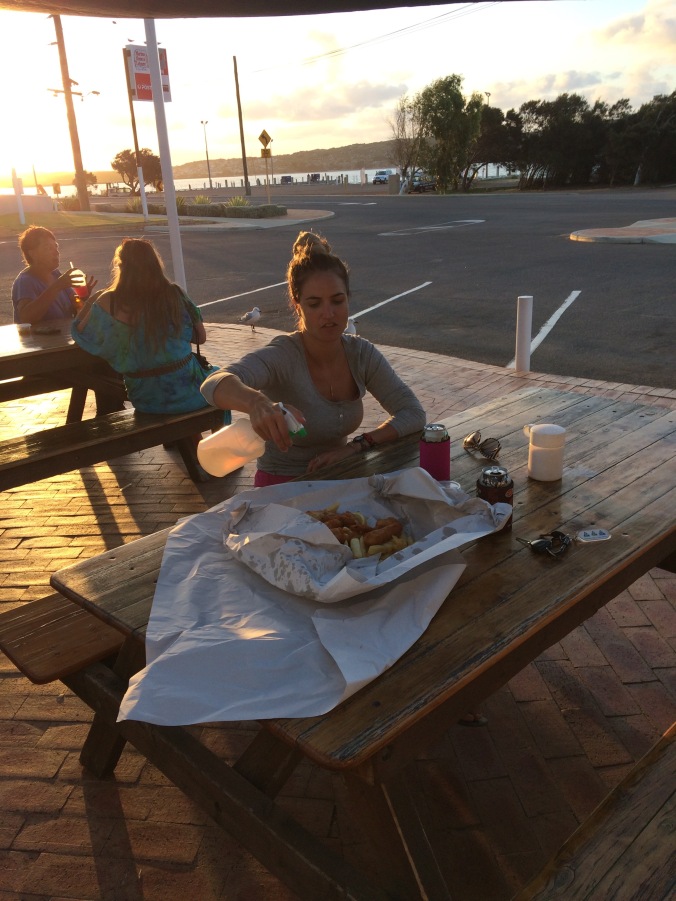 The food was very good, we are neither of us the eating athletes that we used to be and felt extremely full afterwards. This was a perfect people watching opportunity and we were gratified to see that our chosen spot was also popular with the locals. We had a chat with one woman, whose son kept squirting vinegar in to his drink, and the one piece of advice that she gave us was to snorkel at the Blue Holes before 10am. We already had plans to visit the National Park in the morning and snorkel in the afternoon and were unwilling to change them. We only wanted a quick snorkel anyway so we were sure that it would be fine.

The following morning we took turns sitting in the camp kitchen to charge all of the electricals and make breakfast before heading back out to Kalbarri National Park. Our first stop was Nature’s Window and James’s initial observation was that the urinal in the carpark had an excellent view, so there’s a top tip for the gents. The walk to Nature’s Window is relatively short and easy-going until the very end when you have to clamber over some rocks. Unfortunately, there were quite a few people there at the same time as us so you do have to queue for your photo opportunity.

The view is beautiful and we were actually grateful to our fellow tourists when one family discovered the infinitely more fun photo opportunity just to the right of the window. 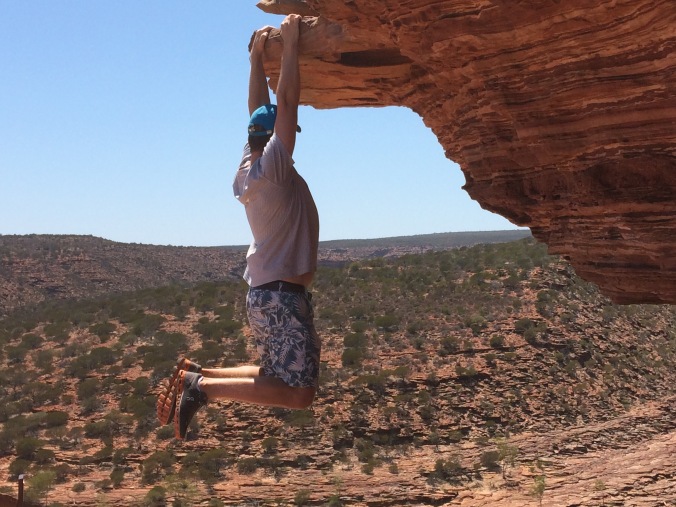 We have about a hundred of these 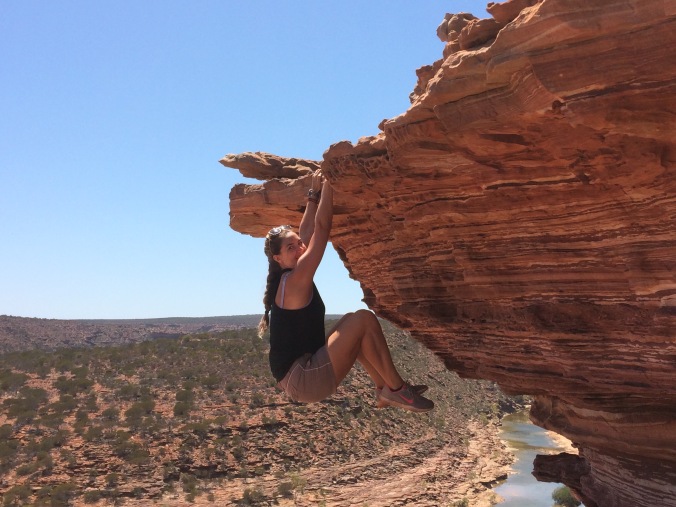 Having indulged our childishness for long enough, we moved on to Z-Bend, which is the iconic viewpoint of Kalbarri.

It was another beautiful spot and we contemplated climbing down in to the river bed but decided that the heat of the day was just too unappealing.

We were right on schedule, arriving at the Blue Holes at about 2pm as planned. It really is a mystery why we chose not to listen to a local. The water was about ankle deep over the reef at best, and then the waves would crash over whilst the wind blew a gale. We agreed that it possibly wasn’t the best time to snorkel and planned to make a quick early morning trip the next day before showering back at camp and moving on. Instead we spent our afternoon on a more sheltered piece of beach with lunch and a few hours reading in the sun.

The next day we were up early and headed out for a snorkel before breakfast. Unfortunately, the weather was just not on our side and the waves were still hammering the beach, so we turned around and headed back to camp to pack up and begin our journey south. This took us through the southern section of Kalbarri National Park and some more dramatic coastline. We stopped and admired the views at Red Bluff, Pot Alley, Rainbow Valley, and Eagle Bluff where we were treated to a pod of dolphins swimming in the surf below.  There is a trail that you can walk all the way along the cliffs but it was a 16km round trip which we didn’t really have time for. Instead, we walked a short section of boardwalk between Island Rock and Natural Bridge. It was definitely worthwhile doing the couple of kilometer round trip as it gives you very different views of the coastline to appreciate. 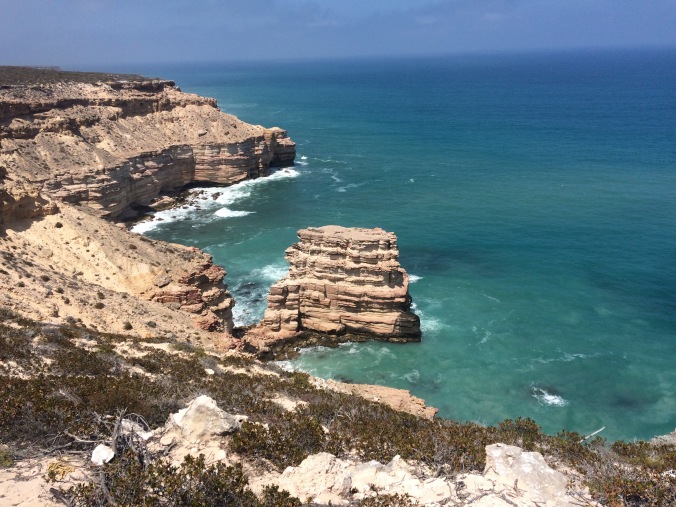 Our Lonely Planet (which has been excellent throughout) didn’t offer much by way of stopping points on the way south to Geraldton but we had picked up some leaflets on our journey and there were a couple of places that sounded interesting. We are definitely glad that we made these stops, stay tuned for our next post to hear all about them.