Due to lack of Wi-Fi we hadn’t been able to download the next instalment of His Dark Materials and the drive to Exmouth was made to feel significantly longer as we reverted to James’s retro tunes for our entertainment. We arrived in Exmouth around midday and made a beeline for the visitor centre, where they are inexplicably proud of their shrimp statue:

Armed with plenty of information, as per usual, we pitched up at the campsite 25 metres away, Caro cobbled together a Niçoise Salad of sorts from our not very extensive larder and James ran in to an old friend

For those unfamiliar with the story; James visited Australia with his family when he was 11 and, on one highly amusing occasion, was chased across a campsite by an emu whilst the rest of the Stones watched and laughed.

Back to our tale. Exmouth is a famous whale watching spot, Humpbacks use the bay as a nursery to raise their young calves before travelling south. The season officially ends at the end of October and, as it was early November, we couldn’t be sure that we would spot any. There was only one tour left running and they only offered a sunset cruise rather than a whale watching cruise. We booked anyway, thinking that it would make a nice first wedding present to watch the sunset from the water with a couple of glasses of bubbles.

Trip booked, we walked in to town to track down snorkelling gear and a rash vest to protect James’s truly English skin from the sun. Buying snorkelling gear is a bit of a balancing act, some tours give lend you gear for free and it costs AUD15 on average to rent it on the beach. We felt that we would be doing enough to justify buying our own. Our purchases made we went back to camp, James to swim and Caro to do battle with the schizophrenic Wi-Fi.

Late afternoon we were collected and delivered to the boat ready for our sunset excursion. The crew were excellent, with the small team of two looking after us in such a relaxed way that it felt like a lovely casual evening for them too. There were only 15 or so people on board, compared to the 40 odd that the boat can hold, which just added to the chilled feeling and meant that we all had space to move around. We set of in to the bay and had just seen a pod of dolphins when James spotted a spray about 250m away. The captain quickly headed over in that direction and we were greeted by a mother and calf humpback swimming slowly towards the mouth of the bay and the ocean. Both whales surfaced regularly, although they were continuously swimming away from us so our pictures were all of distant sprays.

It was amazing to follow along in their wake as the swam with such grace for animals their size. To make matters even better, one of the crew appeared at our elbows bearing a tray of snacks and asking for our drinks order. With a glass of fizz and a beer in hand, and a mouthful of cheese and crackers, we were just thinking that it really was an idyllic evening when the calf, deciding that we weren’t paying enough attention to him, leapt out of the water 20 metres from the front of the boat. He breached another 3 or 4 times while mum waited patiently for him to stop showing off and we didn’t manage to take a single photograph.

As the calf started to calm down we kept pace with the pair, enjoying our drinks keeping a beady out for any more.

Proving that we really are the ultimate whale-watching couple it was Caro who spotted the next whale in the distance. We pointed him out but as it was quite a distance away the captain decided to linger for a while and see if it would put on a show. The whale proceeded to rear out of the water repeatedly, as if defying us for our lack of faith, and the captain powered over towards it. At which point it stopped doing anything at all and promptly disappeared, so we had another glass of fizz and admired the views.

We turned and started to make our way back towards the port ready for sunset and came across another pair of whales. Now we can’t agree if it was the first pair again or a new pair but this time they were staying still, the mother lying on her side so that the calf could feed. The captain cut the engine and as luck would have it we drifted over within 50 metres of them. To start the engine again would have disturbed the whales so we spent 10 wonderful minutes drifting beside them until they decided to move on again. 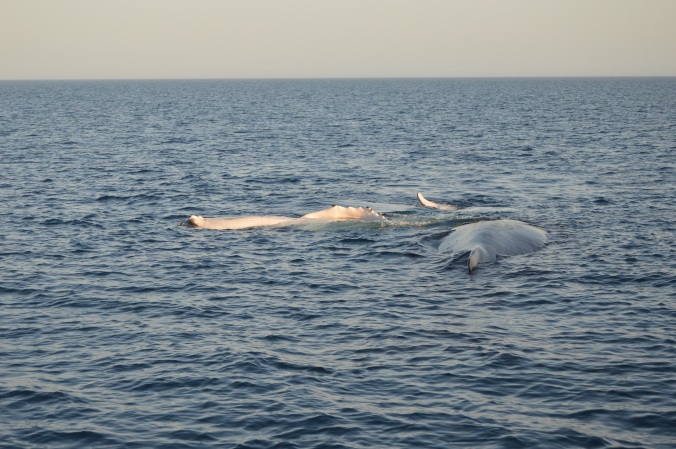 With sunset fast approaching we continued on our way back to port with a couple of treats in store. A manta ray swam directly under the boat and as we were leaning over the side admiring it we were called to the other side to see a yellow sea snake observing us from the surface, his head out of the water. James doesn’t like snakes and could probably have lived without this particular animal sighting. The whole trip was capped by a spectacular sunset.

The next day we had decided to head out to Cape Range National Park, about 50km out of town, to snorkel Ningaloo Reef. Our first stop was the Oyster Stacks, which can only be snorkelled for an hour either side of high tide and even then it’s pretty shallow. Due to the limited time available, there were a lot of other people in the water and that, combined with the fact that it was very murky with the sand being churned up, kept our visit brief.

We had three snorkelling stops planned that morning and had to drive between them. We didn’t want to get the car seats wet so had to ditch our wet swimsuits in the back of Heidi and travel in just our sarongs. By the time of writing this we have perfected this skill / lost a good deal of our shame however at the time we were novices and some very ungainly stripping in carparks followed. Fortunately, there are no photographs of this particular moment but we do of course have a post-snorkelling selfie. 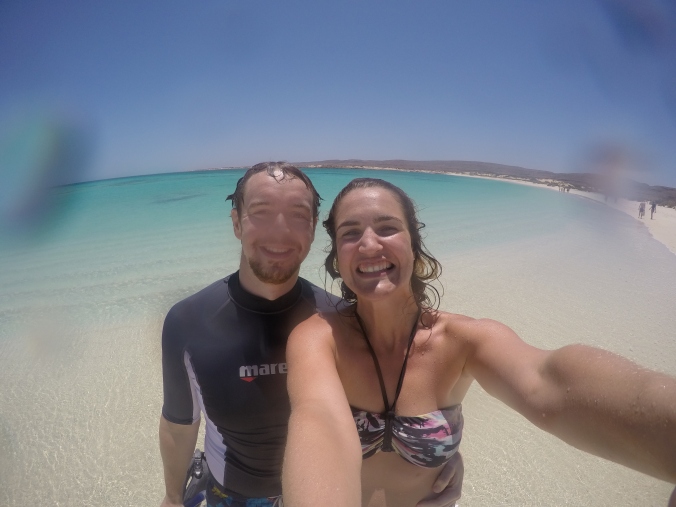 Next up was drift snorkelling at Turquoise Bay, not for the faint hearted. Having tracked up the beach and drifted swiftly along the reef we needed to get ourselves back to shore before current dragged us through a gap in the reef and out to sea. We are both strong swimmers and we had to put up a real battle to get back to the beach. That being said the snorkel itself was really lovely, some really beautiful coral and lots of juveniles enjoying the shelter of the reef.

Turquoise Bay also hosts an absolutely beautiful beach and Caro looked longingly at the sand before declaring that we were definitely staying in Exmouth another day so that she could come back the next day for some sunbathing.

We postponed snorkelling spot number three and made our way back to camp for a quiet afternoon. It was James’s turn to wage war on the Wi-Fi to apply for visas to Sri Lanka and it is something of a miracle that the laptop made it through this ordeal unscathed and wasn’t launched in to the pool. After a couple of patient hours visas were secured and the next stage of our trip confirmed.

That evening we went back to the National Park to visit the lighthouse view point and the turtle nesting information centre.

As the sun set we pulled in to one of the beach car parks and went for a stroll in the hope of seeing turtles coming in to nest. We walked for about 15 minutes without seeing anything when, all of a sudden, a head popped up above the surf, and then another and we plonked ourselves down on the sand confident that the turtles would be making their way up the beach very soon. It turns out that turtles take a really long time picking their spot and, whilst we continued to see them bobbing up and down, none seemed to take a fancy to our particular location. We were quickly losing the light and decided to walk a little further up the beach before calling it a day. It was so lucky that we did, just as we were about to turn around Caro spotted a turtle making her way up the beach. We were about 50 metres away so we dropped down and crept towards her a little and then sat and just watched the gruelling effort the turtle made to reach the nesting spots in the dunes. When compared to their grace gliding through the water, a trip up the beach is clearing a gruelling trial  for nesting turtles although, in its own way, just as beautiful.

The next day we had decided on a slower day for Caro to sit on the beach and bake and James to do some more snorkelling. First up was our postponed snorkel from the day before at Lakeside, another nice snorkelling spot, but did not on a par with Turquoise Bay. We quickly made our way back there and James plunged back in to the water for a couple of loops of drift snorkelling. Caro plonked herself down on the beach and cooked for the next two hours, moving only to turn the page of her book (in reality to turn the page of her kindle but this is much less romantic sounding) and do beach jumping photos

Exmouth has been such a highlight of the trip so far. We are both suckers for water anyway but beautiful beaches combined with amazing marine life has put Ningaloo Reef up there with one of our favourite places to be. In fact, we agreed that we probably preferred our experience on Ningaloo to those on the Great Barrier Reef, a sentiment that was reinforced by our next couple of days in Coral Bay, but that’s a story for another day and another post. 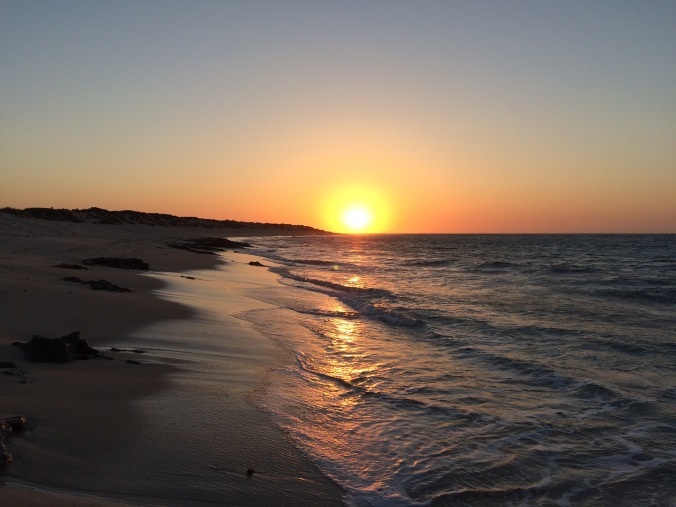