As we had only planned to spend one day in Karijini, we got up early to make the most of our time. We were camped at the Dales Gorge campground, at the eastern end of the park, and our first stop was 5 minutes away in Dales Gorge itself. To be perfectly honest the beginning of the walk didn’t inspire a great sense of excitement, a set of metal steps descending in to the gorge, but we pushed on and were rewarded when we reached the bottom and Fortescue Falls. We knew that we would have to retrace our steps back here shortly so quickly pressed on to Fern Pool, an easy 5-minute walk away.

The pool is beautiful, our photographs do not do it justice, and a small platform has been set up to allow you to get in and out easily to swim. As all we had done was a walk down a set of steps, we felt that we hadn’t earned our right to swim so made our way back to Fortescue Falls, which are really, really cool. They are like a set of steps and look as though an ancient ruin has been reclaimed by the water. It is a rare pleasure to be able to access the top of a waterfall, where you can sit on the warm rocks whilst the water flows past you. 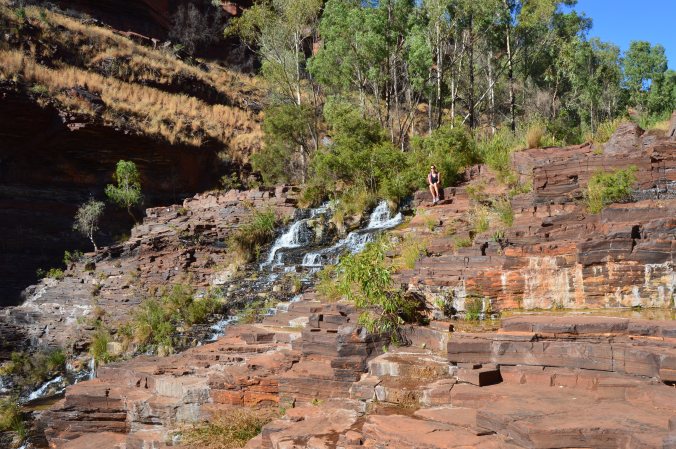 2 minutes on the gorge trail confirmed to us that this was exactly the walk for us. Firstly, you have to clamber down the falls and along a wall that is literally alive.

Once again, our photos are insufficient to capture the reality. The wall of rock rises up beside you extending to at least 5 metres tall, it drips continuously water, is completely covered in plants and flowers and practically pulses with life.

Secondly, you have to cross the bottom of the falls in order to continue on the trail. We particularly liked that at no point are you actually told that you need to cross the water, there is simply a trail marker on either side of the pool and you are left to make of that what you will. 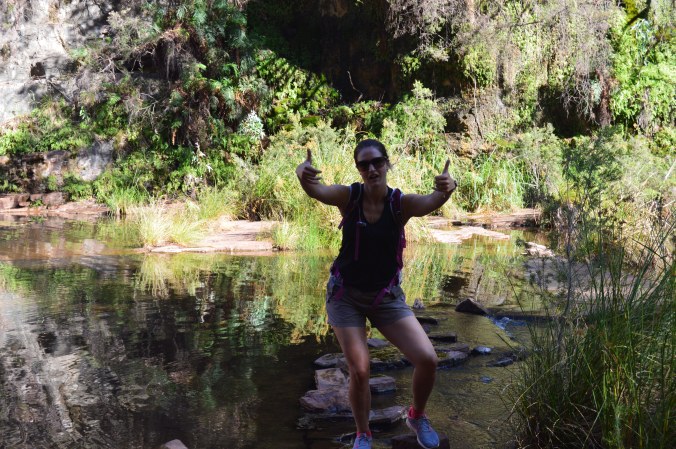 The rest of the trail followed a similar vein with us clambering over boulders and climbing the sides of the gorge. Caro lead the way along the trail and earned herself the nickname Sherpa Chicken. 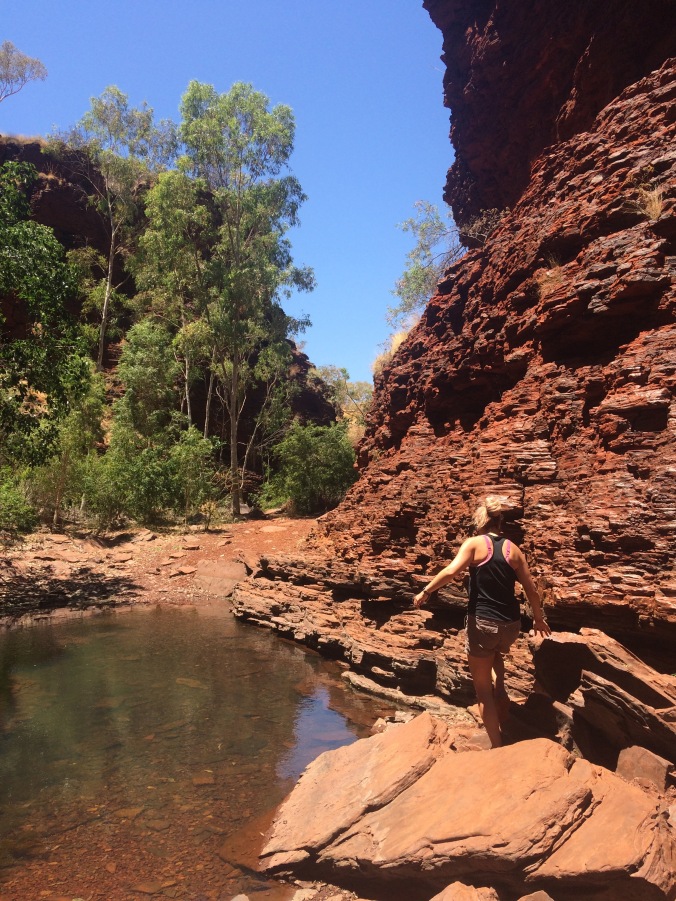 The whole walk was fabulous and helped tremendously by the fact that there was plenty of water in the gorge with the result that the whole place was far more vibrant than any of the parks we’d visited recently.

The many steps down at the beginning of the walk could only mean one thing and, having thoroughly enjoyed ourselves, we were faced with a steep slog back up the side of the gorge. The increased heat of the day was delightfully accompanied by leg and lung burn. 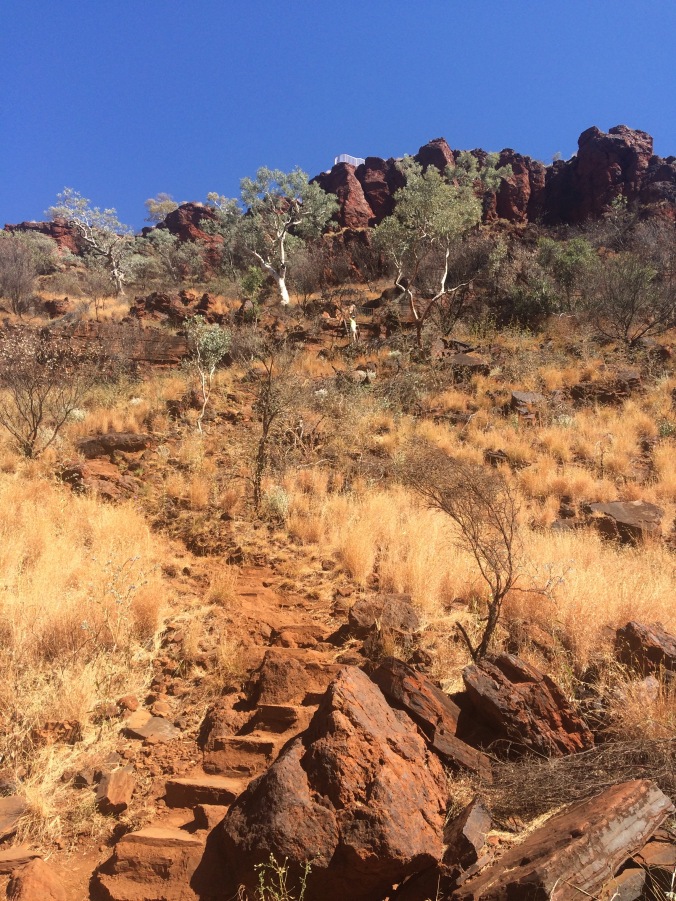 (James is waving somewhere from the middle of that photo). We made it to the top and the rewards of flat ground and a cracking view. 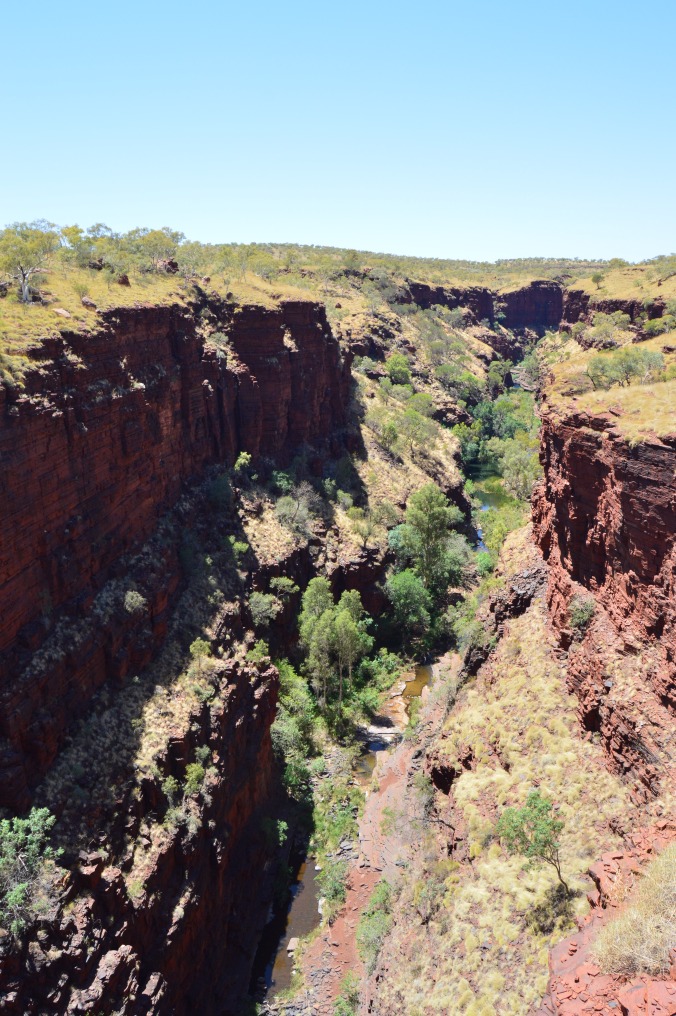 Having explored the eastern end of the park we saddled up Heidi and made our way over to the western gorges. We tried to go to Kalamina Gorge but the road was so rough and corrugated that we wimped out and turned back in favour of gentler roads. We briefly hopped out of the car to admire the viewpoints at Joffre and Knox Gorges, both were impressive, but with our legs still heavy we were not feeling up to the tracks down to the water.

That being said, the temperature was steadily reaching that of Hades and it was very much time for a swim, which brings us to Weano Gorge. One of the travel bloggers that we follow had recently posted about Weano Gorge and specifically Handrail Pool, which James had read and said it was a must do for a swim. Caro took a little convincing, being as she was, perfectly happy sat in Heidi’s air-conditioning.

The trail sign showed that the track was Class 5, indicating that it was only for experienced bushwalkers and robust footwear was required. So, off we set in our trainers thinking that we should have probably gone the whole hog and put our walking boots on, but rationalising that, with Sherpa Chicken for a guide, we were already equipped beyond requirements. We needn’t have worried anyway as we met numerous people in flipflops on their way back who appeared to still be in one piece. You will find that this is quite a regular occurrence in Australia; the park signs will give advice about appropriate attire and equipment and, on a route where everything short of grappling hooks is supposedly required, you will meet people taking their toddlers along in sandals.

After clambering over boulders and across the water course a few times, we reached a gap between the cliffs which leads through to the descent to Handrail Pool. 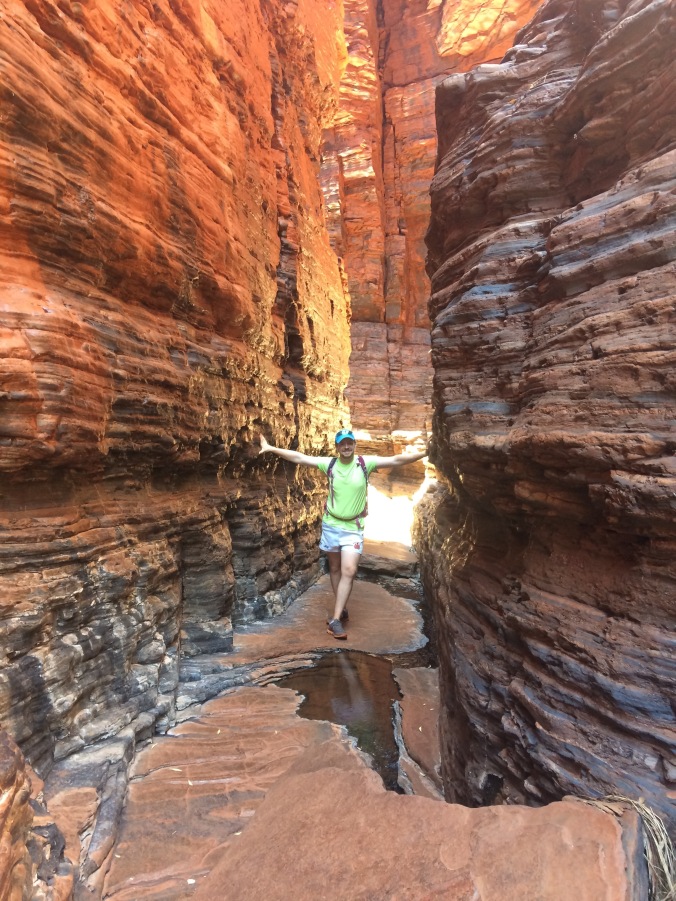 We scrambled our way inelegantly down, performed another of those quick-change acts at the side of the pool and slithered our way in to the water. This was out of necessity as it is impossible to enter the pool gracefully, the rocks around the edge are very slippery and getting your centre of gravity low is key to not falling on your face. James performed a delightful backwards slide on his feet, bent over completely double. When he arrived in the water his face spoke quite plainly that he had no idea how he had gotten in and was dreading getting back out again. It was actually one of the few places where we glad to see other people, watching each new arrival attempting to get in and out of the pool in complete bemusement makes for an entertaining sight. Please do not think us unkind, we did offer advice on the best routes in and out.

The pool is fed by a stream which can be accessed for one end, although the walking trail ends at the pool itself. We’re both pretty nosey and were sorely tempted to continue exploring but, as that is done largely from the water itself, and you are advised to wear a dry suit against the frigid water, we satisfied ourselves with a quick dip and many photos. 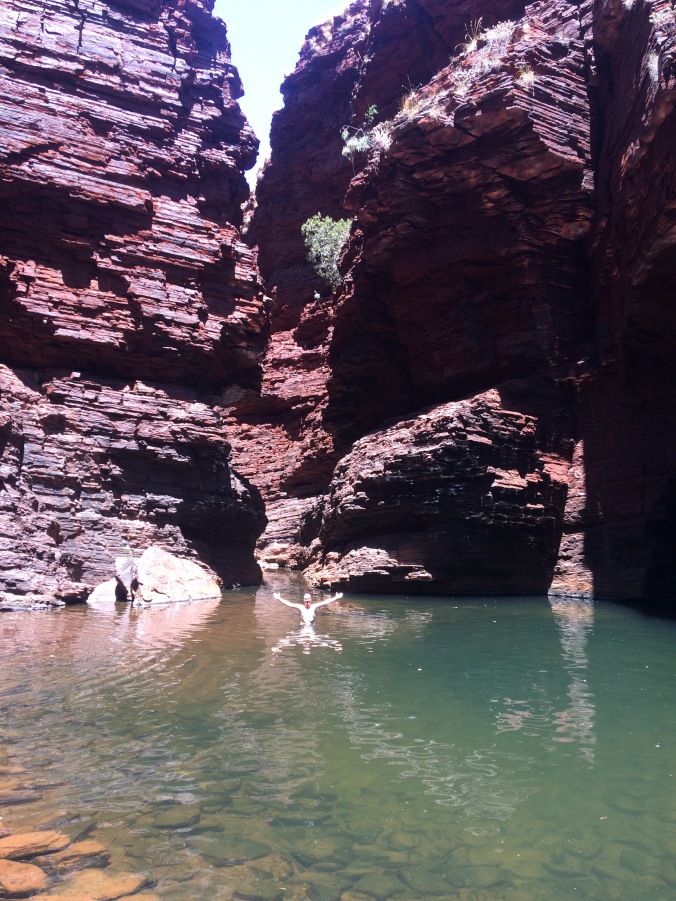 In the short time that we were there, 4 different groups of people also visited the pool. Given that this was in low season you could well imagine that there would be a queue top and bottom to get in and out during peak season. It’s a given that low season will be quieter in general and we have found this everywhere. Despite the fact that our timing has meant that it has been very hot and dry, we would say that on balance it has been preferable to battling the hordes.

We left Karijini fully satisfied that the long drive the previous day had been worthwhile and planned to camp in Tom Price, a town a short distance away which exists largely to serve the mining community. Having arrived and checked in at the visitor centre, we both agreed that we had a little bit more driving left in us and that it would also ease the following day’s drive if we put a few more kilometres behind us. So, we set off west, back towards the coast.

We pulled in to several of the free campsites along the highway, but the heat of the day was still clinging and all we would have to look forward to was a few warm hours in Heidi without the comfort of facilities, so we pushed on further. Please note that the free facilities in general have been excellent and we have both been very impressed by what you can get for nothing in Oz, we just really wanted hot showers that night.

As we made our way further west we could see three columns of smoke billowing up in to the sky, the wind pushing it eastwards. We’d seen the smoke of bushfires before but not the fires themselves. We watched as the pillars of smoke appeared nearer and nearer until we eventually passed the flames along the side of the road. The sheer immensity of the dry landscape and the relentless ferocity of bushfires really brings home to you how utterly terrifying it would be to be faced with an approaching bushfire and not be in control of your escape. 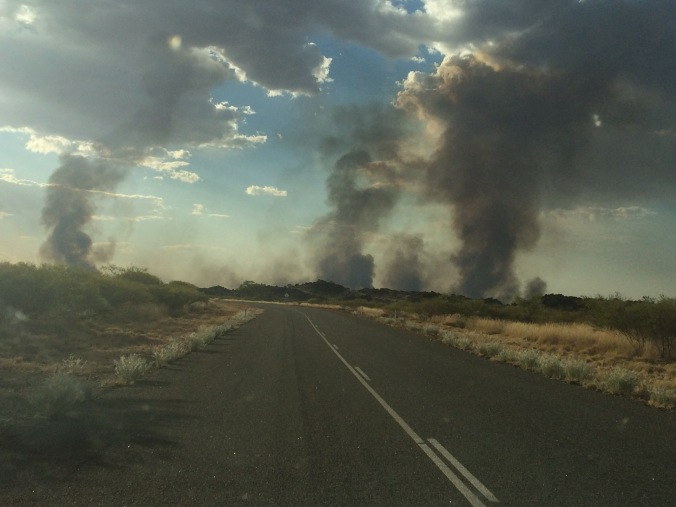 We eventually stopped at Nunutarra Roadhouse, shortly after we had re-joined Highway 1. Upon checking in we were advised of the bushfire protocol (siren goes off, get out quickly) and told to keep our registration information visible at all times for the emergency services. The fire that we had passed on our way there was a very real concern, although the wind was currently pushing it east and away from any human habitation. We enjoyed a cold beer and excellent showers to wash off a few days of accumulated dust and dirt from the National Park.

Time for another shout out; Nunutarra Roadhouse has air-conditioners in its bathrooms. This is, hands down, the best campsite facility that we have come across on our long journey through an incredibly hot and sweaty country. If anyone who owns a campsite happens to read this, put air-conditioners in your bathrooms. Caro wanted to wash her hair twice just to revel in the novelty of not getting doubly sweaty post-shower trying to brush it out.

Fortunately, the wind didn’t change overnight and we were undisturbed by fire or sirens. We had one last shower and set off west in search of the coast, Exmouth and Ningaloo Reef.

One thought on “Karijini National Park”