We didn’t really have a plan of how long we would spend in Litchfield National Park and decided to leave Darwin in the early morning and just see how we got on. Caro ran in to James’s shower friend in the kitchen and he advised that the tin mine was well worth a visit and, as he had been bang on about the museum, we made it our first stop. We both enjoy the human-interest side of things, but it does seem to be an area in which the National Parks could be improved. You will find a hundred different signs about trees but at the tin mine there were just two signs and you basically had to walk around and guess what you were looking at. Regardless, it is cool to go and see and only a short detour off the main road as you come in to the park from the north via the unsealed road. 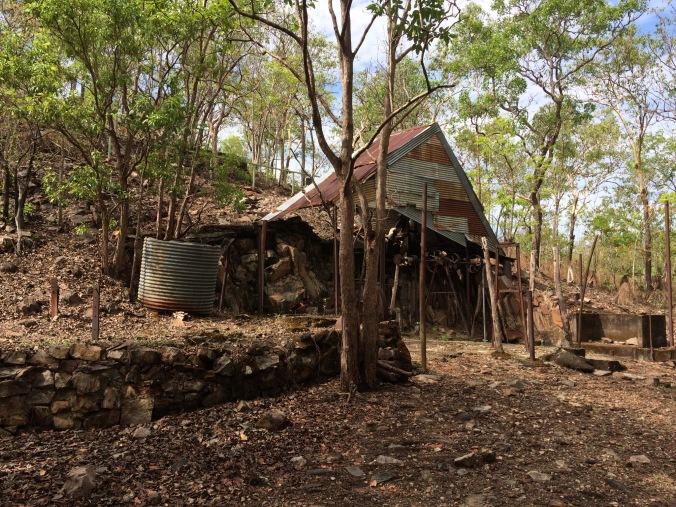 Being the end of the season we knew that a lot of the sites wouldn’t have running water so we decided to give those a miss and head straight to the main site, Wangi Wangi falls. These were flowing but closed for swimming due to a croc sighting in the area. Closing the pool seemed a bit overzealous given that it was a freshwater croc but there you have it and we decided instead to take the walking / steps trail up to the viewpoint in the canopy of the rainforest. As we made our way up the track we met two rangers coming in the other direction carrying a dead feral pig between them, which they had clearly just shot. We were sorely tempted to take a picture but thought that they probably wouldn’t appreciate that, but we have definitely marked it down as a trip achievement, not something you see every day. It had been shot due to the damage it was doing to the surrounding habitat and its destruction was clear to see as we made our way up the track, a sight familiar to us as it was very similar to the effect the French boar have on Caro’s parents’ lawn/croquet pitch.

From here we started to make our way to Sandy Creek and this is a good moment to point out something that we have noticed across the board in Oz; the advertised distances in National Parks are all wrong and cannot be trusted. Our map said that the turn off was 7km down the road, the sign on the side of the road said 10.5km and the reality was more like 12km. This is not restricted to National Parks; you will also find that a turn off a main road will be signposted for 500m but in reality is 20m away, this can be quite confusing and lead to many conversations like this:

Person A: I think that was the turning

Person A: Yes, but that sign we just passed was to where we wanted to go

Person B: Well there must be another turning further on

Person A: That sign said the next turning is in 275km

Person B: *Performing massive and cumbersome U-Turn in vehicle unsuited to this manoeuvre* This bloody thing/place better be bloody worth it

It really is something of a miracle that we have made it anywhere. We did, however, and at Sandy Creek we walked the 3km round trip to the falls there, another beautiful spot. We were preceded down the track by a chap carrying a can of beer in stubbie holder and were forced to accept that we just aren’t doing Australia quite right yet.

We paid a visit to Blythe Homestead on our way back to the main park road. Blythe Homestead, a former cattle farming outpost is another place that is really cool and actually does have a lot of information in a book inside the homestead. Unfortunately, the homestead is fairly dark, making the book hard to read, and is inhabited by the largest and most evil looking wasp we have ever seen. We departed swiftly. We would definitely advise that you go for a visit, just bring a torch and a fly swatter with you.

The track up to the homestead is 100% a 4WD track and the one place, so far, that we have found ourselves wondering whether Heidi could make it. It turns out that she could with a bit of careful handling and Caro project managing from outside the vehicle.

Our next stop was another waterfall, Tolmer Falls, and definitely worth a look in. The walk is a short distance from the carpark and the view of the falls is really rather special, with excellent views south across the park.

The rather enticingly named Lost City was next on the agenda and the route there prompted another of the conversations above as the track felt at least twice the length of the distance on the map. Once again, we were glad that we had persevered. The site is a collection of sandstone formations which have the eerie feel of an abandoned city, the place is aptly named. We both loved this place and not just because it was something other than a waterfall. It was very different to anything that we have seen so far and reminded Caro of camping trips in the deserts of Saudi Arabia. We observed that it would be a child’s dream of a place to hide and play make-believe, although any parent would be mad to allow this given the many thousands of things that can kill you in Australia.

We retraced our route along the track and headed for Buley Rockhole for a swim after another warm day. This is actually a selection of calm rock pools connected by cascades of water and are beautiful for a relaxing dip. Caro, who hadn’t intended to go for a swim, was unable to resist and performed an awkward Mr Bean-esque costume change on the side of the rock pool.

There is a stop advertised on the way out of the park to see termite mounds. This didn’t appeal to us hugely as termites are gross and we have seen thousands of the mounds in our many kilometres of driving. You have to drive through the site to get out of the park and, whilst we wouldn’t go out of the way to see them, they were fairly impressive with some being in excess of 2 metres tall.

We had not made a plan on where to stop that evening, just that we would head back towards Katherine and see what we came across. We ended up stopping at the Adelaide River, where the campsite was conveniently located behind the pub, the Adelaide River Inn. This was a great call as the pub is an absolute treasure trove. Firstly, the bar has an enormous stuffed croc outside and there’s a stuffed Buffalo which, when alive, had featured in the Crocodile Dundee Films.

Having ordered our first drinks we were asked if we would like to enter the Friday night meat raffle, which of course we did. The raffle was run by the local fire brigade master, and James’s new style guru, pictured below.

Unfortunately, we did not win any meat, but we rounded off a great day with a few beers and some excellent people watching.

One thought on “A tin mine, a feral pig and a meat raffle… Litchfield National Park and Adelaide River”