We left Lawn Hill, splatting flies unceremoniously against the windscreen, and headed back towards the Savannah Way in anticipation of a long day’s drive. With several routes available to us we naturally decided to take the slightly ropey looking 4×4 track. We were rewarded 40km later with a locked gate and were forced to return to the infinitely more sensible and boring highway.

By mid-afternoon we had arrived at Hell’s Gate Roadhouse, so named due to the gap in the escarpment that the road runs through. It truly is in the middle of nowhere, with very little in any direction for several hundred kilometres. We considered pitching up for the night but it was extremely hot and there wasn’t a lot for us to do so we figured we may as well push on through the nothingness, out of Queensland and in to the Northern Territory for the first time. We refuelled Heidi with extortionately overpriced diesel and ourselves with the aussie delicacy of pies and settled in for a long haul on unsealed roads up to Barroloolla.

The next 4 hours were the hardest driving we had done; large stretches were so severely corrugated that we were reduced to driving 10-20kmph and the changing light made the road very difficult to read. We arrived in Barolloola well and truly shaken up and checked in to the only campsite in town just as darkness fell. We swiftly set up the camp, inhaled some food and went to bed as early as possible.

We have a rule not to drive at night due to the roadkill risk and, having nearly broken this to make camp, we decided to give ourselves a break the next day and get drunk in a swimming pool. Now, it hadn’t strictly been our plan in the morning but that is certainly what ended up happening. We were up and out early as usual and drove just over 200km to the historic and very cool Daly Waters Pub. 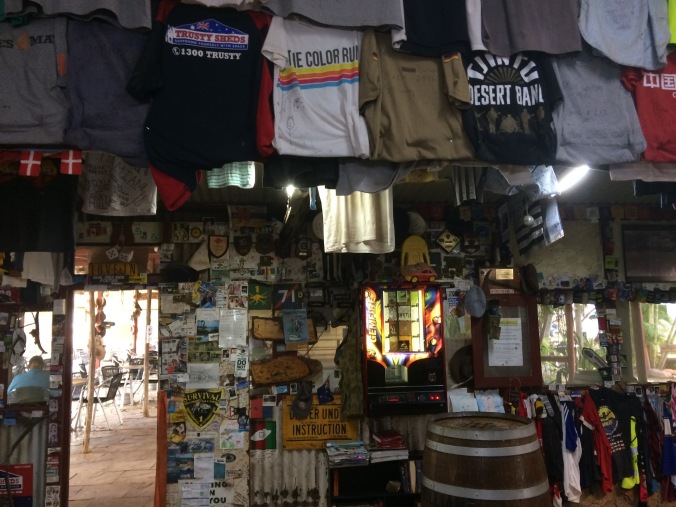 This is yet another drinking establishment which favours the backpacker style decoration of bras, footie shirts, hats, student cards and the odd bit of redundent farming equipment. We added of our Rolling Stones blog card to the collection and spent the remainder of the day sitting in the pool and drinking beer. Caro had the excuse of actual necessity to add a stubbie holder to her collection of memorabilia. 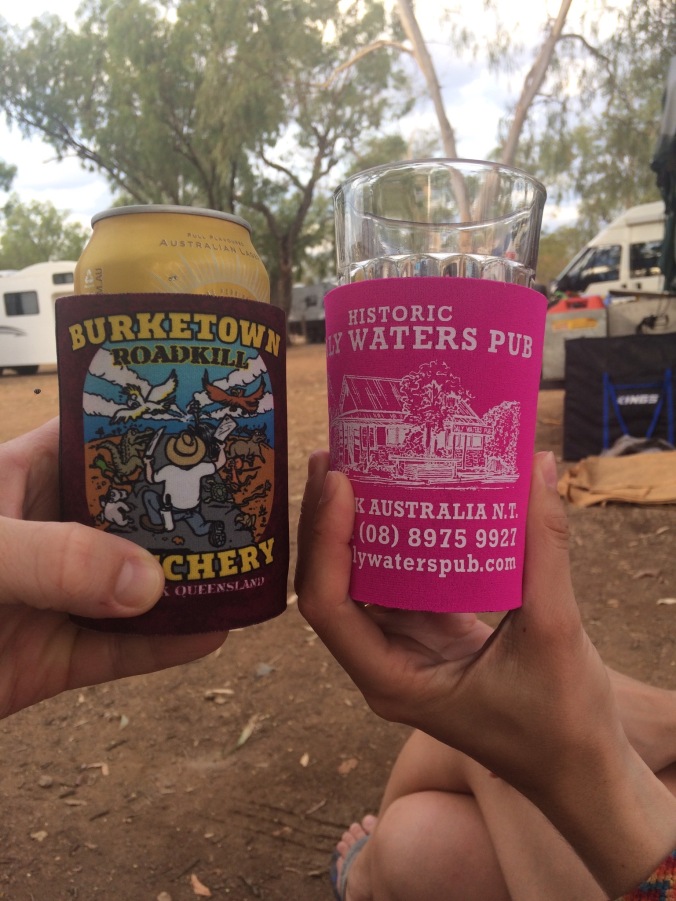 This continued in a similar vein through the evening, accompanied later by an excellent meal in the pub, and made for a fairly steady start the following morning which was made all the more enjoyable by the necessity of eating packet noodles for breakfast because we had run out of food.

Being, as we are, not unaccustomed to a hangover, we managed to drag ourselves out of the campsite by half 9 and get back on the road with our sights set on Katherine. Our first stop was just outside Daly Waters to see the Stuart Tree, a spectacularly crap tourist attraction which we loved for that very reason and urge everyone to visit and post glowing trip advisor reviews. A bit further on, requiring some kind of sugar intake, we stopped at Fran’s Devonshire Teahouse in the most un-Devonshire place on the planet, Larrimah. After the Stuart Tree, our expectations were high and not disappointed by the Teahouse / Sign Shop which didn’t have any pastries but did have this fantastic sign outside: 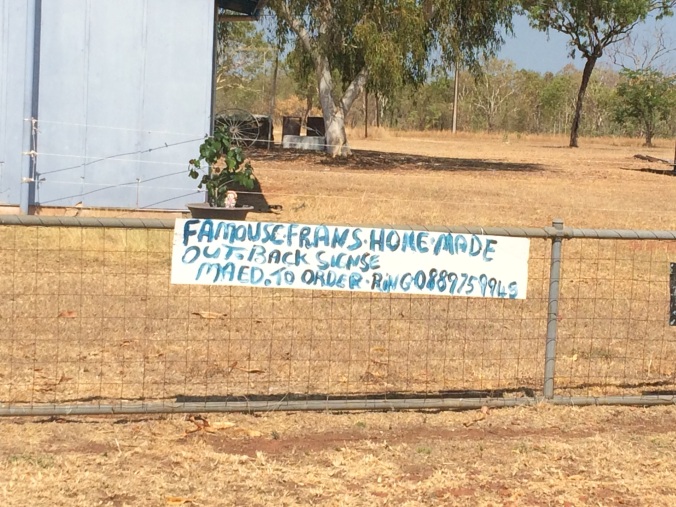 In all seriousness, Fran’s provided Caro with some much needed delicious homemade gingerbeer (Non-Alcoholic!) which allowed her to continue driving.

Further up the road we stopped at the Mataranka thermal springs to flush off the cobwebs from the previous night’s excess. The pools are lovely, situated in a rainforest filled with bats. We sat, soaked, failed at some underwater selfies and all was well with the world again.

Much to Caro’s amusement James was shit on by a bat on the way back to Heidi and had to nip back to the pools to wash it off. Feeling revived we piled back in to Heidi to finish the journey to Katherine to be greeted by this… fabulous.